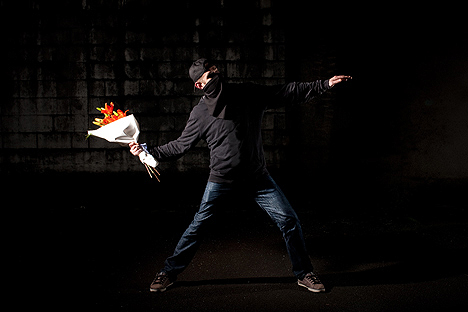 New Zealand native Linda Radosinska takes her photography to the streets in Exit Through the Thrift Shop, a stunning series of Banksy-inspired images. Carefully staged in parks, stores, alleys and more, these shots add depth and dimension to the work of that most infamous of English graffiti artists. Linda reflects on this project and what comes next in the following interview with WebUrbanist: 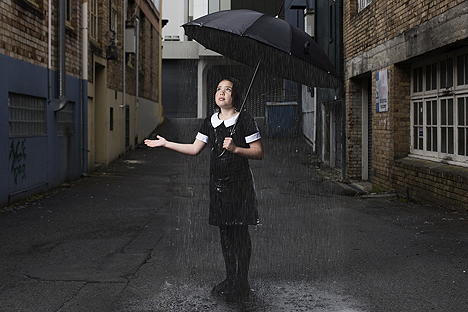 1) What was your moment of inspiration for this project?

It was around October of 2010 and I had been trying to think of an idea for a new project for a few weeks. I went out walking one day and I remember wondering to myself what it would look like if I brought a few of Banksy’s stencils to life with real people and things. Over the course of the next few months, it just sort of grew from there. 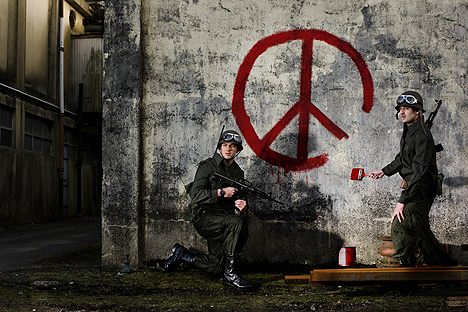 2) As a photographer, what was it about this project that was engaging enough to put great time and effort into staging each shot?

Being such a big fan of Banksy’s work, I was really excited and inspired by whole idea of it; the images I could see in my head were the most exciting part for me, I sort of used that as a goal post to work towards and it really challenged me to do my best. I also felt like I had a responsibility to treat his work respectfully instead of just hacking together uninspired photos of people in costumes, so that really pushed me both technically and creatively to try my hardest and produce these images to the highest standard that I could. 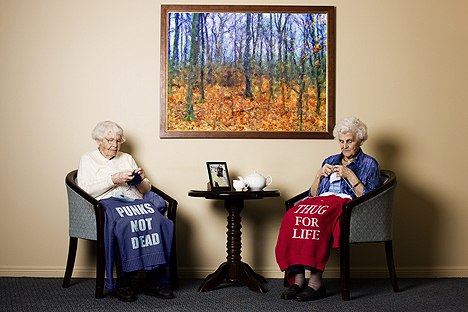 3) Do you feel like doing this project has enhanced your understanding of Banksy’s work, and if so: how?

I’m not sure if it’s enhanced my understanding of Banksy’s work, but it has certainly given me an even greater appreciation of his skills as an artist. His ability to create powerful images that comment on complex issues with nothing more than a can of spray paint and bit of cardboard is pretty amazing if you really stop to think about it. 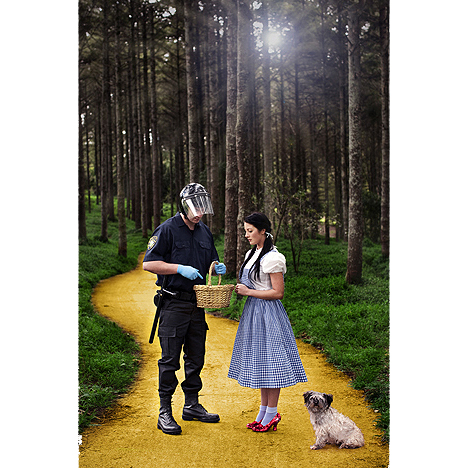 4) Banksy calls you with verification he is who he claims to be. What one question do you ask him?

I would ask if I could see something he’s working on at the moment, I’ve never seen a real Banksy piece in the flesh before, so that would be pretty special for me. I’d also tell him I was a huge fan of his work and thank him for creating so many amazing pieces for us all to enjoy.

5) Banksy shows up the night before your solo show, breaks in and creatively alters your work inside the gallery and how would you feel about it?

I would be really excited about it … unless it was like what he did to Paris Hilton’s album cover. 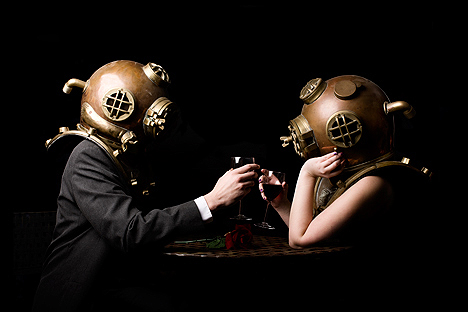 6) The subject of this project is raw, untamed, site-specific graffiti – your mode of capturing it could be considered in contrast: controlled, framed, and location-independent. Did this occur to you in the process and, if so, do you have any thoughts on the differences between your work and your subject matter, or the relationship of street art and photography in general?

I don’t know if I would consider Banksy’s pieces to be raw and untamed; a great deal of thought has been put into the concept for each piece and its execution, right down to the realistic lighting and shadows. You could probably say that brainless tagging is raw and untamed, but Banksy’s work feels careful and deliberate, he does colour within the lines after all. So, in that respect I don’t feel like the process of creating street art of this nature is very different to the way that I approached photographing this particular project. 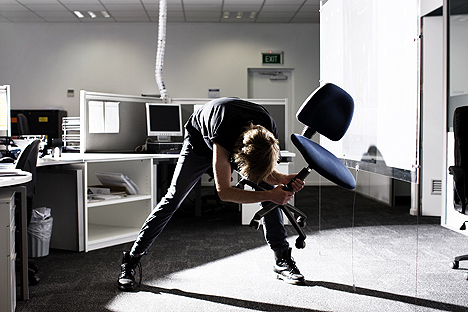 7) What are you working on now (or: are you planning to work on soon), and to what extent has this project reshaped your approach to photography in general (or choice of subjects specifically)?

My next project is going to be completely different to this one; I will be shooting a story, which I am in the process of writing at the moment, and it will be presented as a book when it is complete. I’ll probably have another small exhibition when it’s all finished, just to introduce people to the work and display a few of the final images. It’s going to give me the chance to get some more landscape photography back into my work, and try some new things. Unfortunately, I will need to do some fundraising before I can start shooting anything though, because it’s probably going to cost me quite a bit to produce.

The ‘Exit’ project has had a pretty significant effect on my photography; not only has it made me a better photographer and retoucher, but it has made me strive to say more with my images. It’s shown me that your best work comes when you really stretch yourself to try and create work that challenges and inspires you. It’s kind of blown the lid off any limits I had of what I thought I could do with photography.

Visit Linda’s website for more of her wonderful work from this series and to watch for future updates!