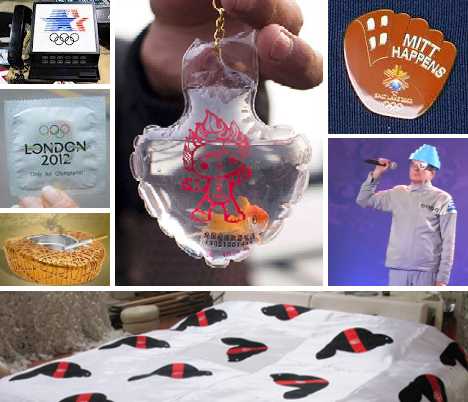 “I went to the Olympics and all I got was this lousy… what IS that thing, anyway?” Most anyone would agree the best souvenir of a Summer or Winter Olympic Games is a medal – preferably gold – but only a few bring back the ultimate reward. The rest of us are stuck with mundane memorabilia like these 10 tacky Olympic souvenirs that can’t hold a candle to the proverbial lousy t-shirt. 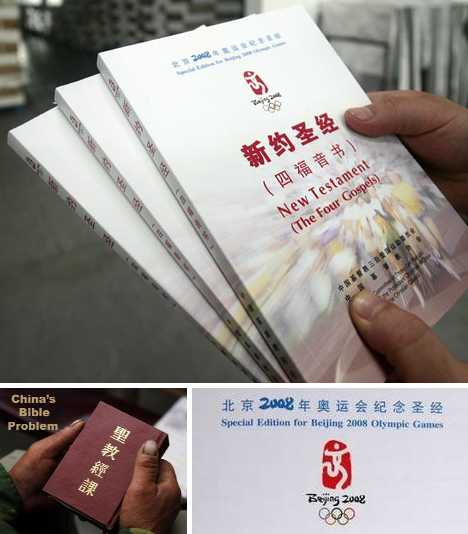 Move over, Gideons, BOCOG (Beijing’s Olympic Organizing Committee) has done you one better by arranging for about 10,000 Bibles, 30,000 New Testaments and 50,000 bilingual booklets containing just the Gospels of Matthew, Mark, Luke and John to be available for athletes attending the 2008 Summer Games. “As far as I know,” stated Rev Xu Xiaohong, an official of the Shanghai-based China Christian Council, “this is the first time an Olympics logo will be used on a religious booklet.” The Bible, brought to you by the good people at Beijing 2008… come early, come often, and come all ye faithful! 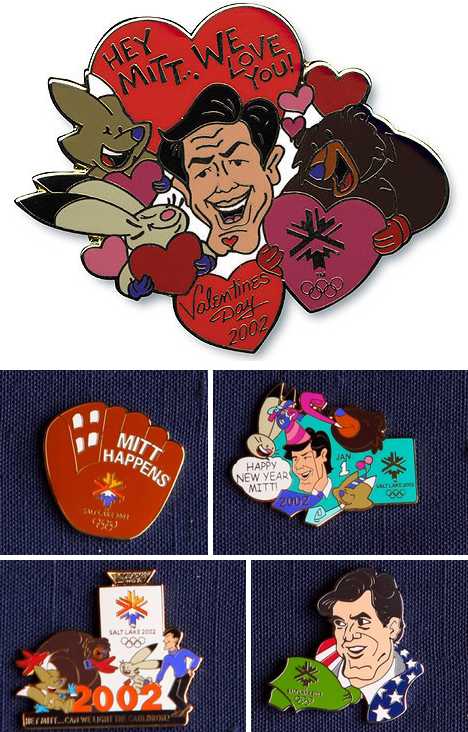 Former Bain Capital CEO and current U.S. presidential candidate Mitt Romney was hired as the new President and CEO of the Salt Lake Organizing Committee in the wake of a 1998 bribery scandal that threatened to sink the Games. Did Romney pat himself on the back, so to speak, by approving a series of Olympic pins that extolled his various and sundry virtues? Like the made-in-China pins, it’s an accusation that sticks. 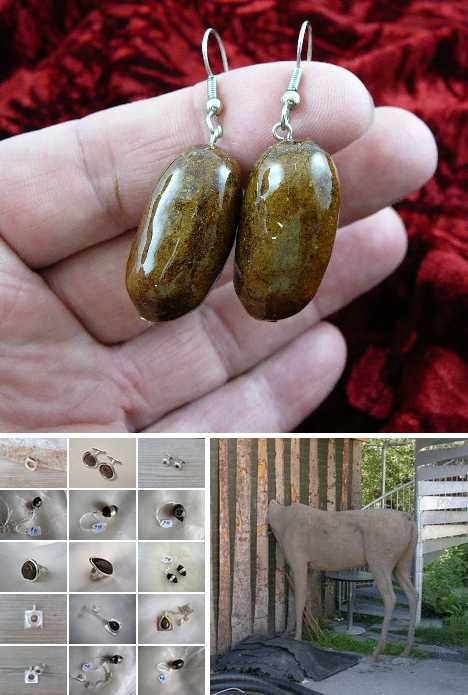 When life gives you lemons, make lemonade. When life gives you moose poop, make earrings! It made perfect sense to local artist Tore J. Haugan, who found himself with poop on his hands (figuratively speaking) when record snowfalls during the 1994 Winter Olympics in Lillehammer, Norway drove hungry moose out of the forests where they formerly pooped in peace. Haugan sold “treated” moose-dropping earrings like those pictured above for around $20 per pair and they were supposedly very popular with Germans… you know, the guys who always make good stuff. 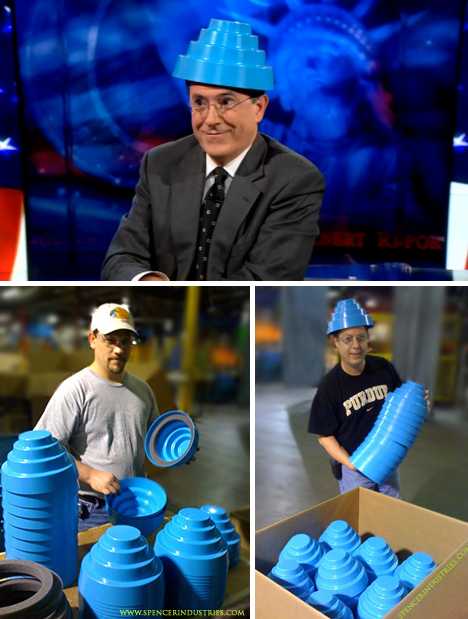 The special edition DEVO “Olympic Blue” Energy Dome would probably rate as the most unusual souvenir of the 2010 Vancouver Winter Olympic Games, after the poster in a Polish newspaper that featured the official Olympic mascots including Pedobear, of course. The domes were worn onstage by DEVO members during a concert and distributed to audience members as well – We are DEVO, after all. 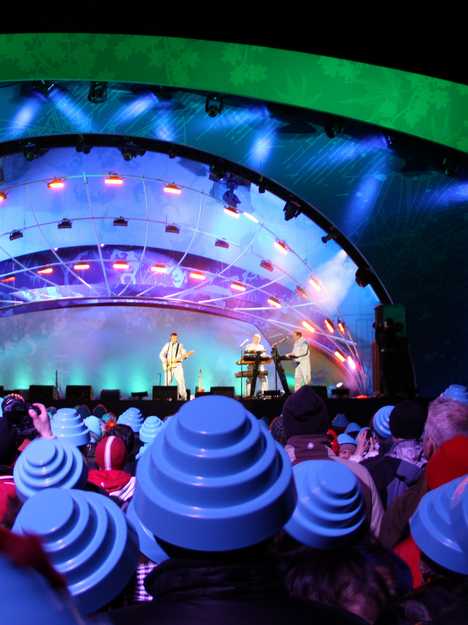 Don’t get me wrong, anything to do with DEVO is undeniably cool… Energy Domes of any color are only lame if used as flowerpots by devolved humans and Spudboys. The Blue (Cyan, actually) Energy Domes manufactured by Spencer Industries Inc. of Dale, Indiana proved to be extremely popular and were offered for sale after the Olympics ended – you can still get yours by ordering online at the official DEVO website. 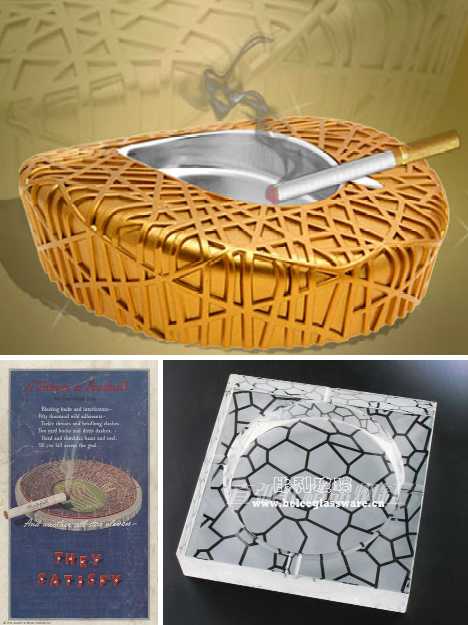 Beijing’s magnificent “Bird’s Nest” stadium was the centerpiece of China’s first Olympic Games, taking pride of place at the memorable Opening and Closing ceremonies. Now you can relive the magical moments just AFTER the fireworks show with the unique Bird’s Nest Stadium Ashtray! Double your smoking pleasure with the Beijing Olympic Games Water Cube pattern crystal ashtray. An original concept to be sure… and by the way, that ad for Chesterfield cigarettes from a 1936 issue of Modern Mechanix is purely coincidental. 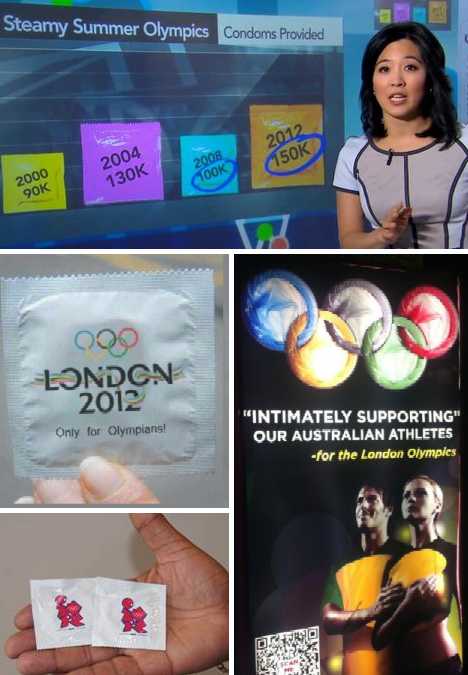 Bringing back official Olympic condoms? Cool! Well, kinda… it’d be cooler if you were only bringing back the wrappers, amiright? What’s uncool, tacky and worse on a number of levels are unofficial, substandard, counterfeit Olympic condoms even Cosmo Kramer’s sketchy pal Bob Sacamano wouldn’t be caught dead wearing. 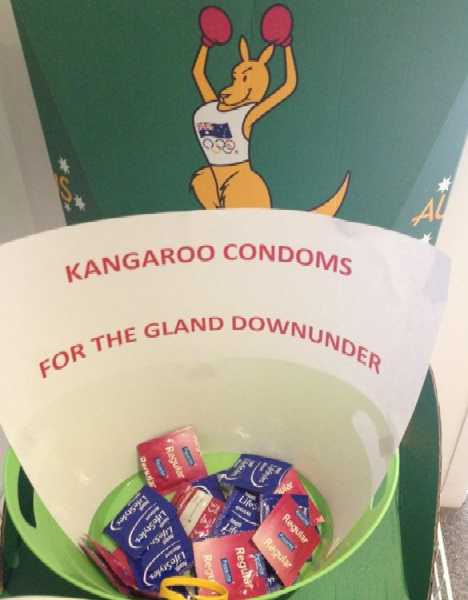 The reliability of condoms is an issue of paramount importance… right behind corporate sponsorship agreements, that is. When shown the image of a bucket of non-approved condoms above, a LOCOG spokeswoman immediately leaped into action stating “We will look into this and ask that they are not handed out to other athletes because Durex are our supplier.” Thanks a lot LOCOG for covering athletes’ backs – and their fronts as well. 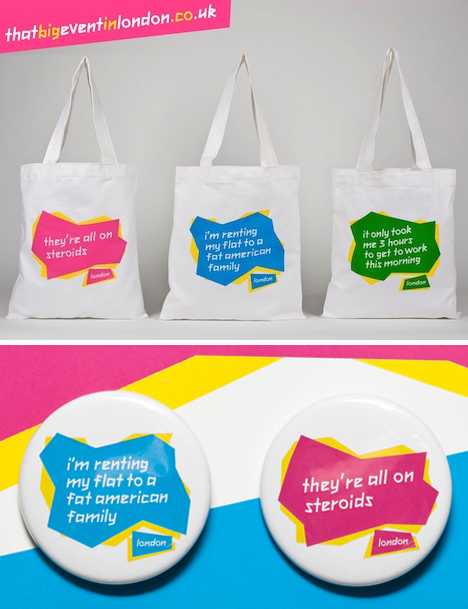 (images via: Design Taxi and That Big Event In London)

Aren’t you glad it’s the Olympics again, and in your home town to boot? No? Then wear your heart on your sleeve, on a t-shirt or on a tote bag from Toby Leigh’s “That Big Event In London” series. The unofficial “reality-check” souvenirs ape the angular look of the official (and much-criticized) London 2012 logo and help harried Londoners blow off a little steam through sarcasm. Non-Brits looking for a little revenge can find it here. 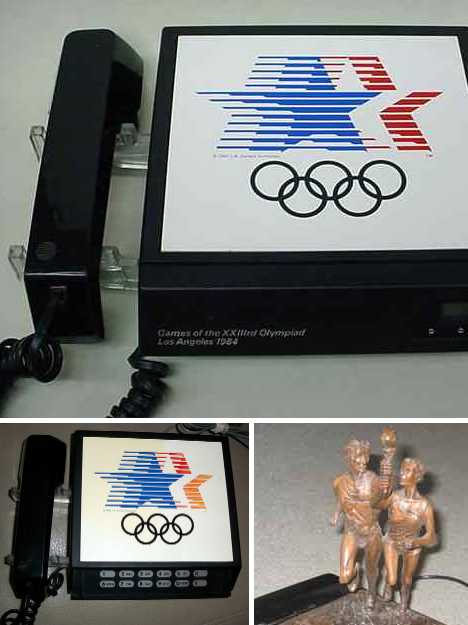 (images via: Gasoline Alley Antiques and The Farmer’s)

What did we do in the dark days before there were mobile phones? One particularly obtrusive answer is the “Showcase Olympic Commemorative Telephone” above. Sold at phone stores and at the 1984 Los Angeles Olympics, the officially licensed phone featured the “Star in Motion” logo and a flip-down front panel covering the number pad. Peter Ueberroth, please pick up the white courtesy phone. 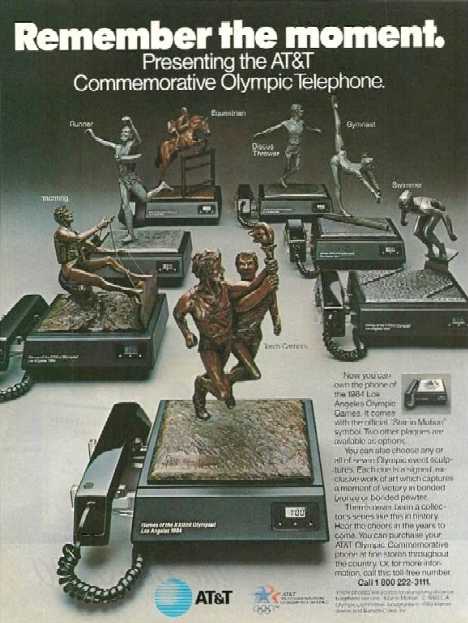 For a slight additional cost ($100 to $150), the above chunky phone could be made even chunkier by replacing the logo plate with one of seven different Olympic-themed sculptures by the late Marcel Jovine. He’s the guy who invented those Visible Man and Visible Woman 3D models from the 1960s. The statues were made of hand-finished, wire-reinforced cast polyester infused with pewter or bronze powder. Collect ’em all! 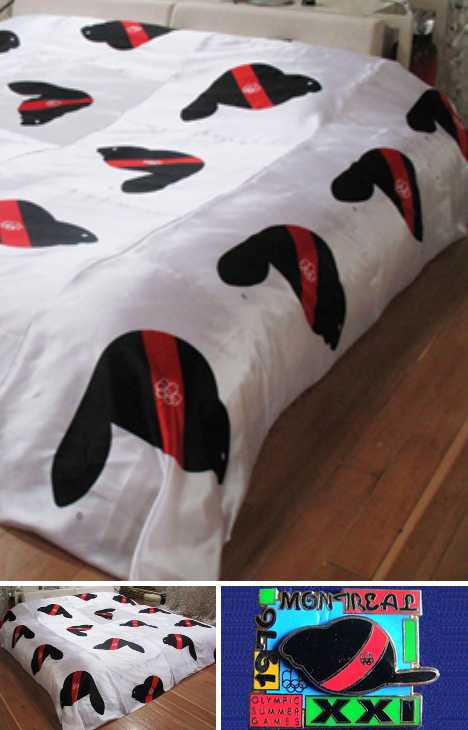 “Amik”, the rather featureless beaver who was the official mascot of the 1976 Summer Olympic Games in Montreal, Canada, would have swiftly and deservedly vanished into the pages of history if not for Ouno Design. Perhaps tired of looking at dozens of Amik scarves about to moulder away completely in storage, Ouno killed two birds (beavers, whatever) with one stone by weaving the scarves into a bedspread. 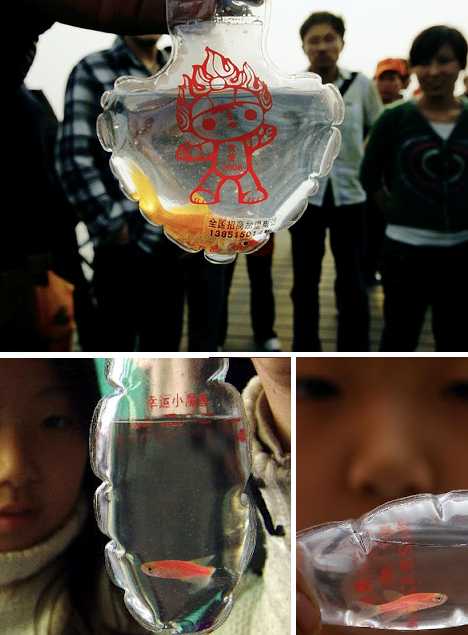 (images via: Weird Asia News and I Buzz About)

Saving the worst for last… won’t someone save those fish? Yes indeed, unnamed Chinese entrepreneurs sold live goldfish sealed in plastic bags bearing an image of one of the 2008 Beijing Olympics mascots to kids in the city of Qingdao. Evidently the practice of selling live animals is legal in China regardless of the packaging and the cruel keychains sold very well. Both China’s laws and attitudes would seem to be in need of an upgrade. 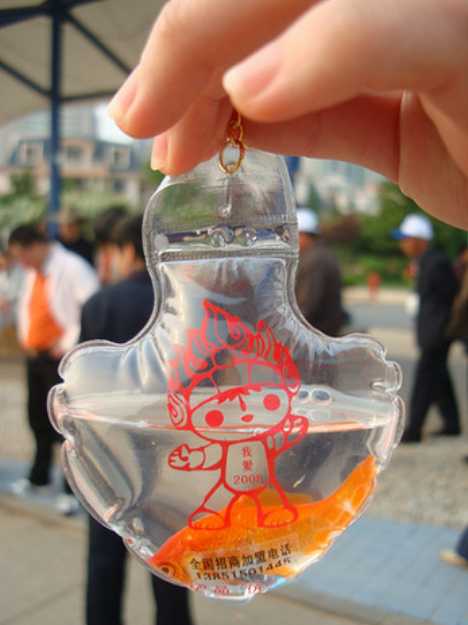 Word to China: You make good stuff, often great stuff. Your factories can copy just about anything we make and sell it back to us for cheaper than what it costs us to make it. So why, WHY, WHY didn’t you make imitation goldfish and seal THEM in clear plastic liquid-filled keychains instead of real fish? At least the fakes won’t suffer, die and decompose before the eyes of traumatized children. Keep it in mind for next time? KTHXBYE! 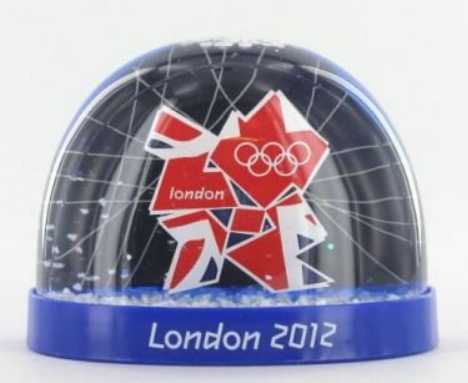 Major international events such as the Olympic Games act as a perfect storm for creators of cheezy, sleazy schlockenkrap (that’s German for “shlock & crap”) like the snow globe above… made to commemorate a SUMMER Olympics. DOH! We can’t wait for what Sochi and Rio have in store, in stores.