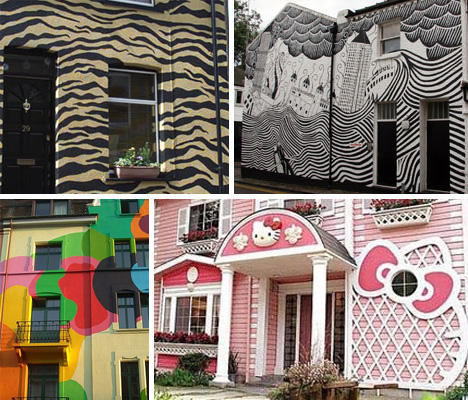 What would your homeowners association say if you were to step way, way outside the bounds of normal home exteriors and do something way creative with your home’s appearance? These people did just that, and their homes have some of the wildest, weirdest paint jobs in the world. 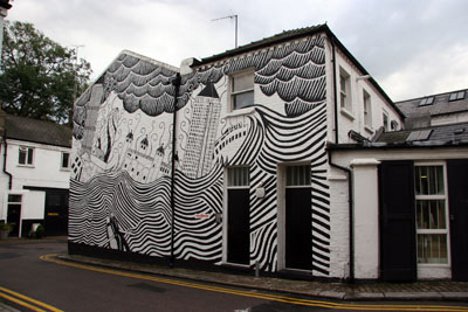 Stanley Donwood, the artist behind some of the most iconic artwork associated with the band Radiohead, has a signature style that is replicated on the side of this home in Ladbroke Grove in England. 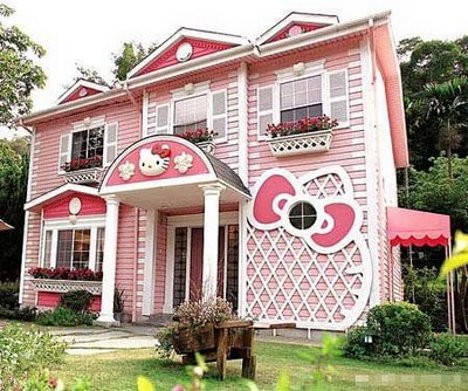 Fans of the uber-cute Sanrio creation Hello Kitty know that the whiskered one can be found on literally every kind of merchandise. This incredible “castle” in Shanghai, China not only features the famous feline and an appropriately pink color scheme on the exterior; the interior is chock full of Hello Kitty accessories and furniture. 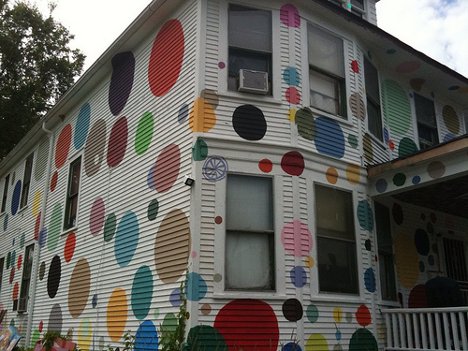 This polka dotted home would be perfect for a resident with a bubbly personality. Its fun multi-colored pattern no doubt draws plenty of stares and smiles as people pass by. 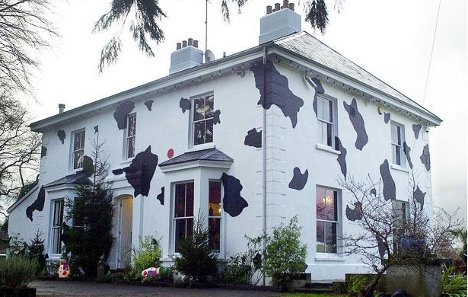 In Usk, South Wales, a homeowner who was extremely fond of the movie 101 Dalmatians decided to create an unusual tribute to the black and white dogs by painting this house white with black spots. They look more like cow spots to us, but we aren’t picky – it’s still an excellently playful paint scheme. 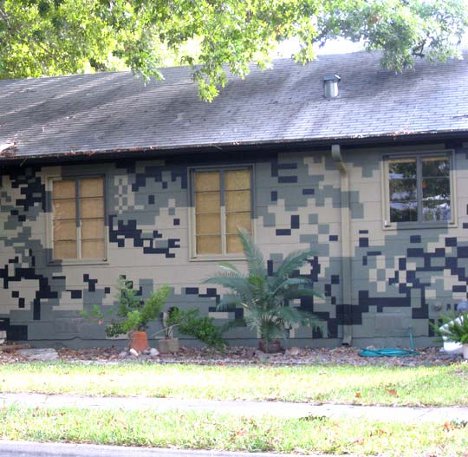 Believe it or not, there is a house hiding in this photo. The Austin, Texas home was painted in the style of the US Army’s Universal Camouflage Pattern, resulting in a home that actually manages to stand out from its surroundings despite its best attempts to blend in. 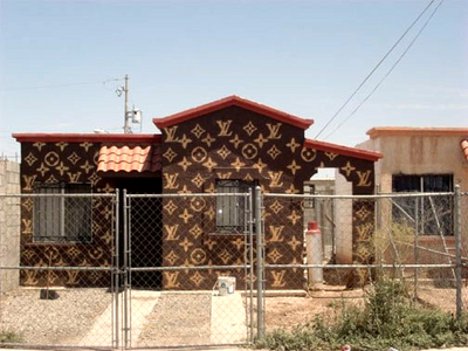 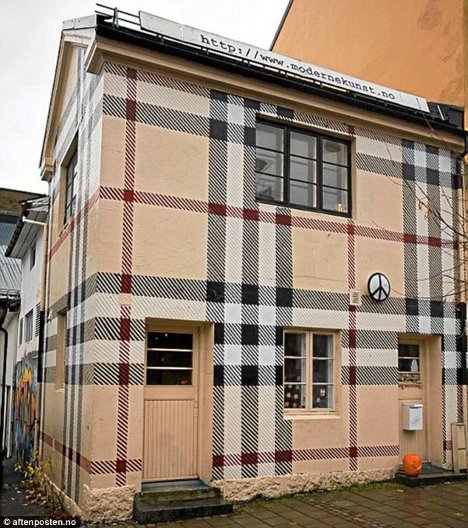 Fans of fashion will immediately recognize these high-profile patterns. The first, a bungalow in Mexico, was painted to look like the logo of the famed French fashion house Louis Vuitton – and then appropriately hidden behind a tall security fence. The second is the home of artist Jans Werner, painted to look like the signature tartan pattern of UK fashion brand Burberry. 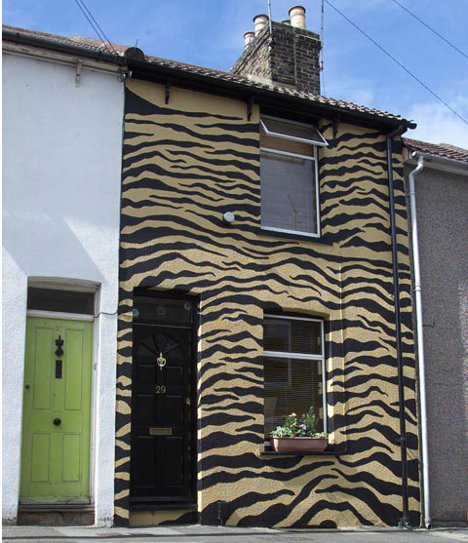 People who paint their own homes in crazy colors or patterns are one thing…but this tiger-striped home was painted by the owners’ friends while the owners were away on their honeymoon. Would you be able to forgive your friends for a “gift” like this? 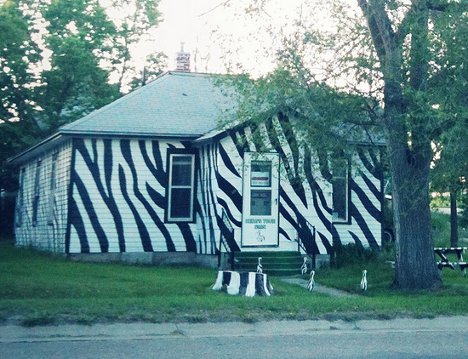 Zebras have stripes in order to blend in with one another and deter predators from attacking what looks like one gigantic animal, but the same concept doesn’t quite work with this solitary house in Basset, Nebraska. 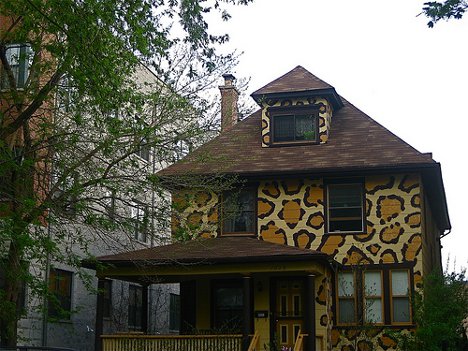 The zebra house might want to steer clear of Chicago, which is where this leopard-spotted house spends its days, lounging in the sun and waiting for an unsuspecting antelope house to wander by. 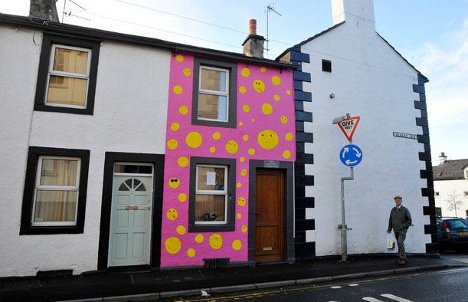 This house in Penrith, Cumbria, England is surrounded by otherwise normal-looking row houses. Its bizarre pink background filled with smiling yellow happy faces sure is weird, but it probably causes a lot of smiles, so it’s hard to find fault with it – unless you live next door, of course. 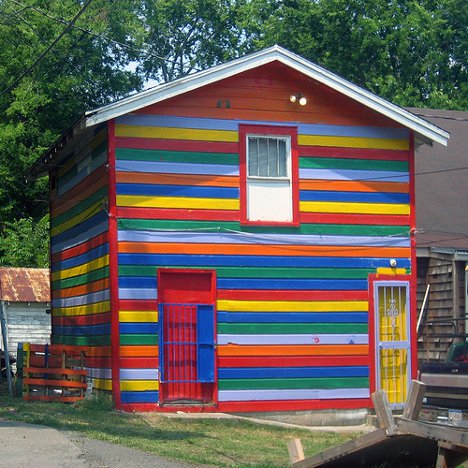 This building in Birmingham, Alabama is technically a garage, not a house, but its beautiful rainbow exterior is so cheery that it warrants inclusion. 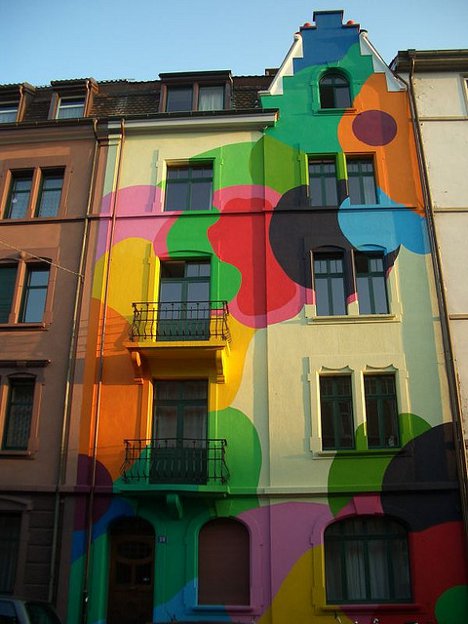 Looking like a gigantic lava lamp, this townhouse in Basel, Switzerland calls to mind the psychedelic 60s – or maybe the carefree days of blowing bubbles in the backyard and watching them float toward the clouds.