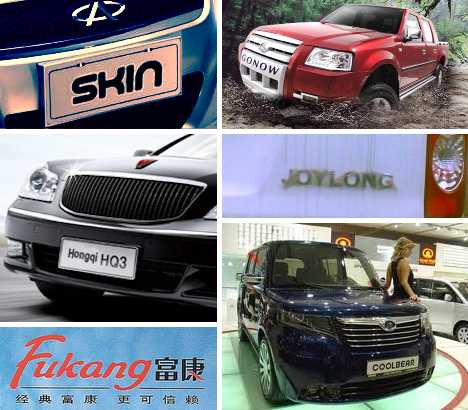 Finding inspiring names for cars isn’t easy, especially when your mother tongue isn’t English and, in the case of China, there are over three dozen automakers looking to proudly dub their chariots. This selection of 10 oddly named Chinese cars may be just the tip of the rice berg but don’t blame us if you’re hungry for more an hour later. 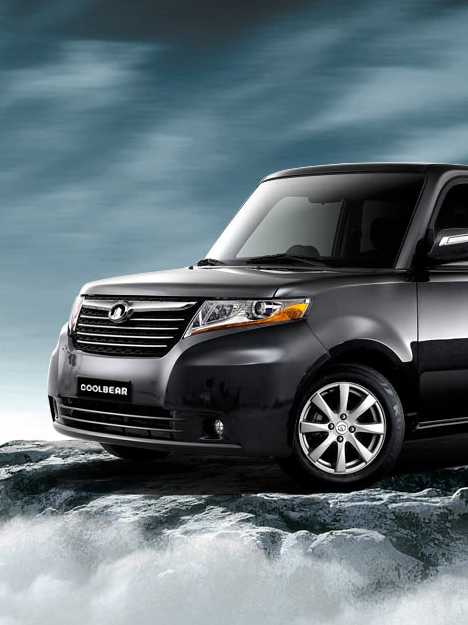 Pronounced “cool-bare” (and not “cool-bert”), this boxy product of China’s Great Wall Motors has more in common with Central Planning than Comedy Central. Even so, it’s a wonder the curiously named minivan hasn’t been brought to the attention of Stephen Colbert, a guy who regularly issues ThreatDown updates on nature’s soulless, godless, rampaging killing machines. 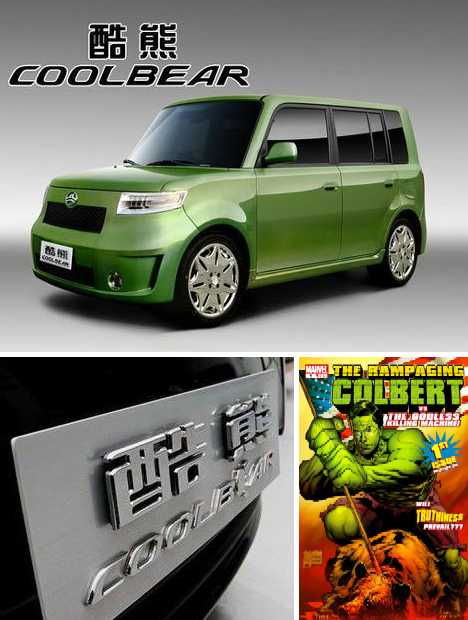 (images via: Nevada and OverAdulthood)

Should the popular political pundit’s fame expand beyond America’s borders, it’s not hard to imagine a special Colbert-edition Coolbear. He might even buy one himself – ladies and gents, I give you Colbert’s Coolbear Colbert. 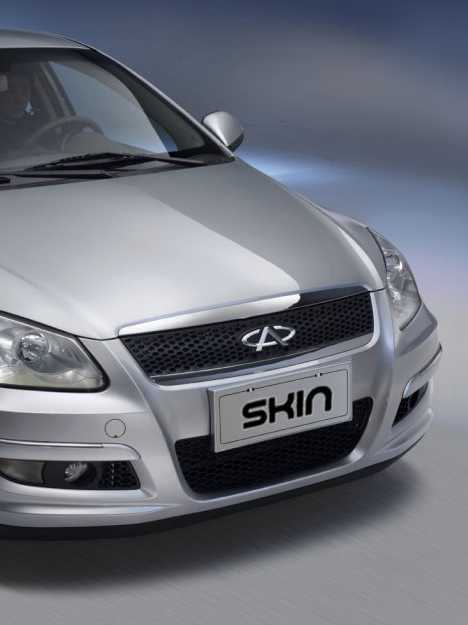 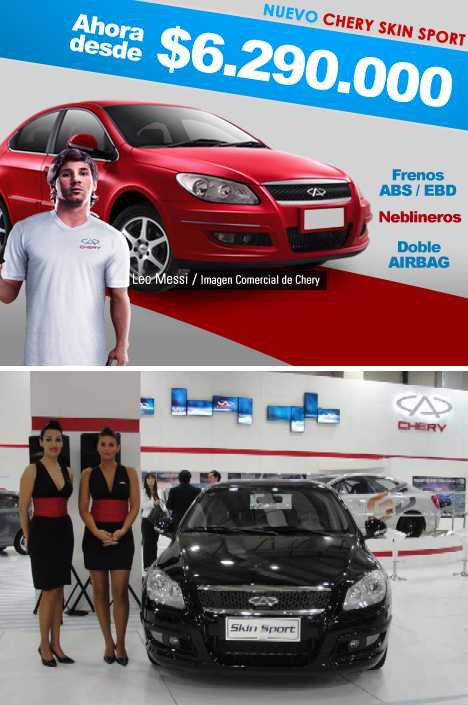 Messi may be exciting, “Skin” not so much… unless you order one in Tan, perhaps. Coincidentally, another of Chery’s cars is called the “Face”. Why such strange names? Maybe Chery’s just scraping the bottom of the name barrel and besides, “Pajero” and “Nova” are already taken. 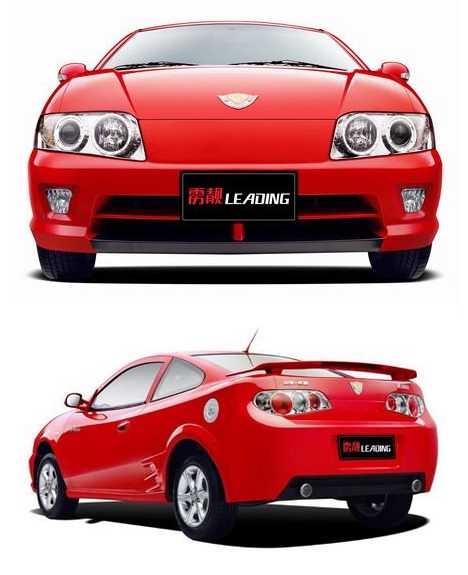 Who knew China makes Lead Sleds? Heavy metal machines like the Geely Leading are Mercury-free at least… at least that’s what one would hope. We’re pretty sure Geely intended the name of their snazzy new coupe rhyme with “reading” and not “sledding” but considering China’s ongoing series of food and product scandals, that’s where we’re, umm, heading. 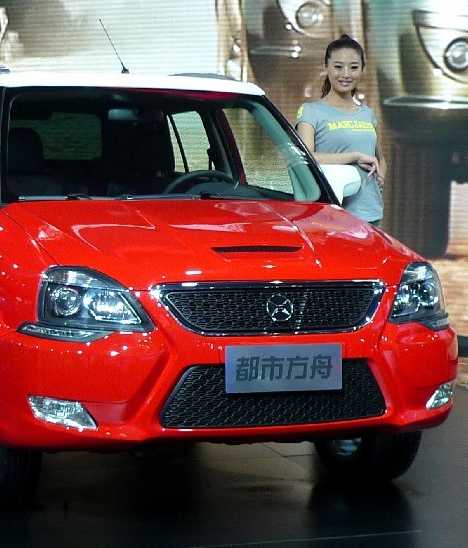 Well whaddya Noah! When it comes to over-the-top automobile names, “Urban Ark” ranks with such humdingers as “Intelligent Bullet” and “Utopian Turtletop” – names considered by Ford in 1957 for the new, nifty, thrifty car that was eventually dubbed the Edsel. Yep, name nimrodism was and is a global phenomenon. 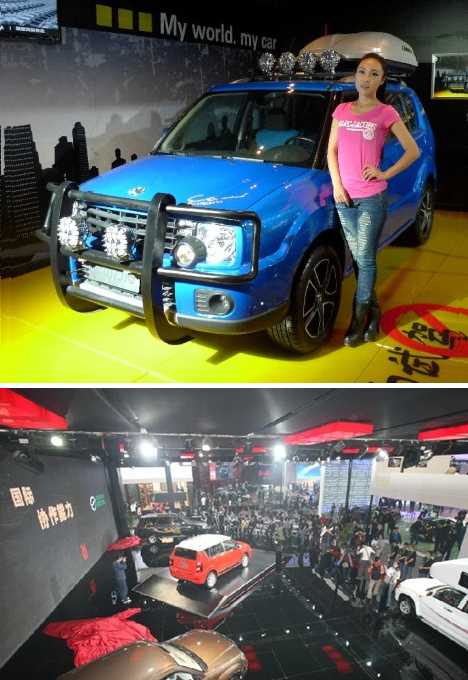 Is it odd that a car that apes the space-saving look and compact size of the KIA Soul is named after an ark? Anyone? Bueller? Let’s give Zhongxing the benefit of the doubt since in the event of a global flood, insects and microbes will probably need an ark of their own. 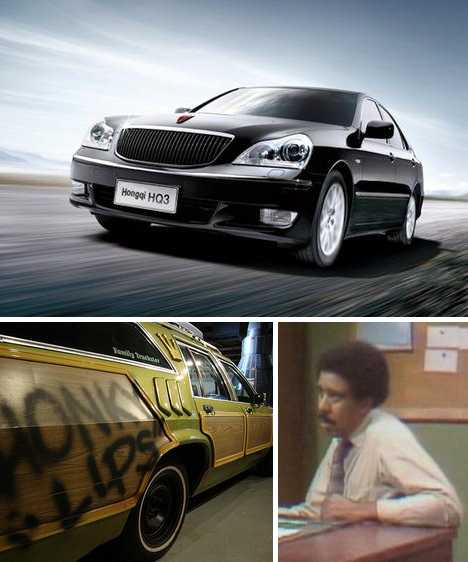 Hongqi means “Red Flag” in Chinese and something quite different in East St. Louis, as the Griswold family discovered on their uncomfortably convoluted road trip to Wally World. The average Hongqi, especially the top-of-the-line HQE model, is light years ahead of the woodgrain-swathed Family Truckster Wagon Queen however. It’s a shame Chevy Chase and the late Richard Pryor aren’t available to star in a new series of ads for the firm. All he’d need to say is “Hongqi… Hongqi Hongqi!” 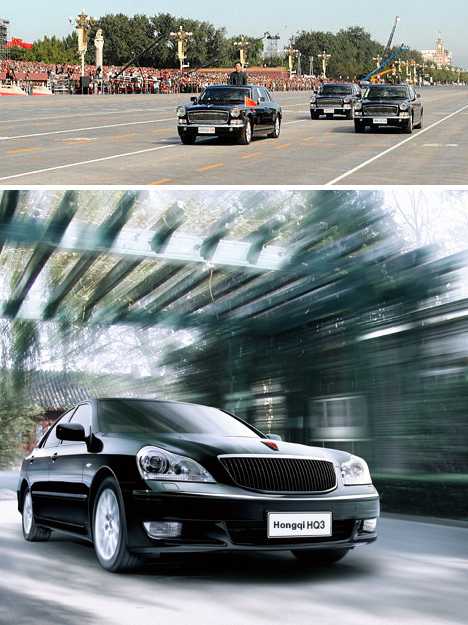 Originally styled after Fabulous ’50s finny Chrysler sedans and more recently adopting the leaner look of Lincolns and Bentleys, Hongqi is the luxury car division of Chinese automaker FAW Car Company and is the traditional ride for China’s political elite. As such, Hongqi cars are almost always black… not that there’s anything wrong with that. 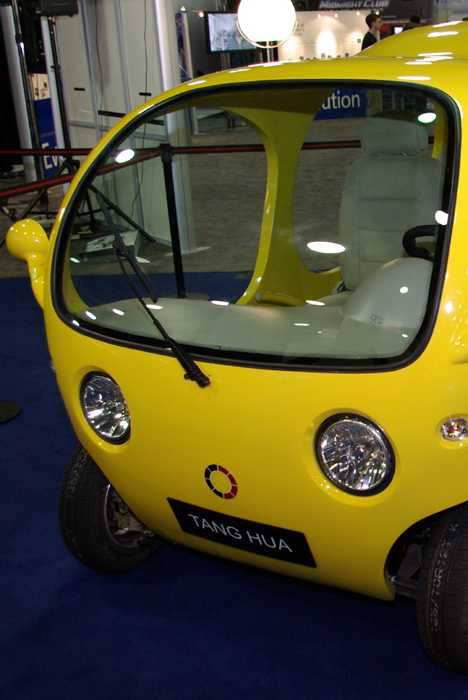 The bulbous yellow vehicle above looks sort of like something that might be found in the Detroit River – all it needs is three headlights instead of two. Actually, someday this “car” really could be found in the Detroit River as it’s an electric amphibious car. Maybe it’s just us, but too many movie crime scenes featuring bathtubs and radios have made the term “electric amphibious” more frightening than the appearance of this car. 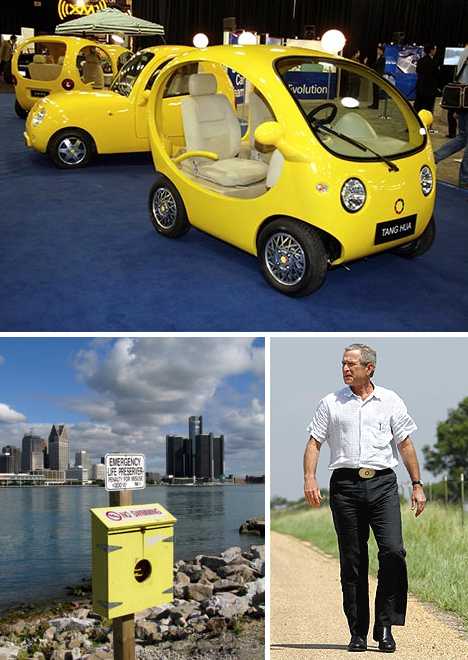 (images via: Bolido, Travel and Transitions and Guardian UK)

We really can’t blame Li Guangming, designer of the Detroit Fish, for its odd label as his plan was to debut the car (and two other variations) at the Detroit Auto Show. Along with the cars, a sign was posted stating the designer/manufacturer would be “Accepting of ordering these cars for the private place and touring scenic spot on the scene. Suggestion: Renowned environmentalists – President Bush, ordering this car for his Texas ranch.” Go for it, Dubya! 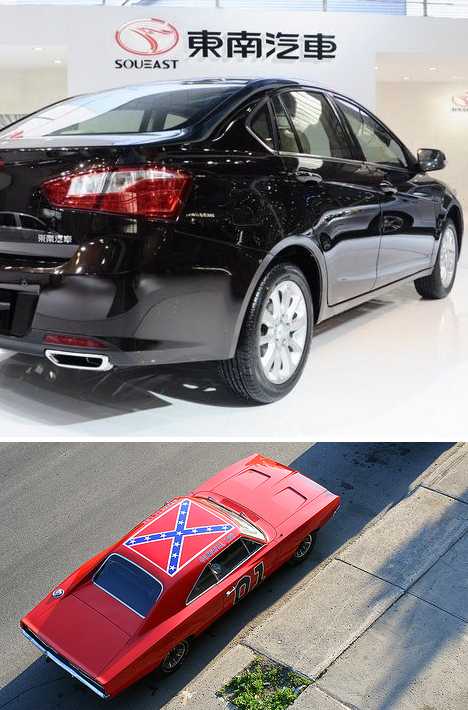 (images via: CarNewsChina.com and Carpictures)

Would cars made by Chinese automaker SouEast sell well in the Pacific Northwest? If so, will they sell even more in, say, Alabama and Georgia? If so, they’ll need to offer an extra-cost General Lee package. Tarnation, the Stars’n’Bars flag would look great on the roof of a shiny new SouEast V5, you reckon? 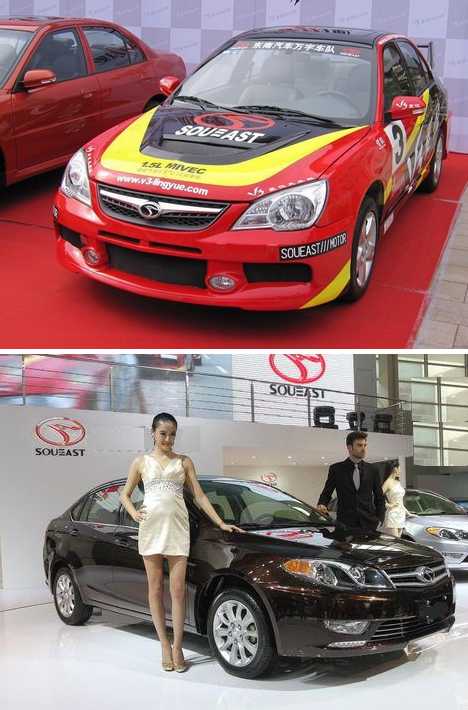 SouEast, officially South East (Fujian) Motor Co Ltd. or SEM for short is a joint venture between China’s Fujian Motor Industry Group and Taiwan’s China Motor Corporation created in 1995, with Japan’s Mitsubishi Motors joining a year later. Talk about strange bedfellows… one wonders if the current tensions in the South China Sea over the Senkaku/Daiyou (or Daiyou/Senkaku) islands will put inordinate stress on the partnership. 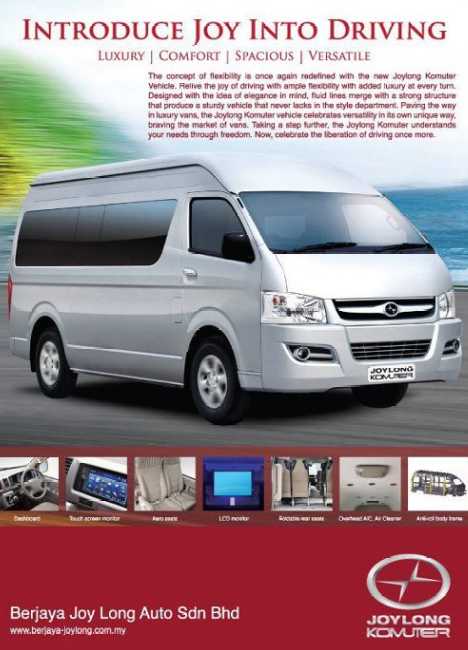 Jiangsu Joylong Automobile Co., Ltd. is a manufacturer of “luxurious, safe, environmental-friendly and comfortable light vans,” all of which presumably are as joyous to drive as they’re long in, er, length. What’s more, when you buy a Joylong, you love it long time… or so a possible advertising slogan might read. And don’t even ask about the “horn-y”, OK? 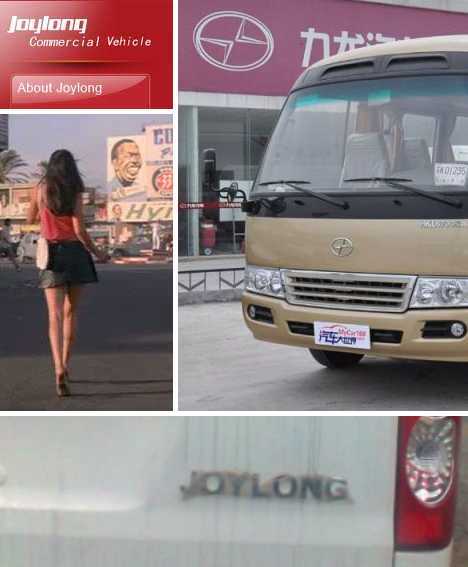 Full Metal Jacket references reluctantly aside, Joylong seems to have found a lucrative market niche in the field of long, longer and longest minivans and minibuses. Their smaller efforts are based on the Japanese market Toyota Alphard – a clunker of a name to be sure but one that carries no other connotations. But back to Joylong: how does the “Joylong Superlong” sound? Actually, it sounds like someone’s overcompensating big-time. 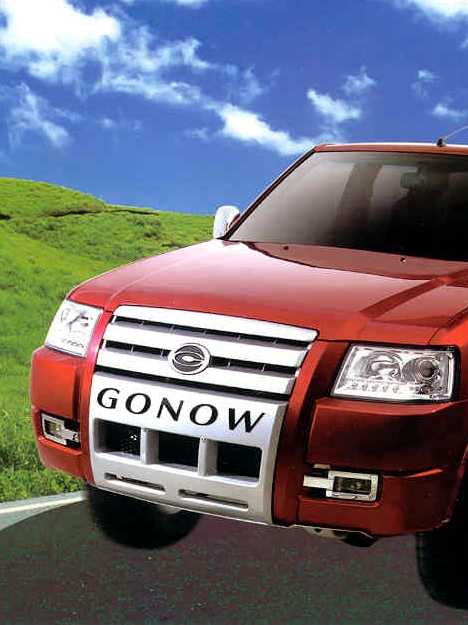 Auto shoppers can be forgiven for looking confused when a dealer’s sales rep greets them with “Come in, welcome to Gonow!” On the bright side, “Gonow” is a pretty darned good name for a car, Chinese or otherwise… it sure beats “Nova” (“Won’t Go” in Spanish), amiright? 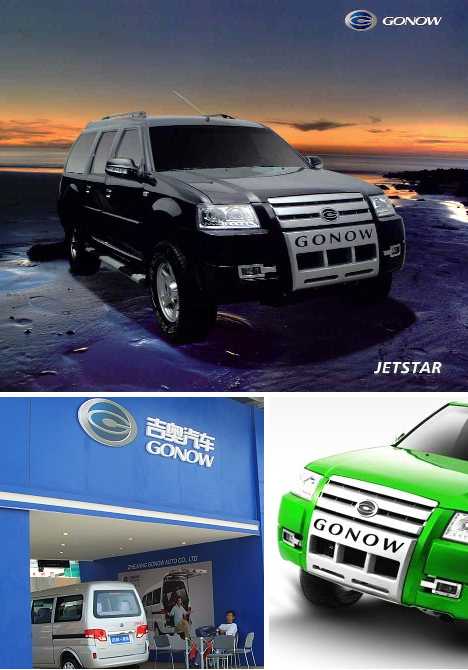 Gonow markets a range of vehicles including the Alter pickup, possibly named such because you’ll be praying for roadside assistance when it inevitably inconveniently conks out. On the other hand, you could slap one of those “My other car is a (fill in ostentatious vehicle name here)” decals on the rear bumper to show following drivers you’ve got an Alter Ego. 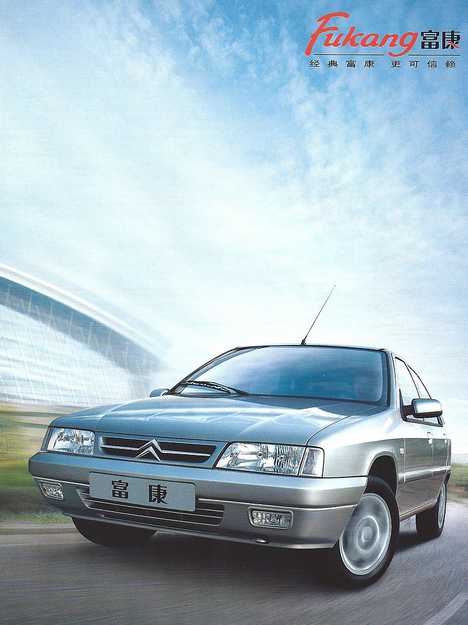 Where to begin? Dongfeng Fukang… try saying that six times in rapid succession without Mom washing out your mouth with soap. Dongfeng Motor has its headquarters in the city of Wuhan and it’s one of China’s “Big Three” automakers. The company also has a history of looking outward for inspiration and ideas – it’s the nation’s leader in joint ventures with foreign manufacturers. 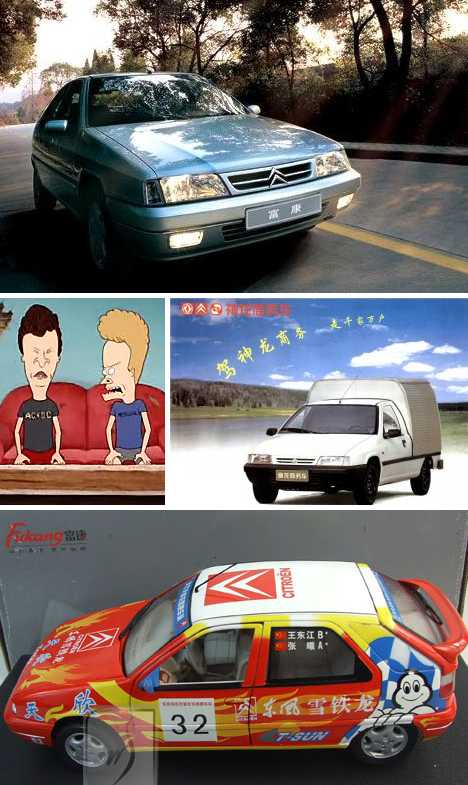 One of the most notable such partnerships is with Citroen and the Dongfeng Fukang was the first (circa 1992) product of Dongfeng Peugeot-Citroën Automobile group. So far so good… now if only they could get Beavis and Butthead to star in some commercials. 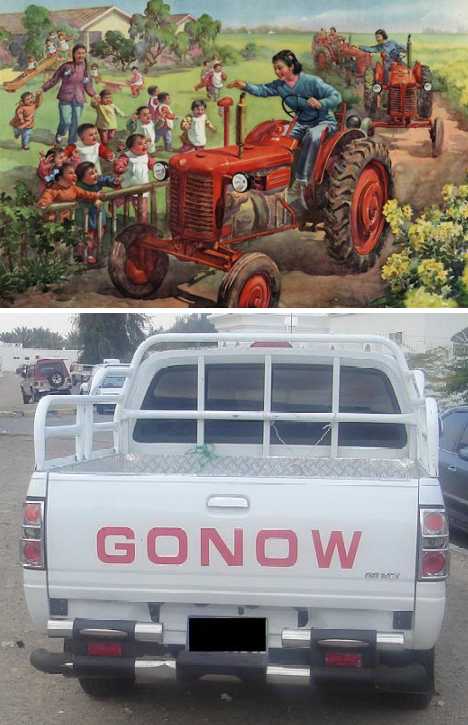 (images via: The Truth About Cars and TriniTuner.com)

China’s automotive industry has made a great leap forward from the dark days when the country’s most common rides were on rickshaws, bicycles and tractors. Today Chinese carmakers have arrived, mechanically if not semantically, and progress is excruciatingly slow on the latter. C’mon China, get the lead out… and we mean that in a good way!