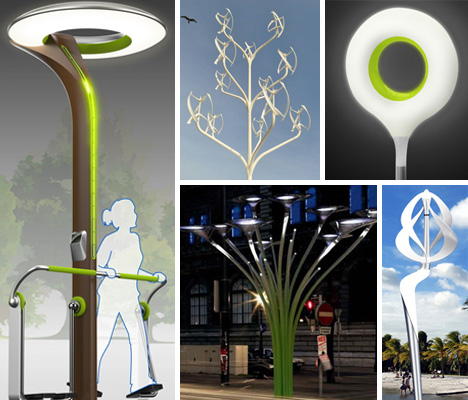 Street lights are a ubiquitous part of the urban landscape – so much so that most of us hardly notice their presence at all. What would happen if improving the aesthetics, functionality and environmental footprint of street lights suddenly became a priority? A few forward-thinking designers would have a head start. These concepts for improved street lights may just be the lights that guide us in the coming years. 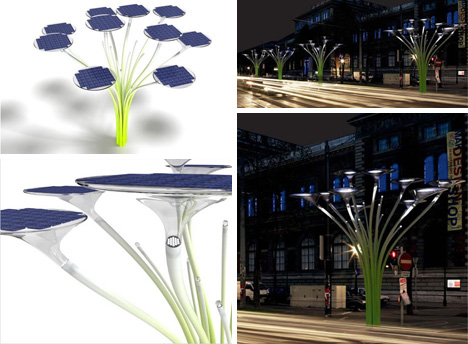 Taking streetlights off of the sometimes-unpredictable electricity grid is a priority for many designers. Ross Lovegrove created the Solar Tree, an LED-lit fixture that relies on the power of the sun to illuminate the streets. The array of up to ten leaf-like photovoltaic (PV) structures soaks up solar energy during the day and stores it in integrated batteries. When the built-in light detectors sense that the sun has set, the lights flip on, using much less power than traditional street lamps. 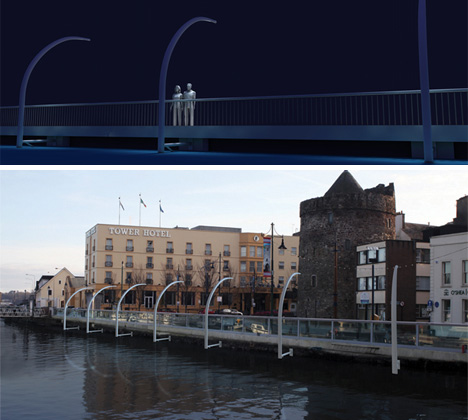 The Flowlight uses an incredibly powerful natural force to light the way: tides. Designer Shane Molloy used the tidal river called the River Sur as the basis for his design, which would light up piers and other waterside areas. A water turbine-equipped arm dips down from each light into the water, gathering energy from the movement of the waves. The arm floats higher or lower depending on the position of the tide, ensuring that it never misses an opportunity to build up some more energy for lighting the path after dark. 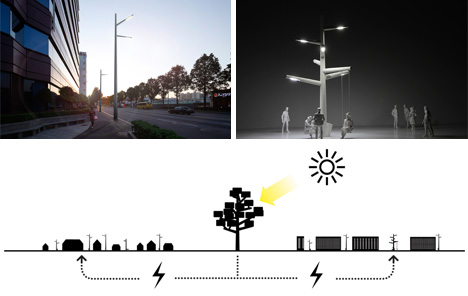 Utilizing a brand new kind of network or grid, the sTREEt concept would connect neighborhoods through a series of “urban furniture” pieces. The central part of the plan is the “mother tree,” a tall structure outfitted with lots of solar panels. The big “tree” feeds energy to smaller structures all throughout a neighborhood. These smaller modular structures feature changeable configurations which can be set up as just street lights or street lights with advertising space, convenient seating, or even fun swings. 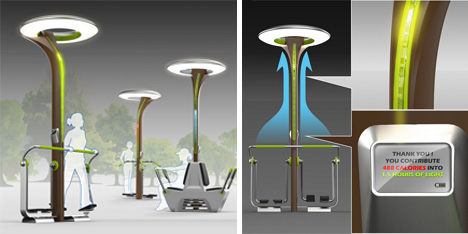 Would you donate your gym time for the good of the city you live in? That’s what the designers of the EnergyMe street light concept would like all of us to do. In order to keep the street lights on, the EnergyMe system requires citizens to walk, run, push, pull and pedal their way to fitness. The energy spent on working out is translated into power for street lights. The concept not only cuts down on the environmental impact of street lighting, but encourages everyone to get out and exercise. 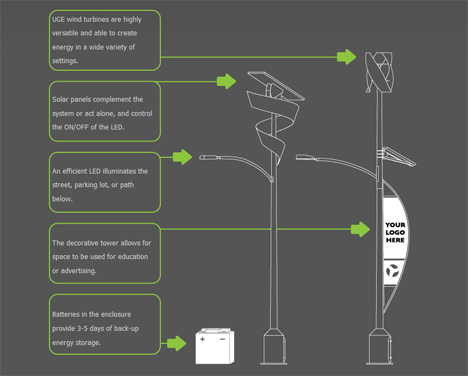 As a commercially-available product, the renewable street lamp from Urban Green Energy has already proven that off-grid lighting is possible. The dual-powered street lights utilize both wind and solar energy to power lights that illuminate streets, parking lots and walking paths. The built-in battery keeps each light going for 3-5 days in the event that the sun doesn’t shine and the wind doesn’t blow. As an added incentive to businesses looking to add this type of eco-friendly light to their properties, the street lights also include ample advertising space. 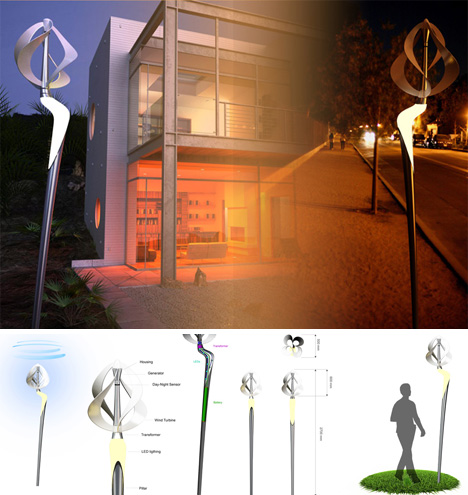 Designer Mebrure Oral shakes off the usual stereotypes about ugly wind turbines with the Windtulip design. Meant to look like a sleek piece of urban art, the Windtulip is actually a covert energy-producing turbine. Its top spins with the wind all day, every day, charging the internal battery. When the sun goes down the efficient LEDs light up to illuminate the cityscape.

Dial4Light is a German startup company that doesn’t want to change the way street lights look – just the way they work. Rather than keeping all of the lights in any given city on all night, their concept lets users tell the lights when they are needed.Citizens call a special phone number to turn on the street lights in a particular zone that they will be traveling through. The system has been implemented in several German towns already and is not without controversy, particularly since some localities require users to pay for the privilege of using street lighting. 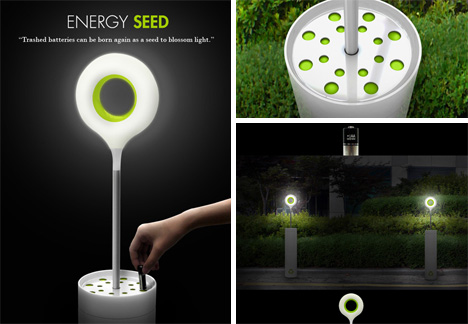 When you use up the batteries in a favorite gadget, the chances are very good that there is still at least a little power left in them. The Energy Seed street lighting concept from designers Sungwoo Park and Sunhee Kim would use those leftover bits of power to light city streets and sidewalks at night. Each light is “planted” in a pot with little round battery receptacles in the top. Users plop their old batteries in and the device (either through magic or some sort of unexplained mechanism) turns the leftover juice into illumination. Obviously this concept would need to be refined and expanded significantly before it could be introduced as an actual product, but the idea of using every last bit of stored energy is an appealing one.

A very straightforward and easily understandable design, the Sunflower street light from designer Riis Ros simply uses solar power rather than grid power to light up its surroundings. The “petals” of the sunflower feature PV panels on top and lights on the bottom, spread out in an array that does indeed resemble a flower. Entire gardens of these solar-powered flowers could one day light up towns and cities around the world. 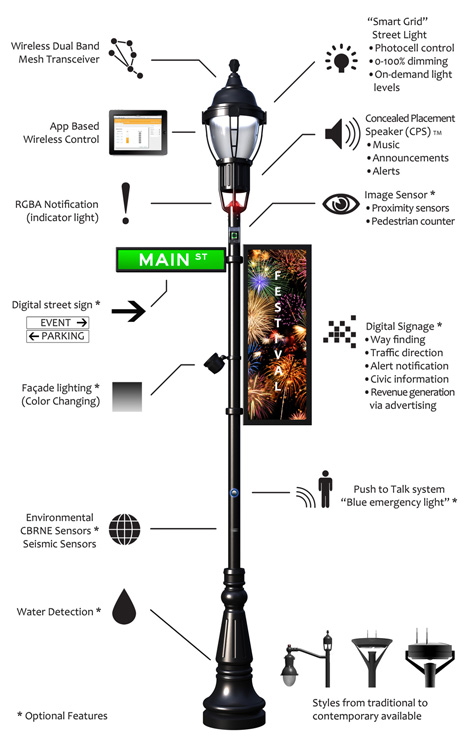 Perhaps the most controversial street light since towns changed from gas to electric lamps, the Intellistreets light is much more than just a light in the dark. It also features speakers, digital signs, a dual band transceiver, an emergency alert system, and a camera. It is, understandably, this last part that makes some people wonder whether this next-generation street light will be used to spy on citizens in the near future. The Intellistreets lamps were already introduced in parts of Michigan in 2011; according to city officials, they will help cities save money by using less energy and only operating when needed.