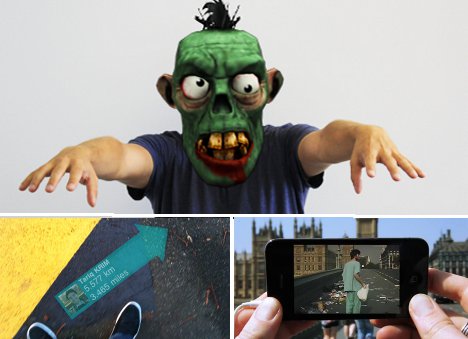 Technology has taken over so many facets of our lives that the real world sometimes seems a little boring by comparison. Never fear – technology is slowly creeping into even the most mundane corners of our existence, making sure that we never have to face reality without some sort of augmented component ever again. These 15 designs, apps, inventions and gadgets put a digital element right into the real world – for better or for worse.

Augmented reality has the amazing ability to transform our world while also transforming ourselves, as the Zaphat proves. Put on the Zaphat and your whole identity is immediately transformed…at least when you’re seen through the camera of a mobile device running the Zappar app. The little patch on the front of the hat is actually a target that indicates your head location and orientation to the app, which then overlays a three-dimensional virtual mask on top of your face. The person operating the device can manipulate the type of mask and even interact with it virtually.

Typically, street art is a fairly stationary form of personal expression. But thanks to futuristic augmented reality, street art can come to life and dance around right in front of observers. The LZRTAG augmented reality app allows people to aim a smartphone at a target in order to see a short animated street art clip. Anyone at all can upload an animation and print out a tag to decorate the world, all for free.

Twitter’s geotagging feature allows friends to find one another in real life with an app called Twitter 360. Using an iPhone’s camera, the app creates an augmented reality overlay map that guides the iPhone holder to nearby friends based on their geotagged tweets. Users just have to follow the arrows that appear on the screen to be led directly to the nearest contact.

If you’ve ever traveled to a specific geographic spot just because it was featured in a favorite movie, the AR Cinema app from developers Halocline will be an exciting concept. The smartphone app senses when you’re in a movie-related location and shows you the famous scene(s) shot there. It’s an interesting way to combine a love of travel and a love of movies – and maybe even our collective love of smartphones.

On a long car or train journey, boredom can set in pretty quickly. This conceptual game would use a Kinect and other simple hardware to create an augmented reality overlay on the actual scenery outside of the vehicle in which you’re traveling. By touching the window, players would be able to add all kinds of fun objects and elements to the passing scenery. The game, called Touch the Train Window, is from Tokyo design team Salad. 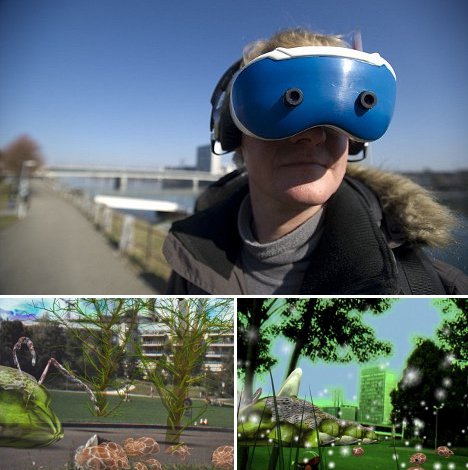 If the beauty of nature is getting a bit boring, perhaps you’d like to spice things up a bit by throwing in some psychedelic visions and experiences. Swiss designer Jan Torpus has created a project called lifeClipper, in which visitors put on head-mounted display equipment for a walk through the park. The display shows the user’s actual surroundings but adds an extra layer to reality. This additional layer includes vivid colors, surreal characters, and an imaginatively enhanced landscape.

Changing your reality is simple when you’ve got high-tech augmented reality tools on your side. Software from a German university allows you to remove unsavory objects from your video footage as you’re filming it – just tell the software what you want to disappear and it magically erases it. The whole process takes only microseconds and is convincing to all but the sharpest eyes.