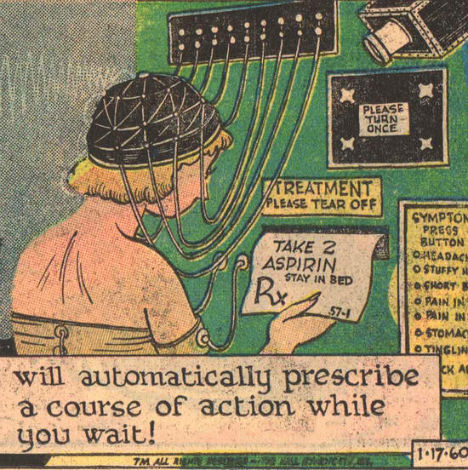 In a series looking at the technology in every episode of “The Jetsons” TV show from the original 1962-1964 season, the Smithsonian blog Paleofuture looks at how the show reflected the expectations of the time. One episode has George swallow a prober capsule that travels around the inside of his body and transmits pictures to a television screen. Diagnostic imaging has made leaps and bounds since the ’50s, when manual film processing threw a major wrench into the whole process. But we’re still a long way away from automated medical examination booths where we slip into an instrumented suit to get a physical, with a computer analyzing all of our basic bodily functions and automatically printing out prescriptions. This concept was envisioned in the January 1960 edition of the Sunday comic strip Our New Age. 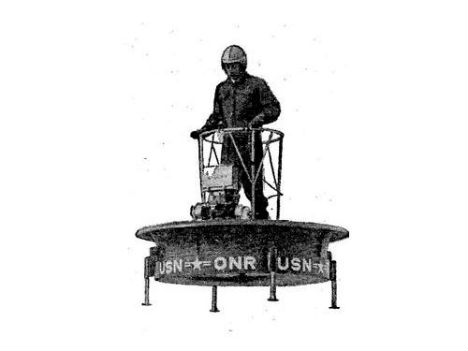 Jet packs weren’t the only invention that would finally give human beings the ability to fly with little more than their own bodies. Personal flight machines seemed inevitable, with single-person helicopters expected to be as common as bicycles. One idea presented in the April 1955 issue of Pacific Stars and Stripes was this flying platform, a wingless circular platform with two fans that rotate in opposite directions to produce an air blast that lifts and propels it. They figured that not only would this machine serve as an assault boat for individual soldiers, it would also be “the businessman’s speedy coupe of the future.”

In the early 1960s, technology ponderers could envision a future with automated vehicles, but not one without milkmen. In the 1920s, nearly all milk consumed in the United States was delivered directly to the home, but that number dwindled steadily over the decades as refrigerators became more common and suburbanization made delivery less convenient. The August 6, 1961 edition of the Sunday comic strip Closer Than We Think! imagines that the milkman of the future would have an automatic robot helper called an ‘electronic dobbin’ packed with glass bottles. The milkman would be on foot, guiding the robot with a remote control. 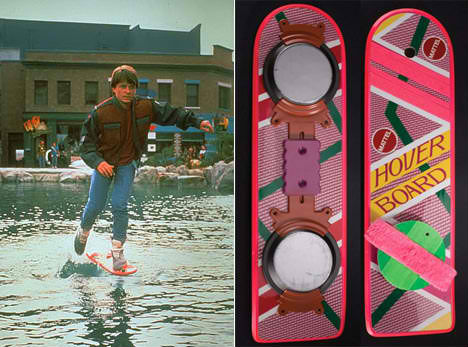 How many of us watched Back to the Future II as kids and stared in wide-eyed wonder at Marty McFly’s hoverboard, thinking the day when we’d have our own was just around the corner? “Let’s face it, we’re never getting our hoverboards,” moaned Slate in a November 2012 article, debunking rumors that working prototypes actually exist. The movie was set in the year 2015, but it’s looking unlikely that the technology will really be developed in time. Claims of working hoverboards have turned out to be either hoaxes or versions of hovercraft vehicles that don’t have the same capabilities as the Back to the Future hoverboard. Want one that looks exactly like Marty’s? You can have an actual prop from the film for just $30,000. Too bad it’s just a piece of pink plastic.

Intelligence-Improving Computers That Connect to Our Brains 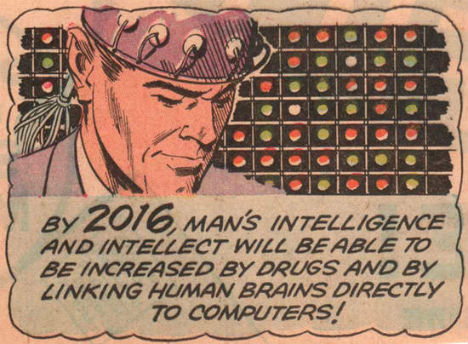 Athelstan Spilhaus’ predictions in a 1965 edition of the comic strip Our New Age may not be entirely serious, but they’re still laughably far off the mark today: the artist imagined that by 2016, we’d be able to improve our intelligence with magic smart pills and by hooking our brains directly to computers. Of course, the next prediction in that strip is that by 2056, our holiday dinners cooked by robots could be served to us by friendly, intelligent animals trained to be household helpers – including kangaroos.