Stringed instruments have been played since time immemorial, and naturally as technology improves plenty of people are trying to recreate that kind of sound digitally. Of course, nothing compares to the rich, warm, sensual sound of an actual stringed instrument, and this is something that artist and artisan Jon Jones understands better than most people. That is why he created the Wheelharp, an incredible stringed instrument that manages to sound like the entire string section of an orchestra all on its own. 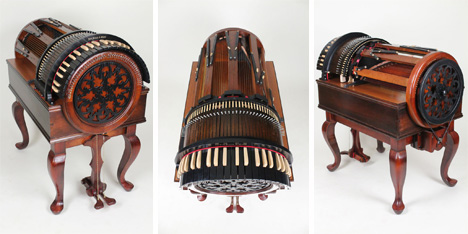 The beautiful instrument was inspired in 2001 by Jones’ hurdy-gurdy, an ancient stringed instrument that produces tones via a hand-cranked rosined wheel rubbing against strings. As much as Jones enjoyed the hurdy-gurdy, he wanted to know if he could create a full-scale chromatic instrument in which each string could produce a different sound when individually bowed on the rosined wheel. He set out to produce the first Wheelharp.

The result was an instrument of incomparable beauty and charm. Pressing on any of the Wheelharp’s keys moves a string toward the rosined wheel. Of the instrument’s two pedals, the right controls the speed of the motor which turns the wheel. The left pedal controls a damper system that extends across the strings. Although the instrument looks old-timey and low-tech, it also includes an electromagnetic pickup and a piezoelectric pickup, both of which allow the player to control the instrument’s amplification. 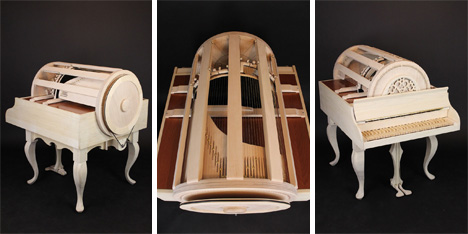 It would be impossible to describe the immense beauty and complexity of the music produced by the Wheelharp. It is truly an instrument like no other in the world. It is produced in two versions: a radial version (with the curved keyboard) and a linear model with a more familiar, traditional straight keyboard. Both models produce some of the most breathtaking music ever produced by a single instrument. It certainly doesn’t hurt that the Wheelharp is an object of beauty to look at, either. But if you want to give this incredible invention a try, be ready to pay for it: the least expensive version from Antiquity Music runs nearly $10,000.