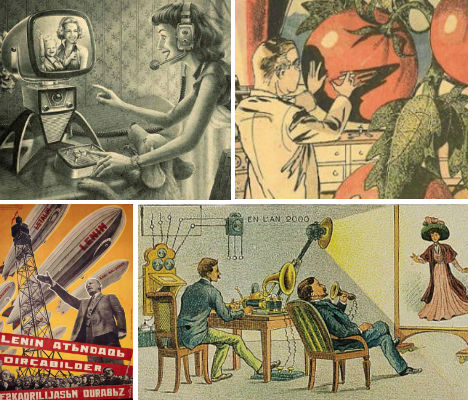 “These prophecies will seem strange, almost impossible,” reads the intro to a 1900 article printed in the Ladies Home Journal entitled ‘What May Happen in the Next Hundred Years.‘ And over a century later, many of them do. The “wisest and most careful men in our great institutions of science and learning” envisioned that by the year 2001, we humans would have willfully made all wild animals extinct to make room for ourselves, and we’d be eating sterile foods zipped from laboratories to our homes via pneumatic tubes. But some of these ideas are more prescient than others, accurately imagining innovations like factory farming and even the internet. 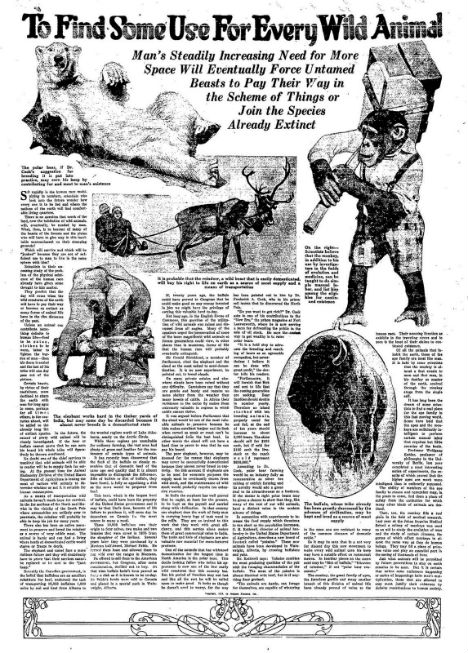 “Man’s steadily increasing need for more space will eventually force untamed beasts to pay their way in the scheme of things, or join the species already extinct,” reads a 1926 article in the Galveston Daily News. That attitude was surprisingly common during the early 20th century, despite the fact that the predictions in the Ladies Home Journal article underestimated a century of future population growth by billions. The Ladies Home Journal article predicted that animals wouldn’t exist in the wild anymore at all, and would only be found in zoos, unless they were in use as livestock or service animals.

The article predicts that rats and mice will have been completely exterminated (along with mosquitoes, flies and roaches, which would require filling in all swamplands and chemically treating all still-water streams) and that cows will be so fat, they’ll be as slow as livestock pigs. “Food animals will be bred to expend practically all of their life energy in producing meat, milk, wool and other by-products. Horns, bones, muscles and lungs will have been neglected.” Sounds like modern-day conditions at many of America’s largest factory farms.

Purchases and Pre-Cooked Meals Are Delivered via Pneumatic Tubes 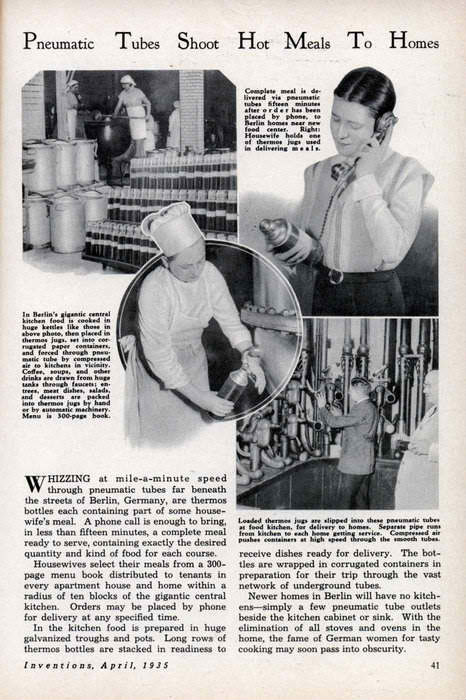 In an era when compressed food tablets actually seemed like a great idea, sterile pre-cooked meals made in laboratories rather than kitchens were an appealing concept. The Ladies Home Journal article imagines that ready-cooked meals would zoom from these central labs to private homes via a vast system of pneumatic tubes. Equipped with all manner of electrical gadgets not found in homes, these laboratories would also be able to supply food cheaper than it would cost to cook for yourself, since they’re buying ingredients in such large quantities. You press a button, your food zips to you within minutes, and then you send the packaging and utensils back to be chemically cleaned. Store purchases and mail would be delivered in much the same way.

Furthermore, you’d never have to worry about anyone breathing on your food, or exposing it to the atmosphere of the busy streets. Shopkeepers would be arrested if they dared to store food that wasn’t essentially hermetically sealed, or if they sold “stale or adulterated produce.” The miracle of always-fresh produce would be achieved using liquid-air refrigerators.

The idea of pneumatic delivery hasn’t gone away altogether – some cities use pneumatic tubes to dispose of trash, and a company called the Foodtubes Project aims to reduce greenhouse gas emissions by transferring much of the UK’s deliveries from trucks on the roads to underground tubes.

The Suburb is the Promised Land for Taller, Healthier Americans 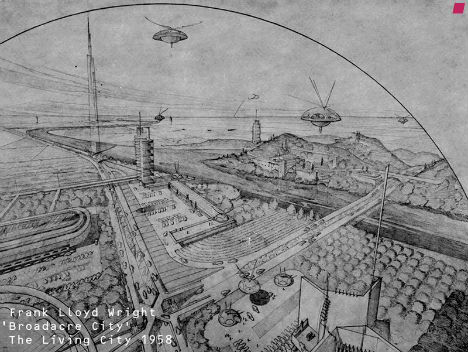 The suburbs seemed like utopia for people living in clogged, smoggy cities. The predictions of the day envisioned Americans not only living much longer thanks to quiet lives in the peaceful suburbs, but also be one to two inches taller on average thanks to better health “due to vast reforms in medicine, sanitation, food and athletics.” In fact, suburbs would be so amazingly beneficial for mankind, city housing would be practically eliminated, and building in blocks would be illegal.

Americans, and humans in general, are indeed taller than we were in the year 1900, thanks to ample amounts of nutritious foods, though that could very well change with the unhealthy fast-food diets that have become increasingly common over recent decades. The suburban dream hit its peak during the ’50s, however, and is now starting to fizzle, with many young people choosing to live in cities for access to efficient transportation, jobs and culture. 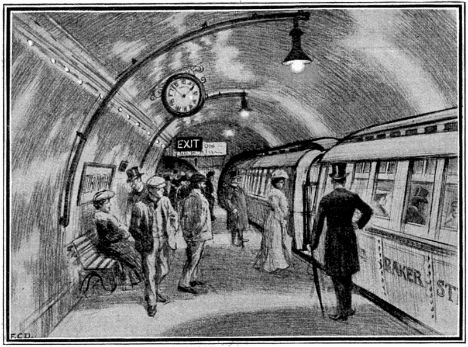 The dream of the suburbs would be achieved with quiet, high-speed transportation that was virtually invisible at surface level, with “well-lighted and well-ventilated” underground railways in broad subways or tunnels, as well as monorails and elevated streets. Trains would take passengers from New York to San Francisco in a day and a night (imagine!). It’s easy to see why this seemed so readily achievable in the year 1900; the first underground railway in the world opened in London in 1863 and transportation grew more efficient by the year. People hadn’t yet been seduced by the status and freedom of individual automobiles.

We may have high-speed trains in much of the world (though sadly, still not in most of America), but car-free cities “free from all noises” are far from our current reality. However, at least one city may be able to achieve that ideal: ‘Great City’, a dense carless metropolis being built from scratch in a rural area outside Chengdu, China.