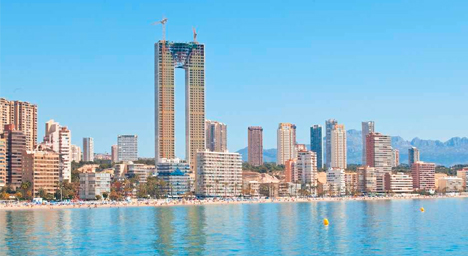 Twin towers raising up the existing skyline and joined at the top – these were supposed to be a sign of recovery in a city and country ravaged by the global financial collapse. Instead, the Intempo building in Spain has become a stark standing symbol of incompetence. Consider, for instance, the following farcical architectural accident: it was not built to house an elevator actually able to climb the structure, which is already over 500 feet tall. 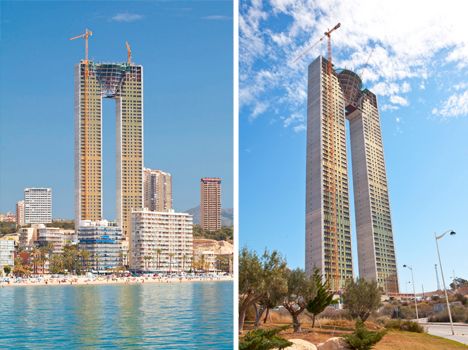 As Jamie Condliffe summarizes on Gizmodo (images via IntempoBenidorm), the rising scope of the building was in part “a function of the greed surrounding the project. Initially designed to be a mere 20 stories tall, the developers got over-excited and pushed the height way up: now it boasts 47 stories, and will include 269 homes. But … original design obviously included specifications for an elevator big enough for a 20-story building.” 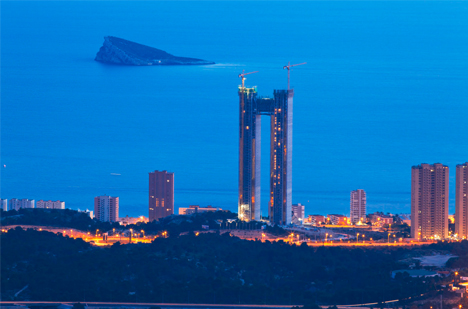 As a result, the shaft space and room for lifts, motors, cable and other equipment was significantly under-designed, leaving nearly thirty stories (maybe more, depending on the final height) of condominiums that would be walking-access only if the structure were finished as currently planned. 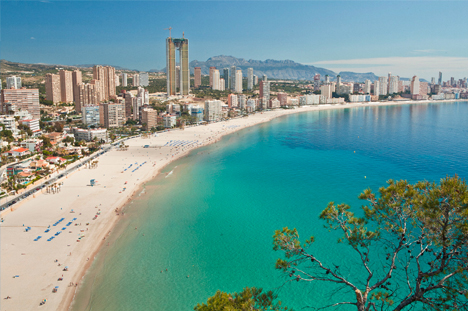 Thanks to bad banks going under, corruption surrounding the construction itself and costs of materials, the entire process has been plagued with problems and setbacks almost since it began. At different points, the builder went without pay, workers walked off the job thanks to poor safety conditions and interruptions have delayed completion time and time again. On the financial side, from Economia: “The project is burdened by allegations of fraud, liens and claims from customers and suppliers.” The absence of spatial accommodation for a working elevator is in some ways simply the symbolic cherry on top – except to get to that cherry, you would need to walk up dozens of flights of stairs.