When an Amsterdam-based startup announced last year that it was training crows to pick up cigarette butts in exchange for food, the concept seemed a little ridiculous, but not because crows aren’t smart enough to pull it off. Corvids are among the most intelligent animals in the world, routinely shocking scientists with their reasoning skills, and they’re already known for snatching cigarettes right out of people’s hands. It’s the concept of training animals to clean up our messes that has many people shaking their heads, though it’s arguably a symbiotic transaction. 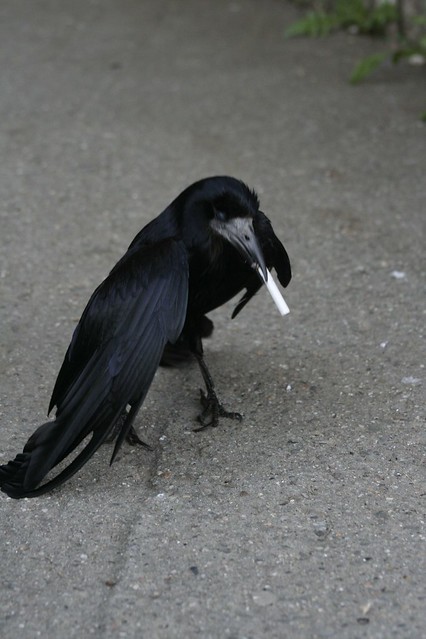 As it turns out, we don’t even have to wait for the results of the Crowded Cities experiment, which uses a ‘crow vending machine’ to reward the birds for collecting and depositing cigarette butts. A French theme park called Puy du Fou began its own crow cleanup crew project, employing six birds to pick up butts and other bits of rubbish and insert them into a small box.

“The goal is not just to clear up, because the visitors are generally careful to keep things clean,” says Nicolas de Villiers, head of the park. It’s also about proving “that nature itself can teach us to take care of the environment.”

The crows received their training from the park’s “Academy of Falconry,” and the pickup project is inspired by the park’s falconry show, in which crows retrieve roses and deliver them to a “princess” in a castle. The falconer keeps an eye on the situation to make sure tourists don’t drop trash just for the crows to retrieve, and keeps the birds from cheating by dropping objects other than trash into the box.