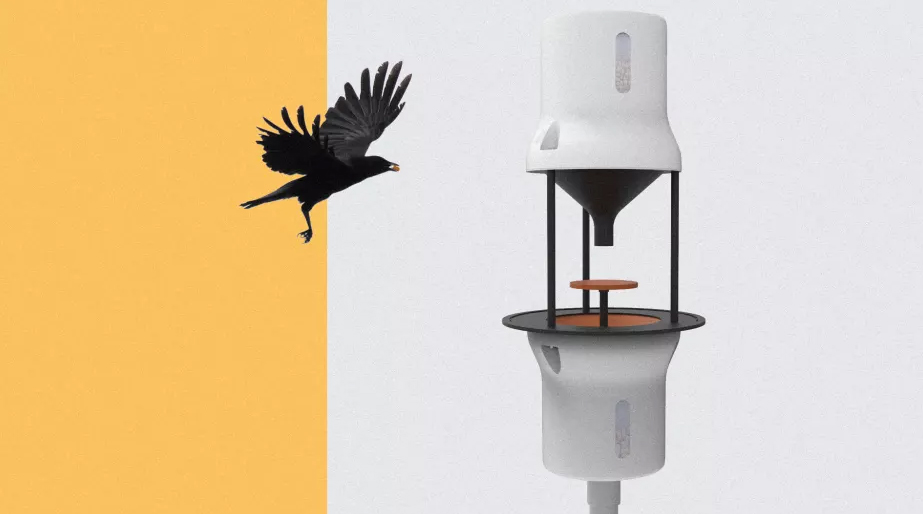 Each year, trillions of cigarette butts are thrown on the streets of cities worldwide, but what if a highly intelligent urban creature could be trained to pick them up, and even be automatically given a treat for their troubles?

Crows are adept learners, able to use tools and think outside the box. Notably, they have already been trained to use specialized ‘vending machines’ in which they receive food for depositing a coin. By extension, butts could be the new coin of the urban crow realm.

Cities have tried all kinds of things to get smokers to stop discarding butts on the ground, including ‘ballot bins’ letting them vote for favorite sports teams as well as light-up and musical garbage cans. Alas, humans are tricky to train, and not always very responsible.

But crows are another matter — not only can they learn to perform tasks, but they can also pass their knowledge onto others of their species. Through this kind of viral education, Crowded Cities, an Amsterdam-based startup, thinks they could be the future of litter collection.

Inspired by the work of Joshua Klein, who had created the first crow vending machine, they began to explore the idea of using that same principle but with a different behavioral target. In the prototype, birds learned they could pick up a coin, put it in the device and get a peanut.

Crowded Cities is working in the same way with Crowbar, a gadget that features a ‘butt drop’ funnel, camera to verify that the deposited item is indeed litter, and treats given out on success.

Before they fully execute, however, they are doing more research to ensure that crows won’t be harmed in the process of collecting and dropping off butts. Some might also question the ethics of enlisting animals to clean up our messes (though others might call it a kind of symbiosis).

“It may turn out that crows can handle cigarette butts with no harm at all, in which case both crows and humans could benefit,” says one of the designers. “That’s the kind of solution I’m looking for.”

“Crows aren’t going away anytime soon, and it’d be nice to find a way for us to work cooperatively.” In the end, the project is also about raising awareness — perhaps simply knowing they could be called ‘dumber than a crow’ will encourage some smokers to be more civic-minded.