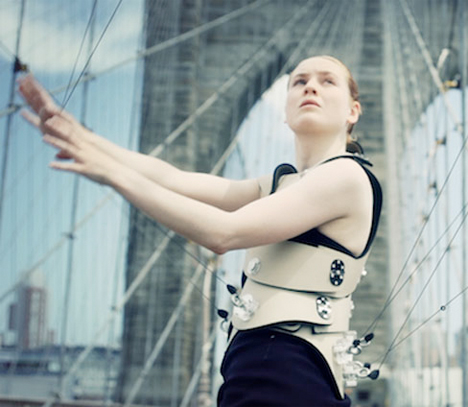 A digital and mechanical module that fastens onto bridges and connects via retractable strings to a wearable suit creates a ‘human harp,’ a musical collaboration between the user and the bridge. The harpist moves in a sort of dance to pull the strings, creating the sounds, which are felt in real-time through vibrations on the bridge. The installation will travel to bridges around the globe, so pedestrians have a chance to try it out for themselves.

London-based artist Di Mainstone got the idea when looking at the Brooklyn Bridge during a residency in New York City, and seeing its similarity to the musical instrument. She envisioned a clip-on sound interface that would allow pedestrians to ‘play’ the bridge as if it were really a harp. 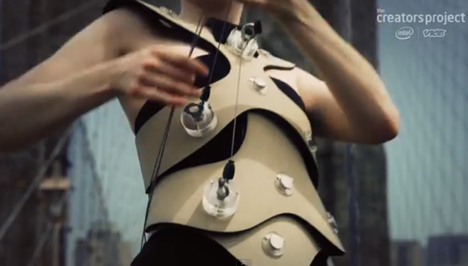 The Human Harp was created by a collaborative team of artists, e ngineers and researchers using cutting-edge technology. The modules on the device utilize magnets in acrylic bubbles to detect the angle of the ropes. The movements are processed using software packages to generate the sounds. Watch the video to get an idea of the process. 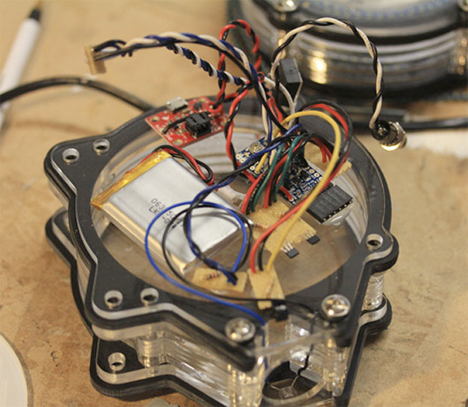 “As I listened to the hum of the steel suspension cables, the chatter of visitors and the musical ‘clonks’ of their footsteps along the bridge’s wooden walkway, I wondered if these sounds could be recorded, remixed and replayed through a collaborative digital interface? Mirroring the steel suspension cables of the bridge, I decided that this clip-on device could be harp-like, with retractable strings that physically attach the user or Movician’s body to the bridge, literally turning them into a human harp.” 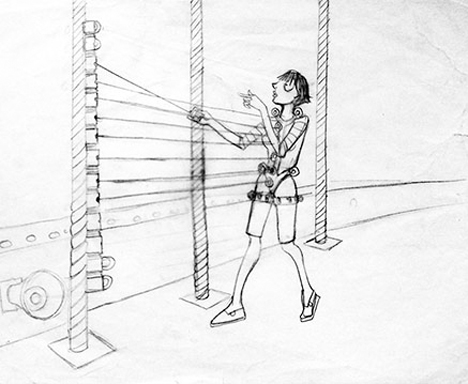 “We could imagine this process is a game of international research whispers, with information passing from one laboratory onto another.  All hubs will be integral to this dialogue, as the Human Harp develops and grows on its journey around the globe.”