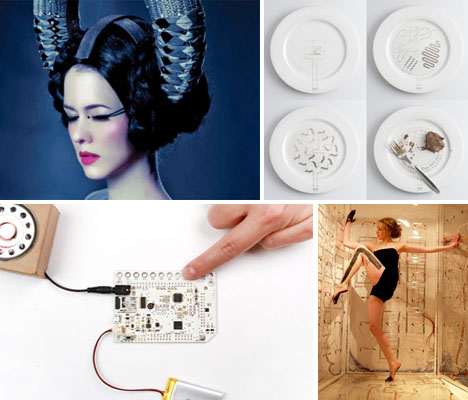 Electronic functions aren’t just limited to gadgets anymore – they can be extended to everyday objects, architectural surfaces, paper, clothing and even our own bodies. Conductive paint, thread and wires are used in conjunction with little processors like the Arduino Lilypad to turn bananas into musical instruments or a pair of metallic false eyelashes into a controller for an LED headset. 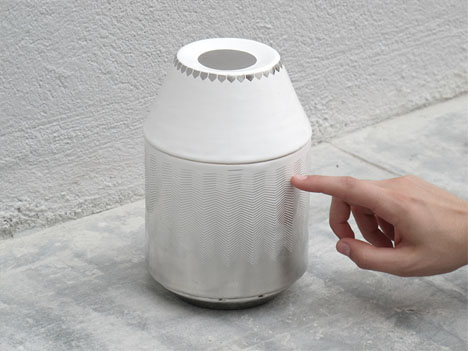 The metallic patterns on what looks like no more than a ceramic vase aren’t merely ornamental. In fact, they’re how you control the volume, frequency and on/off functions of this object, which is actually a radio. Made using fine palladium paint that has conductive properties, geometric patterns each have an individual motif for the function they control. The Hibou, as it’s called, is the result of an unusual collaboration between a gilder and an electronic specialist. 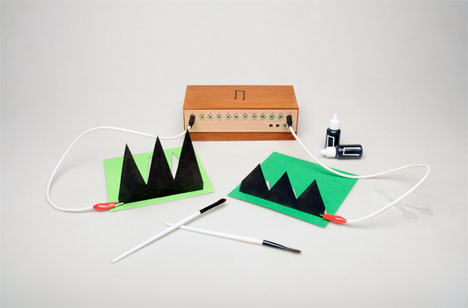 Flat sheets of ordinary paper become functioning, noise-making instruments thanks to a prototype kit containing conductive carbon paint, stencils and an Arduino Duemilanove board. Individual painted areas on the paper turn into playable trumpets, guitars, drums and more (recorded by the London Philharmonic Orchestra) by turning them into capacitive sensors that react to gestures. The Arduino board is synched with a smartphone app via Bluetooth. 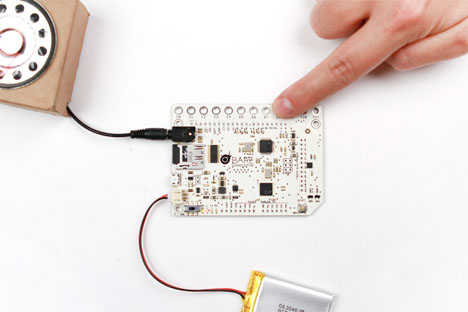 Another touch board uses capacitive sensing  to turn any conductive material into an interface. The touch boards are pre-programmed to turn gestures into sound just by connecting them to a speaker and plugging in a micro USB cable. You effectively paint light switches, volume controls or musical instruments onto a surface with electrically conductive paint, and then use gestures to control them. 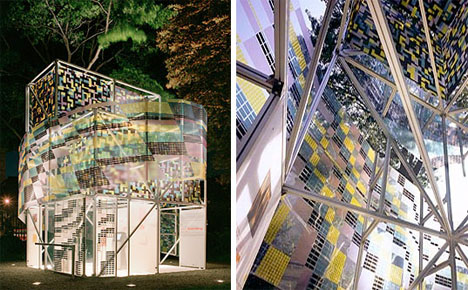 Now imagine taking that kind of interactive functionality and applying it to an entire building. That’s the idea behind SmartWrap interactive architectural film, which can be applied to a wall or the facade of a structure to provide not just shelter and climate control but also lighting, information display and power. It’s embedded with OLED technology, thin film batteries and silicon cells and conductive ink. 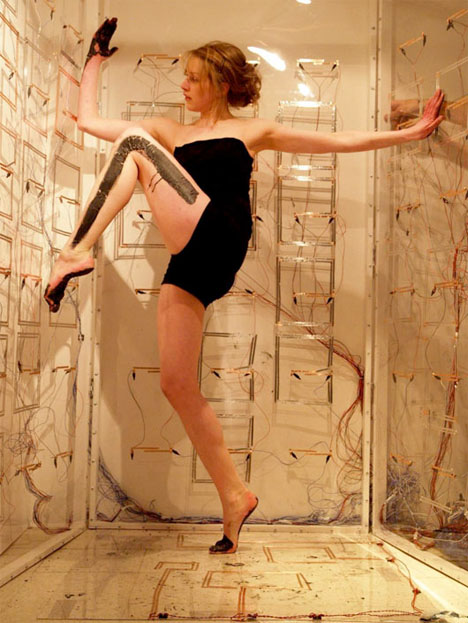 A conductive ink applied directly to human skin can bridge the gap between electronics and the body. Bare Conductive’s body paint is a skin-safe, water-soluble carbon-based ink that can be brushed, stamped or sprayed on to allow users to interact with technology through gestures, creating ‘custom electronics.’ The makers list potential areas of use as dance performances, music, fashion, security, military, audio/visual communication and medical devices.