The medieval revival style Cointe Observatory, designed by architect Lambert Noppius, was built in 1881-82 on the former estate of the wealthy Vanderheyden de Hauzeur family in Liège, Belgium. The observatory buildings housed the University of Liège’s Institute of Astrophysics until 2002 and plans are underway to renovate the structure. There is no estimate for completion but fans of Futurama expect the work to be VERY long term. 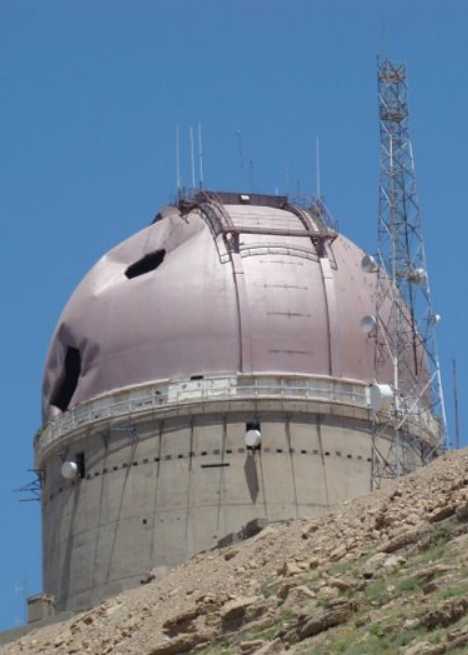 Founded in 1973 atop 2,127-meter (6,978-ft) Mount Korek in northern Iraq’s restive Kurdistan region, the Erbil Observatory consisted of two optical telescopes and one radio telescope. During the Iran-Iraq War, however, the astronomical complex’s location on a strategic mountaintop less than 50 kilometers from the Iranian border made it a prime target: first for Iranian missiles and some years later, by the American air force. In 2007 hopes were raised for the restoration of the Erbil Observatory but as with much else in the region, the best-laid plans have come to naught.

In the market for an anti-zombie fortress that doubles as a hotel with spectacular views of the Matterhorn? Hey, who isn’t, and luckily such a place exists: the Gornergrat Infrared Telescope in Zermatt, Switzerland. TIRGO, for short, occupies the north tower of the Kulm Hotel at Gornergrat, 3,135 meters (10,285 ft) above sea level in the snowy Alps. Built in 1967 on top of the much-older hotel, the observatory once housed a 1.5 meter (4.9 ft) Cassegrain telescope optimized for infrared observations. It was decommissioned in March of 2005 but may re-open in the event of a zombie apocalypse.

Opened in 1886, the Creighton University Observatory in Omaha, Nebraska was the city’s first observatory and the second in all Nebraska. Its first telescope, a brass-tubed refractor imported from London, boasted a 5″ aperture and an 84″ focal length. Closed in 1955, deterioration of the observatory’s support structures in recent years has raised worries for the safety of visitors and thus, access to the observatory has been prohibited.