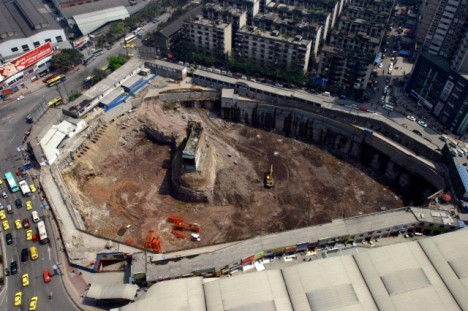 Wu Ping of Chonqing didn’t want to move either, despite the fact that all of her neighbors had agreed to make way for a new shopping mall. But the developers were bent on seeing the demolition of her house, which stood almost in the exact center of the building site. They dug out the earth around it in the hopes that it would force her to leave. Even when she had to start climbing a steep earth wall to get to her home, raising and lowering supplies on pulleys, Wu Ping refused. She didn’t leave until the compensation offer reached one million yuan plus a new apartment. The house was finally demolished in April 2007. 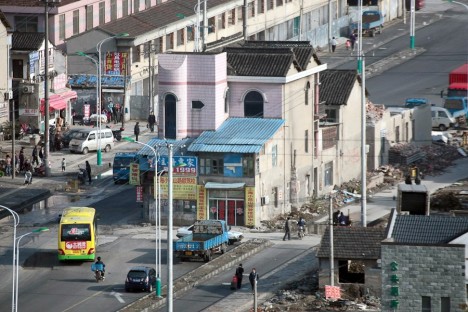 Traffic routes awkwardly around this nail house in Shanghai, the highway narrowing to just two lanes around the building. For owner Xu Jun, taking the government’s compensation not only means letting go of the house for far less than it’s worth, but also losing revenue streams from the small businesses located on the ground floor. The area around the home became known for car accidents, but Xu refused to apologize for fighting, asserting that the local government was conspiring with developers to cheat middle-class families. It’s not clear whether the home was ever demolished. 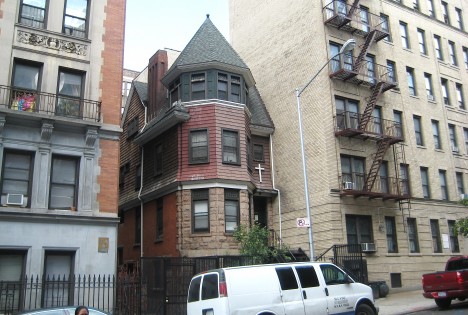 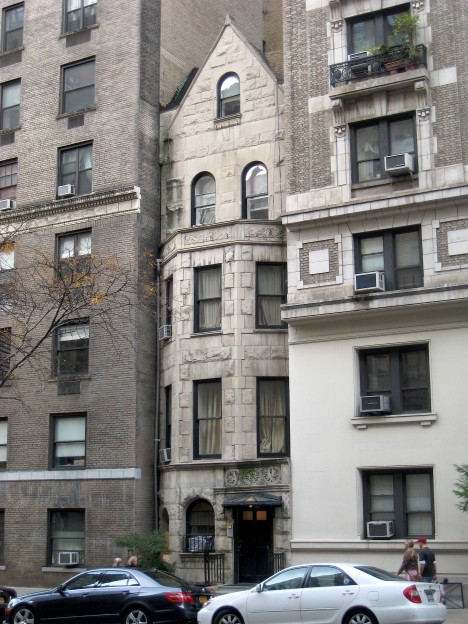 Take an observant walk around New York City, gazing up at the architecture, and you’ll notice that it’s studded with buildings that seem entirely out of place, squeezed into awkward niches between newer structures. New York has changed dramatically and rapidly over the centuries, and in the past, when property owners refused to move, developers just shrugged and built around them. One example is a small Gothic-inspired townhouse flanked by pre-war apartment buildings; another is a Queen Anne house in Washington Heights that has since been converted to a church. See more at Ephemeral New York.

Kunming House Surrounded by a Moat 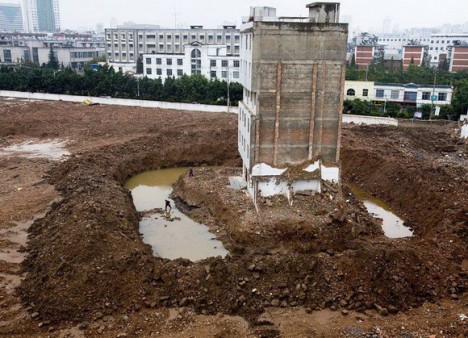 The developers working on a new project in Kunming, China weren’t playing around when they set out to intimidate the owner of the lone remaining structure on their building site. The standoff began when the developers offered Zhao less than his property was worth, and he continued to live in the building with his wife and 83-year-old mother even as the rest of the buildings in the complex were torn down. So the builders began digging a ditch, taking out more and more earth each day, knocking out the electrical and plumbing connections in the process. Rain filled it with water, creating a moat that Zhao had to cross in order to get to and from his house. Unfortunately, the fate of Zhao and his family home is unclear. 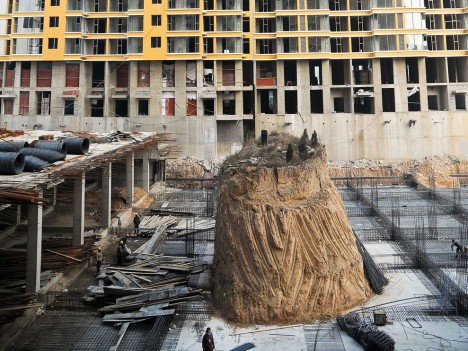 Not all nail houses are ‘houses,’ per se. Sometimes, they’re tombs. As a multistory residential complex took shape on the former site of a cemetery in the city of Taiyuan, a lone grave remained, sitting on top of a 30-foot-tall tower of mud created when the land around it was excavated. The family of the deceased refused an offer to compensate them for the land, saying they couldn’t understand why the developers had to build on this particular spot.