Saving time, energy and bridging the gap between high-speed rail and local-only service, these proposed solutions (each in their own unique way) let people board and disembark at their leisure while the main train speeds along. In on case, passengers wait inside an ancillary car that hooks into a passing bullet train – in the other, they step seamlessly across a dock when changing between slower and faster trains.

First, the overhead-car approach (illustrated above) from China, a country that has long been on the cutting-edge of record-fast rail travel, pioneering magnetic levitation trains and incredibly fast cross-country routes with few stops in between. One simply steps into the upper cabin and then walks down into the main train once the two sync up.  A second approach, proposed by PriestmanGoode and shown below, involves synchronizing two trains alongside one another then allowing each to dock with the other in transit. 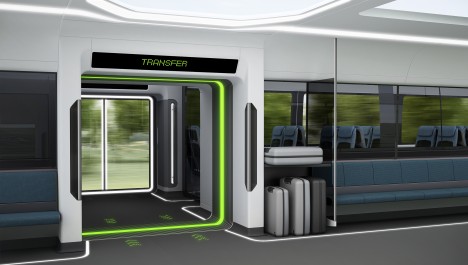 Aside from being more energy-efficient, a lot of other standard frustrations of train travel are rendered obsolete by one or both approaches, like queuing up, pushing and shoving for quick entrances and exits at the right stop (an issue you will know is serious if you have ever ridden Chinese trains or subways). In the case of Moving Platforms from PG, train transfers in general could be made faster and smoother without requiring stops along the way. 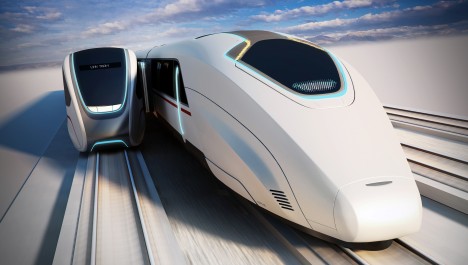 At this stage, the concepts look promising but some technical questions still need to be resolved, including whether using wheels makes the most sense (in the Chinese variant) and the speed reduction required on the part of the passing train to make the two meet smoothly (in either case). There are also issues of infrastructure – the need to potentially build out additional parallel tracks would require space in the second instance.

Both, however, address a huge pain point in transportation as well as energy efficiency: slowing, stopping and waiting for and between public transit rides. Eventually, one could imagine an omni-directional maglev system taking people directly from buildings to their trains without needing to stop or transfer along the way.