Litterbugs usually like to keep their polluting crimes a dirty little secret – but Hong Kong Cleanup wanted to show them that there is no way to hide from the all-seeing eyes of technology. They created an environmental campaign called “The Faces of Litter” which used DNA phenotyping to create portraits of people who littered.

The rather Orwellian campaign illustrated garbage police collecting refuse with traces of DNA from around Hong Kong. In the campaign video, cigarette butts, coffee cups, and even a used condom were picked up and taken to a lab for analysis.

Once the DNA had been isolated, scientists used a program called Snapshot DNA Phenotyping to create a realistic 3D image of the litterbug. These faces could then be displayed in public places as a shame campaign to deter future littering.

The technology involved in this concept is indeed available, but The Faces of Litter was only an awareness-raising campaign. Photos were indeed displayed at Hong Kong transit stations, but they weren’t of real criminals – the faces were created using the DNA of volunteers. 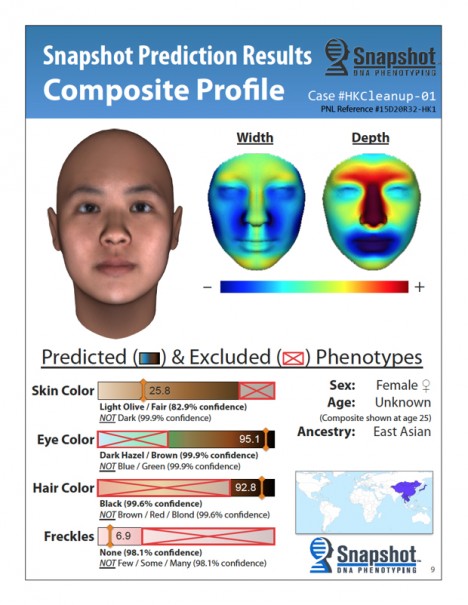 The Hong Kong Cleanup project highlights the fact that littering is out of control in Hong Kong despite fines equivalent to $200 US. The video warns would-be trash droppers: “Don’t let it be your face,” hopefully inspiring them to think twice before flicking a cigarette butt or flinging an empty coffee cup.