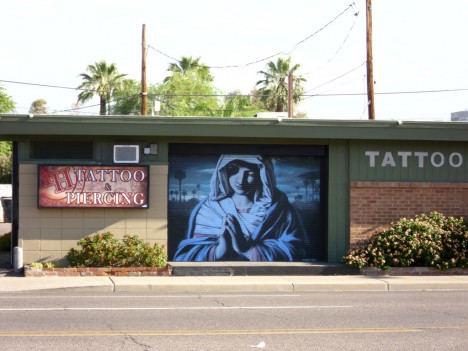 An exquisite mural of the Virgin Mary (Nuestra Señora de Coatlaxopeuh/Guadalupe) by street artist El Mac looks out from the roll-up door of the Love/Hate Tattoo and Piercing Parlor in downtown Phoenix… but only when the tattoo shop is closed and the door is lowered for the evening. Flickr user Classic Film captured the striking scene on September 7th of 2014. 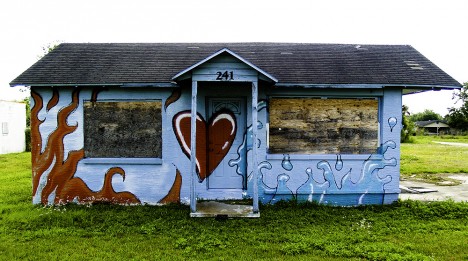 Flickr user Dan Tantrum (tantrum_dan) picked a fine day – April 20th, 2008 to be exact – to visit the boarded-up remains of “Best Tattoos by Rick Johnson”. It’s got to be the most cheerful building in Ocoee, Florida, although not having been to Ocoee we can’t guarantee that’s so. Neither can we vouch for the self-stated exemplary quality of Rick Johnson’s tattooing prowess but since his studio now lies abandoned, maybe “best” is a relative term. 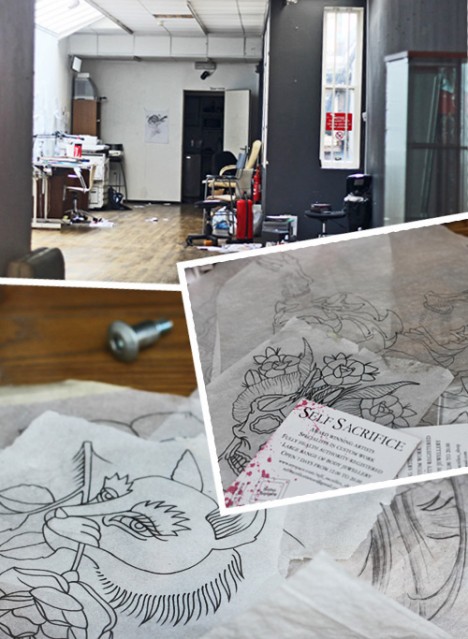 The above montage of Street Shots from an Abandoned Tattoo Parlor comes to us courtesy of Shayna, curator of Pattern Pulp Studios. It seems that sometime in late 2011, Shayna was making her way from Selfridges to Lambs Conduit Street in London when she chanced upon an abandoned tattoo parlor. Though locked up tight, a look through the front window revealed piles of tracing paper – patterns upon which tattoo artists used as their guide before inking actual skin. “It felt rather raw,” commented Shayna. “It’s hard to put my finger on it, but it was weird to see all the papers strewn about, knowing the designs were living on bodies around town. Almost made a larva to butterfly analogy in my head.” 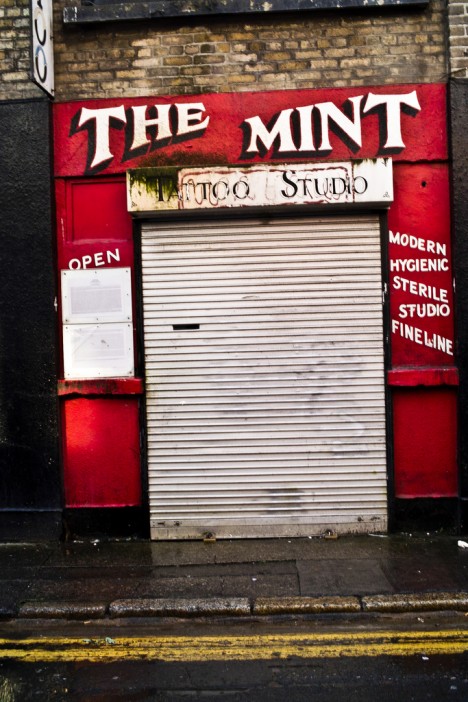 According to Flickr user William Murphy, The Mint Tattoo Studio in Dublin, Ireland may appear to be Open but that’s “not True”… and since he was there snapping the above image with his trusty SIGMA DP2 Point & Shoot digital camera on September 11th of 2010, we’ll just have to take his word for it. We gotta ask: who’s minding The Mint?