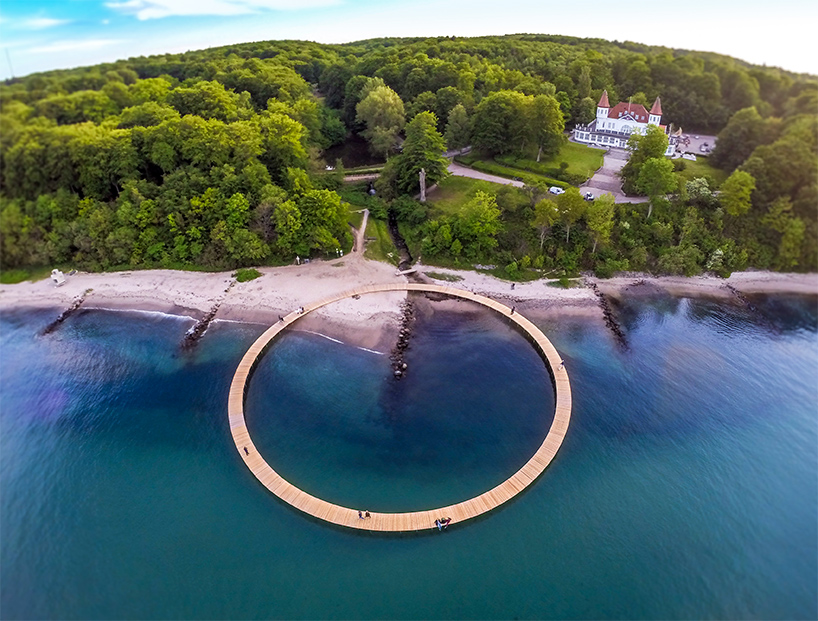 Bridges aren’t just a means of passing from one place to another along a linear path; they might offer a place for strangers to converge, provide a mostly decorative function or go nowhere at all. These highly unusual bridge designs aren’t packed with cities or vertical gardens, but they do turn conventional bridge typologies on their heads, whether they’re made entirely of compressed glass sheets, built by robots or held aloft by helium balloons. 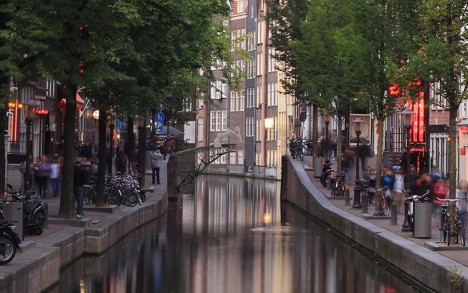 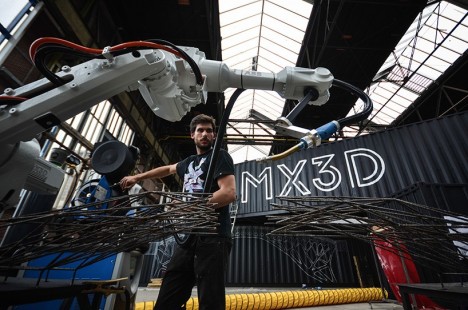 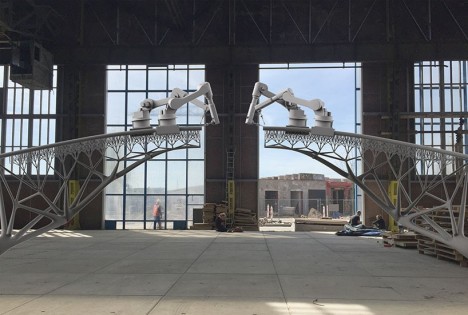 Amsterdam startup MX3D aims to build a 3D-printed metal bridge for the center of the city, incorporating complex geometries and employing the help of multi-axis industrial robots equipped with 3D printing tools and developed software. Designer Joris Laarman says, “I strongly believe in the future of digital production and local production, in ‘the new craft,’ This bridge will show how 3d printing finally enters the world of large-scale, functional objects and sustainable materials while allowing unprecedented freedom of form. The symbolism of the bridge is a beautiful metaphor to connect the technology of the future with the old city, in a way that brings out the best of both worlds.” 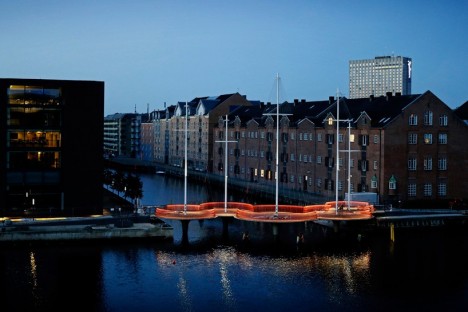 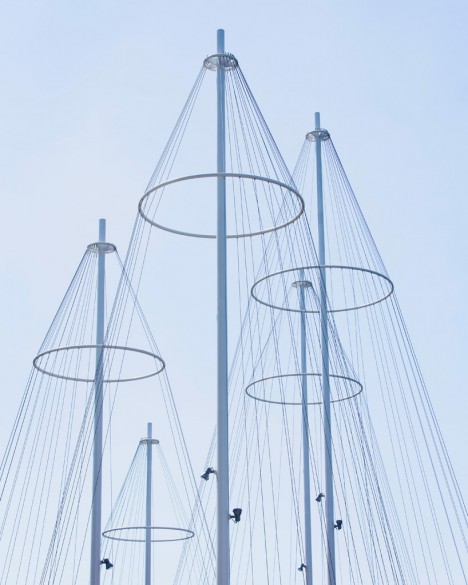 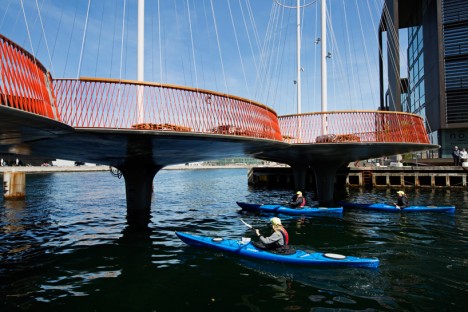 Stretching across a canal in Copenhagen, the new Cirkelbroen Bridge by Olafur Eliasson provides a vantage point and meeting place for pedestrians. Five posts echo the masts of ships above circular platforms, honoring the location’s nautical history. “In my art, I work with transient materials – such as wind, fog or flowing water,” says Eliasson. “It has been wonderful to have the opportunity to make a structure such as the Cirkelbroen Bridge, which embodies this transience – the changing of the weather and how this helps to create the waterfront atmosphere – but a bridge which has a long, stable life ahead of it at the same time.” 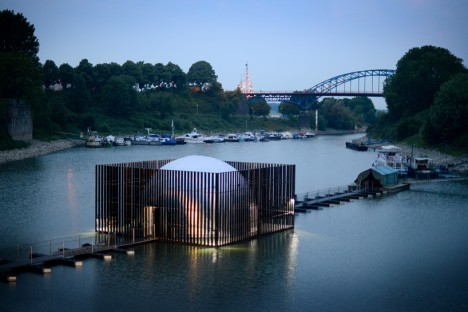 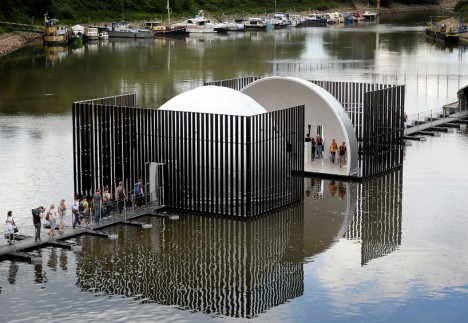 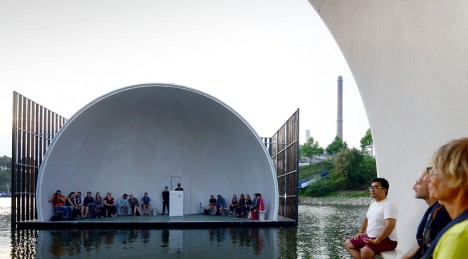 A dome on a fenced platform in the middle of the Rhine, this structure looks nothing like a conventional bridge, and it doesn’t work like one, either. A collaboration between five artists for an annual festival, ‘nomanslanding’ wasn’t made for the purpose of crossing the water, but rather uniting visitors from opposite shores in a symbolic gesture. The two halves retract into separate spaces or come together to form a united, chapel-like space of contemplation. “This walk-on installation is an attempt to bridge the divide separating us from strangers and to facilitate a meeting on common ground,” say the artists. “A space is created with a unique atmosphere in which people may reflect with each other on history, memories and experiences. 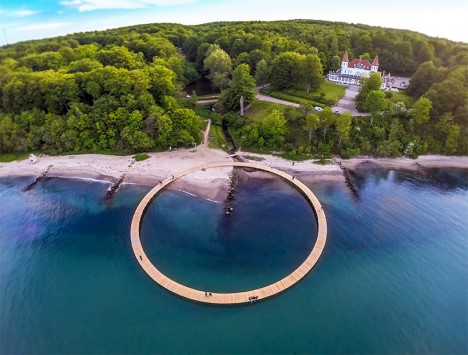 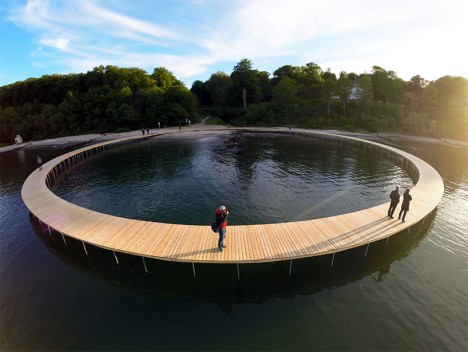 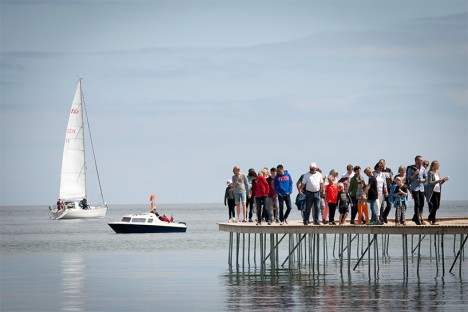 Created for this year’s Sculpture by the Sea festival, the ‘Infinite Bridge’ by Danish practice Gjøde & Povisgaard Arkitekter offers an entirely new way to experience the coastal landscape, jutting out over the surface of the water. Positioned just barely above the surface, the bridge has the potential to either stand several meters over the water or disappear in it altogether depending on the tide. 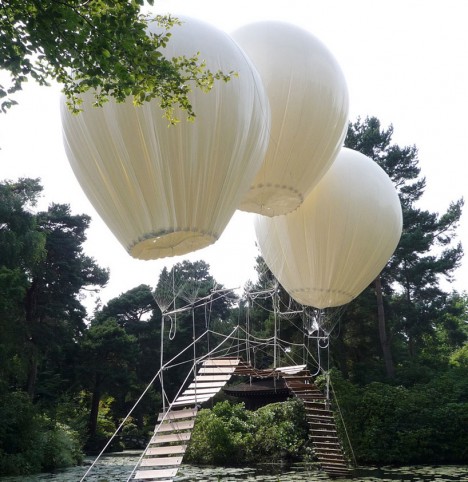 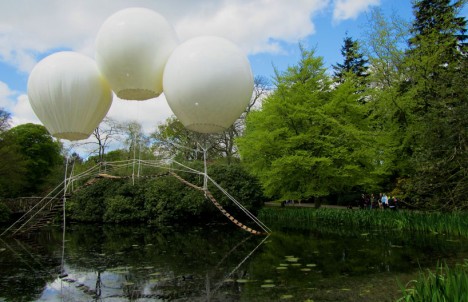 If crossing this bridge makes you feel nervous that the whole thing might suddenly fly away, you’re not being paranoid. Held aloft by three massive helium balloons, the only thing keeping it from drifting into the sky are a few tethers. Artist Olivier Grossetête installed the surreal featherweight attraction in Tatton’s Japanese Garden in the UK. A previous work, ‘Pont Suspendu,’ actually elevated the bridge into the air above Château Ferry Lacombe in France.