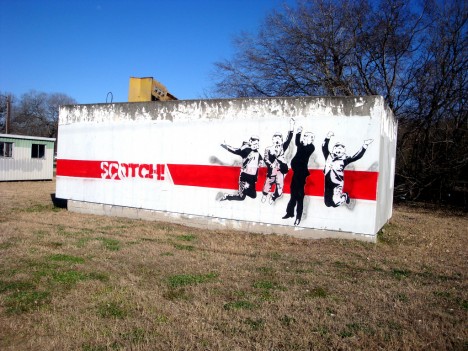 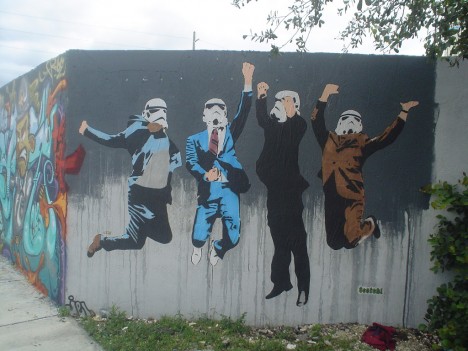 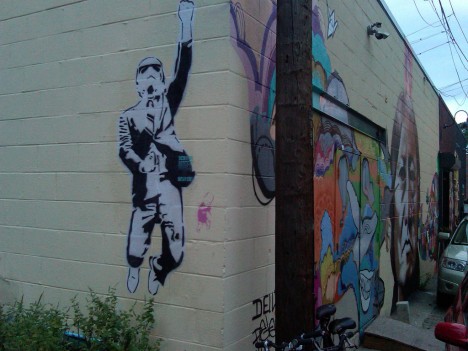 Flickr user Mr. Scotch! knows all too well that for street artists, stencils are the gift that keeps on giving. Check out the impressive mileage he got out of a certain set of Star Wars stormtrooper stencils between 2010 and 2011.

Service Without A Smile 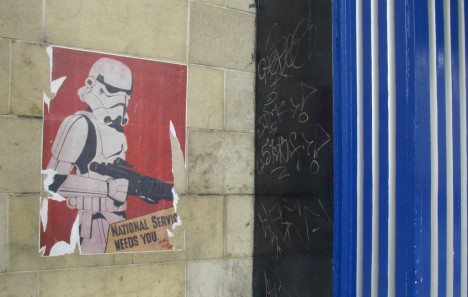 Flickr user Laura Froehlich (xoxoxenophile) snapped this fraying stormtrooper poster in Edinburgh, Scotland – home of Trainspotting, among other things. Froehlich snapped the battered banner in May of 2013; one wonders how well it’s held up since then considering the oft-inclement Scottish climate. 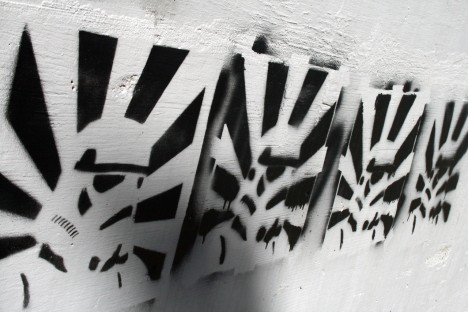 Flickr users me and the sysop, Adrien Tougas, and Liz Wong probably don’t know one another though the examples of starburst stormtrooper graffiti they captured in places like Astoria, Oregon and Austin, Texas share a remarkable similarity in style. 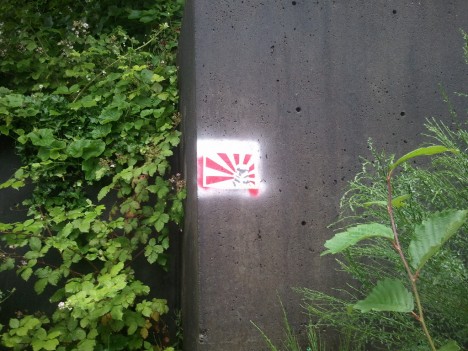 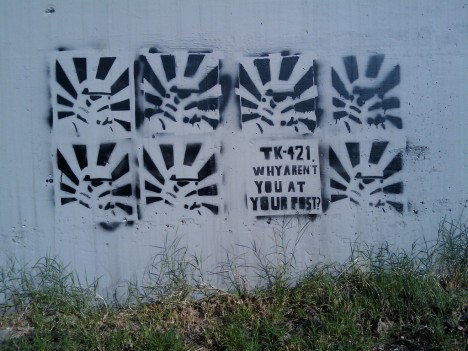 That’s the cool thing about stencils: after being disseminated person-to-person or online, graffiti artists anywhere in the world can employ them as ready-made templates – artistic talent not required. 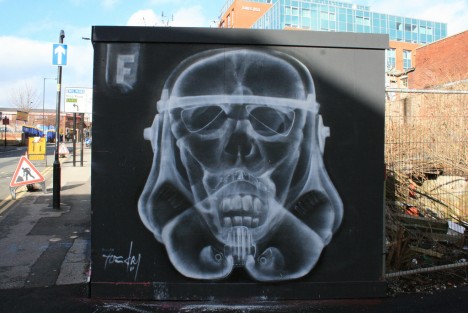 Ever wonder what’s behind a stormtrooper’s mask? Be careful what you wish for… Flickr user KylaBorg snapped this irradiated Imperial infantryman glaring out from the side of a transformer box on Sheffield, UK’s Arundel Street. May the electrical force be with you! 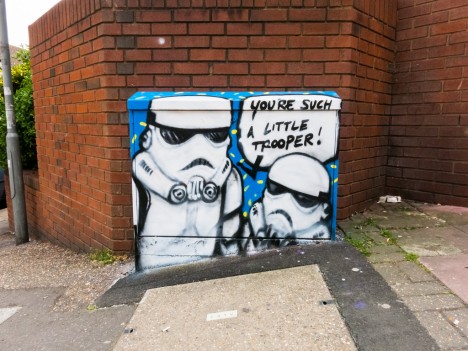 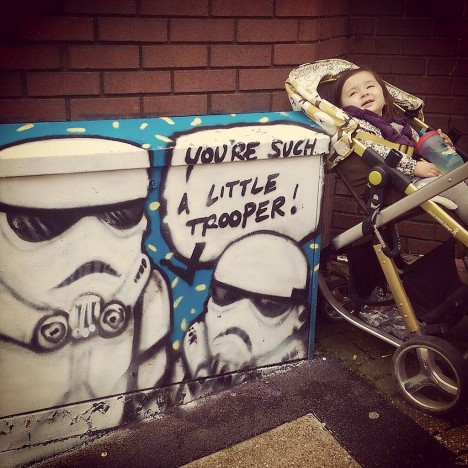 All the walls in Brighton, UK aren’t enough to hold the huge volume of graffiti just waiting to be applied. Thank goodness there are plenty of dumpsters available to take up the slack. Flickr users BMiz and Tavern Brighton both snapped the snazzy big box above in 2015. 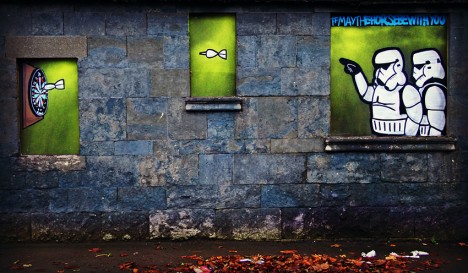 Sadly for the citizens of Kingsthorpe in the English east Midlands, the venerable White Horse pub has closed its doors for good. Non-citizens – non-terrestrials, to be exact – seem to be carrying on as if nothing happened, however. Flickr user Jason Rodhouse (Jason 87030) snapped these stormtroopers at leisure on December 28th, 2015. 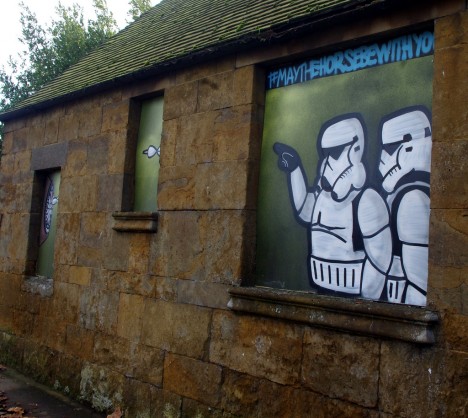 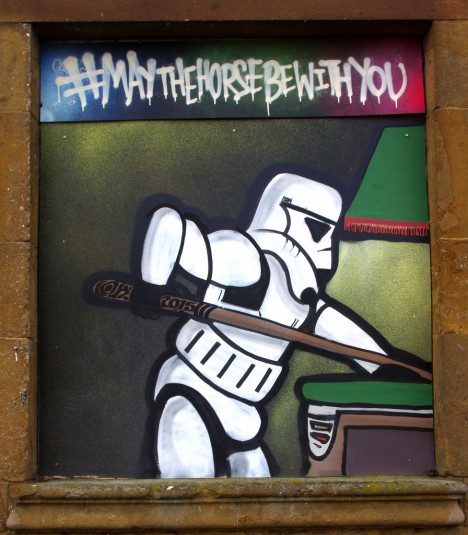 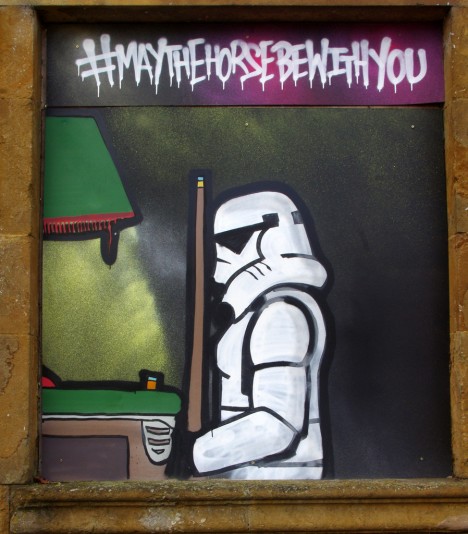 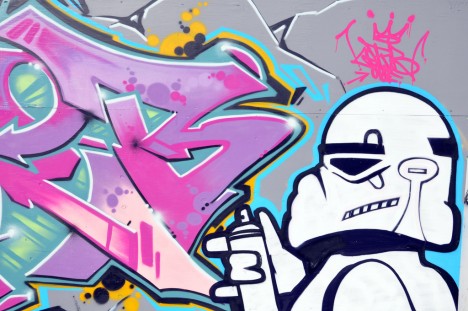 Doubtless Lord Vader would take a dim view of stormtroopers snapping selfies but thanks to the clone-like anonymity of the standard stormtrooper suit, the above auto-graffiti artist gets off scot-free. Credit Flickr user Dan Whiting (Zombie Swagger) of Wellington, New Zealand for capturing this colorful caught-in-the-act composition on May 22nd of 2010. We just have one question… who sprayed first?