As roads closed and kids turned staircases into sledding hills and snowboarding slopes across East Coast cities during Jonas, one photographer stopped to shoot a few pictures that turned out looking like modern-day impressionist paintings. 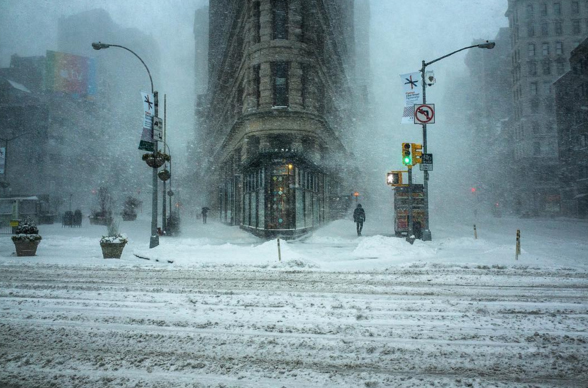 Photographer Michele Palazzo managed to capture not only the swirling snow around the structure, but an installation of snowflakes inside mirroring the exterior weather. Despite Sprint and Apple logos, hallmarks of the present age, there is something timeless about the composition.

According to Colossal, “the snowflakes you see in the window of the Flatiron are part of a paper origami installation by Chelsea Hrynick Browne in the Prow Artspace. The cloudy atmosphere and gusty winds creates patterns that appear uncannily like brush strokes. You can see more of Palazzo’s shots from the morning of January 23rd on EyeEm.” (See more storm photos, thumbnails above, over at the EyeEm Blog).