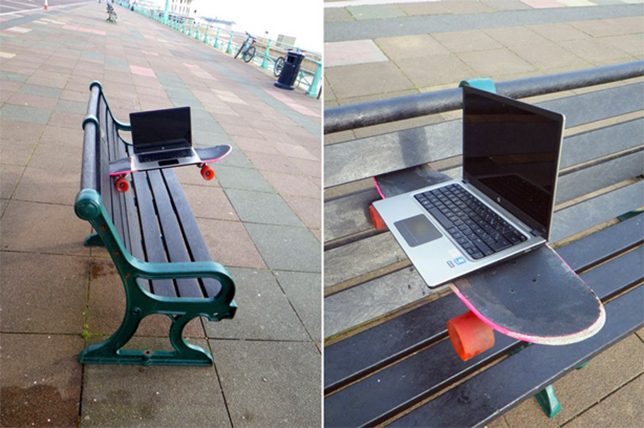 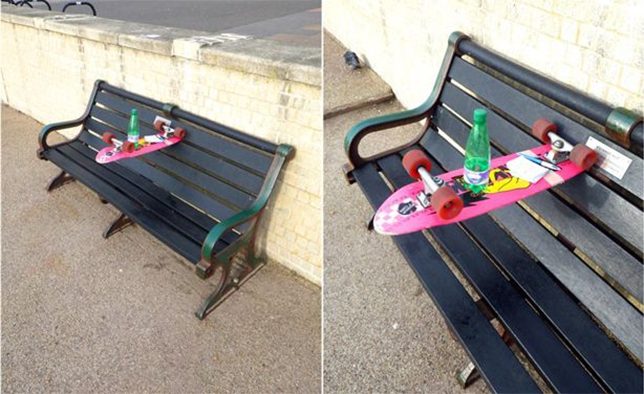 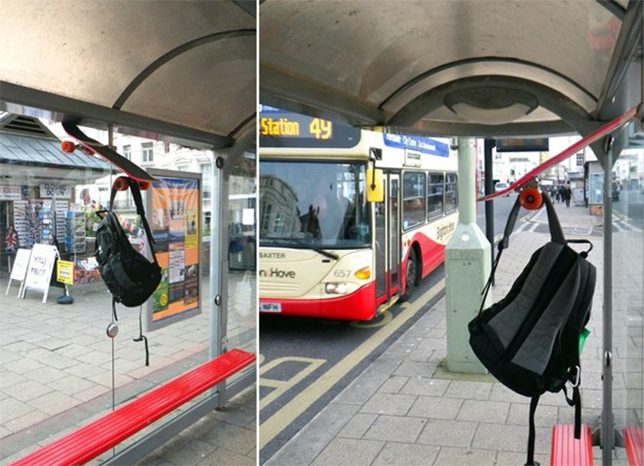 Hacktivist Florian Riviére proves the urban versatility of skateboards with this project, reimagining what they have to offer in public spaces. The curved nose of the board is used to mount it between the slates of a bench as a table, hook onto a bus shelter as a backpack hanger and attached to a leash to carry heavy objects down the sidewalk.

“Nobody walks in Los Angeles, and who doesn’t know how to use a crosswalk anyway?” says artist Jason Eppink of his ‘Total Crisis Panic Button,’ which replaced LA crosswalk instruction signs with “more relevant and useful instructional graphics.” Eppink didn’t even have to take photos of the installation, since delighted pedestrians immediately began posting to social media when they came across the signs. You can download the sign at his site, print it out and install it in your own city. 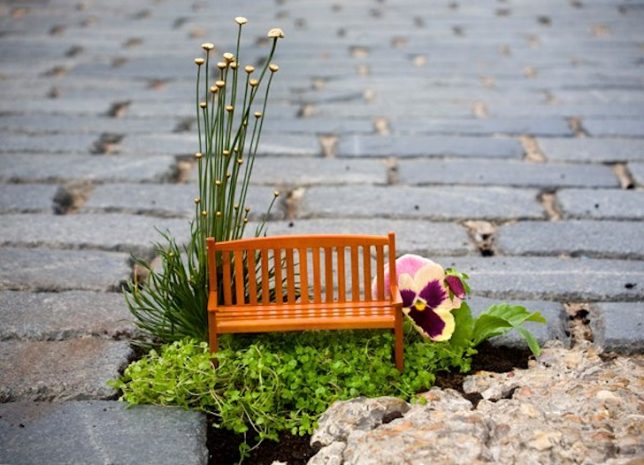 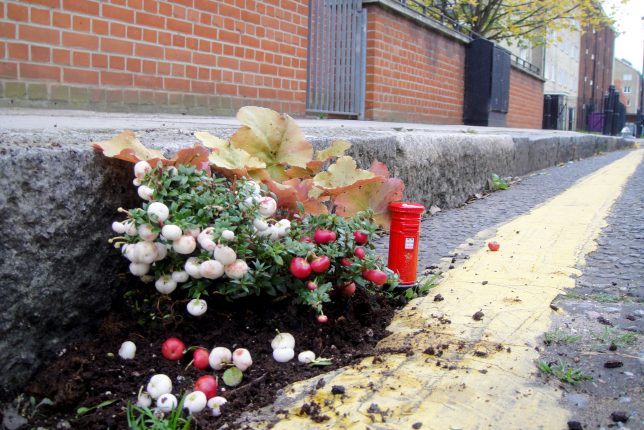 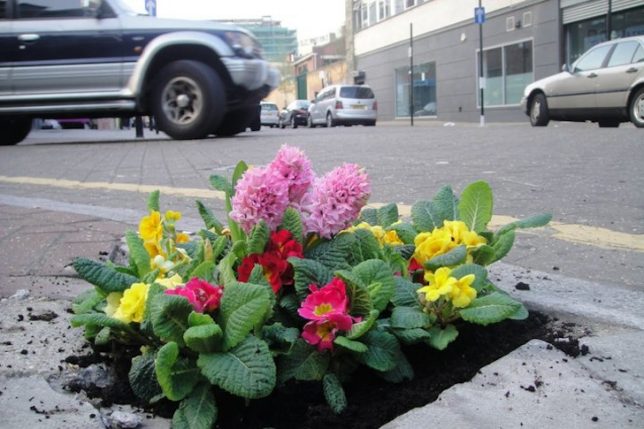 It’s a lot harder for cities to ignore surfaces that need work when potholes are highlighted by adorable tiny guerrilla gardens. The Pothole Gardener mostly sticks to sidewalks and pedestrian routes instead of streets to preserve the miniature installations, but their purpose is mostly to brighten up the grey city of London, which is lacking in green spaces. 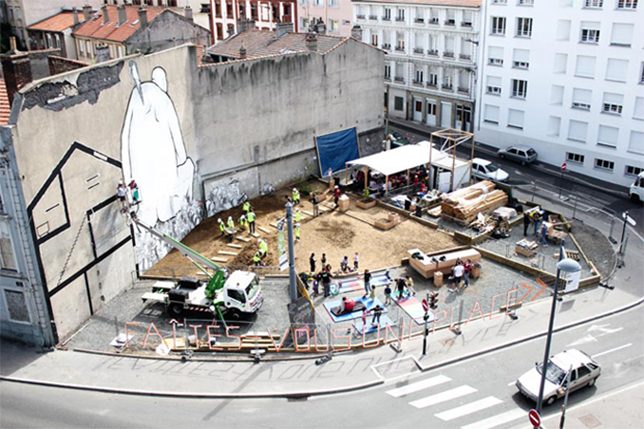 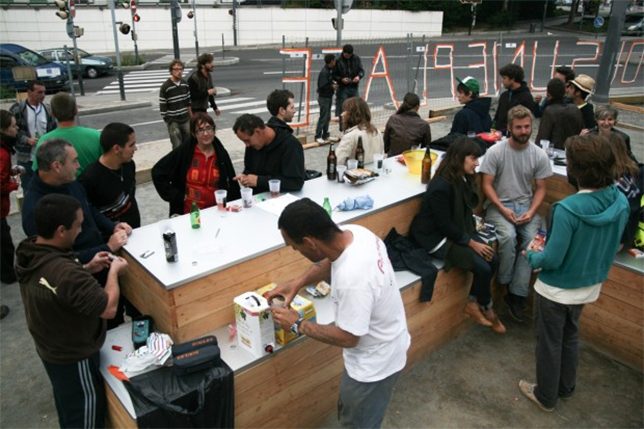 Residents of Saint Etienne in France took a disused square into their own hands as a temporary public space, self-managing it as a community garden, carpentry workshop, outdoor theater and a venue for round-table discussions. ‘Place au Changement,’ the Square of Change, occupied a formerly public plot of land prior to its takeover by developers as a site for new apartments and found ways to make it valuable to city residents, stirring up daily activity of spontaneous uses and getting people thinking about what kinds of interactive and community-building features they want in their neighborhood.

Sand Dragon Sculpted in the Middle of Road Construction 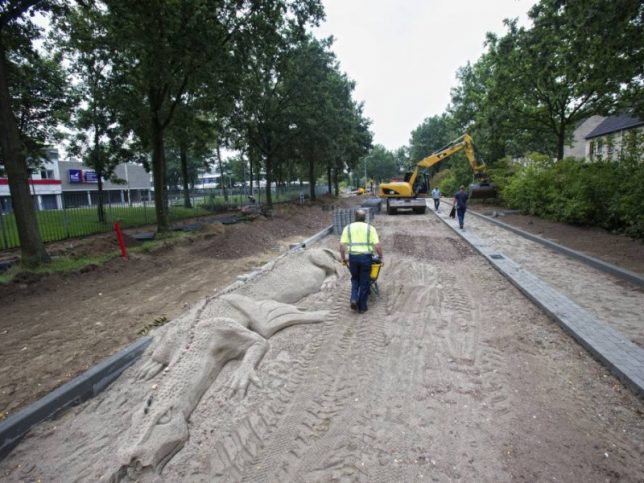 Construction workers in the middle of road construction in Ede, The Netherlands returned to their job to find that a dragon had sprouted up in the sand overnight. The temporary sculpture was almost immediately destroyed by rain and then covered up with bricks, but it was fun while it lasted.