China’s first aerial bike path spans nearly five miles, raised over streets and highways and connecting six public transit hubs in the heart of Xiamen. If the new route is even close to as successful as its designers and planners expect, it could help usher in a new cycle-centric transport paradigm across the country.

Sixteen feet wide, the bike-and-pedestrian pathway network can accommodate 2,000 or more bicycles per hour. At night, 30,000 lights allow travelers to continue using the paths safely. Its planners anticipate an influx of ridership and have a system in place to actually close down the on ramps if too many bikers are already on the path. 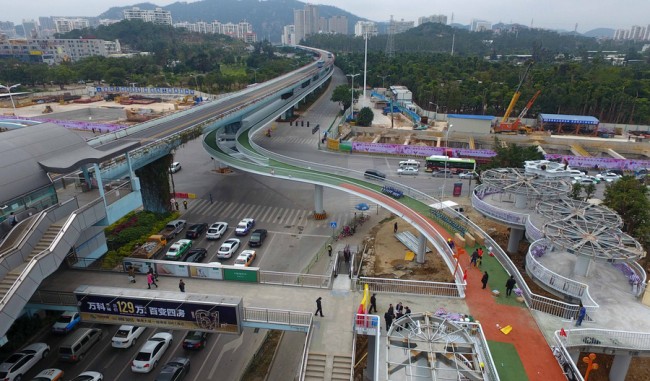 Some sections of the cycleway are positioned under overhead mass-transit express lanes, offering some shelter from the elements (and less noise than riding alongside). Along the route, riders access the system via a variety of ramps tied into the city bus and subway system, aiming to bridge the gap between various forms of transportation. 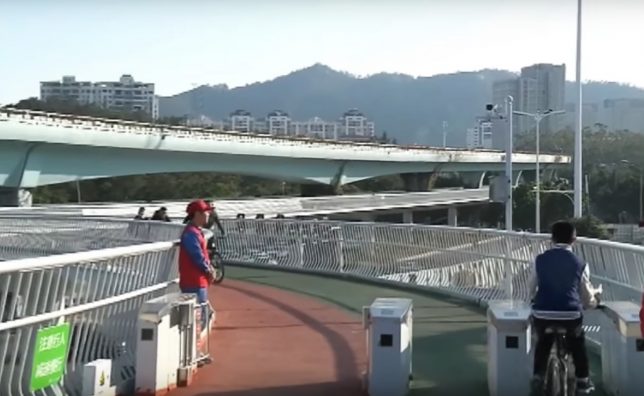 Would-be bikers can also pick up bicycles via a ride share system positioned at entry and exit points. If the system does reach full utilization, city officials may extend the network further in the near future. Other cities in China (and around the world) can also look to this integrated system for inspiration for similar bike-oriented urban design strategies.