Before WiFi and smartphones stole their thunder, internet cafés like these closed and abandoned relics offered cheap & easy access to the World Wide Web. 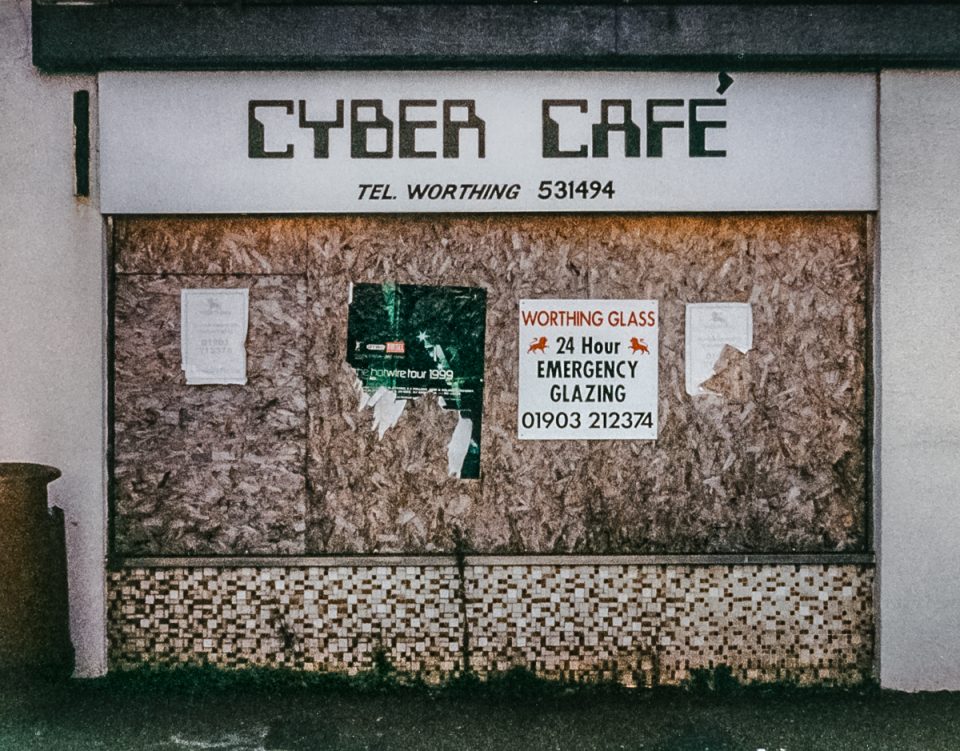 As the original public hotspots for intrepid internet explorers, these ‘net cafés were homes away from home, free from nagging parents and other annoying housemates wont to pick up the phone while you’re trying to download a GIF. 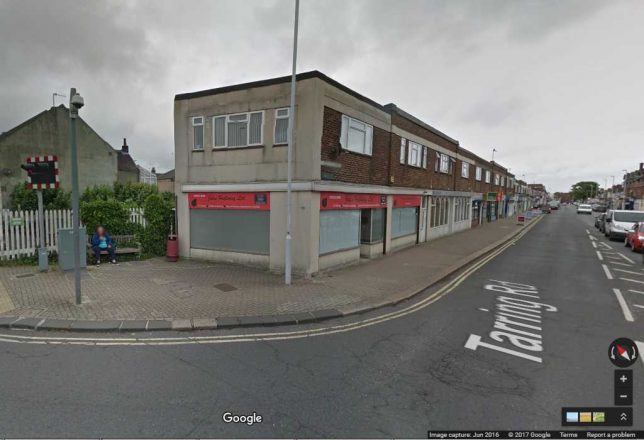 The Cyber Café in Worthing, West Sussex, UK was one such early example. Shopfront Elegy saved some snaps of the closed café circa 1999. Note the charming conjunction of the sign’s hand-painted digital type with the classic mosaic facade below. Sadly, both were lost in the unit’s 2015 renovation as Attic Solutions.

A Galaxy Far Far Away 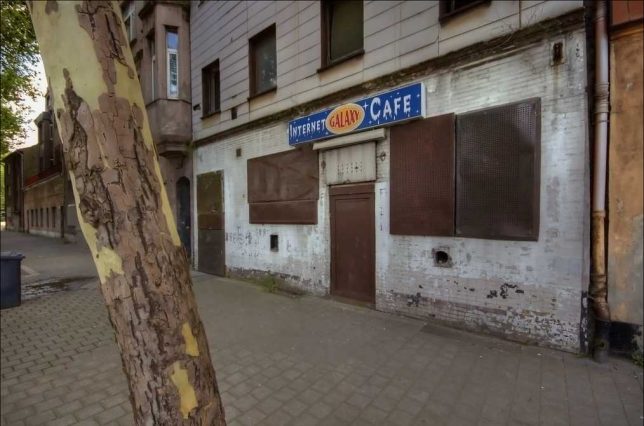 The heyday of internet cafés lasted about 15 years give or take a few, with the first practical operations opening in the early 1990s. By the end of the next decade, however, the increasing power and utility of Apple’s iPhones and their ilk began to narrow the cafés’ market niche. Flickr user Johan van Elk (jmvanelk) captured the late & unlamented Galaxy Internet Cafe – no accent – in Duisburg, Germany, on July 28th of 2009.

Wanks For The Memories 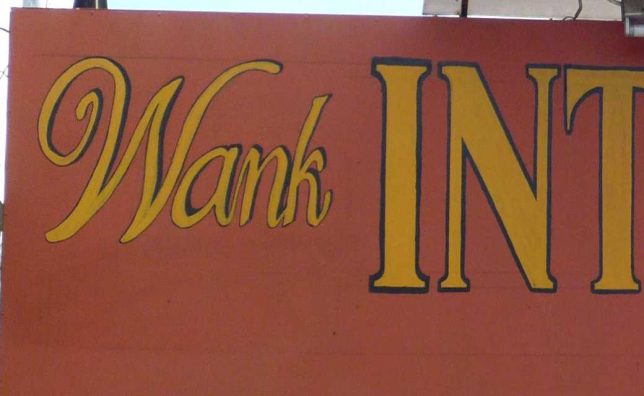 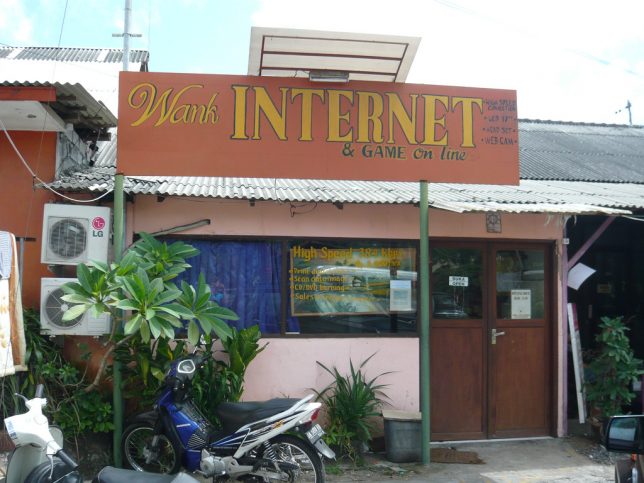 Flickr user Ivan Bandura (mac_ivan) just couldn’t resist snapping the Wank internet café during a visit to Bali, Indonesia in the summer of 2009. One presumes he maintained control of ALL of his other urges as well. It may well be that the rise of online p0rn and the need (by most purveyors, at least) for privacy whilst viewing such contributed to the decline of ‘net cafés in recent years. 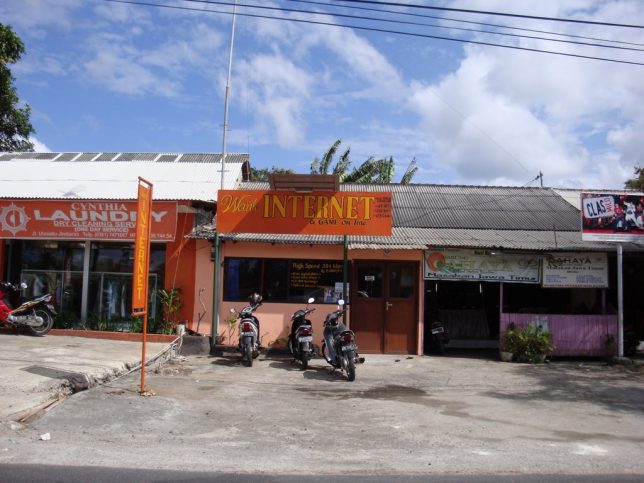 In any case, a more recent photo indicates Wank patrons – “wankers”, if we may – will need to get their kicks somewhere else as the AC units and decorative storefront potted plants have been removed. 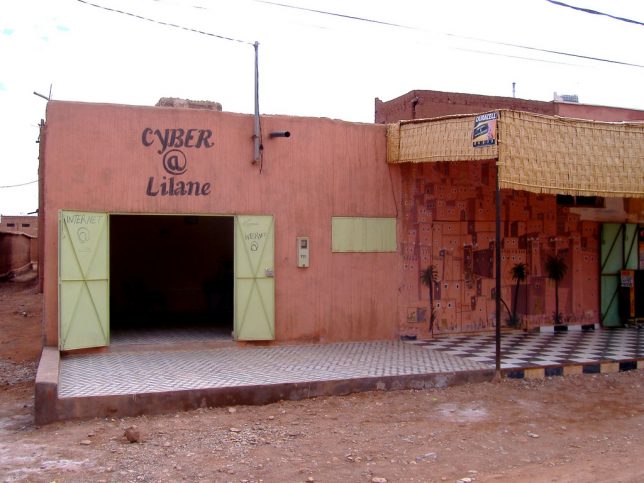 Flickr user Michela (micny259) snapped this sun-baked empty internet café “somewhere close to Ouarzazate” in south-central Morocco on November 4th of 2006. The age of the image notwithstanding, internet cafés enjoyed a generally longer lifespan in developing nations due to lower per-capita GDPs. No telling if the pretty-in-pink [email protected] is still operating today, though it’d be cool if it had been bought out by a bitter and lovelorn American expatriot and re-named Rick’s Internet Café Américain. Here’s lookin’ at you, cyberkid. 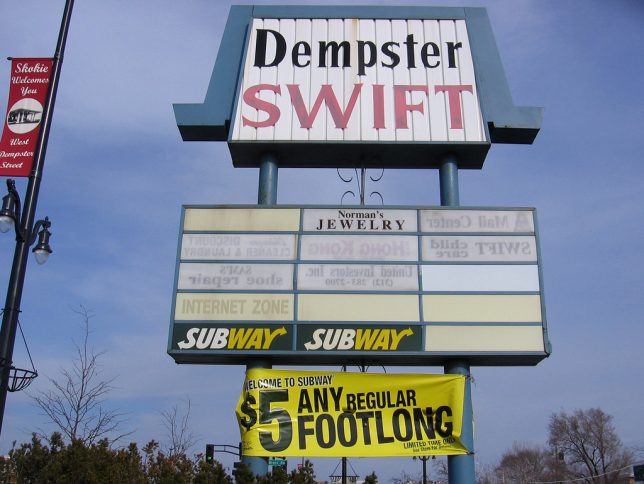 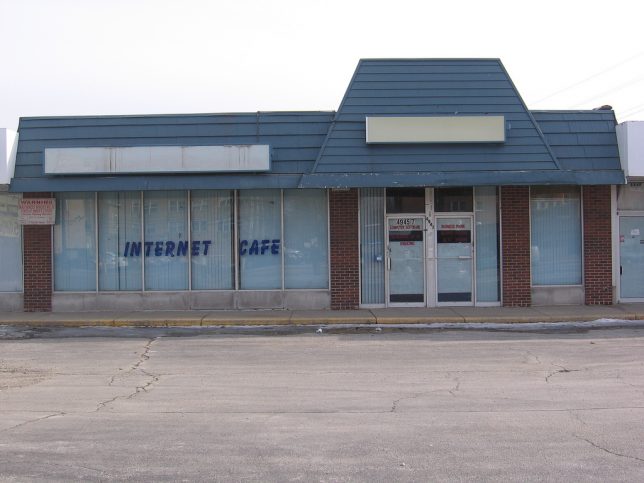 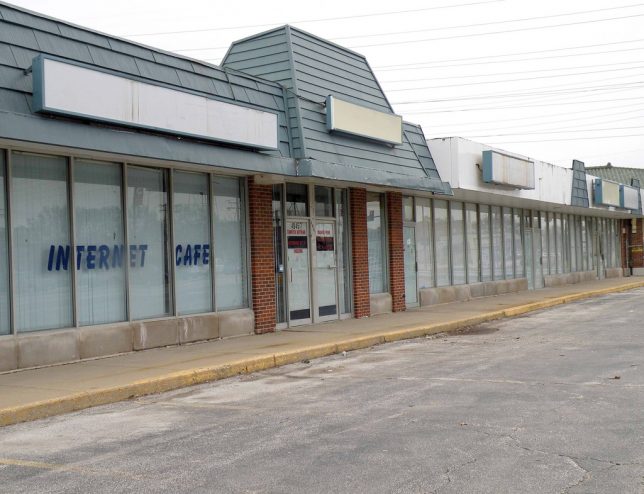 Ahh, Skokie, home of those hateful Illinois Nazis and this abandoned internet café in a mostly deserted strip mall. Who can say why this cybercafe couldn’t cut the mustard – easy access from the Yellow Line should have appealed to area non-drivers. In any case, Flickr users Katherine (katherine of chicago) and Marshall Rosenthal (mmmmarshall) captured the former Internet Zone‘s eerily anonymous state on March 26th, 2008 and April 2nd of 2009, respectively. Speaking of eerie, why does this miserable plaza boast TWO Subways? 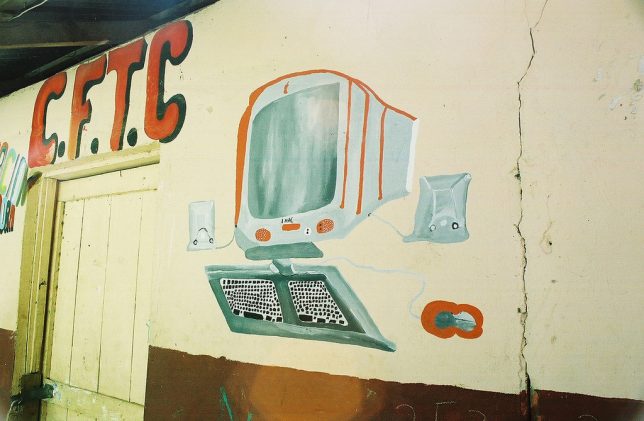 Flickr user benwagner chanced upon an abandoned internet cafe in Cienfuegos, Santiago, Dominican Republic, on April 29th of 2007. Though amateur and folk-artsy in its execution, the graphic representation of an iMac painted on the café’s outside wall is well worth a thousand words. Or, say, a couple. 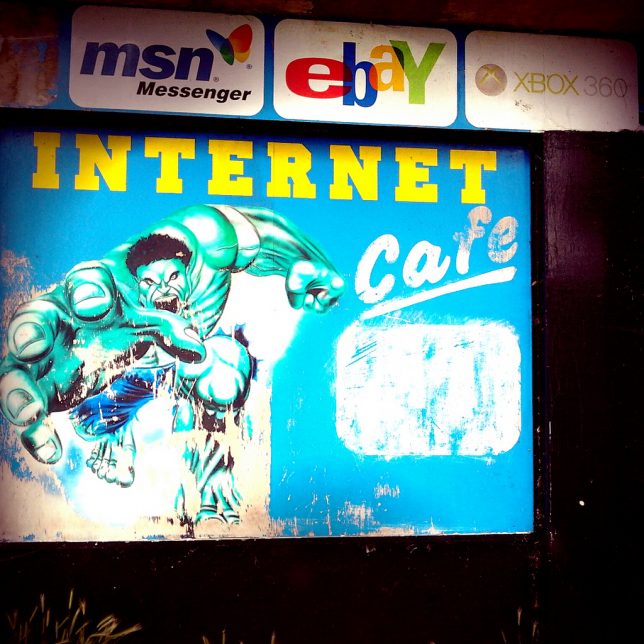 You gotta admit, this internet cafe’s graphics really reach out and grab ya! How bow dah, Donald? You’ll find this closed internet café in Higham Hill, East London. Flickr user zall krishna (iotar) captured the café’s “hulking” facade in all of its sun-faded glory back on June 26th of 2013, several months after MSN Messenger was discontinued. Coincidence, or merely convergent devolution? 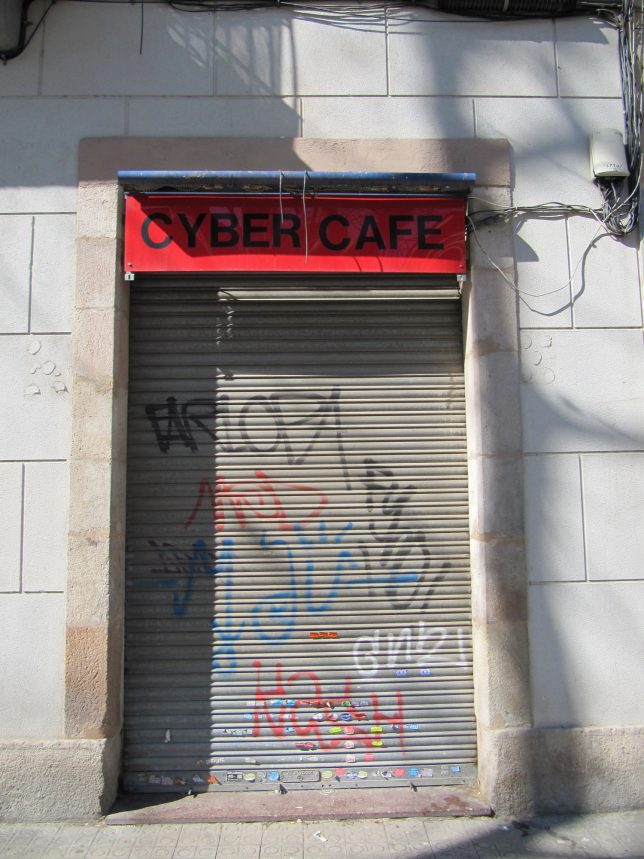 There’s not much we can say about the above closed and abandoned internet café above, other than that its graffiti-encrusted roll-down corrugated metal door looks out onto downtown Barcelona, Spain. Maybe that’s all you need to know… or WANT to know. Move along, citizen, nothing to see here.