This past Saturday, Trump supporters and counter-protesters from the left clashed violently in liberal Berkeley, all while one intrepid street painter captured the scene live on canvas. As reporters filmed and photographed the chaos, John Paul Marcelo biked his mobile painting station into place.

At Least 15 Arrested Amid Violence At Alt-Right Rally And Counter Protest In #Berkeley https://t.co/AC1uxsV9HT pic.twitter.com/TpPFilrz3l

Protests against Milo at UC Berkeley. Protesters chanting “This is what community looks like.” pic.twitter.com/a0YIZ3epIc

The alt-right rally organizers and their opponents arrived ready for a brawl, variously equipped with shields, helmets, wooden poles, pepper spray and other weapons. “By mid-afternoon,” reports Blake Montgomery, “the dueling protesters were screaming insults at each other over a flaming pile of trash and using a dumpster as a battering ram.” In the end, dozens were arrested on both sides.

But in the midst of the mayhem (or at least: slightly off to one side) was perhaps the most unexpected sight of all — Bay Area street artist John Paul Marcelo standing his ground and calmly painting the chaotic scene as it unfolded before him.

My favorite Berkeley riot moment: the street artist who strives to capture the conflict between alt-right and black bloc, pepper bombs & all pic.twitter.com/Lqam1Ccasi

Marcelo is a fixtures of the San Francisco community, a fifteen-year resident who can be found painting ordinary street scenes as well as timely and tragic still lifes, like: a building just after a fire, burnt out and abandoned. 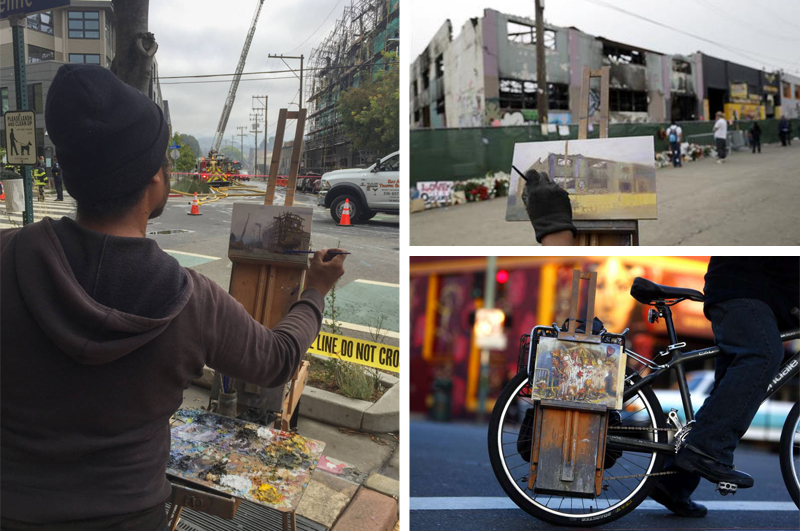 His artistic gear collapses on demand, folding neatly for transportation by bike to events unfolding in around the Bay or calmer, more everyday still-life subjects (below: Morning on Broadway and Telegraph in Oakland as seen in Cafe 817). 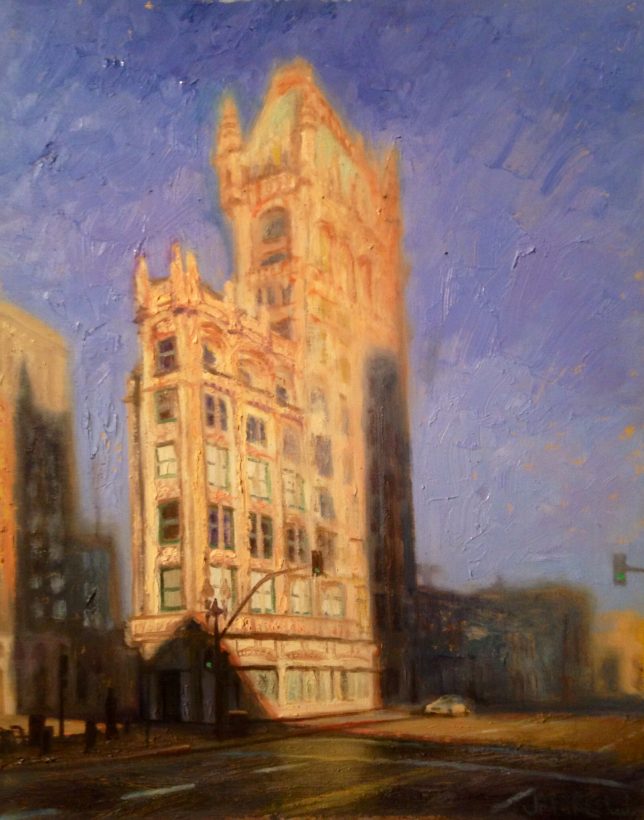 John Paul Marcelo studied graphic design and advertising, then started painting the urban decay of Chicago streets and decided to “reject modern technological mediums” and “paint exclusively en plein air, and migrate to the majestic California coastline.” And although he reports being “very content with painting existing idyllic scenes like Big Sur and Marin, past expeditions have brought him to places like post Katrina New Orleans and Cabrini Green housing projects.” His influences “include Claude Monet, James Nachtwey, and Ai Wei Wei.” (Images via AP, SfGate & KQED)