Anyplace can be an Airbnb – including vans, sheds, housing that should rightfully be for rent to the city’s residents, and cozy rooms ‘by the metro’ that turn out to actually be in the metro station. In fact, the latter example is on display in the metro station Wibautstraat in Amsterdam’s city center right now, walled off with glass to put guests on full display of commuters in a commentary on how misleading and harmful listings on the travel accommodations website can be.

Created by Dutch artist Boudewijn Rückert, the installation could be read in a variety of ways without context. If you didn’t know the artist’s intentions, you might think this was an advertisement, or an unconventional room made available by Airbnb as a promotional stunt. But lean in and take a close look at the placard accompanying the exhibition. 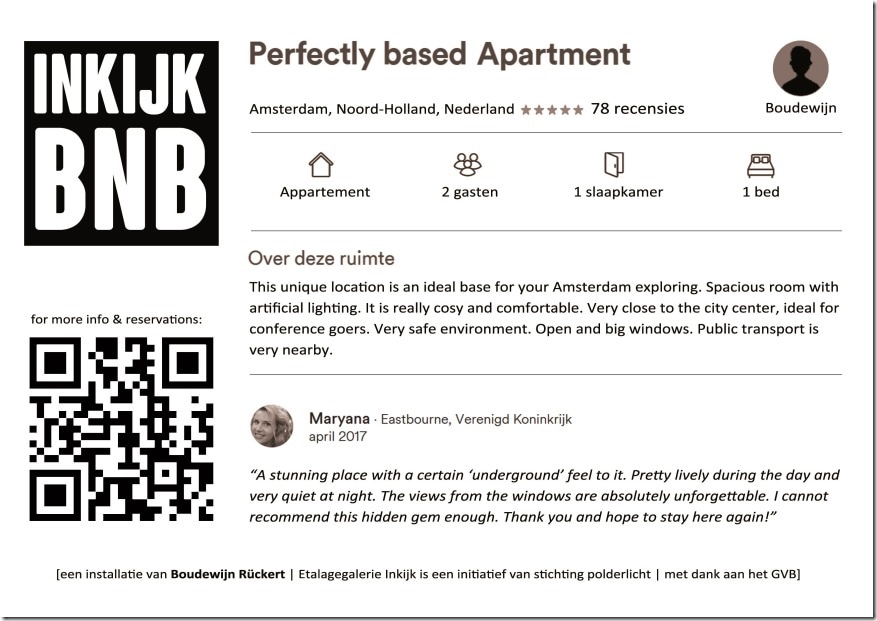 The text reads, “This unique location is an ideal base for your Amsterdam exploring. Spacious room with artificial lighting. It is really cosy and comfortable. Very close to the city center, ideal for conference goers. Very safe environment. Open and big windows. Public transport is very nearby.”

As Rücker notes on his website, roughly 15,000 homes are currently offered “as a permanent holiday” in the city, excluding them from housing and contributing to gentrification. Plus, the way these accommodations are typically styled makes them exceedingly generic in the sterile Silicon Valley aesthetic increasingly referred to as ‘Airspace.’

The artist outfitted the room in furniture and decor you could find in any city around the world thanks to Ikea, along with “a butt-ugly vase with plastic flowers,” with nothing but a photo of an Amsterdam ferry on the wall to hint at the room’s geographic location.

While he’s aware that the installation is bound to press the buttons of Airbnb fans and perhaps the company itself, he hopes it will stimulate conversation around how renting out all these rooms is affecting the lives of people who live in the host cities – a controversy that’s definitely not limited to the city of Amsterdam.