Despite the old maxim that living well is the best revenge, these homeowners have chosen to creatively spite busybody neighbors and inflexible authorities. 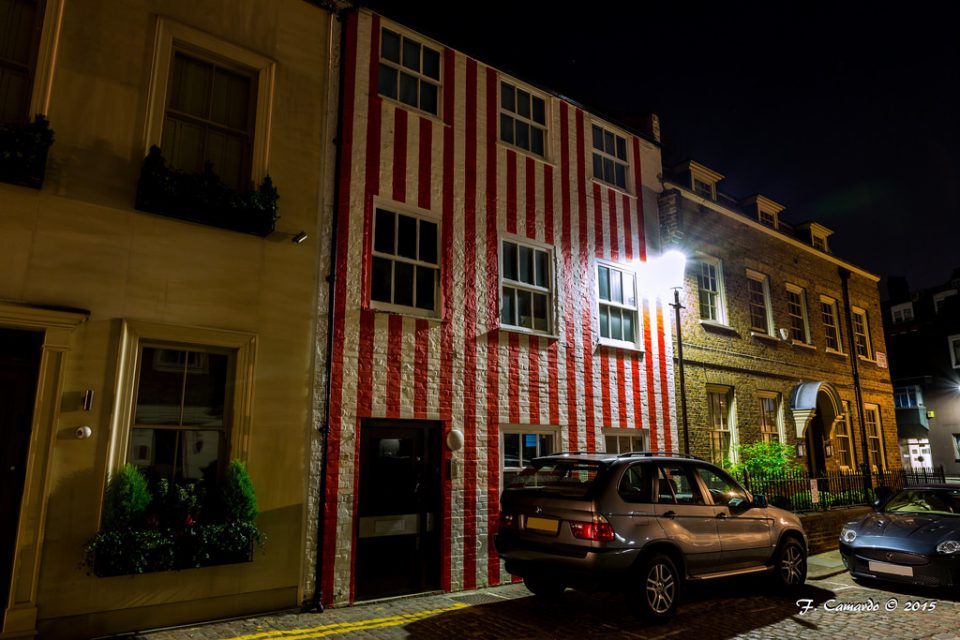 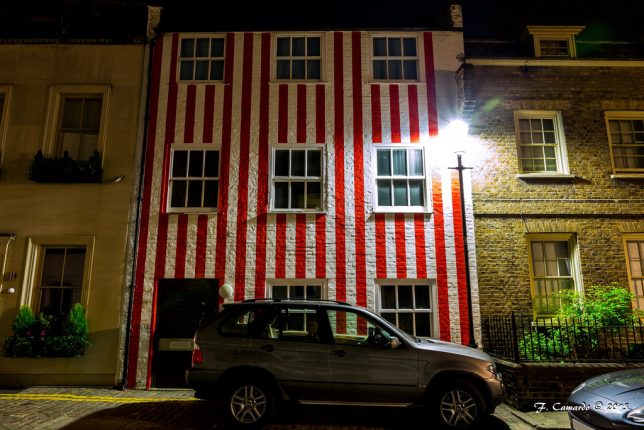 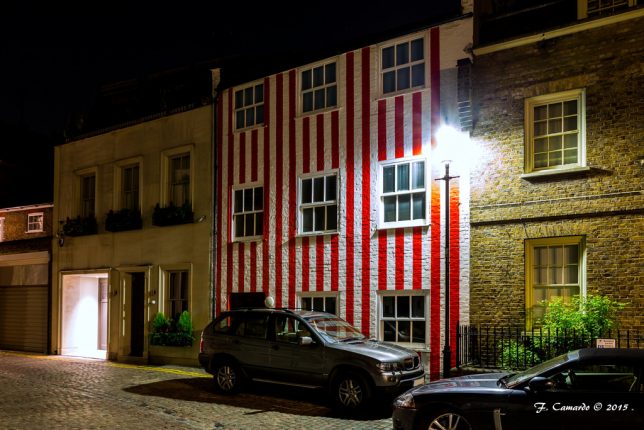 Zipporah Lisle-Mainwaring can afford to live life lushly in the posh London neighborhood of Kensington while spending the off-season in Switzerland, yet the now 67-year-old property developer has spent the past five years constantly quarreling with her neighbors and the local council. The trouble began in 2012 when Lisle-Mainwaring bought a charming white stucco townhouse and applied for a permit to construct an “iceberg basement” beneath the edifice… permission was denied. 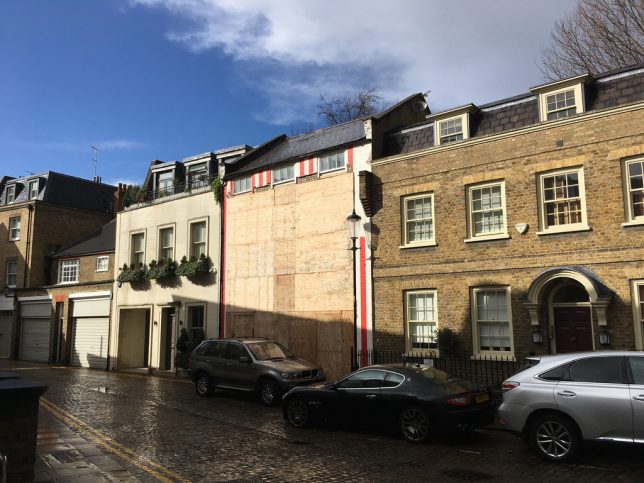 Subsequent basement planning applications were refused as well, so in March of 2015 Lisle-Mainwaring spited both the haughty council and her snooty (snotty?) neighbors by painting the facade of her townhouse in garish red and white stripes… with the last stripe left unfinished just to add visual insult to injury. Flickr member Francesco Camardo‘s nighttime photos above highlight both the paint job (which took just over five hours to semi-complete) and the stuccoed wall’s rich texture. 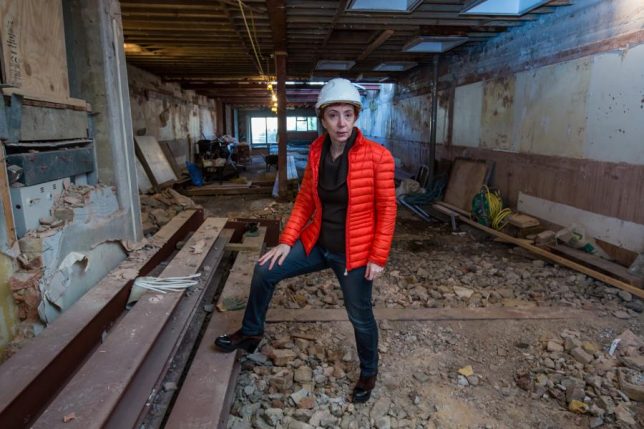 Fortunately or unfortunately, depending on one’s POV, a court order handed down in January of 2016 declared the striped house “had an adverse effect of the amenity of the area” and ordered Lisle-Mainwaring (above) to return it to its original state within 28 days. Instead, the peeved homeowner has chosen to level the existing structure and erect a four-story-plus-basement home on the lot, ensuring many months of noise, dust, traffic and inconvenience for her neighbors. Now that’s Maximum Spiting for ya! 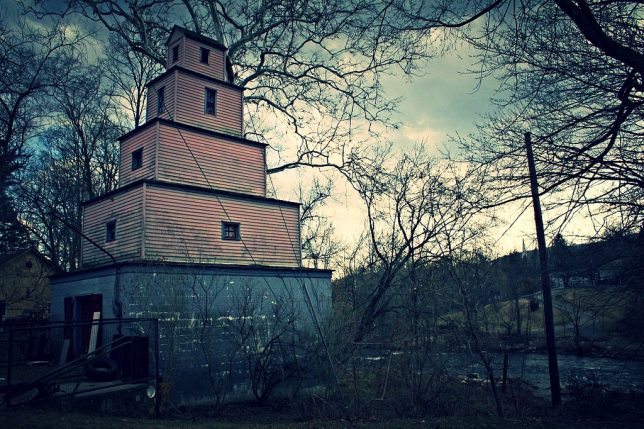 Some say there are no gossips like New England gossips and when giving condescending townsfolk the literal finger won’t shut ’em up, building an architectural up-yours is the next logical step. Speaking of steps, the step-pyramid-like Wedding Cake House in Gaylordsville, Connecticut really takes the, er, cake when it comes to spitefulness. 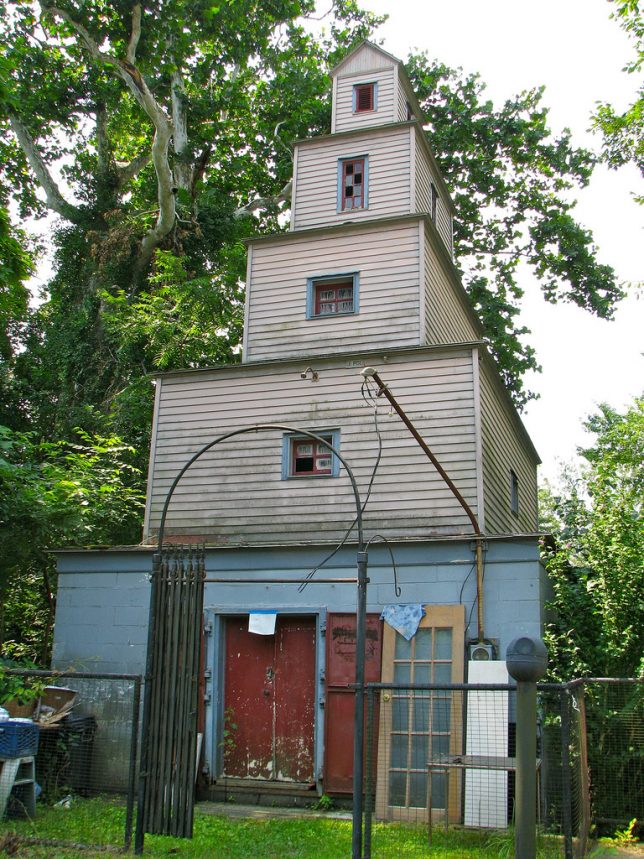 Back in the early 1960’s, the state Child Welfare Department removed an infant girl from the custody of homeowner Jan Pol’s foster daughter. Rumor had it the baby was fathered by Pol; something he furiously denied. In protest, Pol built the faded pink structure yet never lived in it a single day up until his passing in 1979. Flickr members Walking Philly and Beyond and howderfamily.com snapped the spiteful structure in 2012.

Going through a bitter divorce? Best to dissect the separation agreement with a fine-toothed comb and a magnifying glass lest ye end up like a certain bamboozled wife back in the Roaring Twenties. In a nutshell, it seems the husband was required to build his soon-to-be-ex-wife an exact replica of the pretty pink home in downtown Newburyport that they once shared. 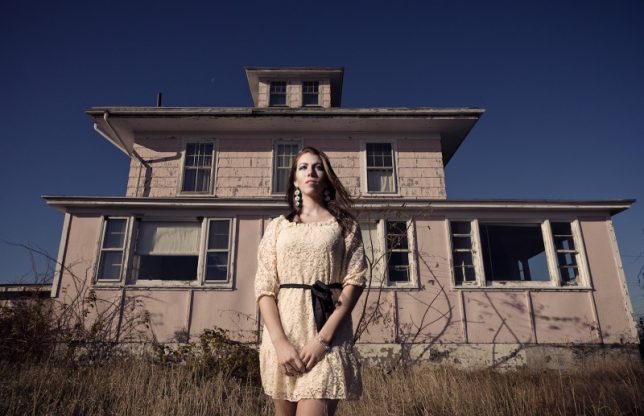 Fine and dandy, but she should have checked the fine print: the agreement didn’t state where the replica house had to be built. Once she’d signed on the dotted line, the spiteful ex-hubby constructed the duplicate home way out in the middle of a salt marsh on deserted, wind-swept Plum Island. 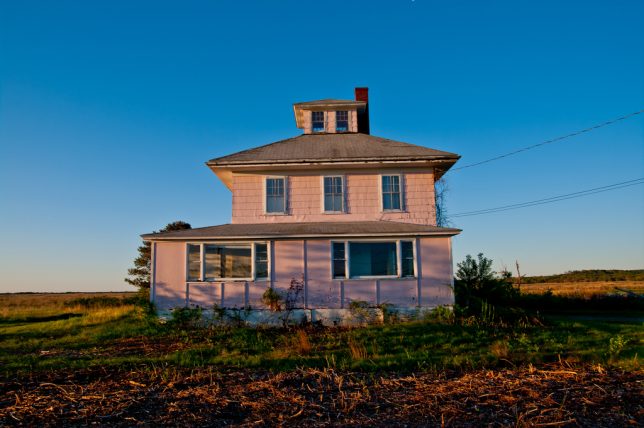 It’s not known if the chagrined ex-wife actually lived in the Pink House – without any connection to utilities it would have been difficult to say the least. People did live there later on, however. One family owned the house from 1960 through 2012, eventually selling the house to the Parker River National Wildlife Refuge who are determined to demolish the lead-painted, asbestos-insulated and radon-infested house. Kudos to Flickr members Ron Grant (old 41), Jacob Taylor, and Bud (Bud in Wells, Maine) whose images above capture the Pink House’s essential beauty, sadness and yes – spitefulness. 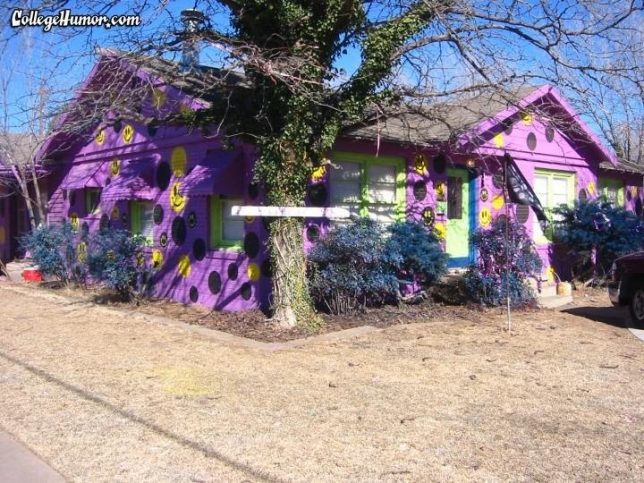 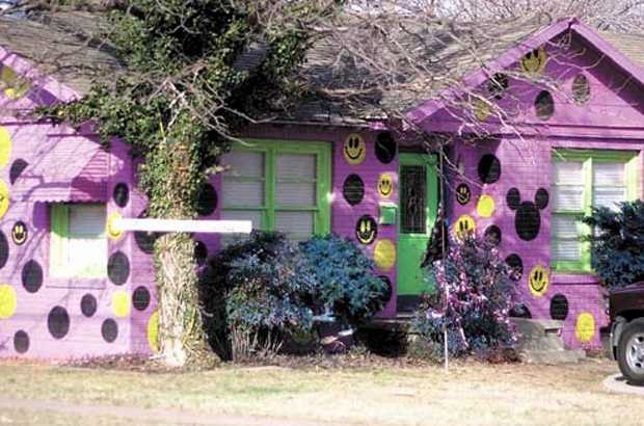 Don’t mess with Texas… or Texans, for that matter, even if the folks doin’ the messin’ be Texan too. You might get something like the so-called Lubbock Purple Rental House. This otherwise unremarkable single-family residence drew the ire of city authorities attempting to enforce an ordinance that allows no more than two unrelated people to live in a single-family residence. In 2001, homeowner Bill Davis and the several college students living at the house decided to protest the city’s “harassment” by painting the house purple with black and yellow polka dots. That’ll show ’em! 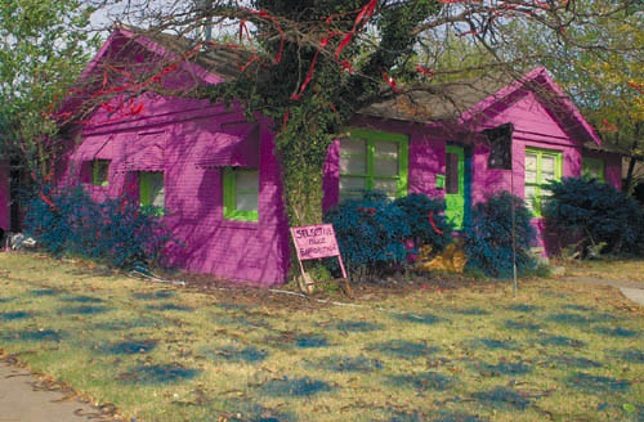 When a new group of students began renting space at Davis’ house in 2003, the city tried to enforce the ordinance again and Davis responded as before, though this time he eschewed the polka dots and instead painted the lawn and bushes. Kinky! The city was not amused. “We had these ordinances before he bought the house,” explained City Councilman Gary Boren, “but he (Davis) likes to be a sissy and paint his house… and say he’s making a statement. It’s a sissy way to deal with something.” Or, some might say, a spiteful way.