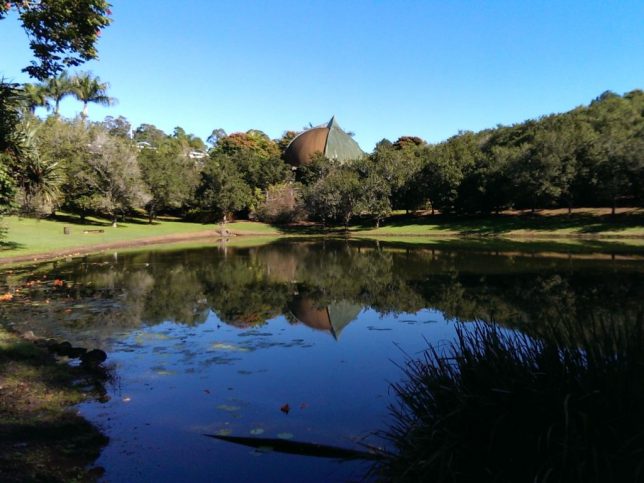 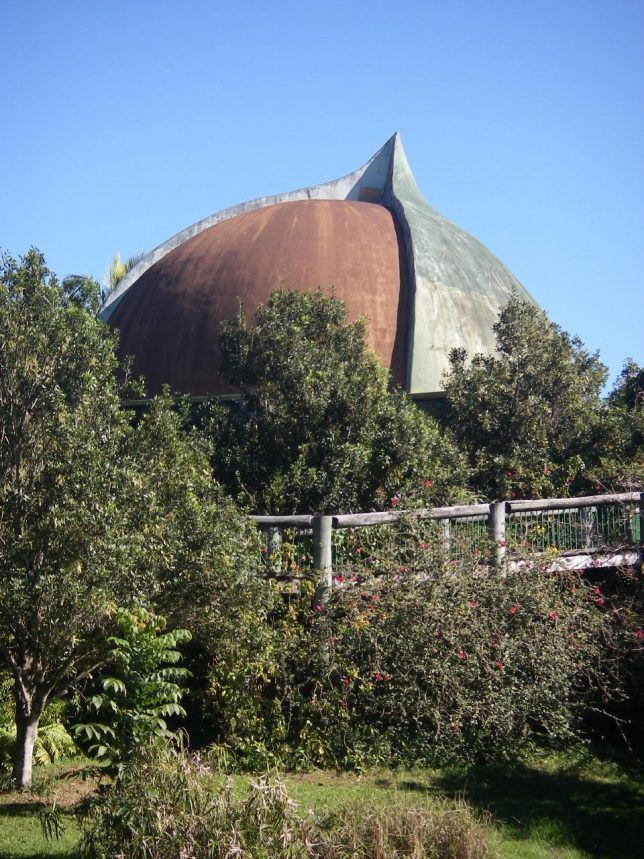 Go nuts y’all! The 52 ft (16 m) tall Big Macadamia Nut was built in 1978 at Nambour in southeastern Queensland. The nut – actually a building with a cavernous interior – was a prime stop on something called “the Nut Country Tour”. Bring an epipen. The above photos were taken by Flickr members Yasuaki Kobayashi (bonjour_de_y5i) and Claire Garner (pinkdotbag) in 2013 and 2008, respectively. 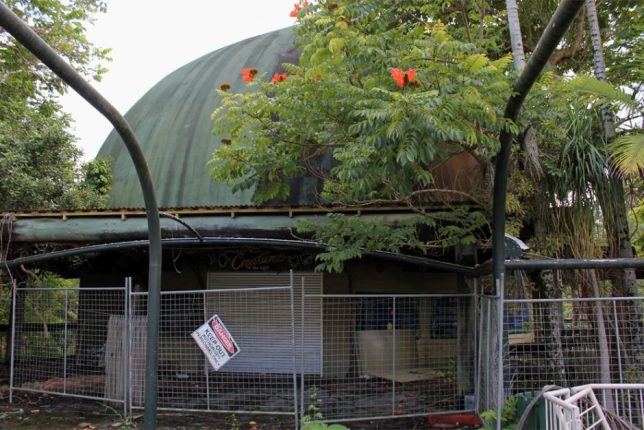 For reasons unknown, the Nut Country Tour didn’t crack the public up and by the year 2000 the Big Macadamia Nut had been converted to house a “Rainforest Creatures of the Night” exhibition. Evidently Queenslanders see more than enough of those in their own backyards. By the winter of 2013 the exhibit had closed and to date remains abandoned.

Change We Can Believe In 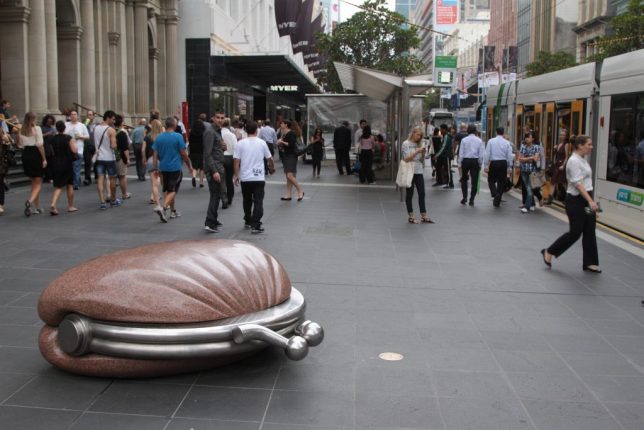 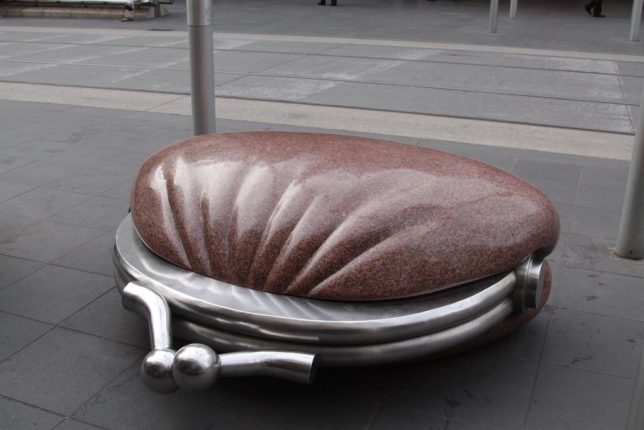 The Public Purse, located in Melbourne’s Bourke Street Mall, was created in 1994 by British-born artist Simon Perry. Functioning as public art AND public seating, the outsized ladies pocketbook was moved to the other end of the mall in 2012 due to construction in the area but has now been returned to its accustomed place just outside Melbourne’s General Post Office. Flickr member Marcus Wong snapped the colossal coin purse in early 2013. 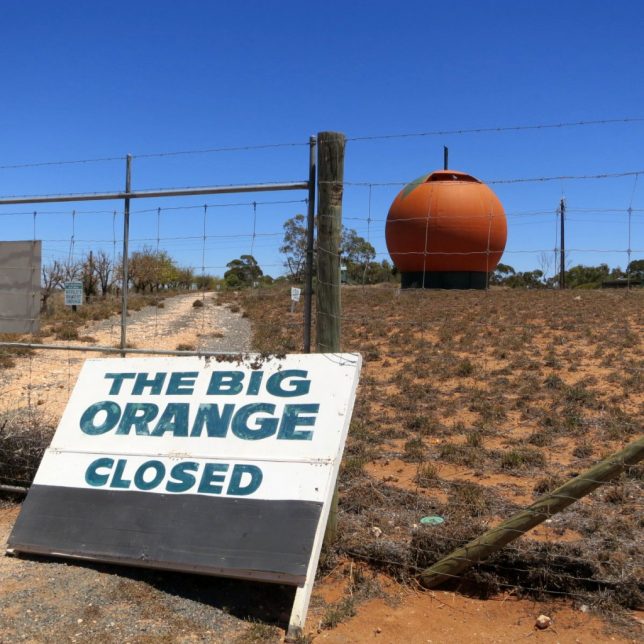 Investors and local authorities had high hopes for the Big Orange in 1980, when it opened in Berri, South Australia. Alas, the 49 ft (15 m) tall, 85-ton, four-story building never lived up to promoter’s hype and ended up being sold in 2000, 2006 and yet again in 2008. Though currently closed, The Big Orange is still in good shape structurally and the current owner states it will re-open someday. As it stands, this particular Australian Big Thing remains the biggest fruit in the country – best not to toss that epithet around at the local drinking hole, however. 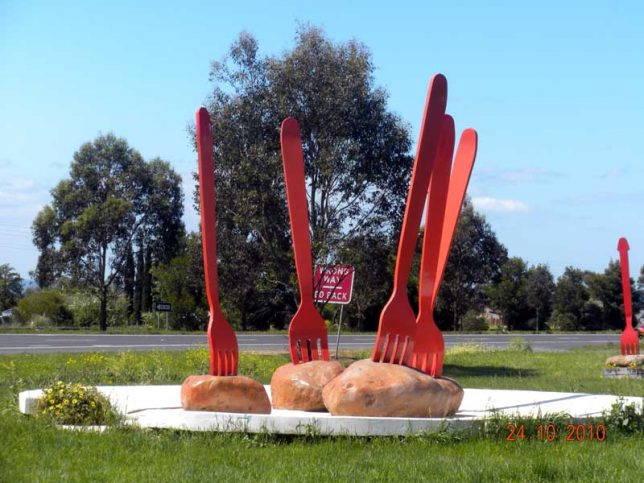 Did you know 2008 was the International Year of the Potato? Trust us, it was… and if you don’t believe it, how else to explain the Giant Potatoes & Forks sculpture (as its officially known) in Gippsland, Victoria? 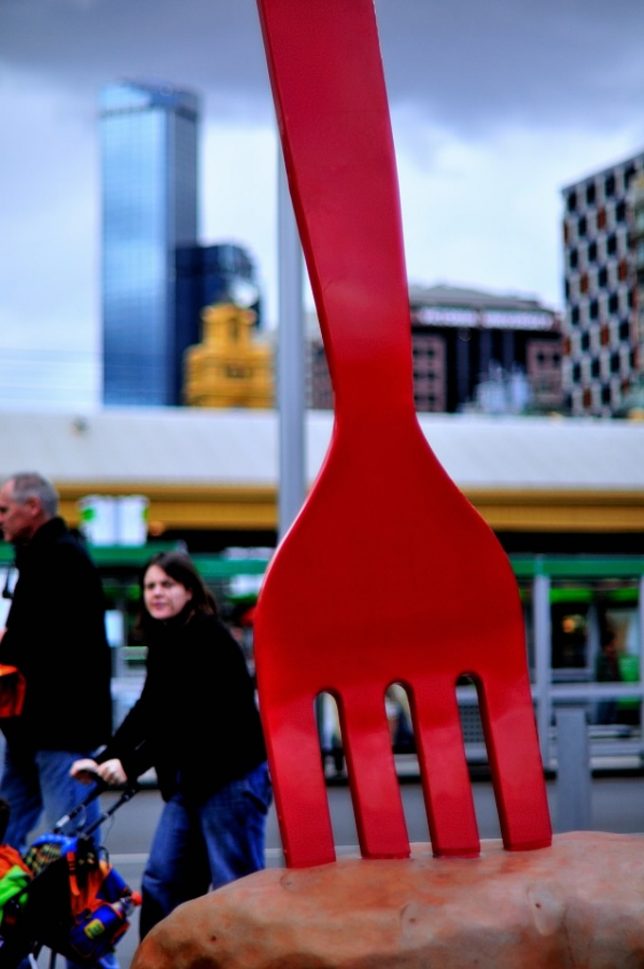 Possibly the only sculpture dedicated to the UN’s celebration of the humble tuber, the stone and steel art installation can be found just outside The Spud Shed, a fruit and vegetable retail outlet specializing in local Thorpdale potatoes situated on the Princes Highway between Yarragon and Trafalgar. Drop by if you’ve got the tine.