What would Stanley Kubrick think? With its nonthreatening, simplistic stick figure face set in a spheroid plastic housing, CIMON the ‘flying brain’ is probably more analogous to GERTY, the emoji face AI assistant in the movie ‘Moon,’ than Kubrick’s famous antagonist HAL 9000 from ‘2001: A Space Odyssey.’ But the fact that astronauts will have this smiley-faced companion floating around them in space this summer inevitably brings a lot of pop culture references to mind.

Lest you start feeling like the future has really arrived, you might want to a good look at CIMON, the ‘mobile and autonomous assistance system’ powered by IBM’s Watson Supercomputer. Developed by Airbus and Germany’s DLR space agency, the bot is set to launch to the ISS between June and October 2018 in a test by geophysicist Dr. Alexander Gerst during the European Space Agency’s Horizons Mission. Is it just us, or does this thing look like it was designed in the 1980s? 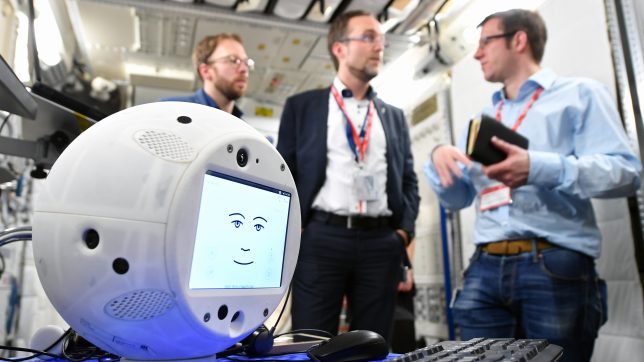 Nevertheless, it’s a notable first in bringing artificial intelligence to space. It’s manufactured using 3D printing and weighs about 11 pounds. CIMON (Crew Interactive MObile companioN) is capable of voice and facial recognition and aims to keep astronauts company, providing social and informational benefits while also serving as an early warning system for technical problems. It can display procedures for routine tasks on its 8-inchscreen and move up to one meter per second.

“From summer 2018, CIMON will become the new ‘crew member’ on the International Space Station (ISS), in order to demonstrate cooperation between humans and intelligent machines in the form of a technology experiment,” says DLR, the German Aerospace Center. 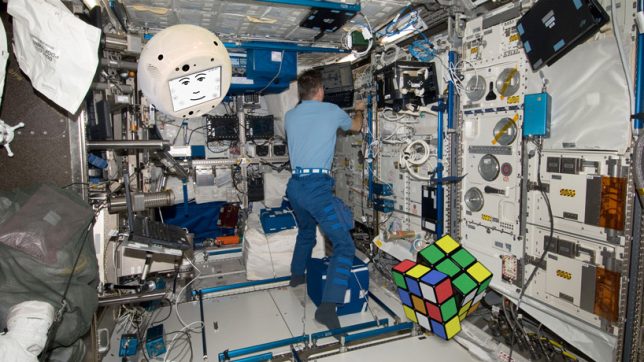 “CIMON will enter microgravity on 9 March 2018 during the 31st DLR parabolic flight campaign in Bordeaux. In particular, orientation, navigation and steering will be tested, to ensure that it is optimally prepared for use on the ISS – in permanent microgravity. In June, CIMON will then travel to the ISS on board the US Space-X CRS-15 space transport mission, where it will be greeted by the German ESA astronaut Alexander Gerst.”

“Following a functional test, the German astronaut will perform three experiments with his artificial colleague. On the agenda are experiments with crystals and a Rubik’s cube, and a medical experiment in which CIMON will be used as a flying camera.”

“CIMON allows the astronaut to keep both hands free, with no need to manually operate a computer, for example. Thanks to this fully voice-controlled access to documents and media, the astronaut can conveniently navigate through operating and repair instructions and procedures for experiments and equipment. CIMON will thus serve as a complex database of all the necessary information for working on the ISS, and can also be used as a mobile camera for documentation purposes.”

“In the medium-term, we want to concentrate on group effects that develop in small teams over a long period of time and can occur during long-term missions to the Moon and Mars. Social interaction between humans and machines, and between astronauts and emotionally intelligent flight attendants could play an important role in the success of these missions,” explains Till Eisenberg, CIMON project lead at Airbus Friedrichshafen.