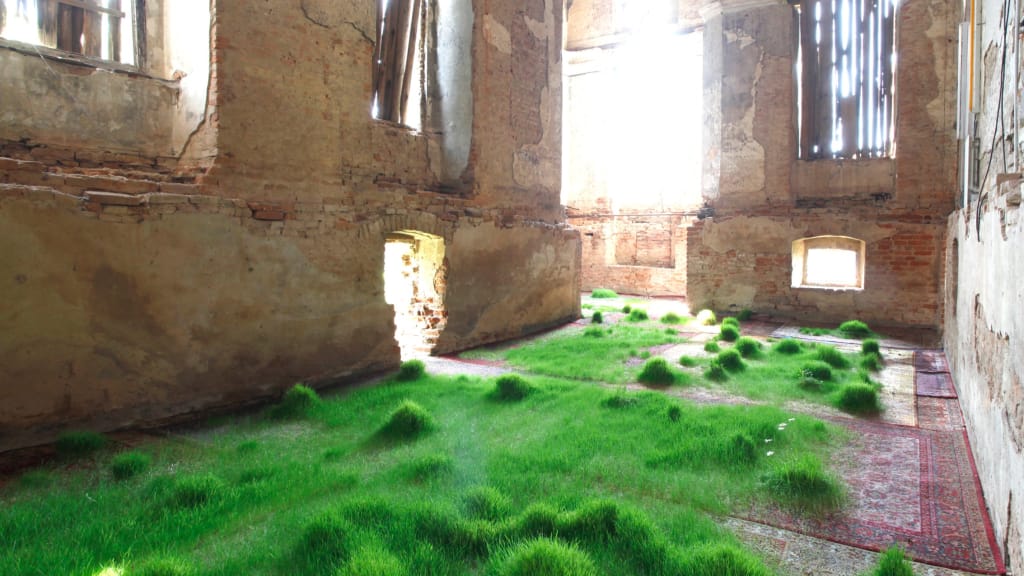 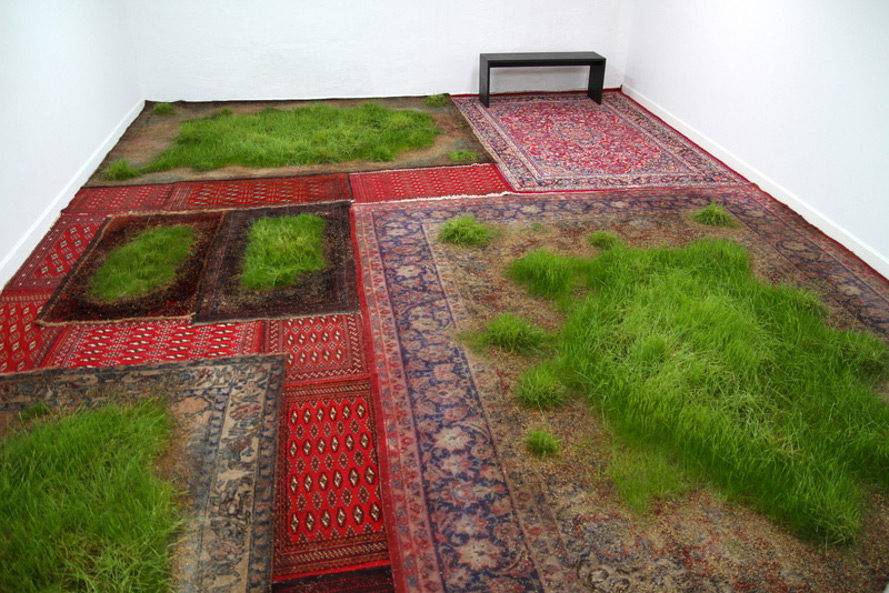 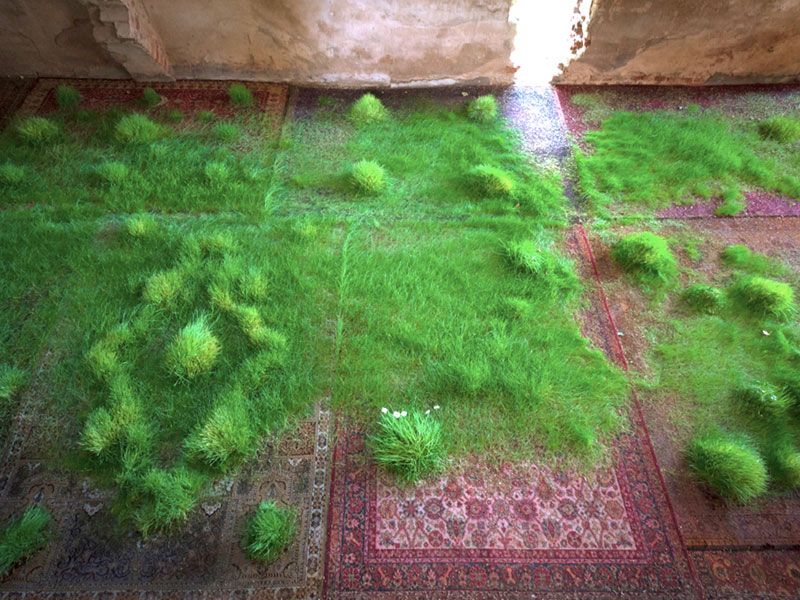 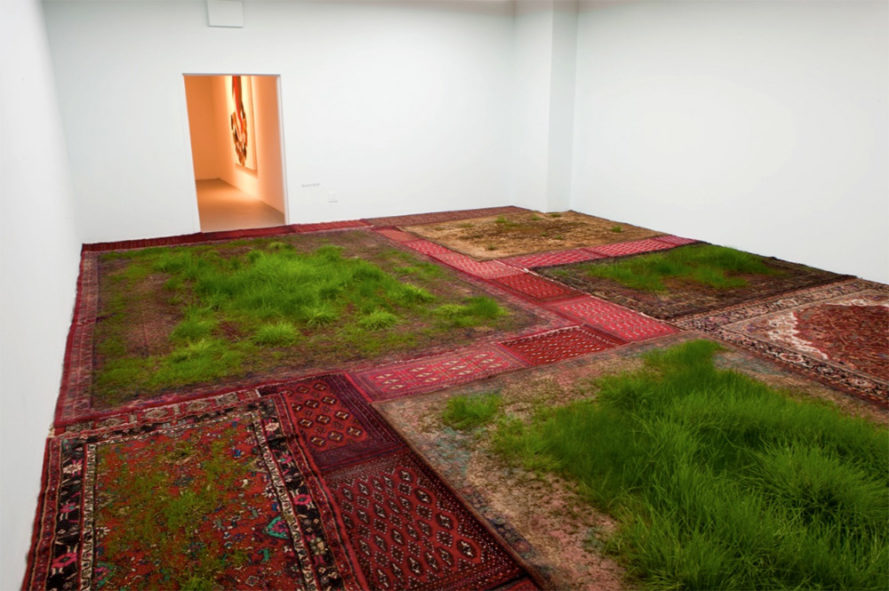 Grass sprouts right up from the fibers of faithfully watered Persian rugs in this installation by New York-based artist Martin Roth, first exhibited at an Austrian castle in 2012 and later inside London’s Korean Cultural Center as part of a show entitled ‘Riptide.’ Over the course of the show, the grass sprung up from seed, grew in clumps, took over the entire space and ultimately died once the fibers of the rug failed to provide enough nutrients for it and the grass roots destroyed the fibers. 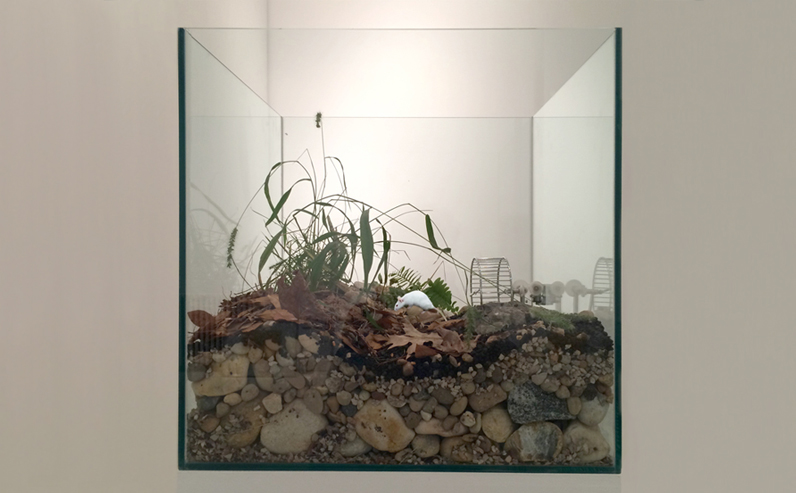 Roth’s works also display a thread of nature themes running throughout, and each one has a descriptive title: “I filmed a bird driving,” “I created a natural soundscape for my bonsai,” “I grew corn for a plant concert,” “I rescued laboratory mice so they could play swan lake.” The latter piece is pictured above.

“After long negotiations and numerous bureaucratic obstacles, the artist was able to obtain laboratory mice. Freed from their involvement in science, they were relocated to a gallery where they were housed inside a glass terrarium with a running wheel connected to a music box. This running wheel played Tchaikovsky’s Swan Lake when the mice chose to use it. Based on a folktale in which a princess is turned into a swan, the ballet represents the metamorphosis undergone by the mice, who have transformed from powerless subjects of experimentation to artists in their own right. The mice exercise a certain authority over this venerated piece of music, determining when and for how long it will be played, as well as developing their own relationship to its sonic properties.” 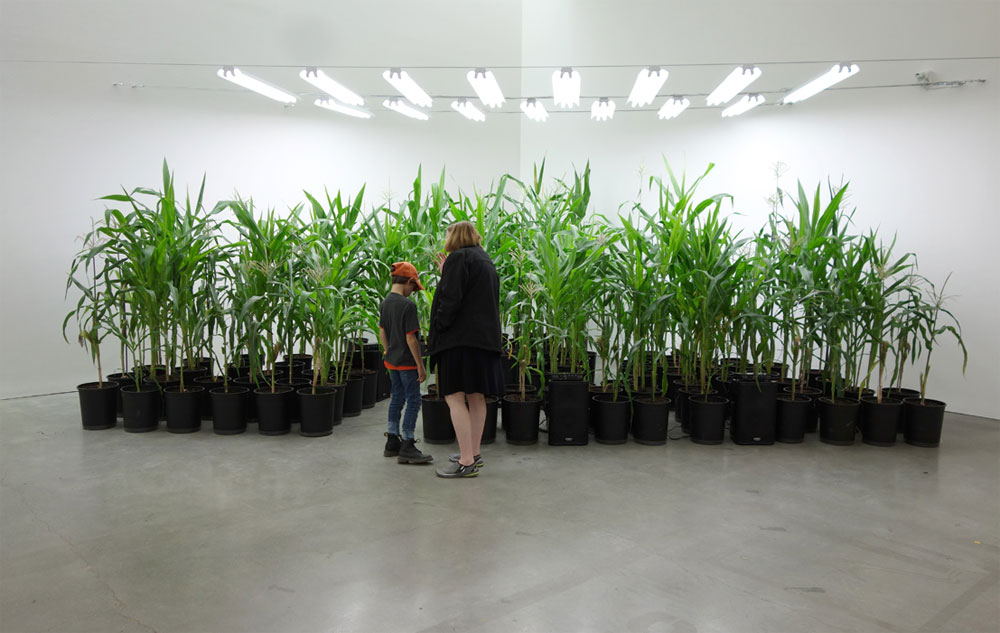 For the corn plant piece at the Hessel Museum of Art, Roth wired five groupings of corn plants to five musical devices to form a biofeedback system. “Control signals were generated by measuring the electrical resistance of the plants’ vegetable tissue, which in turn activated the MIDI synthesizers. Viewers were encouraged to interact with and touch the plants, which affected the sounds being played. The audience and cornfield were not just participants but actors, acting together – in concert – to produce the work.” 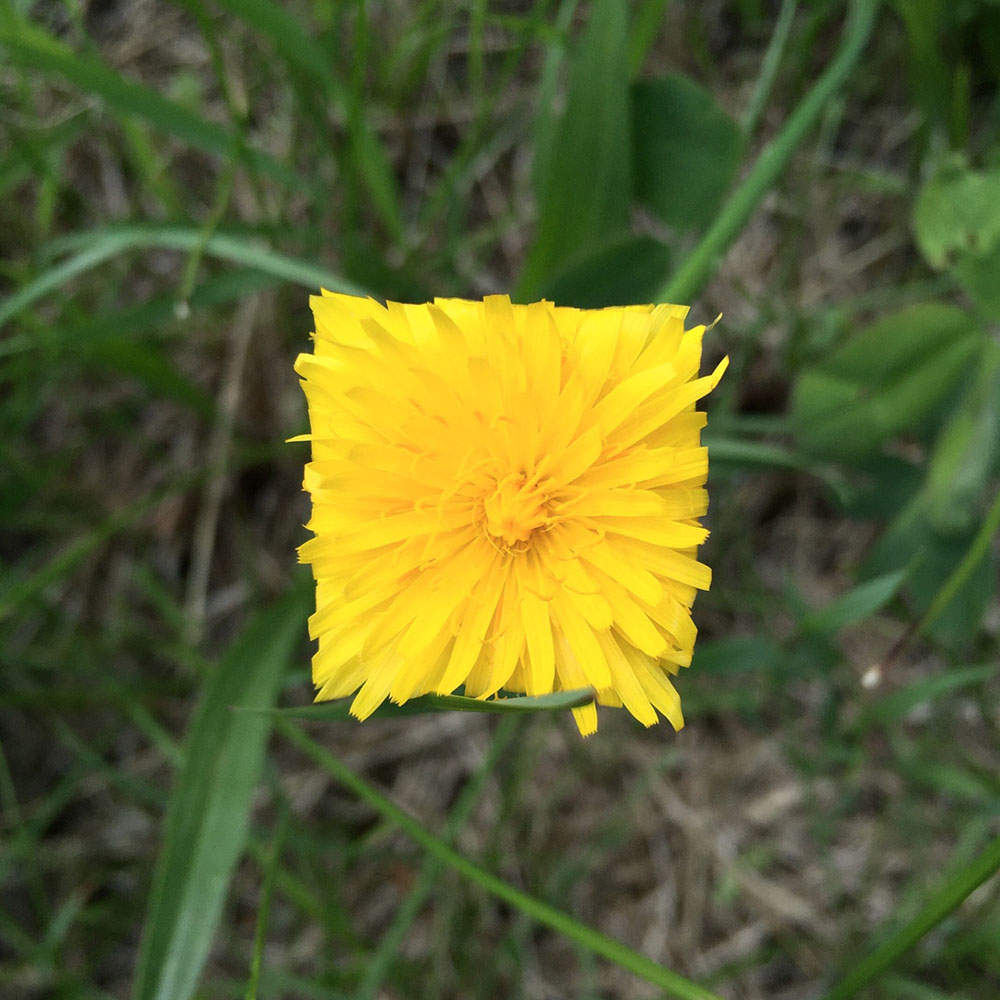 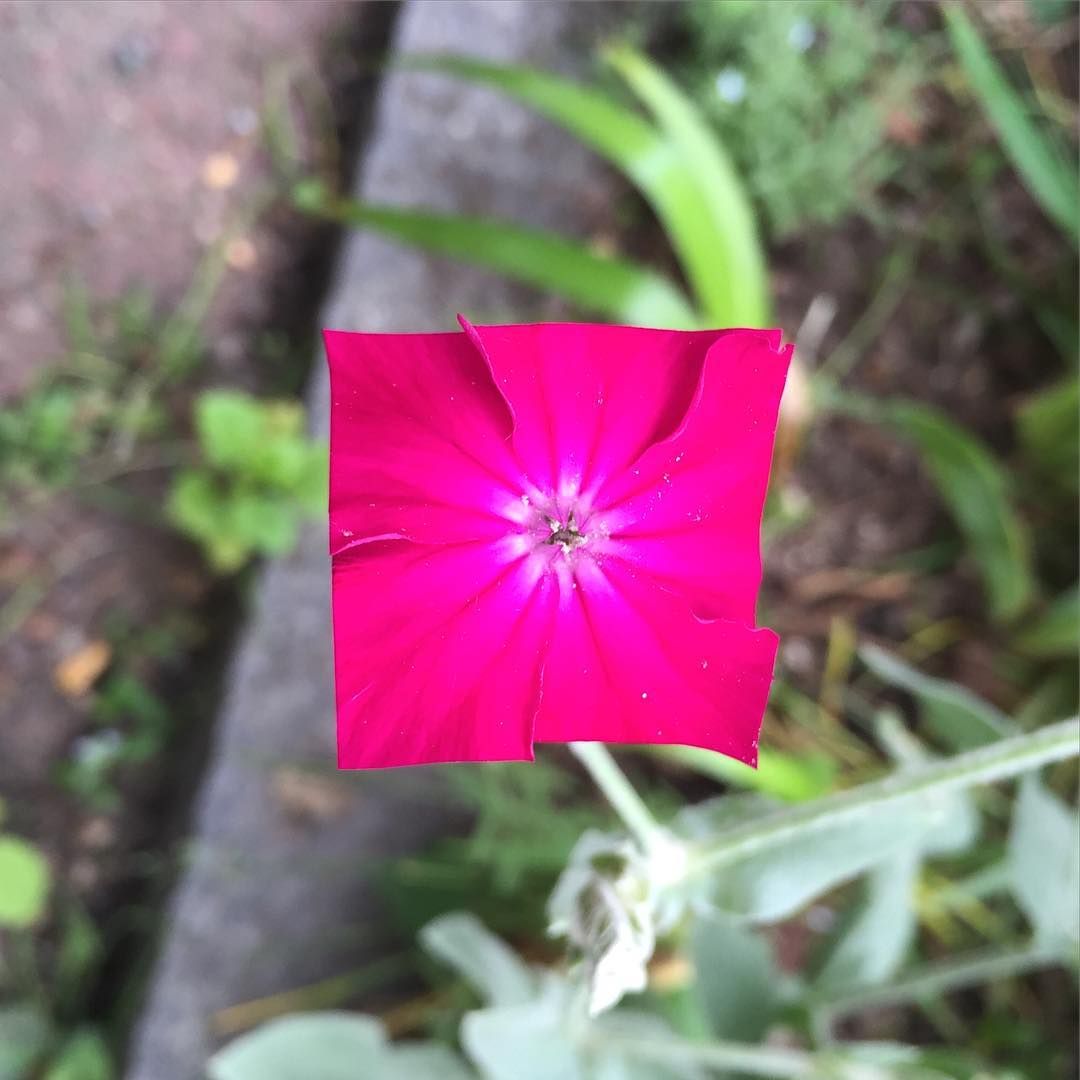 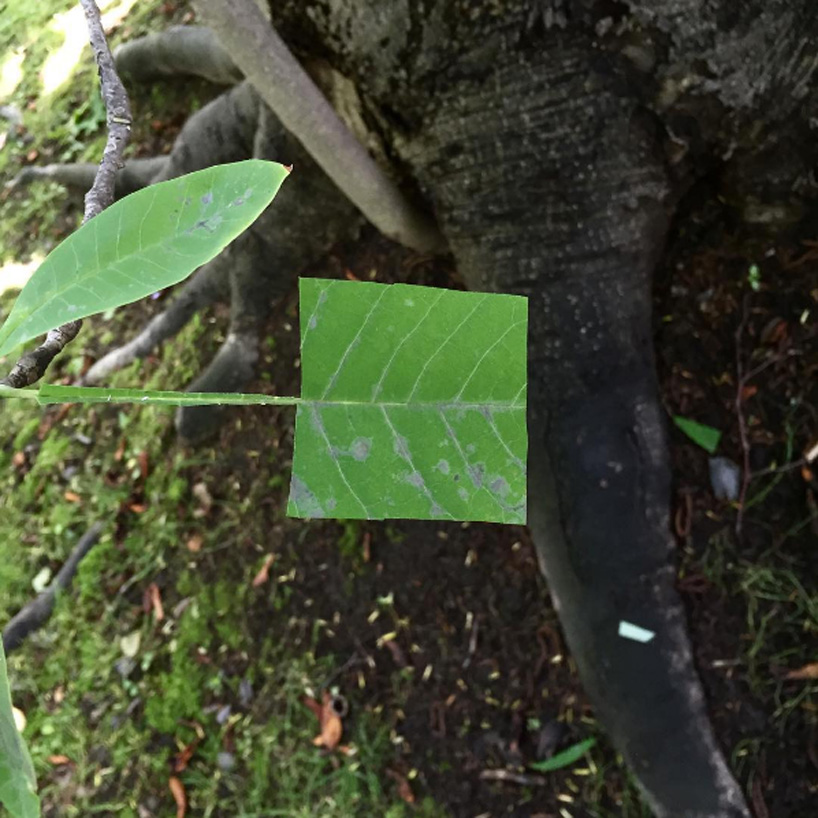 Effectively giving living plants a haircut, artist Baku Maeda produces forms not typically seen in nature with two simple series entitled ‘Bit Flowers’ and ‘Bit Leaves.’ His medium of choice is any tempting plant growing right out of the ground that he can quickly modify and photograph, contrasting the resulting geometric shapes with the organic forms of nature seen in their immediate environment. You can see the whole series on Baku’s tumblr. 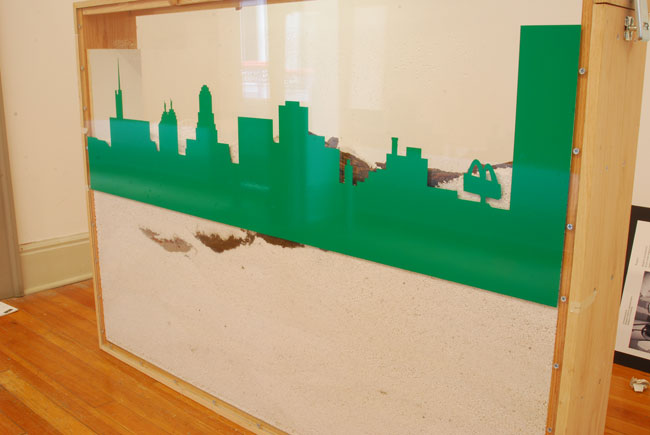 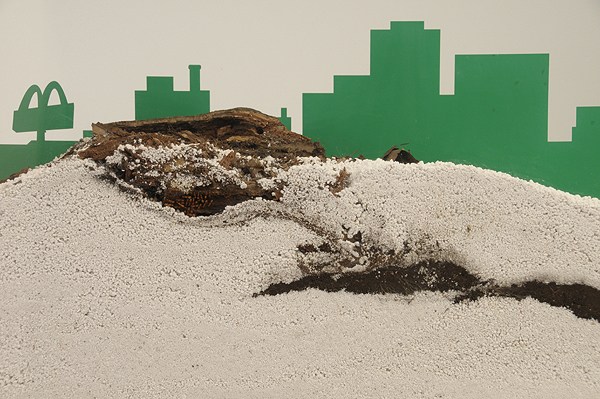 Commissioned by the Center for Exploritory and Perceptural Arts (CEPA), this project by artist Elizabeth Demaray makes use of ants sourced from a commercial ant farm set against a depiction of the skyline of Buffalo, New York. Entitled ‘Corpor Esurit, or we all deserve a break today,’ the work offers the ants fast food from McDonald’s for a duration of one month with the intent of considering the impact of industrial food sources on species other than ourselves. The ants chosen for the project have a natural life span of between two to three weeks. You might be surprised to learn that those housed within this ant farm and fed Big Macs and fries managed to live for 23 days, exceeding their life expectancy by almost a week.