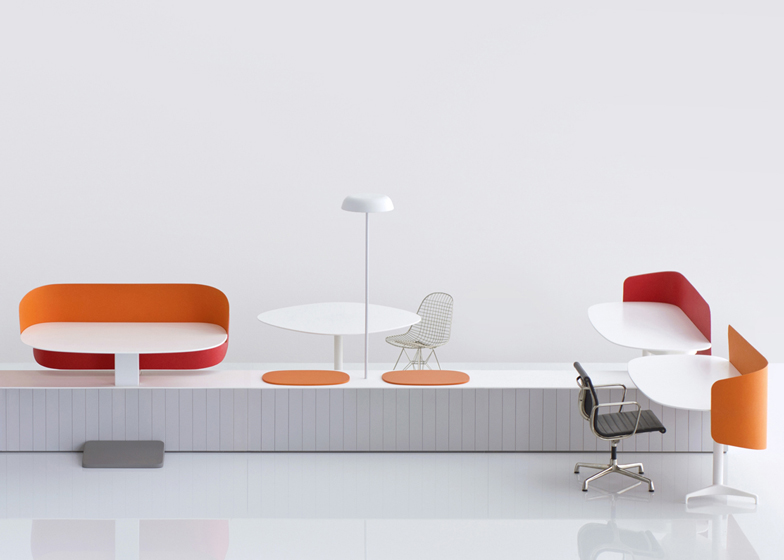 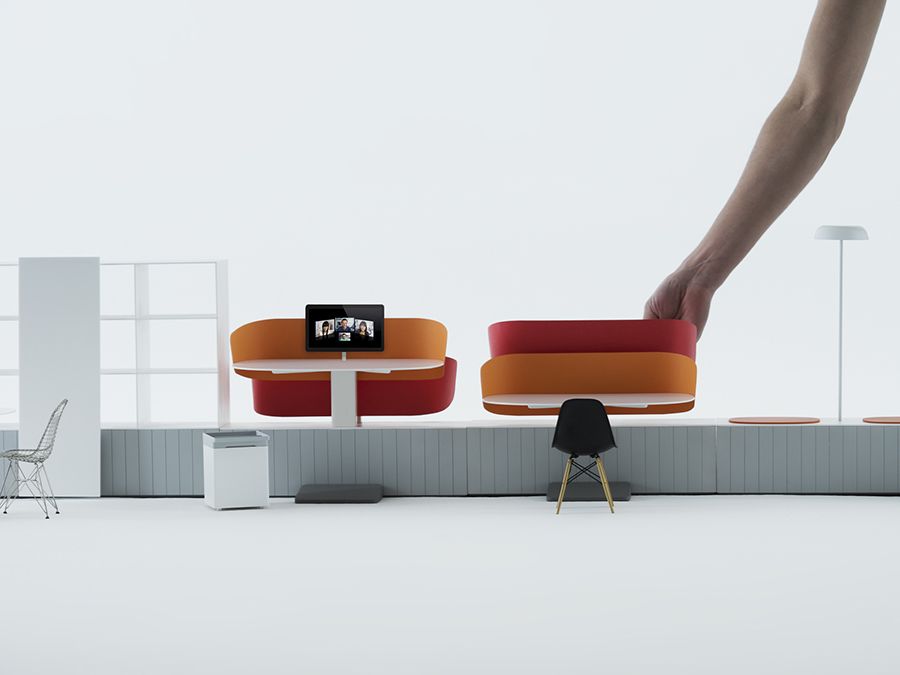 A sleek central island contains desks at various heights, standing platforms and benches for open-plan office environments. Designed by Industrial Facility for Herman Miller, ‘Locale’ includes adjustable surfaces so users can work while either sitting or standing, and choose between more private or more social work stations depending on their preferences and current tasks.

“‘Locale’ makes working together more productive and pleasurable by intelligently organizing the office into social clusters that allow for free movement, variety and and adjustability,” says Don Goeman of Herman Miller. “‘Locale’ took over two years to develop with more than 40 engineers. During this time, the conditions of work in terms of atmosphere and attitude have shifted, so it was important that we leapfrog any old conceptions of the modern office and design a new place based on our understanding of the current social and cultural changes.”

“Many offices try to evoke a kind of forced playfulness – slides, chill-out zones, ping-pong, even a faux home-like interior. To us, these are stylistic changes, while ‘Locale’ is designed to accommodate a paradigm shift. We find a lot of value in our own office, which is small, highly efficient, and considerate.” 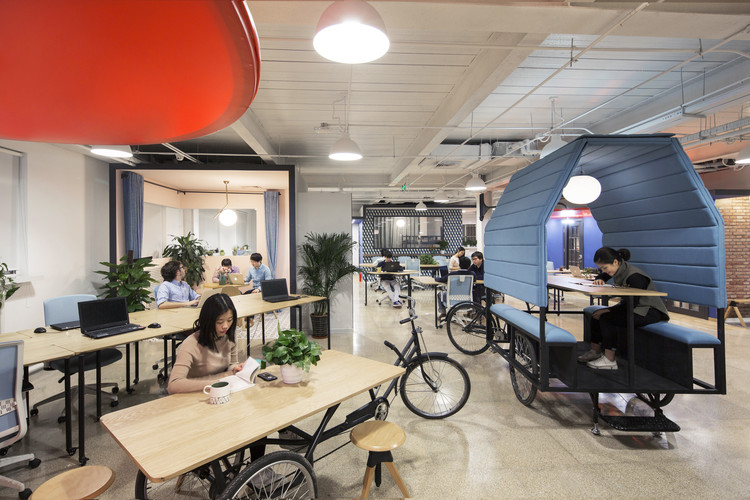 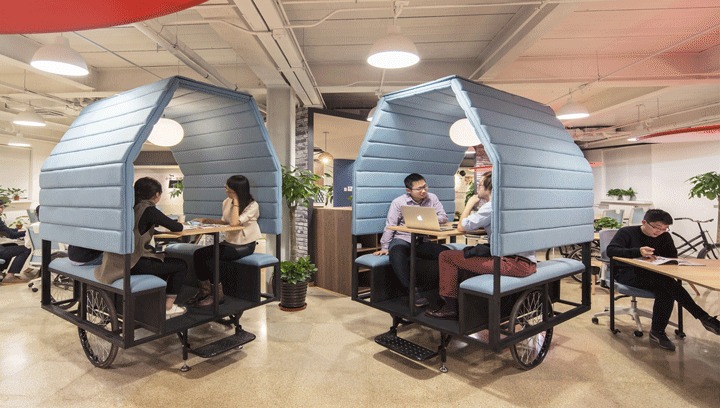 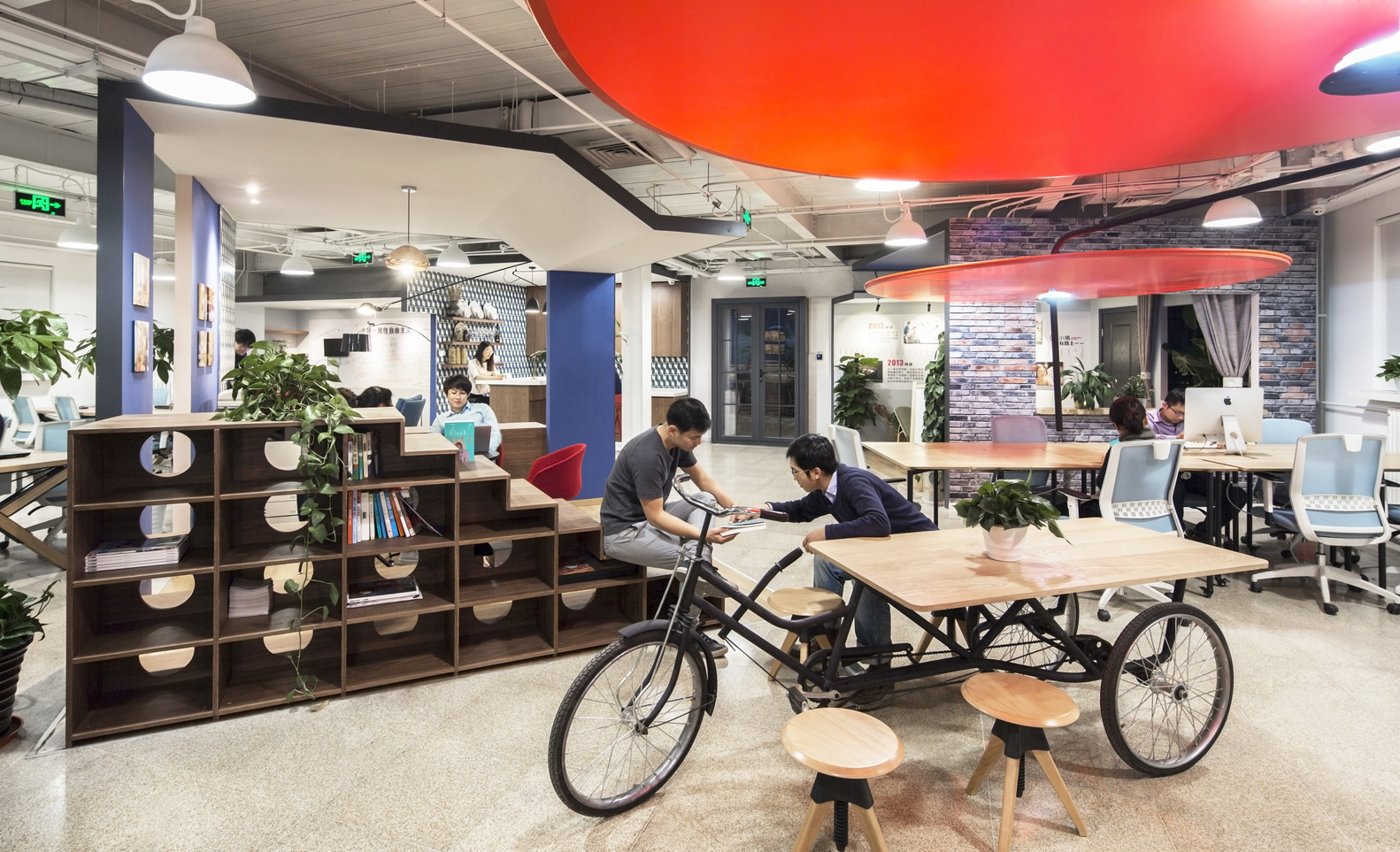 Mobile meeting rooms pulled by bicycles can be joined together or pulled apart in this work environment designed for Chinese tech company Xiaozhu by People’s Architecture Office. ‘Sliced House’ refers to the way the overall office space is divided, with small home-like zones like kitchens and living room scattered throughout, but it applies to these padded mobile work stations too, which almost look like covered wagons. 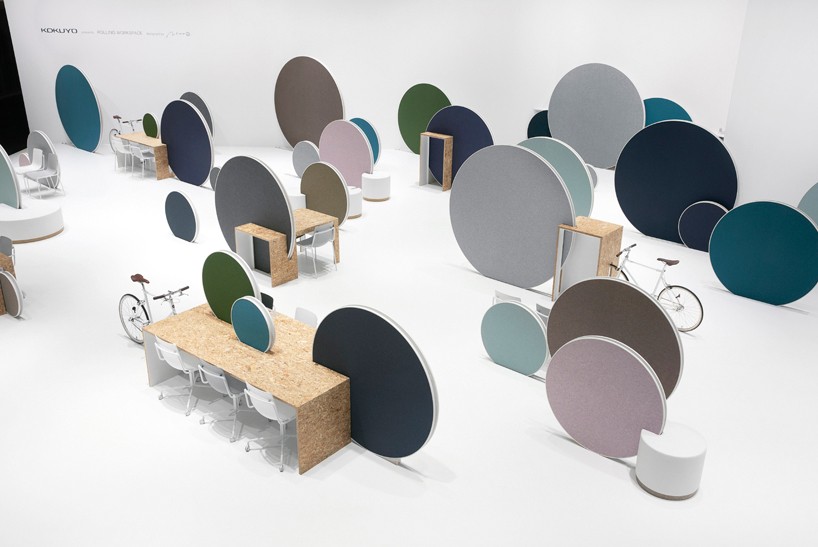 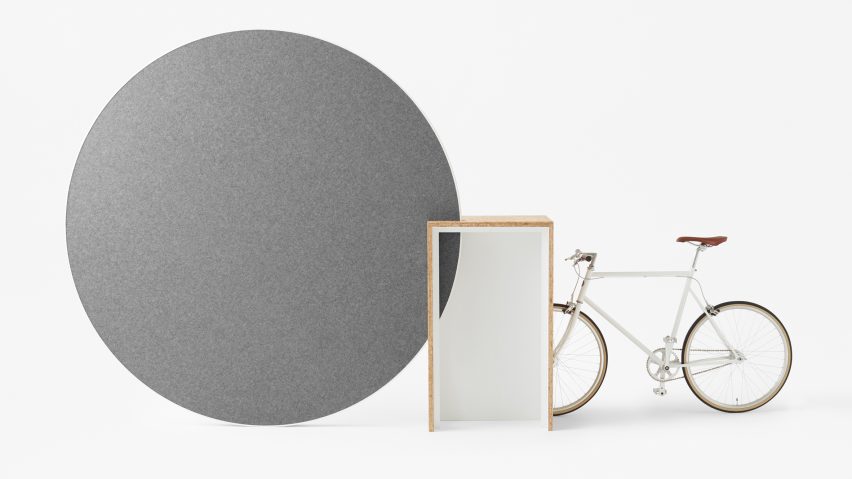 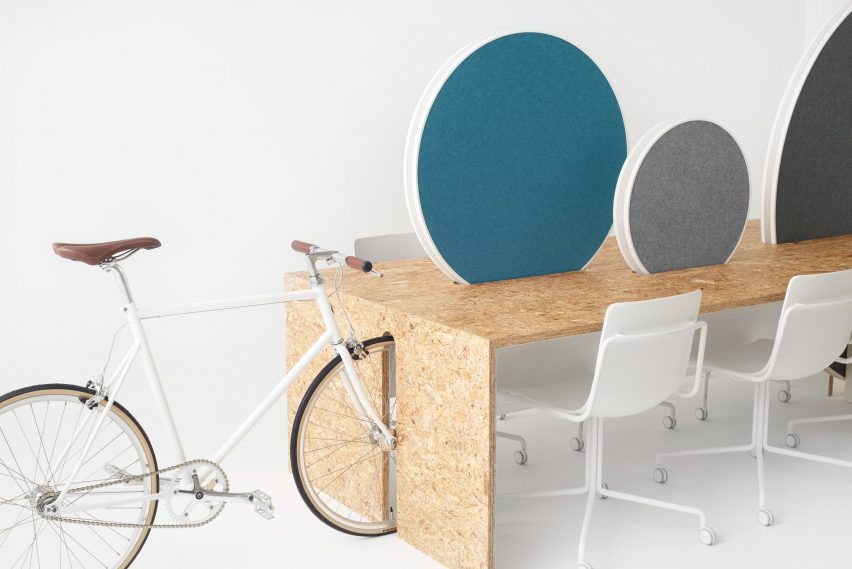 Giant circles become whiteboards and sound-absorbing room dividers in the ‘Rolling Workspaces’ series by Japanese design firm Nendo. Slits are cut into a matching set of desks, counters and benches so the circular shapes can be inserted at various angles – or, so users can stand up their bicycles inside and use them as seats. 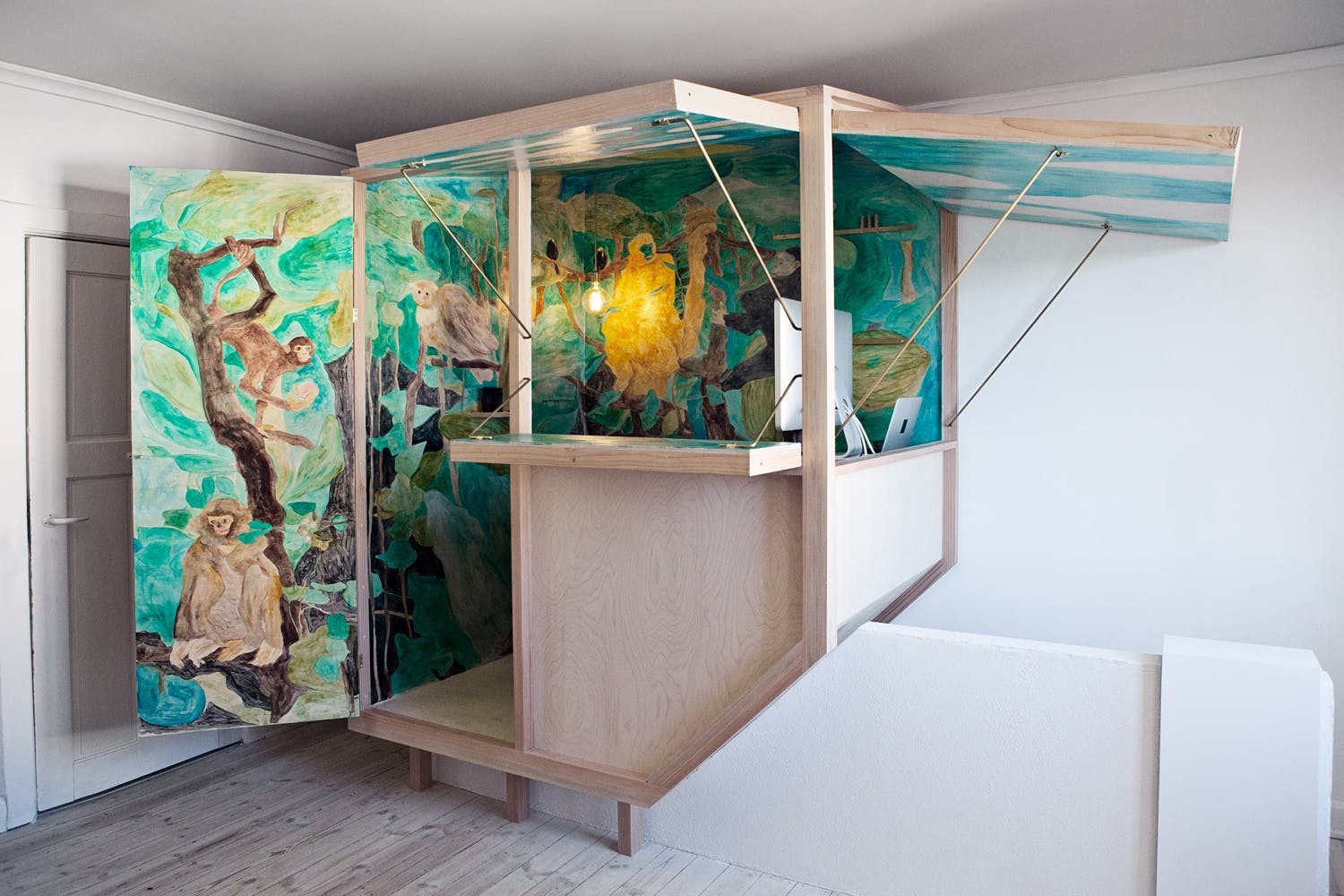 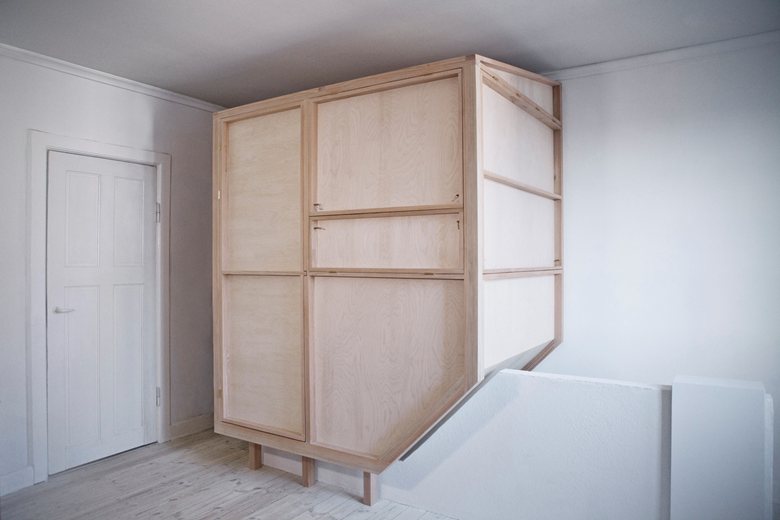 Though designed for a home office rather than a workplace, ‘La Cabane’ by Julien Franc Wahlgreen is a great example of how mini structures that can be opened or closed to the larger space at will create compromise between privacy and collaboration. It functions as a room within a room, straddling the top of a staircase to use up space that’s otherwise wasted. The interior layout and operable panels take inspiration from the Citroën type H cargo van, a classic in Europe.