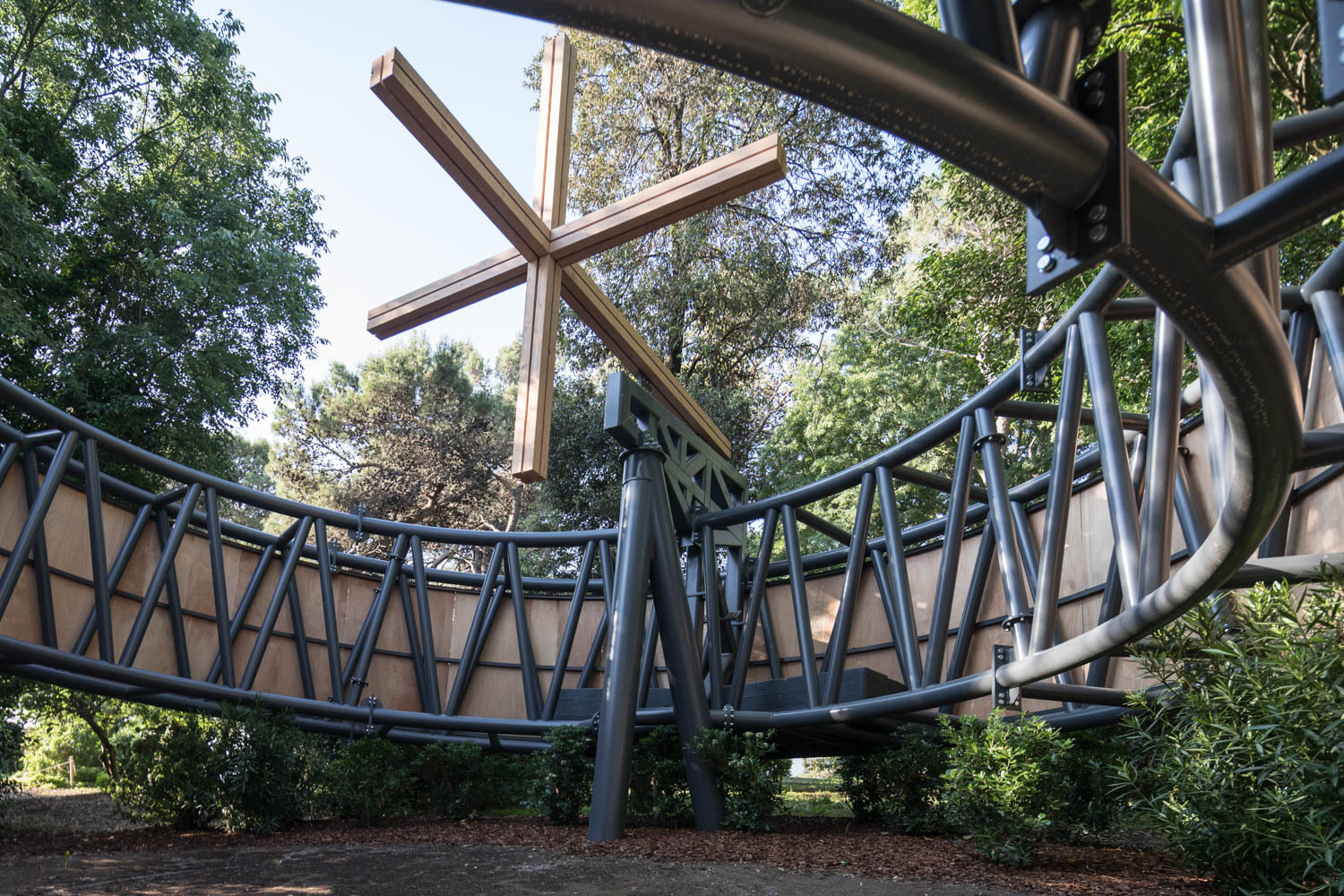 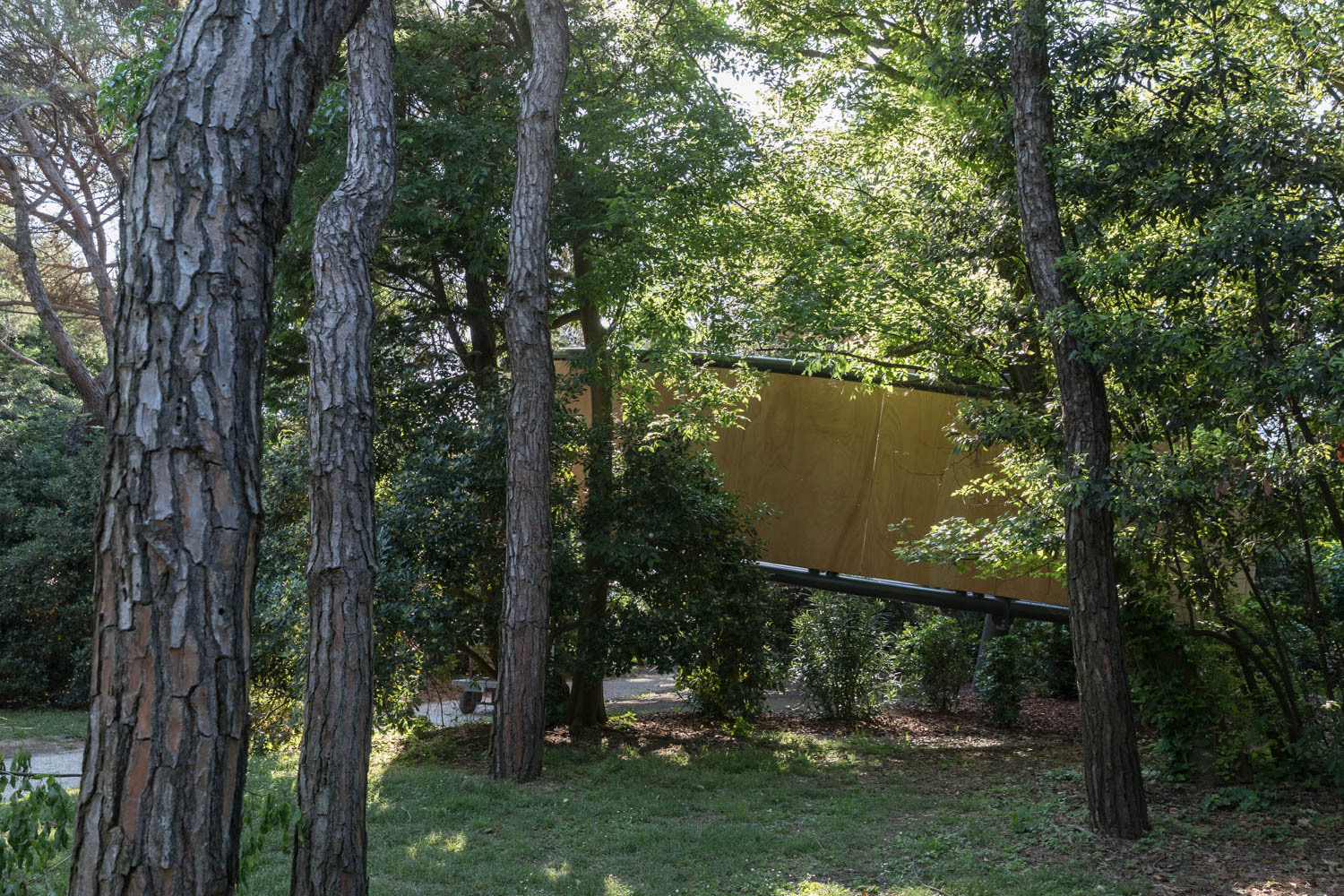 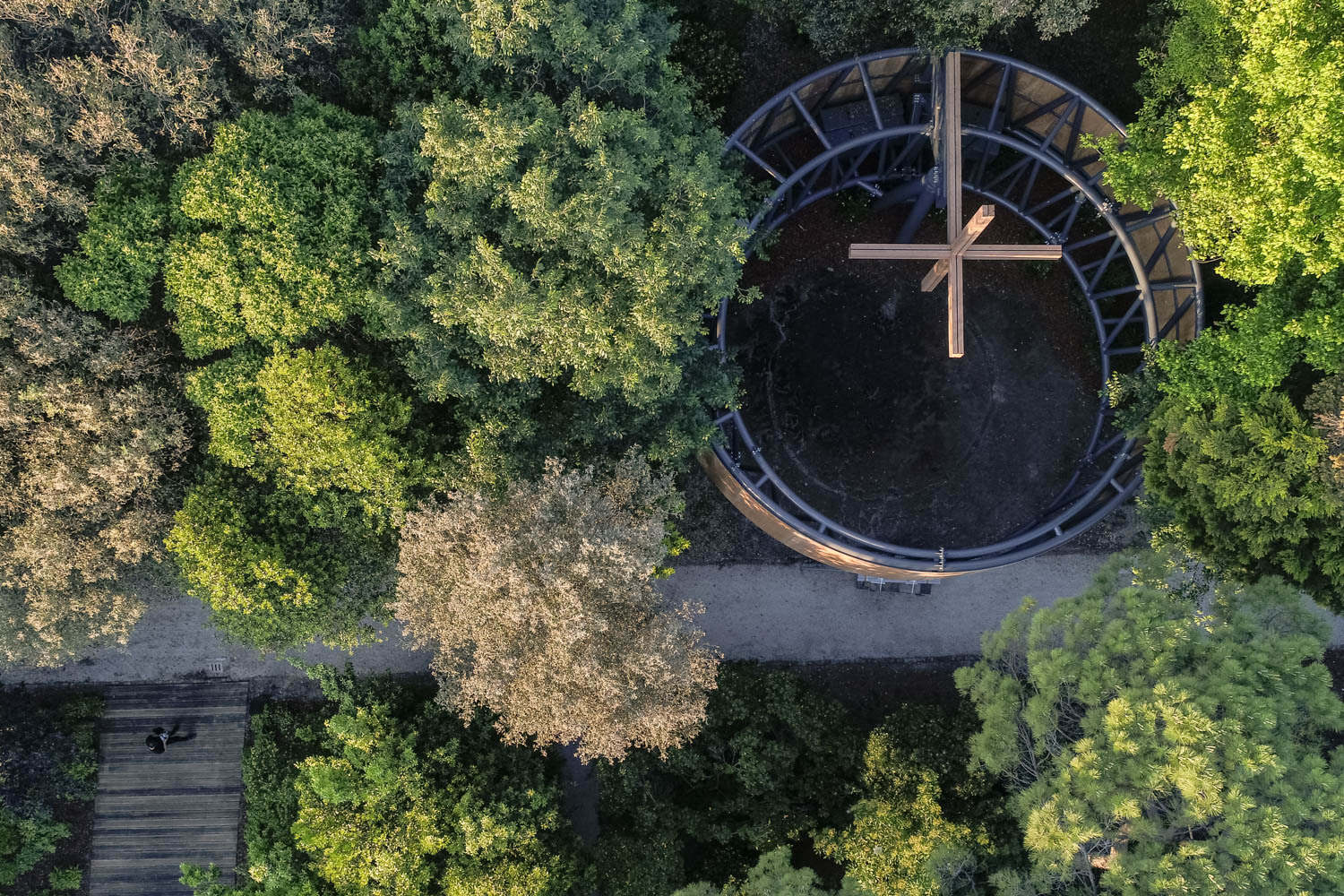 A massive ring of steel tilts on an oversized tripod for Paraguayan architect Javier Corvalán’s chapel. It sits slightly above the ground, supported by a metal arm counter-weighted by 20 tons of stone and a series of cables. The tripod is inspired by the Venetian ‘bricola,’ structures made of two or three wooden poles often spotted in the water of the canals and lagoon to signal the limits of a navigable channel. 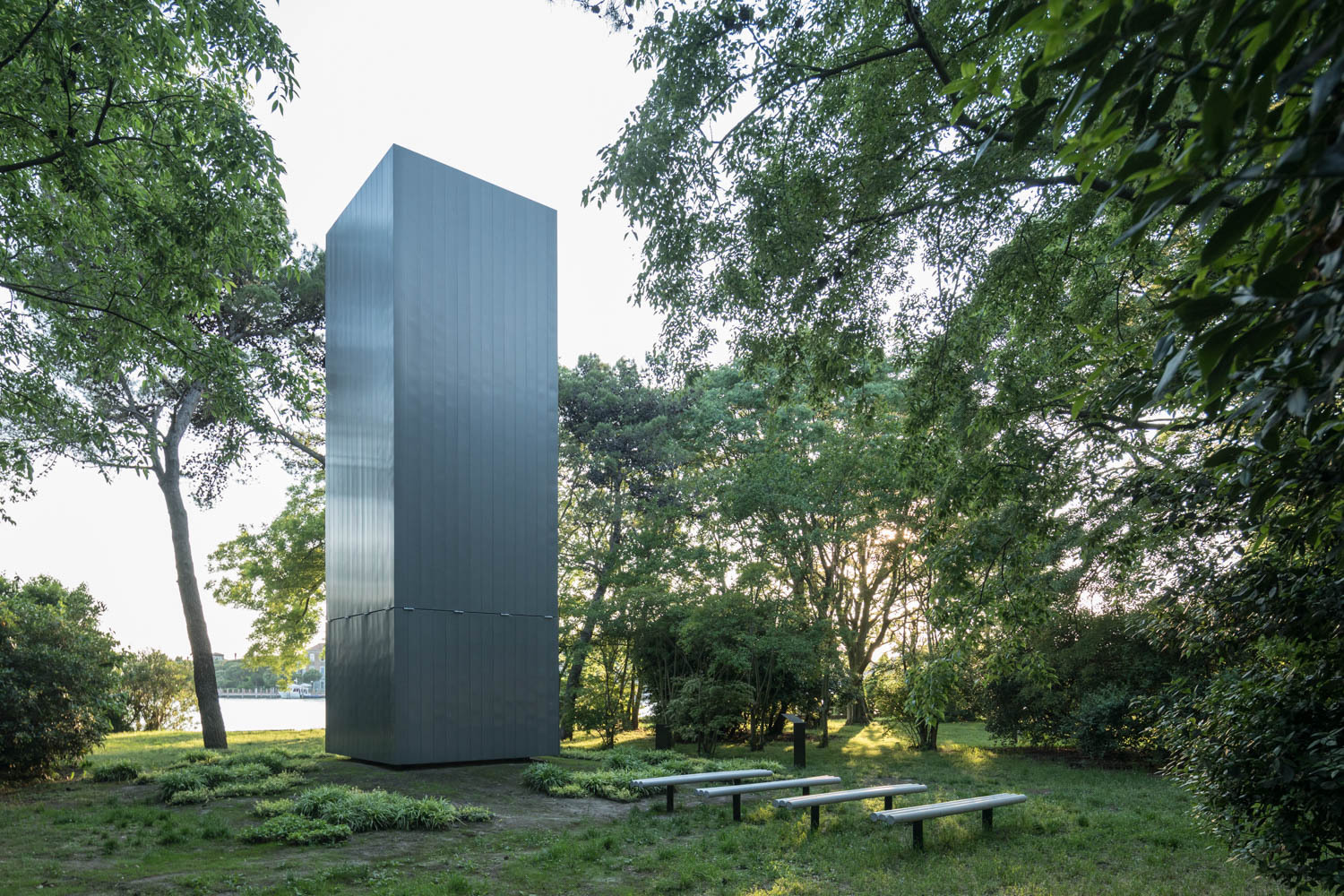 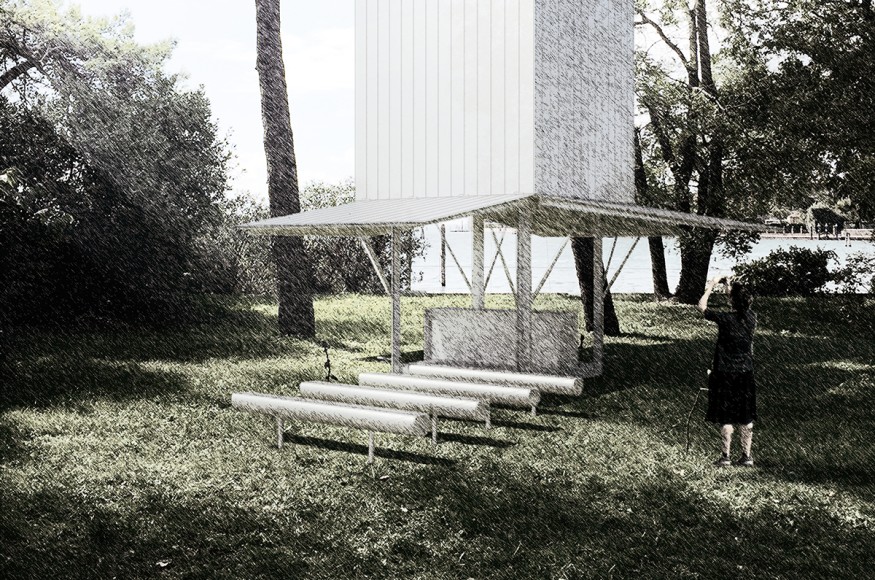 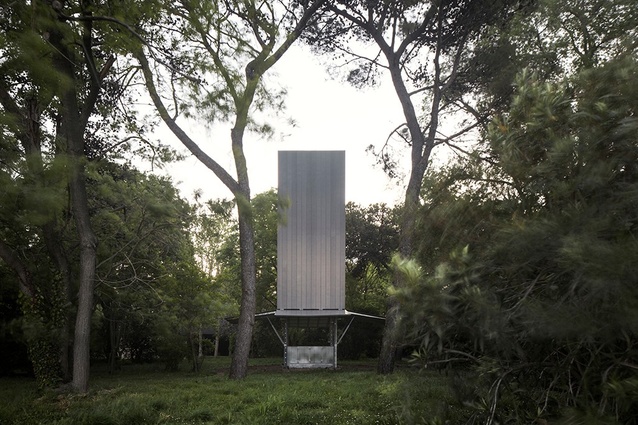 Sean Godsell of Australia created a portable steel-framed structure that stretches up into the treetops; its rectilinear form is based on the dimensions of a shipping container, and it features openings on each side that tilt up like awnings. The pews are made from recycled Venetian mooring poles.

“I was educated by Jesuits whose apostolic ministry was an integral part of my childhood,” says Godsell. “Jesuit missionaries brought not only the word of God, but also education, research and culture wherever they ventured and their existence instilled in me a sense of the church as a resilient, dynamic entity capable of surviving thousands of kilometers away from Rome. My design extends that idea to make a relocatable chapel that can be transported, erected, re-packed and transported and re-erected wherever the need exists.” 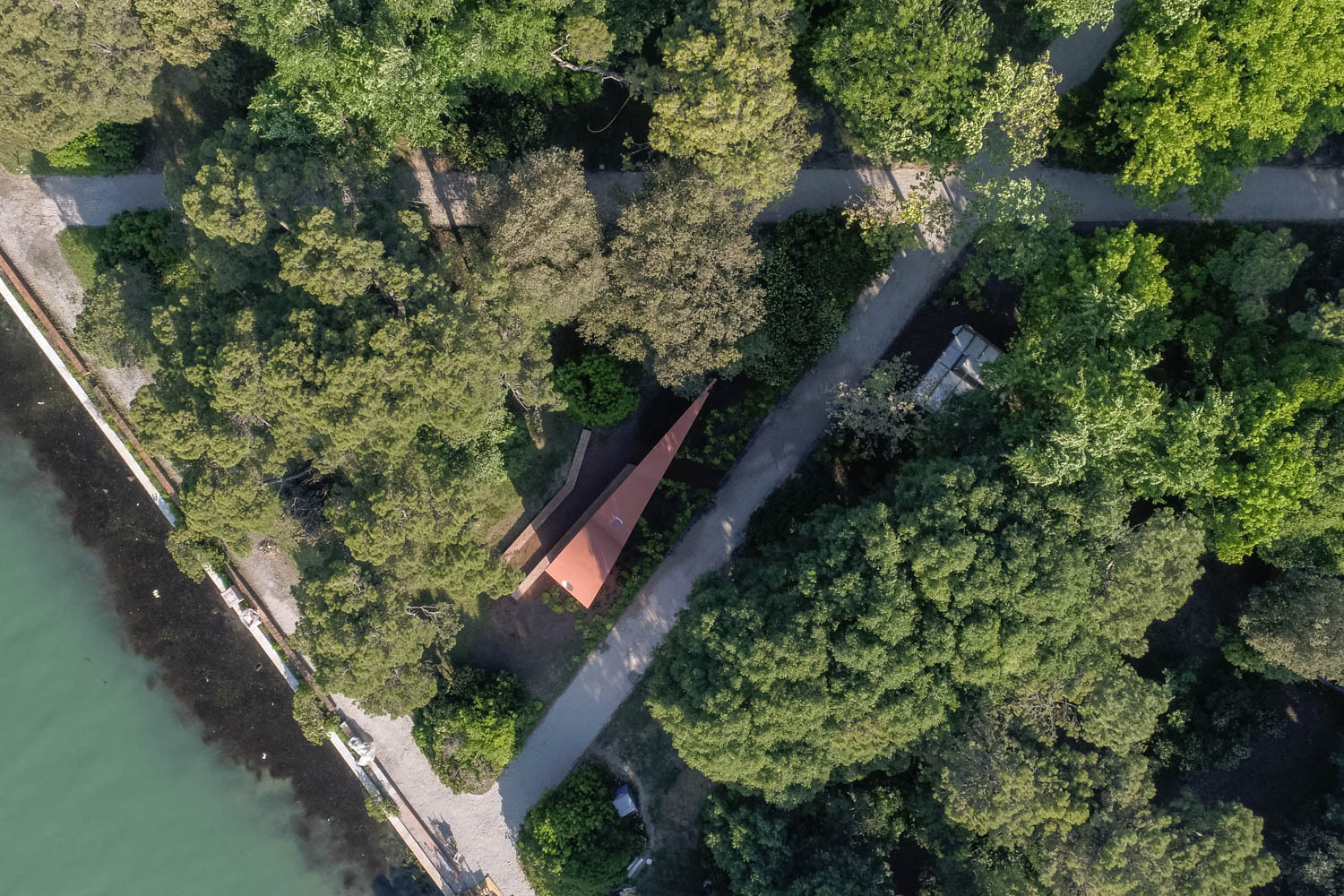 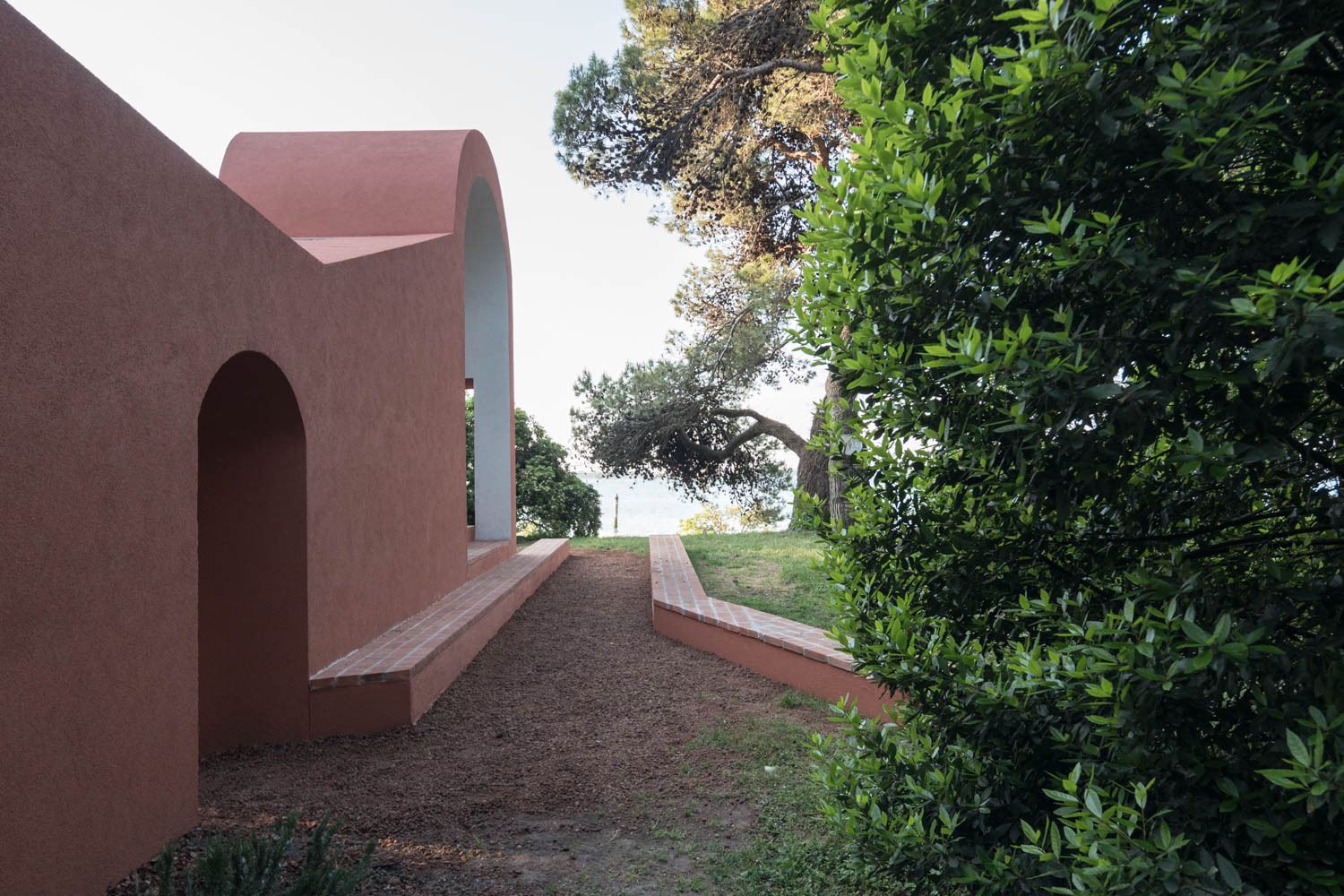 Barcelona-based duo Eva Prats and Ricardo Flores present their vision of a chapel, organic and vivid against the muted green tones of the vegetation. Conceived as a wall that runs parallel to the path that flows through the island, the chapel offers an alternative – to stray from the path step into the mysterious woods beyond. Bold and graphic, Francesco Cellini’s chapel features two interlocking volumes with areas of seating peering in at the pulpit and altar from either side.

“This is not a project for a chapel: it is a reflection on this theme developed by a respectful architect who is not a believer,” says Cellini. “An architect guided by the intuition that any chapel is already inherently the physical embodiment of an idea, or a symbol, rather than a building truly intended as a space of ritual… the objective was not to define a space that invites generic meditation, directed who knows where. Instead, it invites a precise consideration, almost exclusively architectural and necessarily abstract, of the meaning of sacred spaces, of their proportions, relations and functions: what is the relationship between the hall and the presbytery? What is the role of natural light? Etcetera. To achieve this, I considered it necessary to abstain from an exuberance of form, and to work with elementary and pared down spaces and materials that are also practically abstract.” 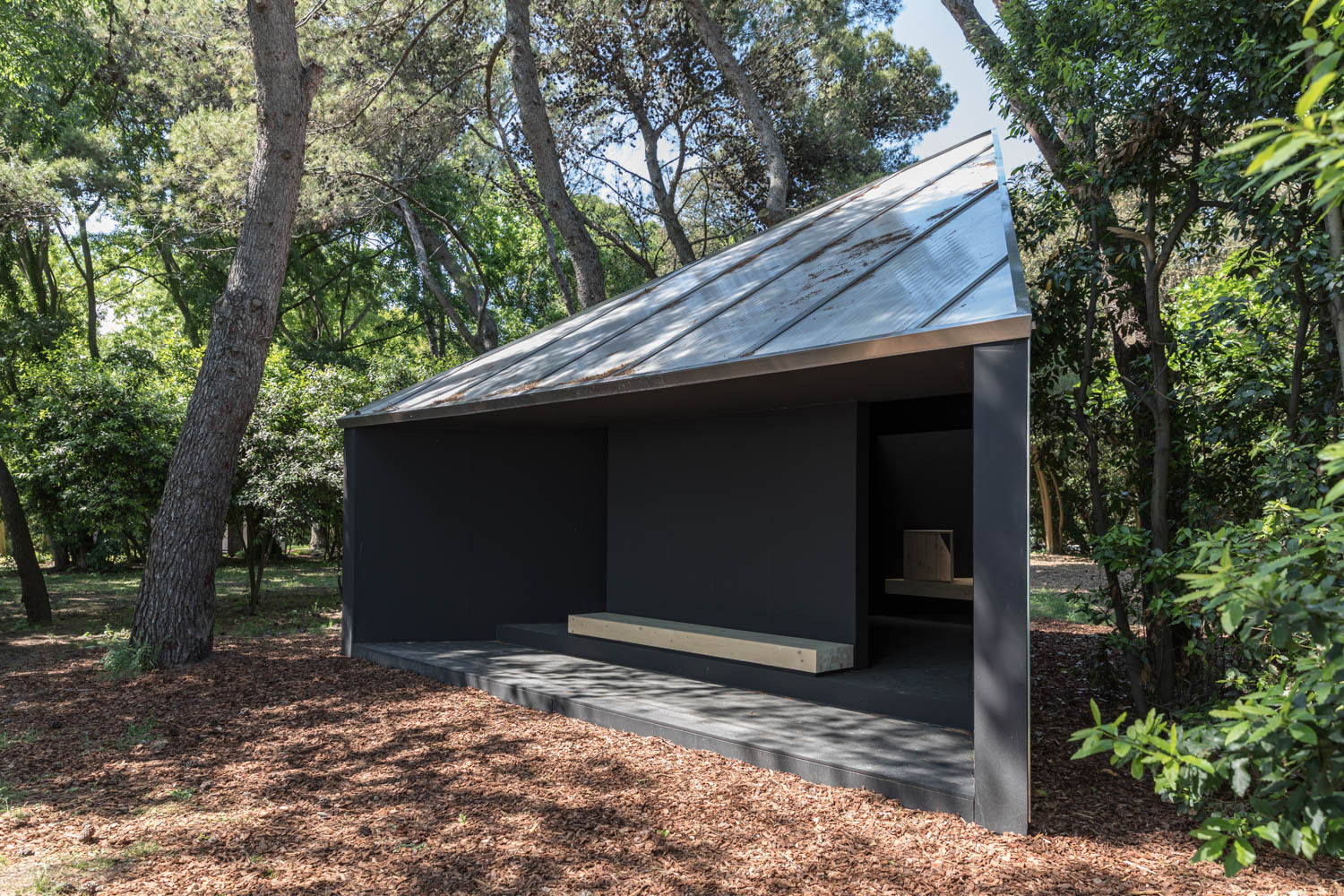 New York architect Andrew Berman offers up one of the simpler designs with a chapel that draws inspiration from sheds and other simple shelters. Painted white and framed in wood, it’s clad in translucent polycarbonate sheets with an interior lined in black painted plywood folded down from the apex of the volume so daylight can enter.

“The structure is a precise form of anonymous origin; an indeterminate presence in the landscape. The porch is a place for all to gather; a place from which to look out and survey one’s surroundings. The bench within proposes a place to sit. It is a space for looking inward, under light amidst darkness.” 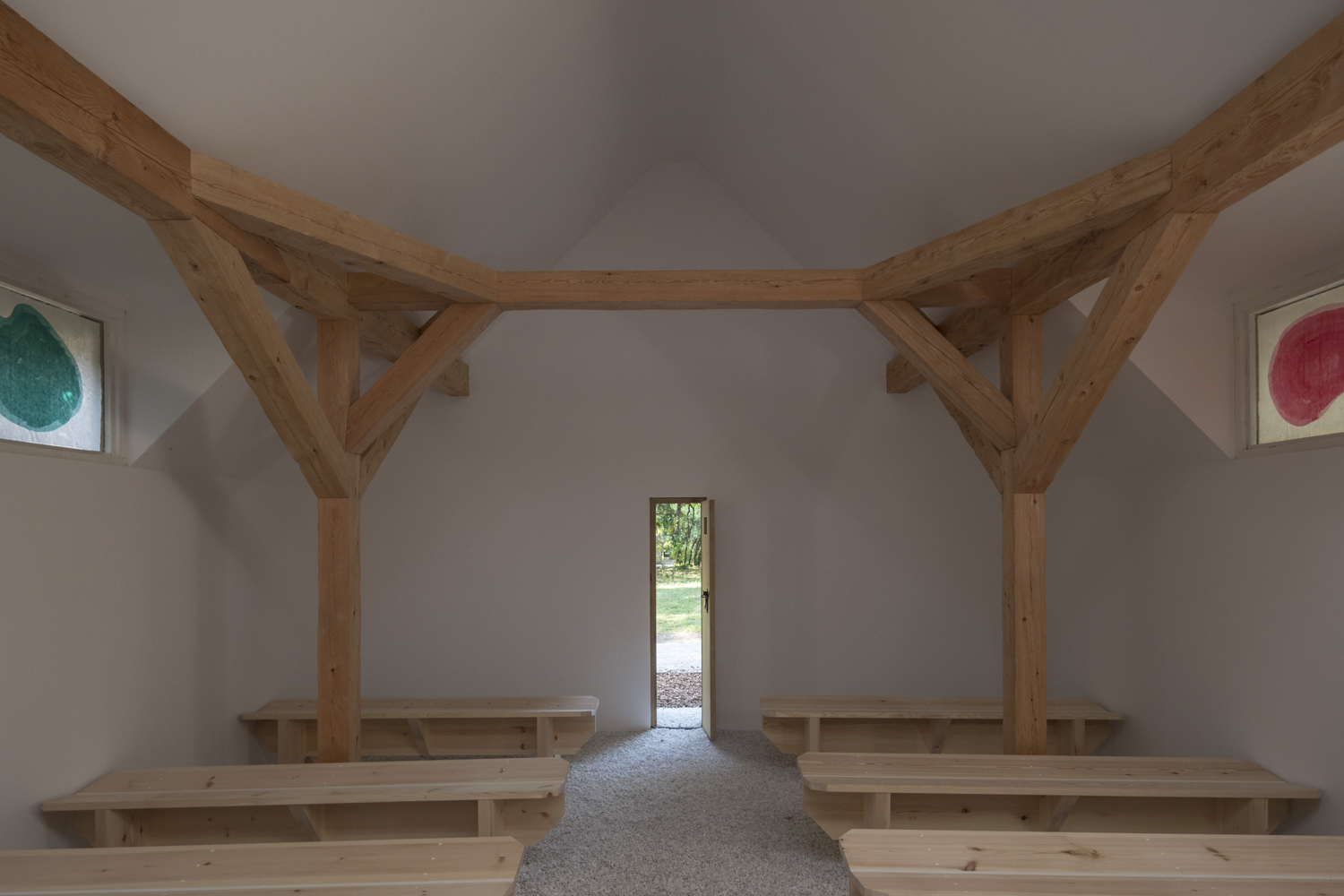 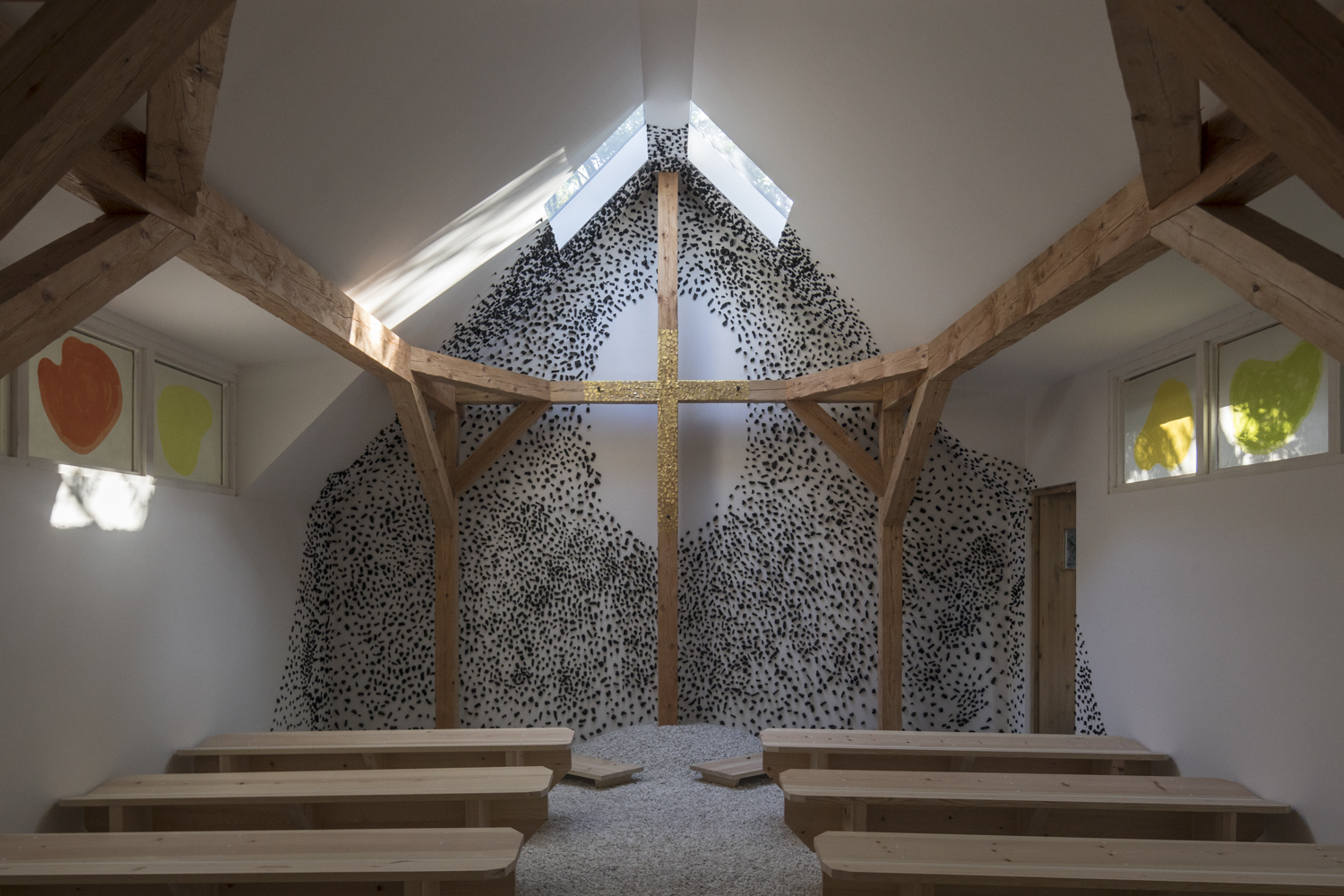 In the 17th century, about a hundred years after its arrival in Japan, Christianity was strictly prohibited and repressed within the nation, with citizens reportedly subjected to a test requiring them to step on crosses or statues of the Virgin Mary to see if they were ‘hidden Christians.’ Those who refused were executed. Japan’s Terunobu Fujimori cites this tale as the basis of his chapel design.

“The association between Christianity and the cross is unchanged in contemporary Japan, and even a small building surrounded with houses in the city can be identified as a church due to the fact that a cross stands atop its roof. The cross is unique as a symbol in the religious history of the world. Buddhism, Islam and Confucianism do not use scenes of death as symbols of the most important tenets of their faith. Buddha, Muhammad and Confucius were surrounded by disciples and died peaceful deaths. Designing a chapel for the first time, I decided to make the cross my theme.”

The cross is incorporated into the framework of the building, seen repeated several times inside, with the central cross poking through the roof to show a smaller one from outside. The exterior of the church is clad in charred wood, and the charcoal ‘seeps’ through the white walls to the interior, with a blank white spot emphasizing the primary cross.

All photos by Alessandra Chemollo