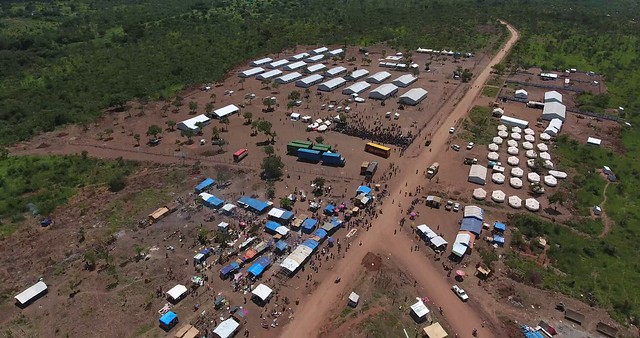 How can we make our cities more adaptable to floods while also managing constantly growing populations? Solutions will vary depending on local conditions, and will likely require a delicate balance between accepting the reality of housing more people than ever and avoiding out-of-control sprawl. Migration and the resettlement of climate refugees will be one of the greatest challenges cities face in the coming decades. Tens of millions of people will be forced from their homes over the next ten years alone, according to a 2017 report.

A 2018 World Bank report projects that 143 million people could be displaced by climate change impacts in sub-Saharan Africa, South Asia and Latin America by 2050. Hundreds of thousands have already been displaced by flooding in Bangladesh, some 2,300 Puerto Rican families are seeking permanent housing in the United States after Hurricane Maria and coastal communities in Alaska and Louisiana must immediately relocate lest they disappear into the sea. People from areas prone to storms, floods, tornadoes and other extreme weather events have already begun to move across the country to seemingly safer locales.

Climate change refugees are already a reality, and they’re a permanent phenomenon, yet they still don’t have any formal definition, recognition or protection under international law. Treated like a temporary problem and a threat, they’re typically housed on the fringes of cities, making it difficult for them to put down roots, get jobs and operate in society. In fact, classifying marginalized refugee settlements as impermanent prevents them from becoming their own cities with functioning laws, systems and protections, even when their populations number in the hundreds of thousands, as is the case in Dadaab, Kenya.

Like it or not, our new reality of climate change will require a lot of flexibility as the world undergoes massive transitions. Breaking through mistrust and fear and strengthening our humanitarian obligations to each other is the only way to peacefully reorganize our cities to manage these challenges. Flimsy temporary solutions – often gimmicky in nature – won’t help cities absorb newcomers in any meaningful way.

While nowhere is safe from climate change, some places with fare better than others. Within the United States, cities like Seattle, San Francisco, Portland, Minneapolis, Salt Lake City and Denver will become increasingly attractive to people fleeing more threatened locales, and they must prepare for a general, ongoing influx of transplants in the immediate future. That means not only planning for continued growth, but ensuring that far more of it is affordable, possibly even maintaining a percentage of housing stock explicitly for this purpose.

The Netherland stands as an interesting example of how this can be done – and subsequently destroyed. In 1999, the nation was able to absorb large numbers of refugees fleeing Kosovo without creating a housing crisis thanks to abundant affordable social housing that was maintained as a matter of state policy. As architecture historian Michelle Provoost of Crimson told Dezeen, the Netherlands now has housing problems because the social housing was sold off. “This is one of the results of the neoliberalization of our country,” she says.

Projects like Startblok, a revolutionary housing project for refugees and Dutch youth in Amsterdam, might help turn anti-refugee attitudes around. The apartments house 283 Dutch students and 282 refugees in an affordable structure made of converted shipping containers, with everyone converging in the building’s communal areas. The strategy literally breaks down walls between the locals and the refugees, promoting a depth of compassion and understanding that would be difficult to achieve otherwise.

There’s no shortage of interesting ideas and viable strategies to make both existing architecture and new construction more climate change resilient – it’s just a matter of prioritizing their implementation. We should be making cities more stormwater-permeable, filtering the air on a larger scale, experimenting with bioplastics, integrating renewable energy sources, learning from indigenous knowledge of more sustainable and climate-appropriate building materials and methods, and retrofitting older structures to make sure they survive.

The people who benefit most from the status quo may attempt to hold back serious attempts to combat oncoming challenges and catastrophes, but it’s only a matter of time before getting onboard will no longer be a choice.