The time to talk about climate change as if it’s merely a hazy possibility that won’t occur in our lifetime anyway has long passed. Multiple recent reports have made it clear that it’s already happening, and its effects will be much worse than previously expected.

In 2016, the Paris climate accords set a goal of limiting global warming to two degrees Celsius (at which it’s already failing); the UN’s Intergovernmental Panel on Climate Change now says two degrees is both inevitable by the year 2040 and genocidal, set to cause the death of all coral reefs, extreme wildfires, heat waves and other weather events that will subsequently threaten the world’s food supply and transform the global economy.

Clearly, addressing the problem at its source is the most crucial course of action. For the sake of the planet and virtually all life upon it, including our own species, we must rework practically every aspect of civilization, from our energy infrastructure and agricultural practices to corporate and governmental operations (because, while the efforts require widespread support and small actions are still important, the onus to lessen the impacts of inevitable climate change cannot be placed on individuals.) Technology and architecture won’t save the world alone, but it can help, and if we’re going to head off some of the most immediate climate change effects, we have to start now.

Architects, engineers and urban planners have already begun to work on approaches that range from visions of futuristic cities that would take many decades to build from the ground up to more practical and immediate solutions that adapt to the new normal. Extreme weather, rapid influxes of climate refugees and the need to continuously evolve in response to the changing world are among the top issues to address.

Flooding is inevitable. Stronger, more frequent storms are already wreaking havoc on the United States and throughout the world, leaving catastrophic flooding in their wake that can extend much farther inland than anticipated, particularly along rivers. The pace of ice melting in Greenland and Antarctica is on track to raise sea levels 26 inches by the year 2100, and many scientists consider that to be a conservative estimate. Cities like Miami, Houston, Jakarta, Bangkok, Manila, Lagos, London and Shanghai are at immediate risk due to groundwater extraction, soft sediments and, in Miami’s case, permeable limestone that will allow water to rise from underground.

Sea levels are rising faster on the east coast of the United States than anywhere else, and locales from North Carolina to Florida already lost 5 inches of coastline between 2011 and 2015. Researchers believe it has something to do with the slowing Gulf Stream, the effects of El Niño cycles and shifts in major Atlantic Ocean weather patterns. Experts predict that many cities could be swallowed altogether within the lifetime of children born in the current decade. 3D animated Google Earth gifs by Climate Central based on an extreme sea level rise scenario from the NOAA show us what this could look like in a few major cities, and it’s not good.

So what are cities doing to plan for this? Not much, in most cases, but that could change soon. Many of the most vulnerable cities are consulting with experts on plans of attack that involve building in safer areas, transforming the most flood-prone zones into buffer areas, integrating green spaces capable of absorbing large quantities of stormwater, elevating new structures, improving the climate resiliency of low-income housing and creating systems that work with, rather than against, a changed waterfront.

For a recent competition called Resilient by Design, which challenged design teams to reimagine the Bay Area in the face of potentially devastating climate change, global design firm HASSELL envisions a new network of green spaces and “water-loving places” connected by canals and creeks. Forging these wide, green waterways creates controlled paths for flooding and plans to use them for transport and recreation. Native plants treat runoff, a “living levee” forms a wetland for restoring habitat and holding stormwater and schools built on higher ground become hubs for water treatment and community activities.

In Boston, SCAPE Landscape Architecture collaborated with the Mayor on a vision to protect the city’s 47 miles of shoreline as part of the Imagine Boston 2030 initiative. Using the city’s Climate Ready Boston 2070 flood maps, the team demonstrates how flood-resilient buildings, elevated landscapes, waterfront parks, connections to the waterfront and a deployable flood wall system could address rising water and enhance community access to the waterfront at the same time. Key transport corridors like Main Street and Bennington Street will have to be elevated.

“We’re not just planning for the next storm we’ll face, we’re planning for the storms the next generation will face. A resilient, climate-ready Boston harbor presents an opportunity to protect Boston, connect Boston, and enhance Boston, now and for the future,” says Mayor Martin J. Walsh. “As we enter a new era in our Harbor’s history, Boston can show the world that resilience is not only the ability to survive adversity but to emerge even stronger than before. That’s the promise of a Resilient Boston.” 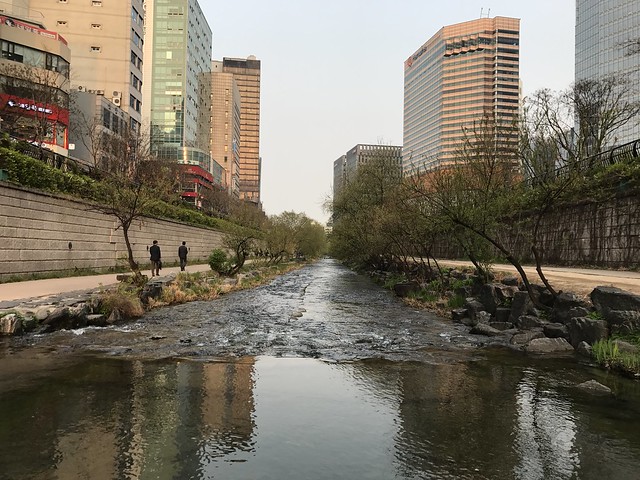 In fact, reintroducing natural systems could be key, all over the world. For Seoul, architect Chris Reed of ASLA proposes giving water more space in the city with the knowledge that we can’t hold it back and might as well do what we can to enjoy it. We could “bring new life and richness into the public realm” with fish parks, canal streets, water plazas and other spaces, and transform vacant land into new wetlands that bring value into adjacent neighborhoods. The city’s Cheonggyecheon River is already a great example of this approach, uncovered from beneath roadways and highways and renovated into a central riverfront offering both floodwater containment and recreational space in the heart of downtown.

Water, of course, isn’t the only force of nature we have to protect ourselves from. With wildfires raging across much of the West, many people are wondering what they can do to make their homes more fire-resistant. While land management practices will have to change in many parts of the country to anticipate and mitigate wildfires to the greatest extent possible, fireproofing could at least help salvage some structures when they can’t be stopped. The good news is, a few small changes can make a huge difference, and they can be surprisingly affordable, too.

Las Vegas-based GigaCrete makes prefab houses with recyclable, non-flammable materials including steel frames, interlocking wall panels and special wall coatings that make them hurricane resistant, bulletproof and waterproof to boot. A 576-square-foot, one-bedroom model costs just $24,000, and they can be scaled up and customized. Other approaches involve the use of tempered glass, minimizing exposed wood, non-flammable decks, rooftop sprinkler systems, mesh screens that prevent smoldering materials from getting into vents and strategies to clear brush. It’s likely that features like these will increasingly be built into new construction in fire-prone areas.