The concept renderings for this wildly unusual hotel design in an abandoned Chinese quarry debuted on the internet over a decade ago, and now the finished complex is welcoming guests. The InterContinental Shimao Wonderland is the “world’s first underwater quarry hotel” set into the cliff faces of the 288-foot-deep former quarry, with the lowest two floors descending beneath the surface and the highest two poking out above ground level. Designed by London- and Shanghai-based architect Martin Jochman of Atkins in 2006, who later brought the project to his own firm Jade + QA, the hotel is described as a “groundscraper.” 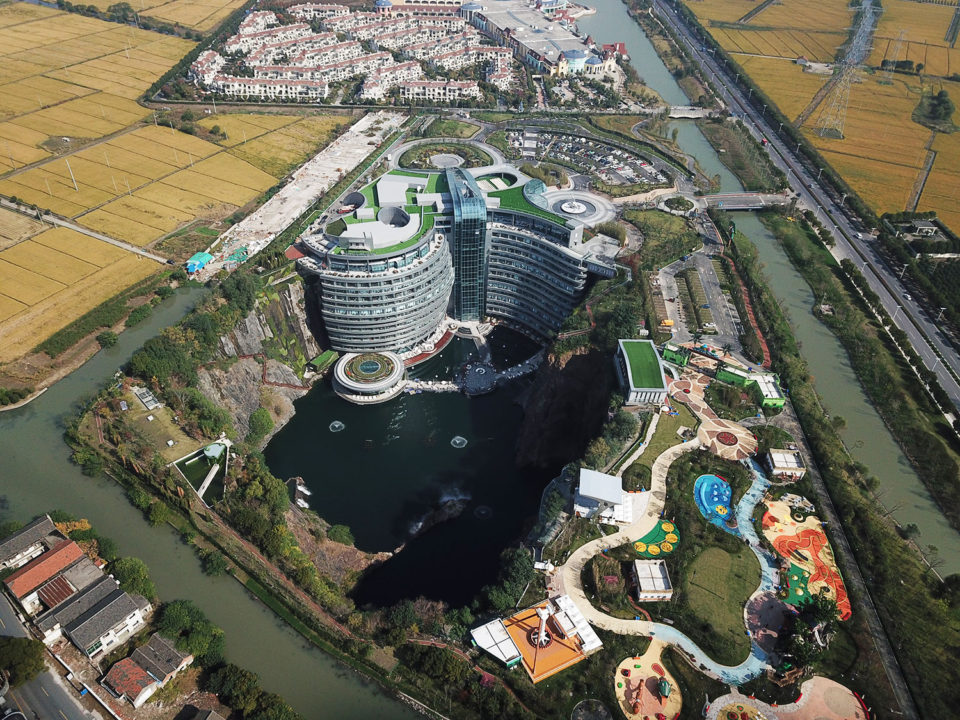 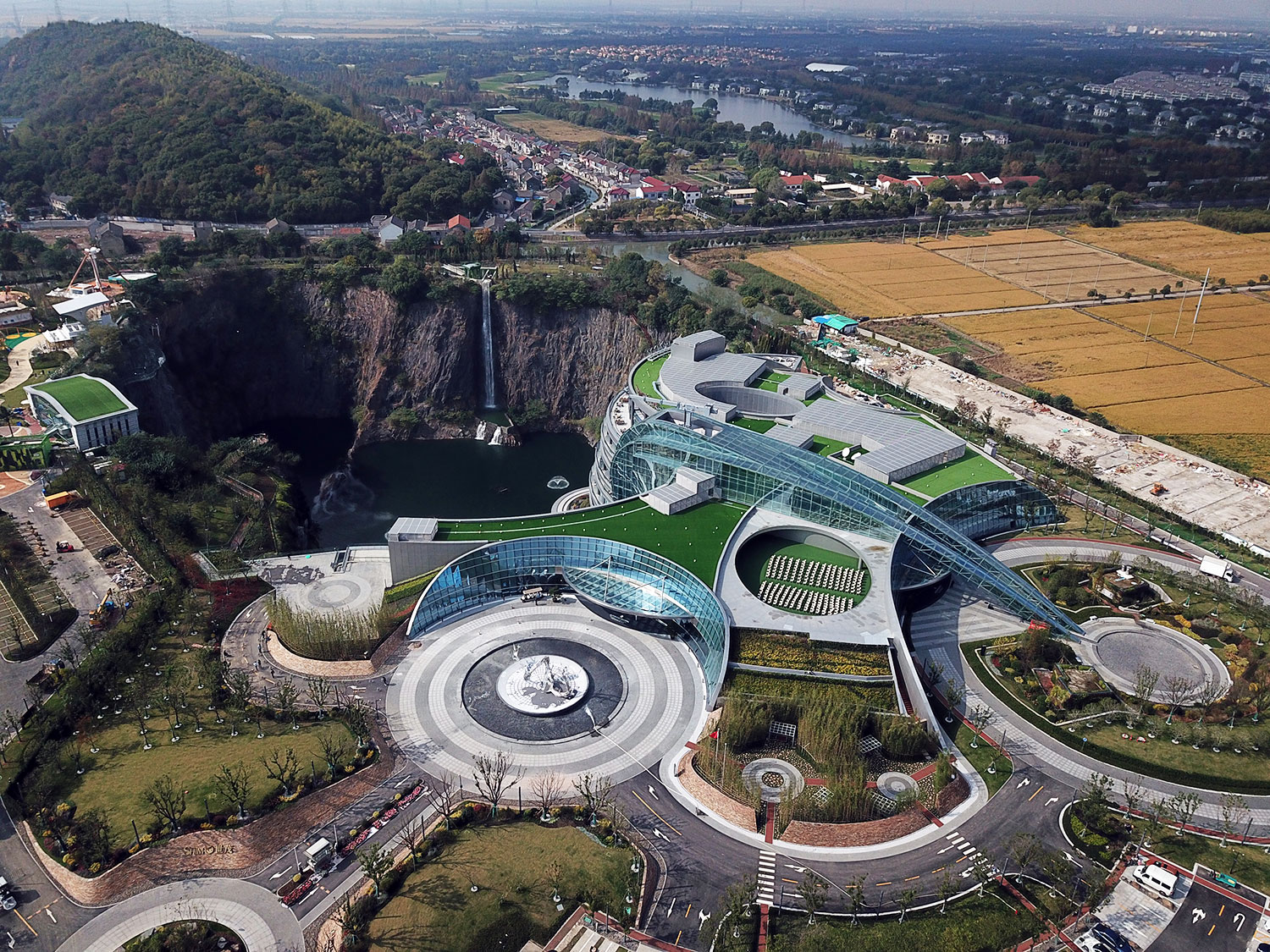 Jochman says his design takes inspiration from the site itself – its shape, its unusual nature and the potential it still had after decades of disuse. The structure follows the contours of the cliff faces and features a glass central circulation atrium full of elevators and staircases that mimics the look of a waterfall cascading down to the pool below. Inside, the 16-story hotel contains 337 guest rooms, a large conference center, a spa, an underwater restaurant and water-based leisure facilities; visitors who aren’t staying overnight can enjoy a range of adventurous activities in the outdoor entertainment park as well as the cantilevered glass walkway extending over the water. 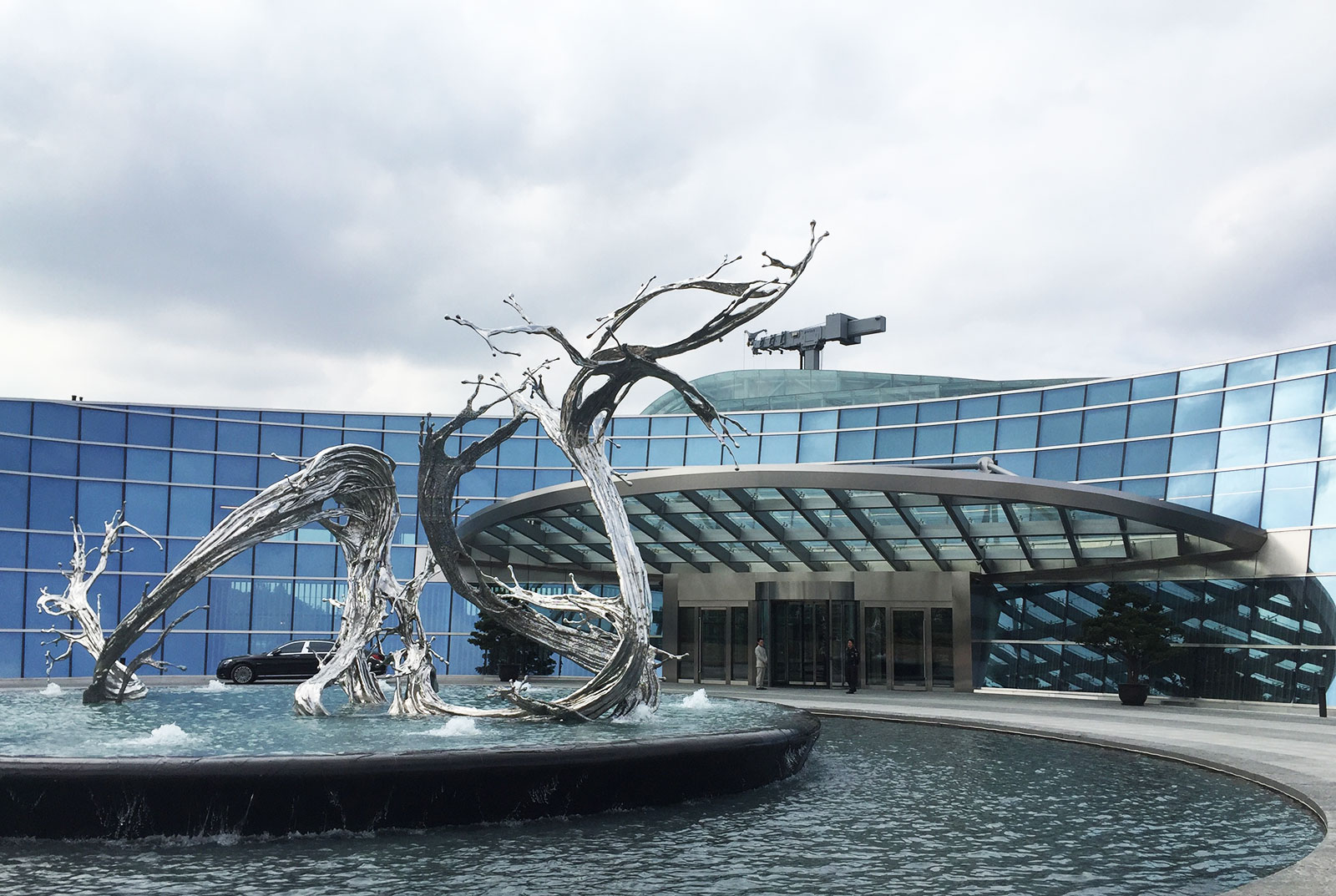 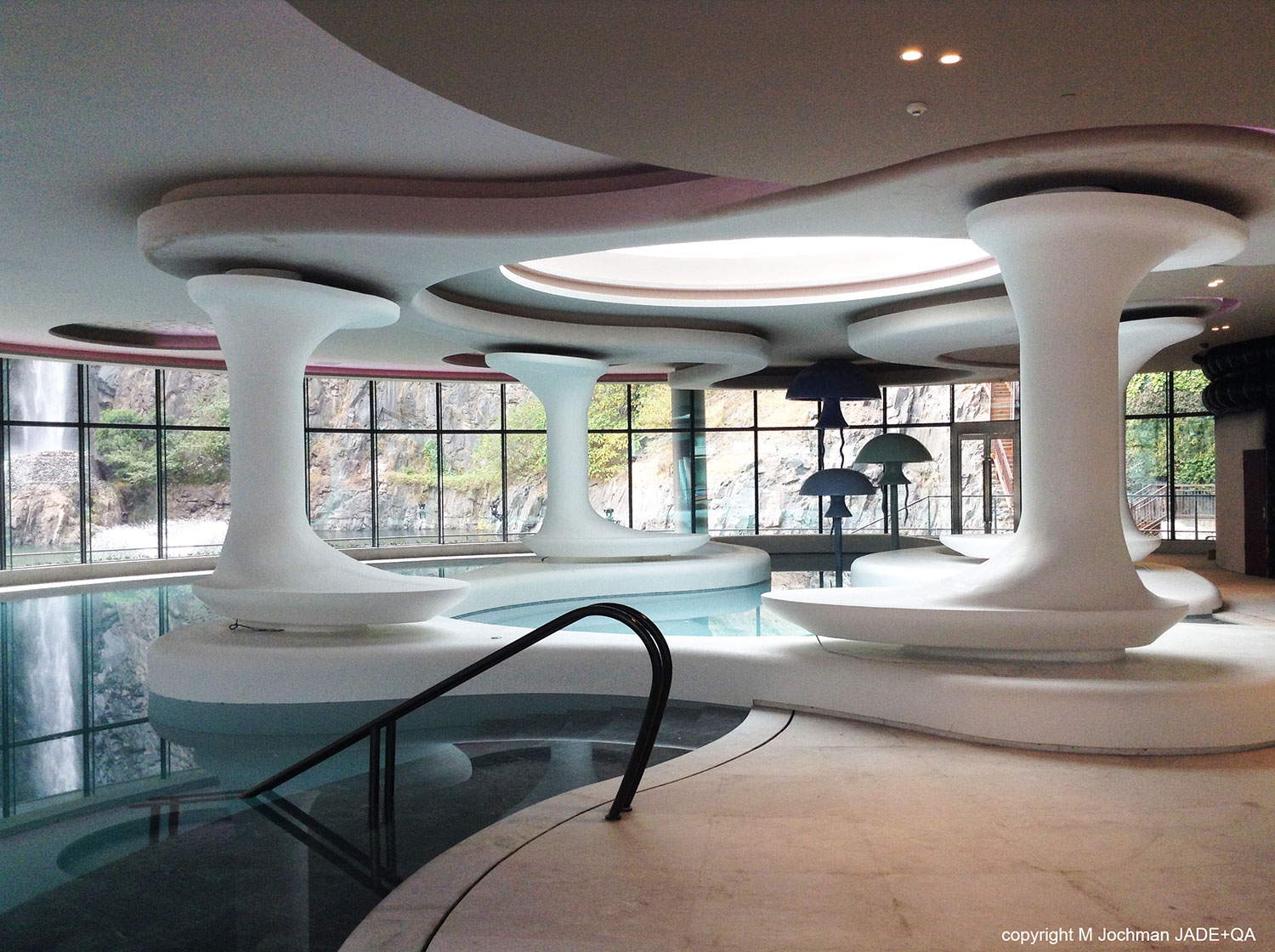 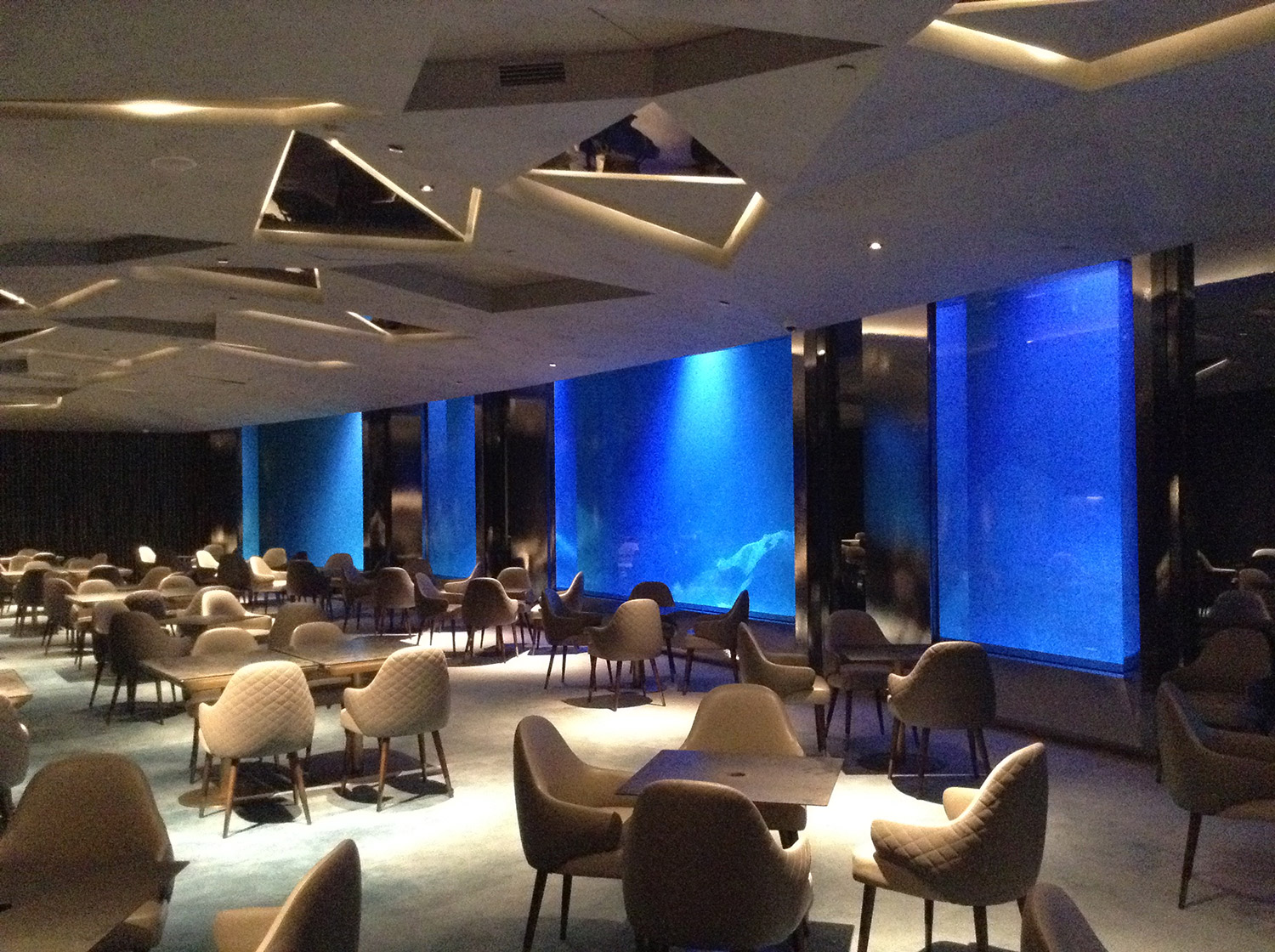 The convex and concave guest wings on either side of the “Glass Waterfall” are described as “Hanging Gardens,” and the underwater areas are called “The Lagoon.” These elements are intended to seamlessly segue into the rocky cliff faces on either side. Jochman hopes the hotel will not only become a landmark, but also an extension of the rugged landscape itself. 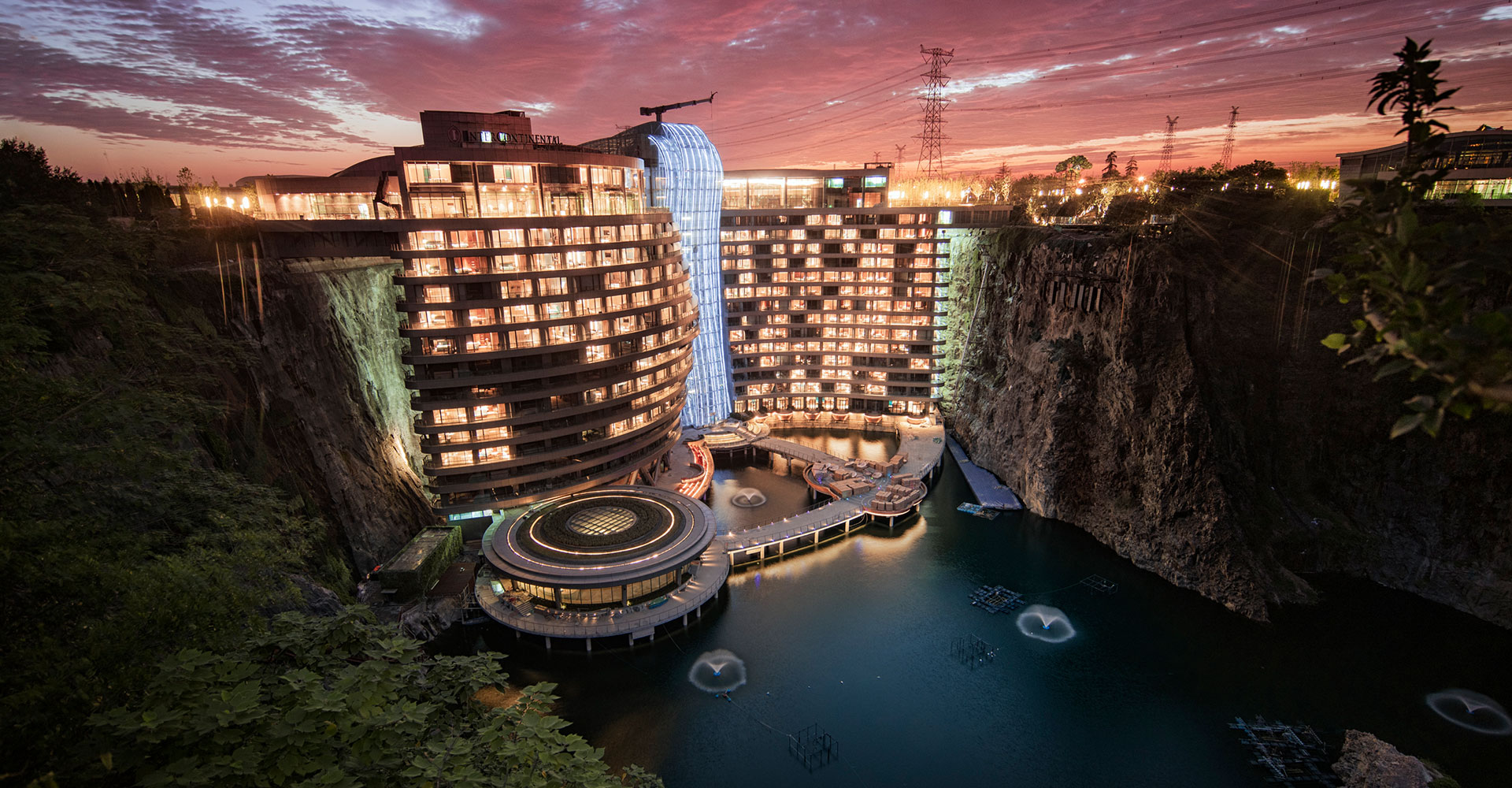 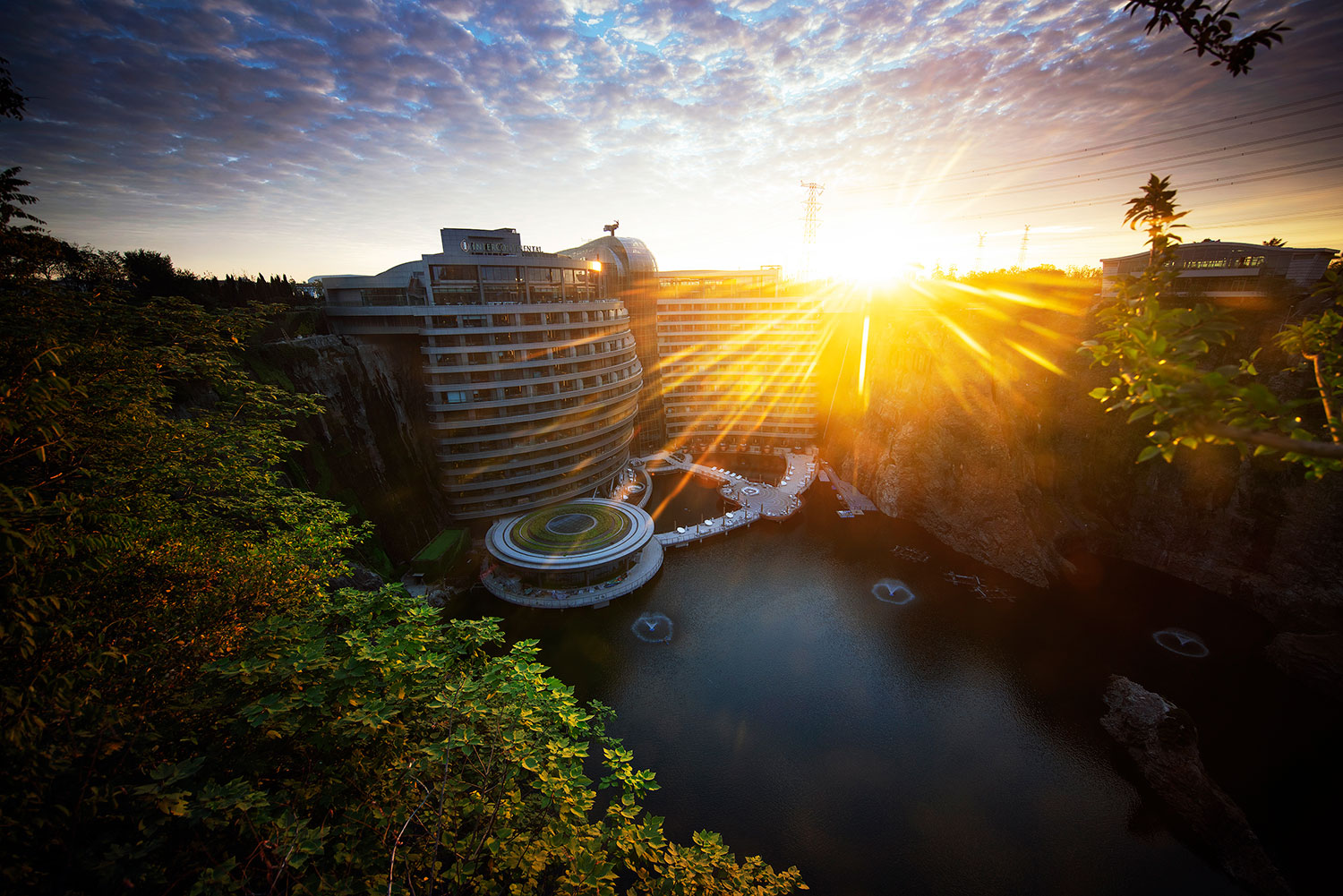 “Apart from minimising the impact of this building on the local environment by its orientation and adopting low profile with only 2 floor levels above the ground, the mainly passive sustainable features will take advantage of the orientation, low profile, grass roof minimising the impact of North wind and providing biodiversity. The unique microclimate caused by the thermal properties of the quarry rock mass and the quarry lake, cooling the structure in the summer and heating in the winter will also have positive effect on the energy consumption of the hotel.”

“This successful ‘Brownfield’ site recycling (or even up-Cycling) by utilisation of a disused industrial quarry site and giving it new purpose will make this project important contribution to the principles of sustainability in China and around the world giving an example how difficult industrial sites can be given new lease of life.”

The hotel cost $555 million to complete, and suites start at $4,270 per night. Jade + QA is also responsible for the super-tall Burj Al Arab in Dubai.