From luxury penthouses to sky-high secret slums, urban rooftop architecture is like a hidden world of its own, often invisible from street level. Most of us go about our daily lives in the city never knowing what exists right above our heads. In Bangkok, architecture firm WARchitect has completed a new example: an exclusive modern getaway that takes full advantage of panoramic views and a lack of prying eyes with lots of glass walls. 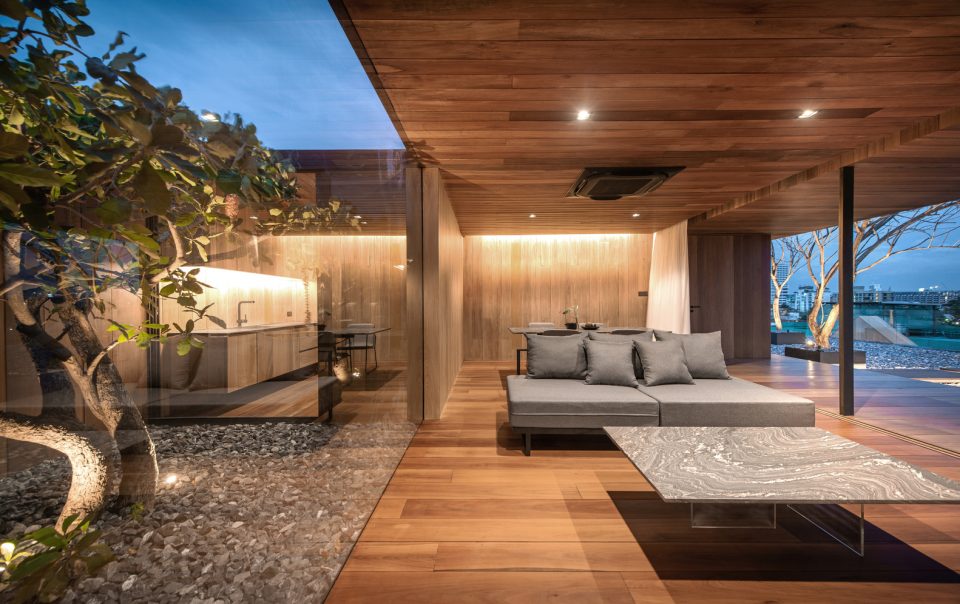 “The Skyscape Rooftop House” is a residence designed for the owner of a 5-story apartment building who decided he wanted to make use of the building’s empty rooftop, long used for nothing more than some water tanks. Because it’s less than half of the size of many of the skyscrapers around it, it still feels within the scale of its surroundings, but clears the rooftops of most of its neighbors. 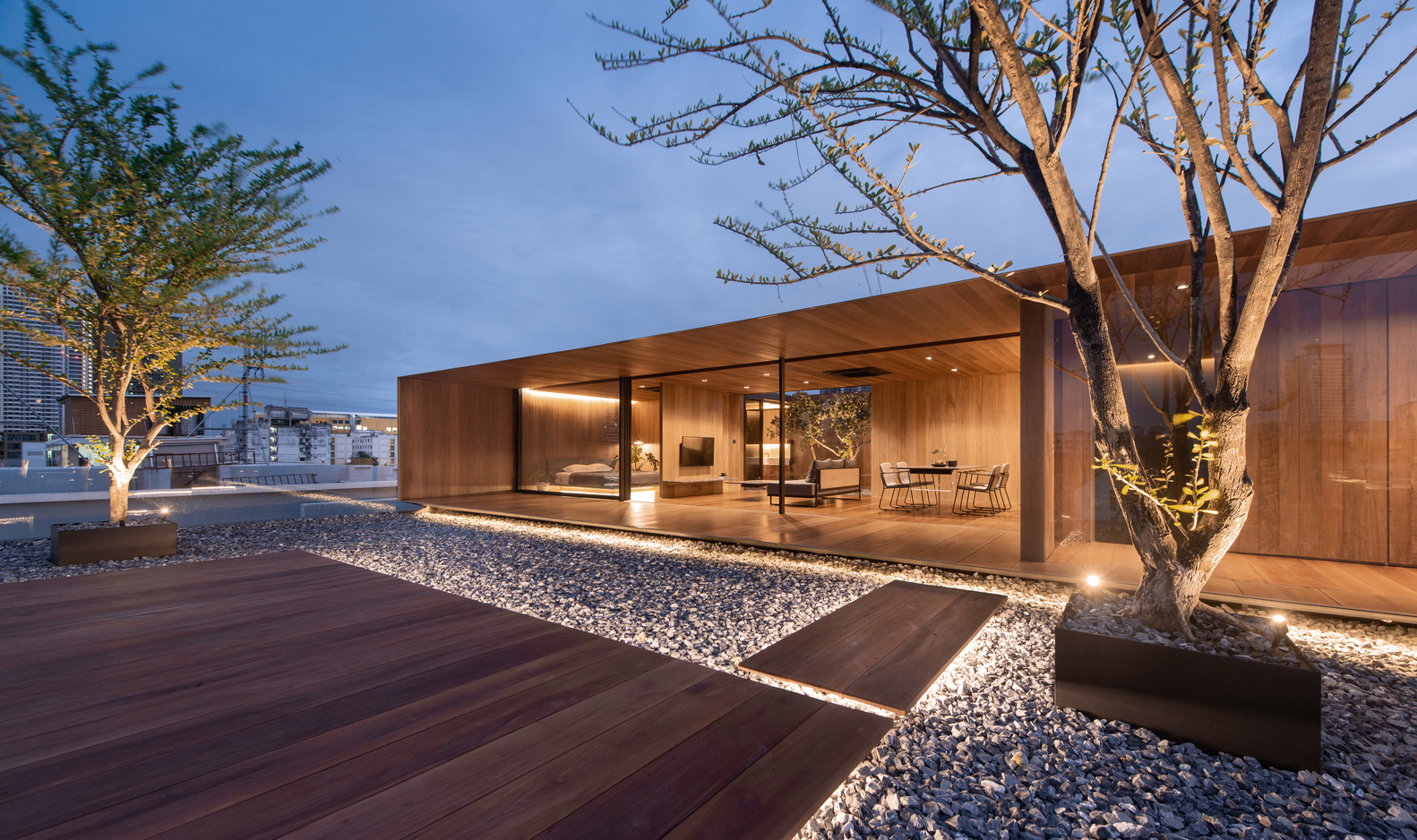 The architects say they wanted to avoid an obvious contrast between the house and the apartment below, so they designed it so it can’t be seen from public roads (which does kind of make you wonder what the rest of the building looks like doesn’t it?) 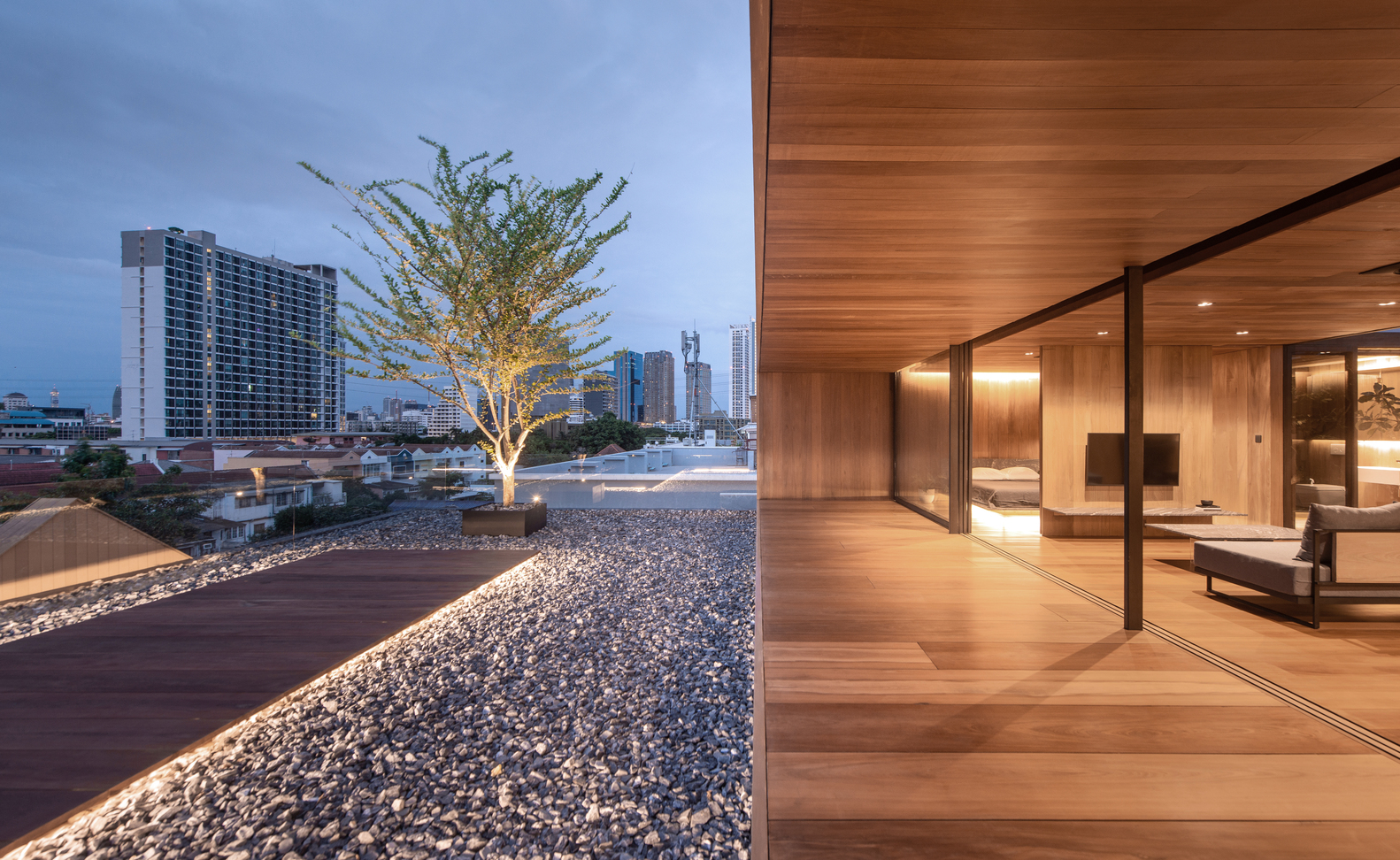 “Our idea was not to make this house feel like a building, but to free it from form,” they say. “We wanted it to be just a borderless box that emerges out of nowhere in the sky, as if the thickness of the wall and roof were non-existent, but still able to make holes in the ceiling to install curtains, air conditioners, and embed lights.” 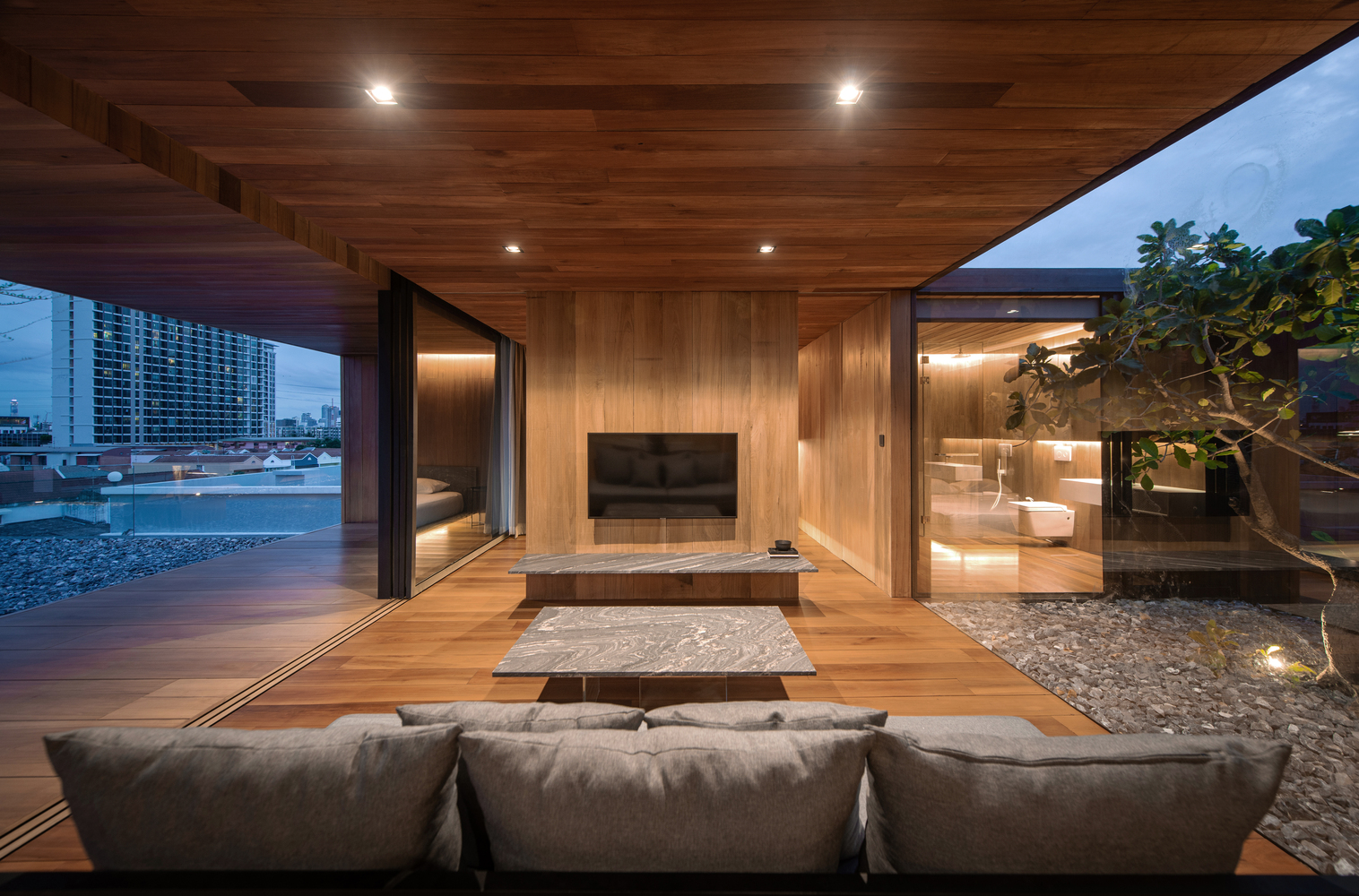 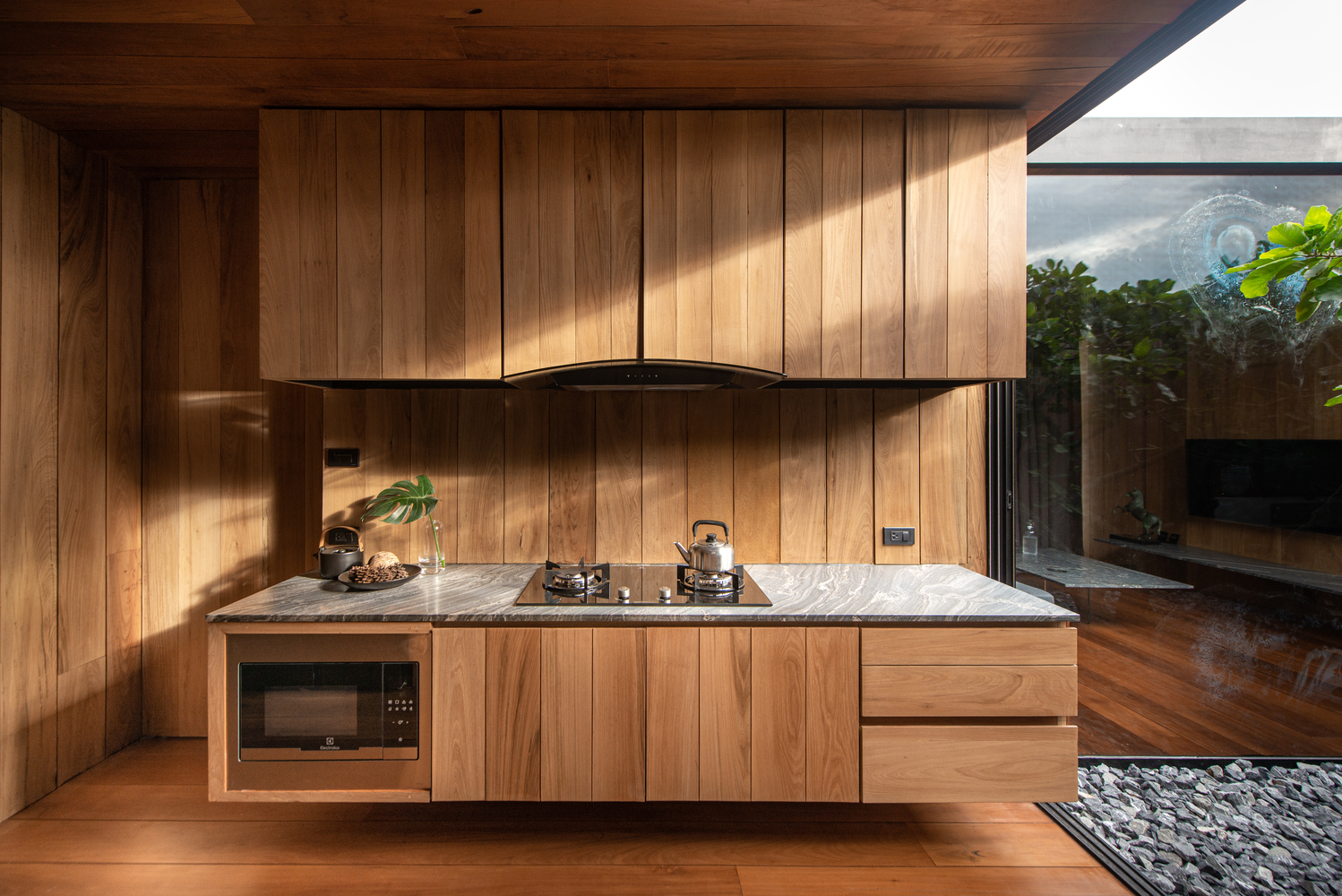 “Our intention was to give an illusion to onlookers that the entire ceiling was in the same straight line even though we featured a drop ceiling and a slope that was intentionally used to make the wall and ceiling look thin. These techniques may not be new in architecture. However, with this rooftop house, it is more special since a short distance between the main structure and the exterior helps disguise the techniques we used.” 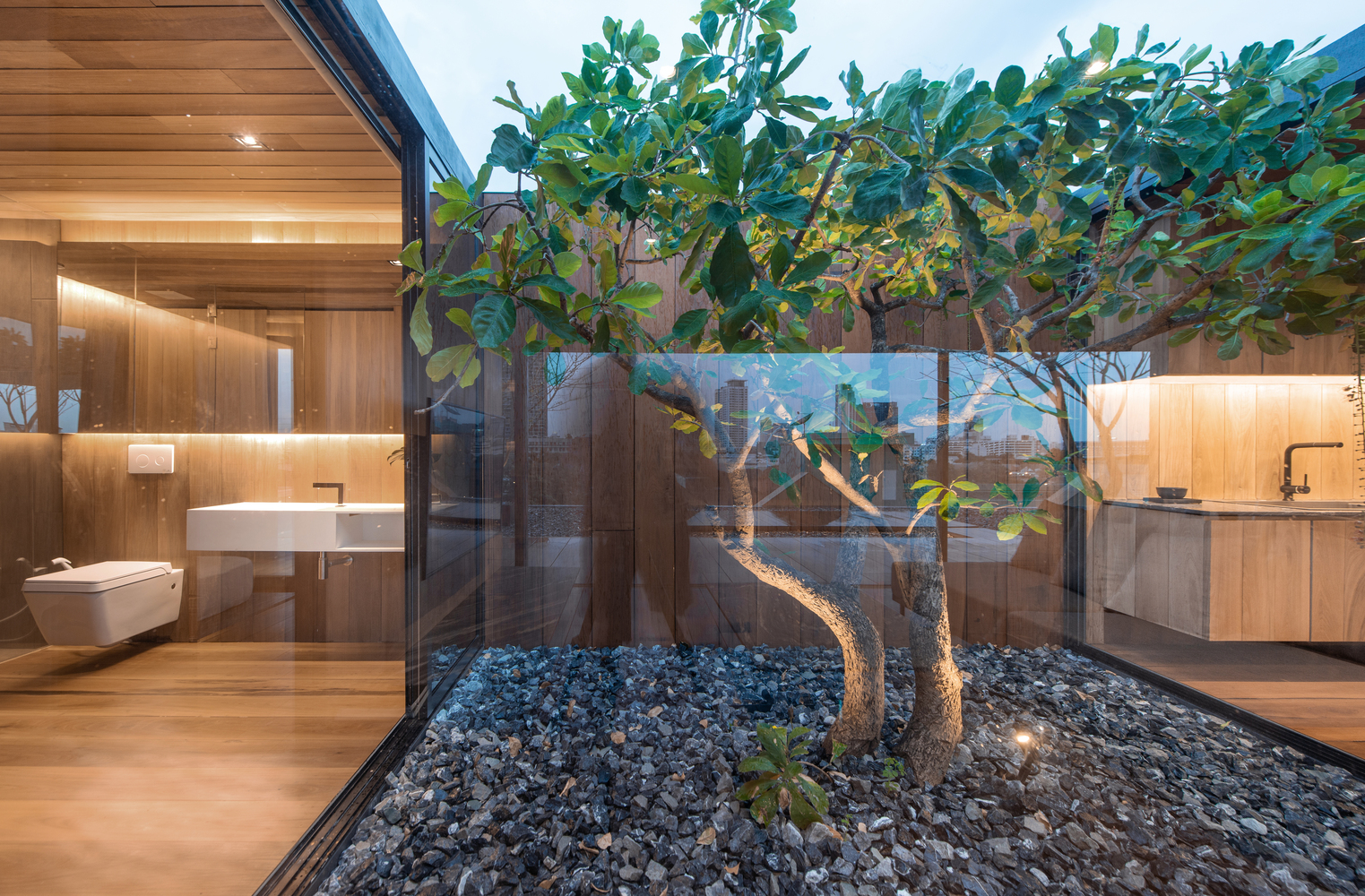 Because the owner lives alone and doesn’t often host guests, the architects decided they might as well allow him to enjoy the views from virtually every room in the house, including the bathroom. These glassed-in spaces are separated from each other by external courtyards. The interiors are all clad in Balau wood planks the owner already had on hand, many featuring flaws like cracks, saw marks and gnarls, to add color, character and warmth to the overall effect, balancing the look of the concrete surface.