Wow, a map/picture/image/representation of the entire internet – amazing except for the fact that, like many things, it is presented entirely without useful context. This nifty graphic has been compared to a Tootsie Pop and strongly resembles a plasma light ball. Admittedly, the image is interesting and compelling – but what does it really tell us about the compelling and amorphous reality we call the World Wide Web? 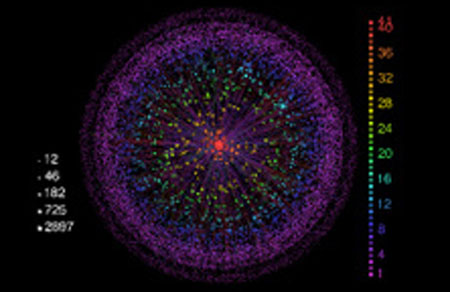 By far the most interesting part of the post where we found this image were the comments. An early comment points out that the post authors didn’t give proper credit to the original creators of the image. Further comments suggested that the ‘web’ and the ‘internet’ are not the same thing. Other commenters noted that the image doesn’t have a defined scale, nor any other form of key to help decipher it. One of the last points illustrates the general confusion, perhaps accidentally: “dude – its totally the boob that I keep hearing that there are pitchers of on the internets.” Oh well, at least we’ve learned that the internet is more complicated than a pretty spherical diagram!