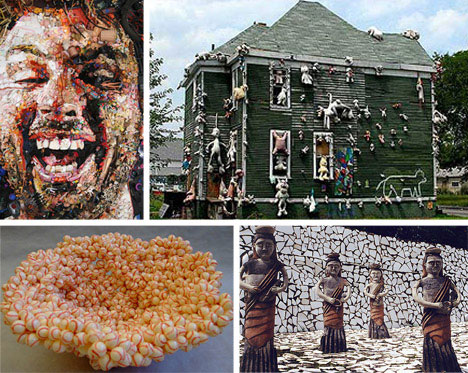 Why waste money and add to the world’s usable waste by buying art materials when there are so many strange and interesting objects out there to use for design projects instead? From small found objects to entire abandoned houses, the sky is the limit when it comes to the palettes of these amazing trash artists. Their subject matter is about as varied as their material choices, ranging from self-portraiture and crushed can paintings to imitations of Monet’s masterpieces and gigantic sculpture parks. 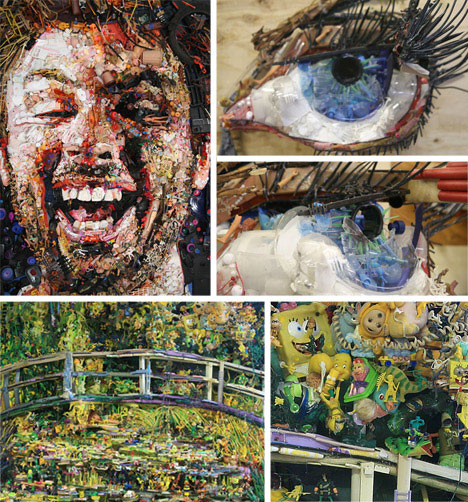 Tom Deininger is no doubt one of the most creative and versatile trash artists in the world. His collages viewed from a distance seem like they could be made of anything – and they are indeed made out of just about everything he can find. He “majored in women, art and surfing” at college and “learned little about all three” by his own humorous admission. About a decade ago he moved to Rhode Island and started toying with found objects as artistic materials. In addition to creating his junk art Tom also lectures at local schools and colleges and creates canvas paintings. 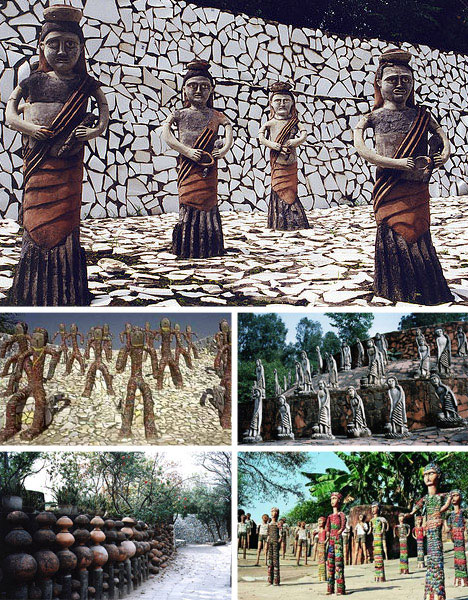 Nek Chand Saini‘s undeniable opus is his 1.7 million square-foot Rock Garden in Chandigarh – much of which he built on his own secretly and in his spare time. For years while working as a building inspector Chand reused found materials to begin constructing a remote complex of courtyards and sculptures out of pottery, concrete and other recycled materials. Since these constructions took place on a conserved plot of state-owned land they were nearly destroyed once discovered. The public came to his support, however, and rather than having his constructions torn down he was given workers and a salary to do his work with the official blessings of the city. His works have since traveled the world. 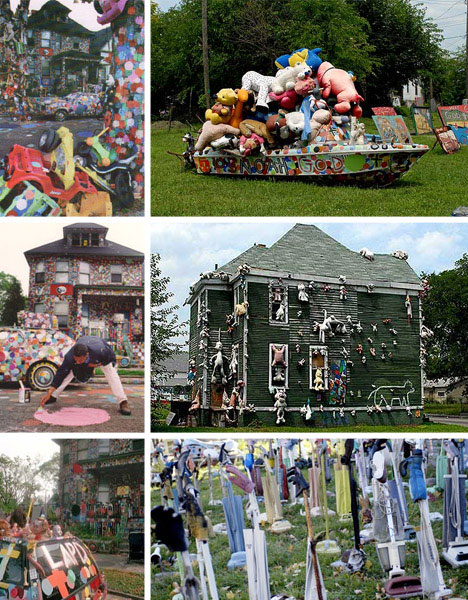 Tyree Guyton began the Heidelberg Project decades ago with the help of family, friends and neighborhood kids. As they cleaned up the streets of their area they began reusing the refuse they collected to fill the area with art. Deserted houses became massive sculptures and canvases, trees turned into places to hang strange found objects and dead lawns were developed into sculpture pedestals. Despite the destruction of many of these works by the city the project persists in the community. This project has breathed life and color into a city in need of both. 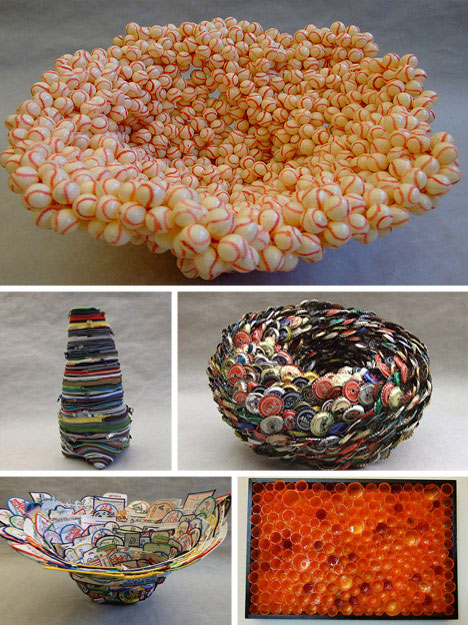 Elizabeth Lundberg gathers objects of a kind and recycles them into artwork that is sometimes serious, sometimes silly (such as a basket made of baseballs … get it? A ballbasket!). By changing the use of objects she encourages us to question their meaning and our relationship to them. Trained at the Haystack Mountain School of Crafts in mixed media and North Carolina State University in environmental design, Elizabeth has had her trash art featured in shows around the country. 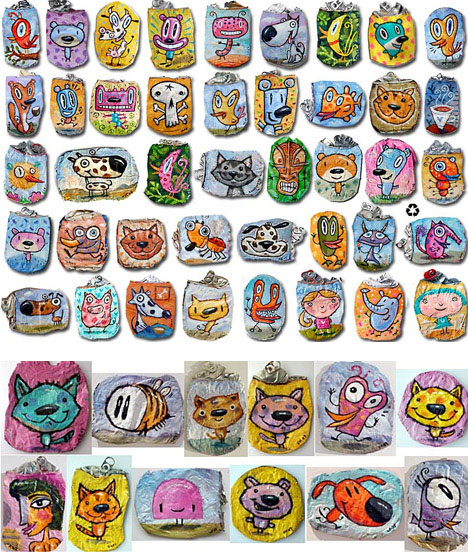 Charles Kaufman makes one kind of art … but he makes it well. His crushed can works involve flattened beer and soda cans which he paints by hand and then mounts individually. Of course, both the painting itself (being hand-done) and the can’s particular shape (being hand-crushed) is entirely unique. Aside from his crushed can works he also paints with a similarly engaging color palette and likewise cartoonish flare. 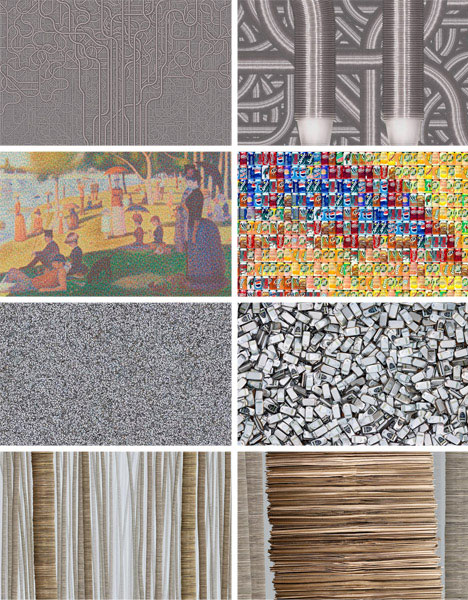 Chris Jordan‘s Running the Numbers series is not so much art made from trash as art representing the amazing impact of garbage and astounding scale of waste on our planet. The collection of portraits each takes on a single subject from office paper to aluminum cans and shows the quantities visually used by different industries or in varying specific circumstances (e.g. the number of plastic cups used on airlines every year). He makes these abstractly large numbers comprehensible by rendering them visual. Of his work, Chris says that by “employing themes such as the near versus the far, and the one versus the many, I hope to raise some questions about the role of the individual in a society that is increasingly enormous, incomprehensible, and overwhelming.” 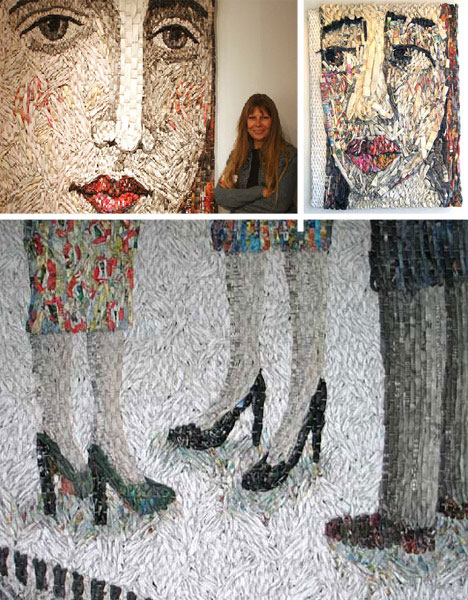 Gugger Petter has been obsessively creating works of two- and three-dimensional art from ordinary newspaper for decades. She applies lacquers to preserve these otherwise fragile works of art and selections different sections to achieve the colors, blacks and whites for specific areas of each work. She also sometimes paints the newspapers but often leaves them as they are. Her subjects are generally as typical and everyday as her materials – simple portraits of daily life.