Tracy Lee Stum is widely considered to be one of today’s finest street painters. She has traveled the world to be a featured artist in many festivals and events, and she currently holds the Guinness World Record for the largest street painting by an individual, which she completed in 2006. Tracy’s work contains many themes, from Biblical to exotic to the mundane. 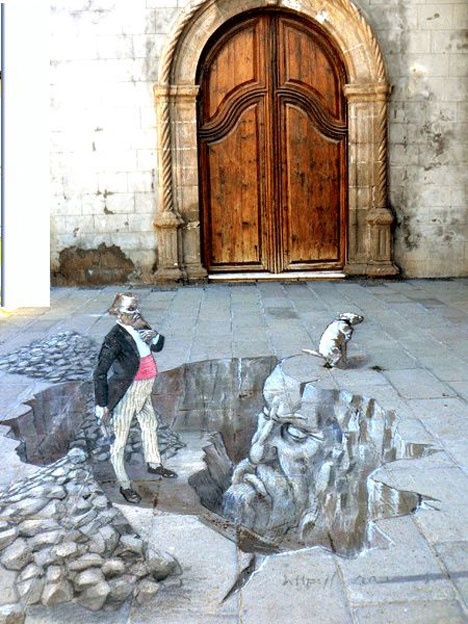 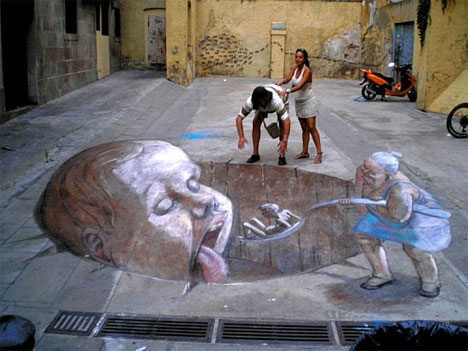 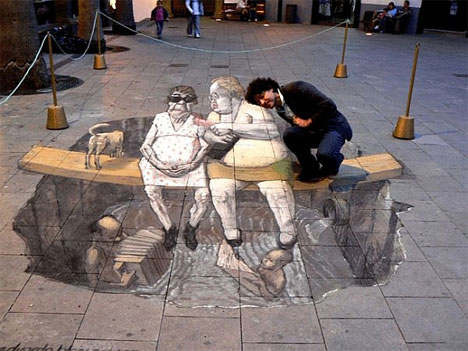 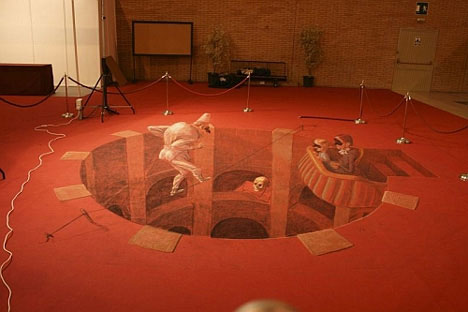 Eduardo Relero is a street artist working primarily in Spain. His fanciful illustrative style looks like storybook pages come to life, and indeed each of his anamorphic sidewalk chalk drawings seems to have a story behind it. 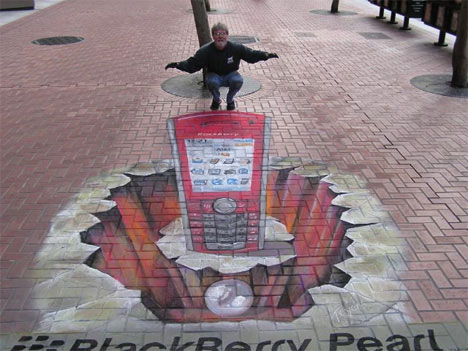 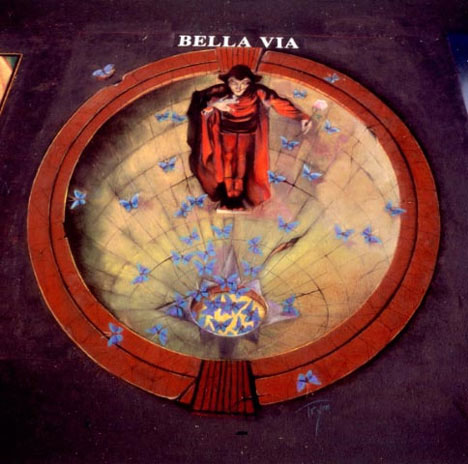 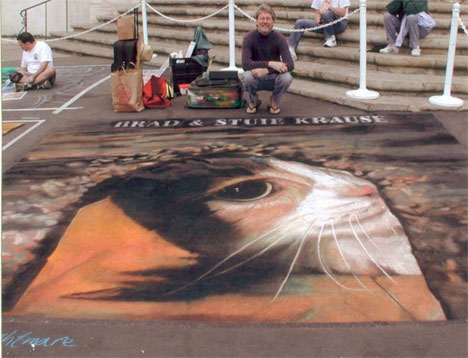 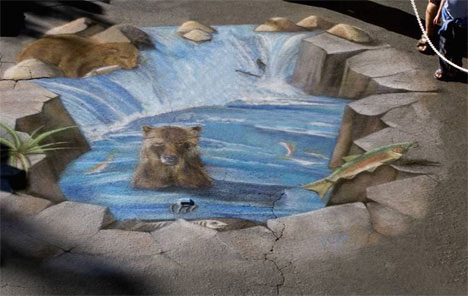 Rod Tryon has been adorning the streets of the world with his chalk drawings for more than 20 years, and was first inspired to try anamorphic designs in 1996. Of his paintings, Rod says “Entertaining the audience by creating an image that looks like it is coming up out of the street, or the impression of a hole opening up in the asphalt in front of you, is a special treat for the artist. Seeing crowds react to his 3-D pastel images, bring great joy to both the artist and onlookers.” 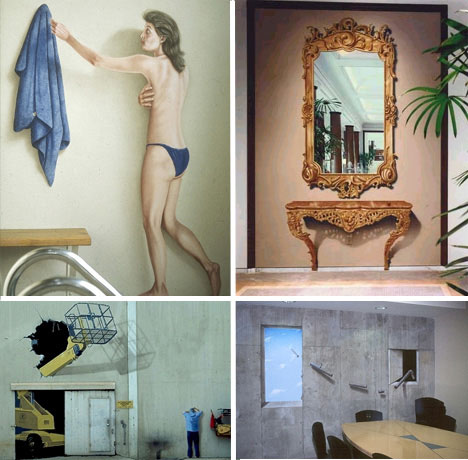 The work of Greg Brown isn’t meant to be accessible. His huge murals seem to jump out at the viewer, but that doesn’t mean they’re easy to interpret, and that’s how he likes it. Greg’s murals vary dramatically in style and content from one to another, due to the intense collaborative process he takes on with each client. They range from Dali-esque surrealism to classic trompe leil, with subjects including everything from construction equipment to miniature ships. 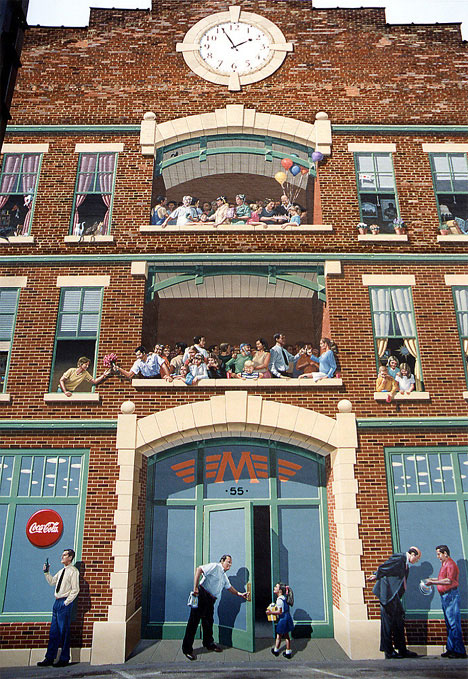 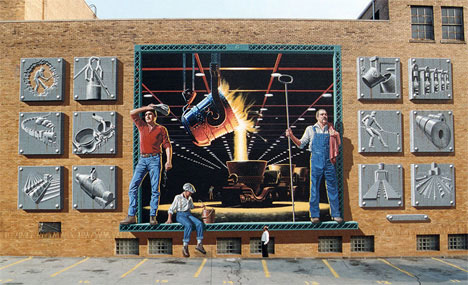 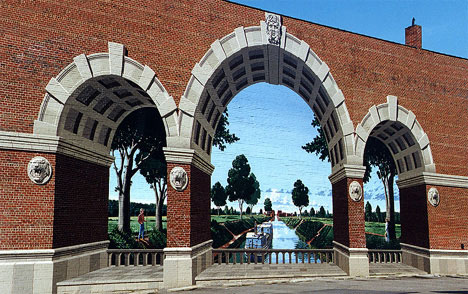 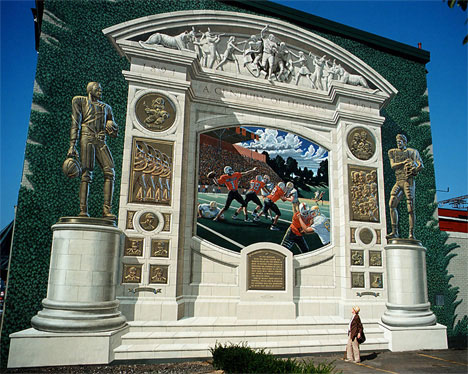 Eric Grohe was a professional graphic designer and illustrator for decades before beginning work on his renowned trompe leil murals. Eric’s murals appear to jump off of the surfaces that he paints on, and they grace walls all over the United States and the World, from Seattle Washington to Kuala Lumpur, Malaysia. Eric’s work reflects a patriotic all-American theme, and his depictions of scenes such as football games and picturesque towns have turned blank walls into works of art. 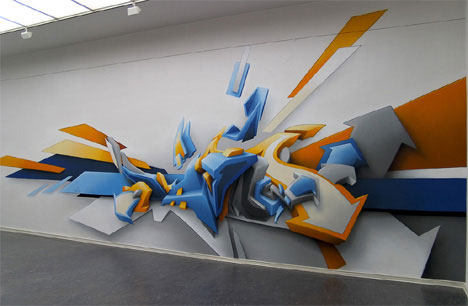 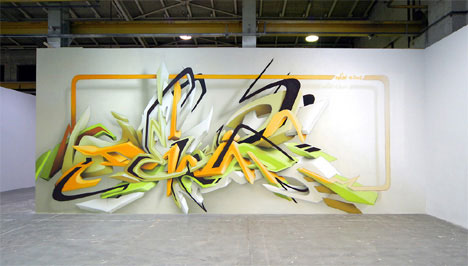 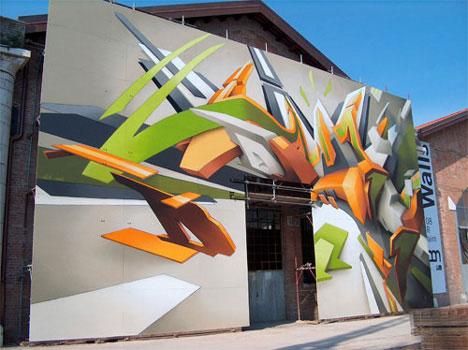 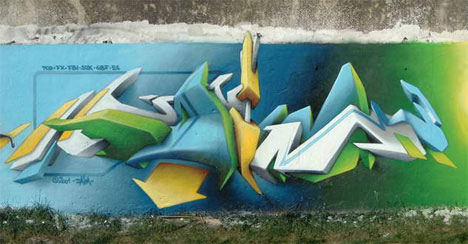 Daim is a German graffiti artist who first started spraying in 1989 and hasn’t stopped since. Daim has become one of the most sought-after graffiti artists in the world, and has even appeared in the Guinness Book of World Records for spraying the highest graffiti in the world. The only “traditional” graffiti artist on our list, Daim creates 3D art on interior and exterior walls, canvas and vehicles and also works in animation and sculpture.