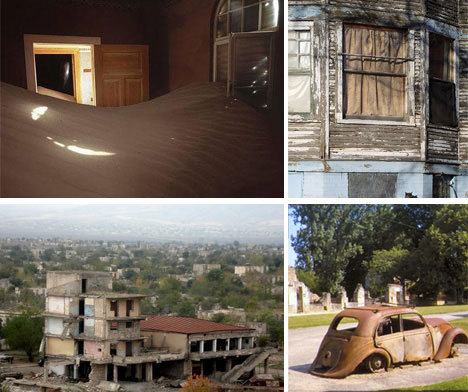 There are many reasons why cities are abandoned; some, like the ghost towns of the American West, have become tourist destinations while others have been condemned or simply forgotten. These 20 abandoned cities of the world share an eerie, haunted quality that is part of what makes them so fascinating. For more amazing abandoned places by region visit the WebUrbanist abandonments archive. For more deserted towns and other derelict places check out our collection of 100+ Abandoned Buildings, Places and Property. 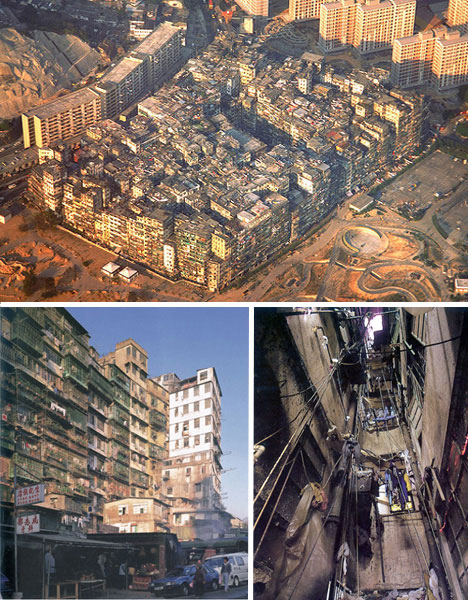 1. The Kowloon Walled City was located just outside Hong Kong, China during British rule. A former watchpost to protect the area against pirates, it was occupied by Japan during World War II and subsequently taken over by squatters after Japan’s surrender. Neither Britain nor China wanted responsibility for it, so it became its own lawless city.

Its population flourished for decades, with residents building labyrinthine corridors above the street level, which was clogged with trash. The buildings grew so tall that sunlight couldn’t reach the bottom levels and the entire city had to be illuminated with fluorescent lights. It was a place where brothels, casinos, opium dens, cocaine parlors, food courts serving dog meat and secret factories ran unmolested by authorities. It was finally torn down in 1993 after a mutual decision was made by British and Chinese authorities, who had finally grown wary of the unsanitary, anarchic city and its out-of-control population. 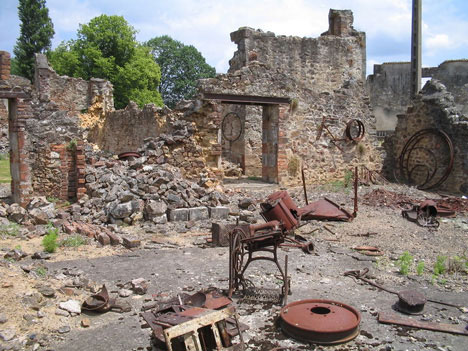 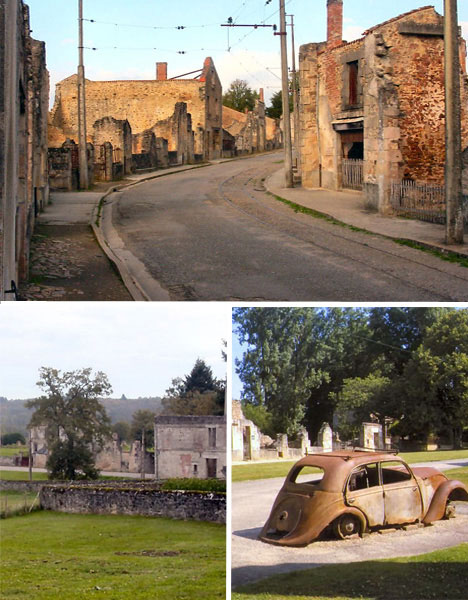 2. The small village of Oradour-sur-Glane, France, is the setting of unspeakable horror. During World War II, 642 residents were massacred by German soldiers as punishment for the French Resistance. The Germans had initially intended to target nearby Oradour-sur-Vayres and mistakenly invaded Oradour-sur-Glane on June 10th 1944. According to a survivor’s account, the men were herded into barns where they were shot in the legs so they would die more slowly. The women and children, who had been held in a church, all perished when their attempt to escape was met by machine-gun fire. The village was razed by the Germans afterward. Its ruins still stand today as a memorial to the dead and a reminder of the events that took place. 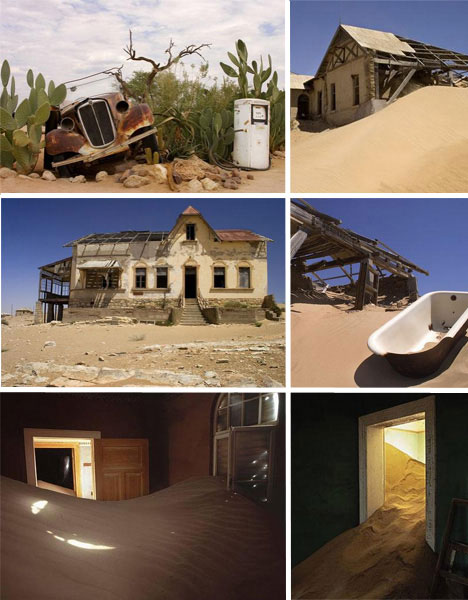 3. Kolmanskop is a small town located a few miles inland from the port of Laderitz in Namibia. Windswept sand has made its way into nearly every building in the town, which was once a diamond mining town and abandoned in 1956 as diamond demand declined and richer sources of diamonds were discovered in other areas. Its only residents are now birds, hyenas and other animals. 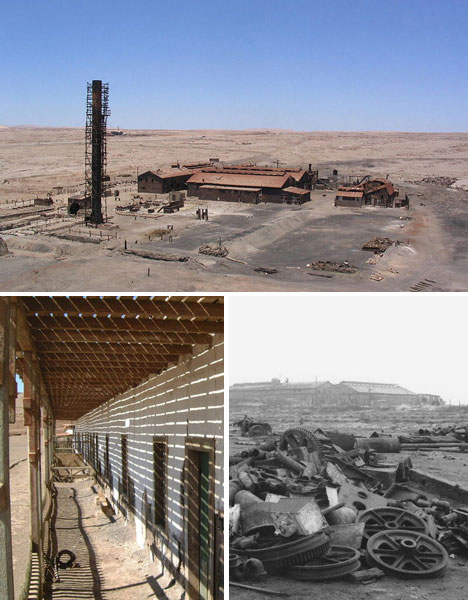 4. Humberstone, Chile was a booming town from the 1920s until the early 40s, enjoying the wealth and prosperity that came from mining and processing nitrate, also known as saltpeter. Once synthetic saltpeter was invented, the town began to decline and experienced a slow outpouring of residents until it finally lay empty in 1961. Since then, the blowing sand from surrounding deserts has made its way into the remaining buildings, which still house machinery and furniture. The town has been named a World Heritage Site and will likely be preserved as a historical monument. 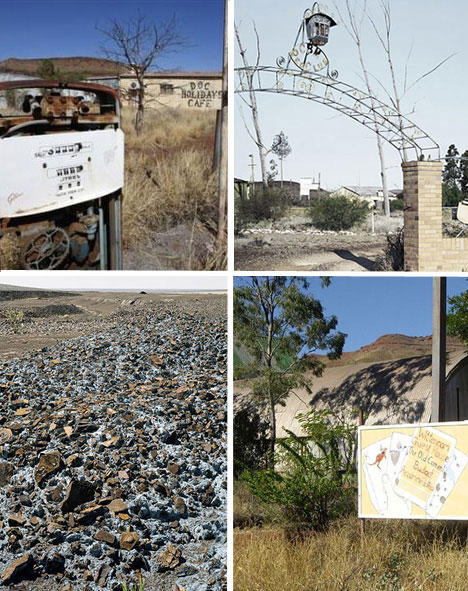 5. Wittenoom, Australia was once home to 20,000 people in its mining heyday. The asbestos mining town effectively shut down after the health risks of asbestos became clear in the 60s, and 1,000 residents died of asbestos-related illnesses. The remaining residents left, aside from the 8 people who still live there today. The city is littered with the blue fibers of asbestos, which can be seen in the bottom left photo above. 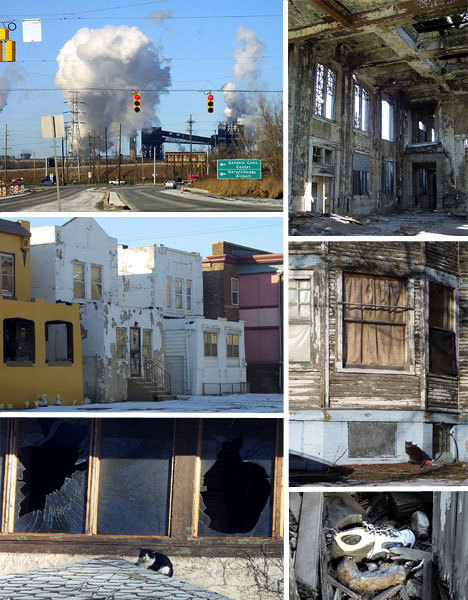 6. Only 30 minutes from the south side of Chicago lies Gary, Indiana, established as a company town for U.S. Steel in 1906. When the steel industry took a downturn in the 60s, the town became depressed and has never recovered. Gary, which has oft received the dubious honor of the murder capital of the U.S., is beginning to see signs of revitalization and is still home to thousands of people, but by the looks of its downtown area you’d never know it. 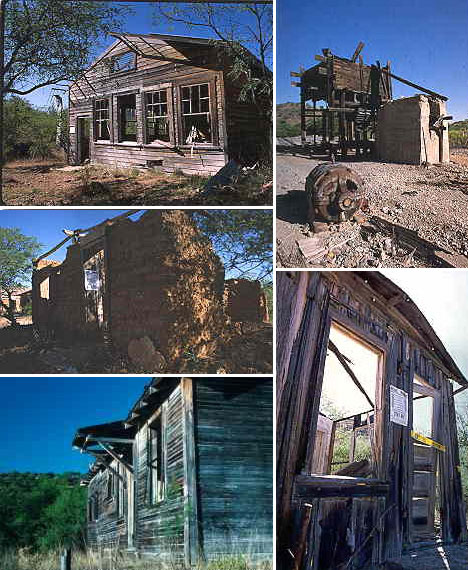 7. Ruby, Arizona is one of the best preserved ghost towns in Arizona, but you can only gain access to it by helping in the restoration effort. It was founded as a mining camp, producing mostly copper, lead and zinc. At its peak in the mid 30s, Ruby’s population reached 1,200. The population diminished after the mine was closed in the 50s. The few buildings that remain include the jail, a schoolhouse, mine offices and a handful of homes. 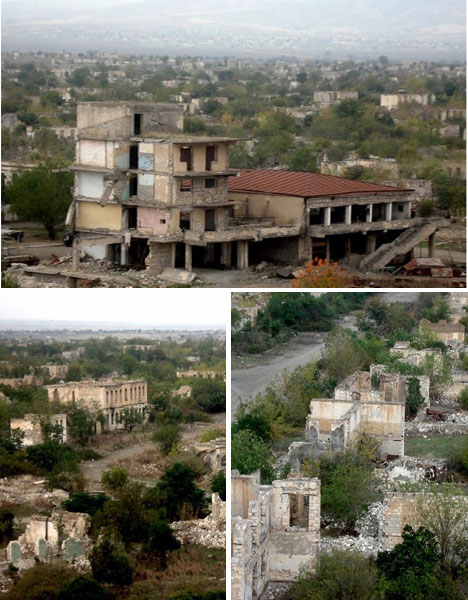 8. The eerie city of Agdam, Azerbaijan was once a thriving city of 150,000 people. It was lost in 1993 during the Nagorno Karabakh war; though the city was never the setting of combat, it fell victim to vandalism while occupied by Armenians. The buildings are gutted and empty, with only the graffiti-covered mosque remaining intact. Agdam residents have moved to other areas of Azerbaijan, as well as into Iran. 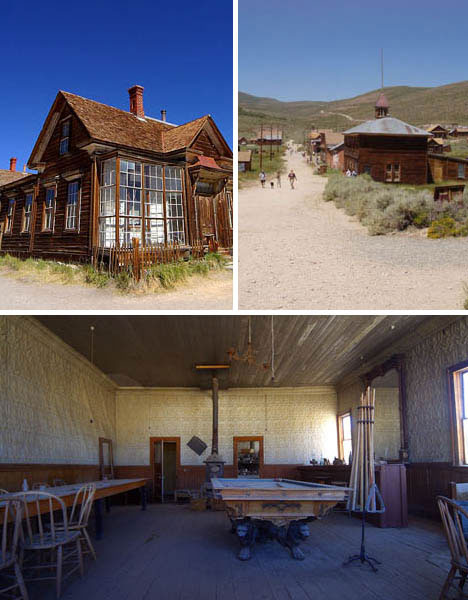 9. Bodie State Historic Park in California is one of the many gold-mining ghost towns in the American West. The town of Bodie once had 10,000 residents during the gold rush; the last of its residents left during the 50s and 60s. Only a small part of the town still stands today, but what remains has been well preserved. Interiors remain as they were when Bodie became a National Historic Site in 1962, with goods stacked on the shelves. Bodie is now frequented by tourists, but its ghost town atmosphere is intact – there are no commercial facilities in the area. 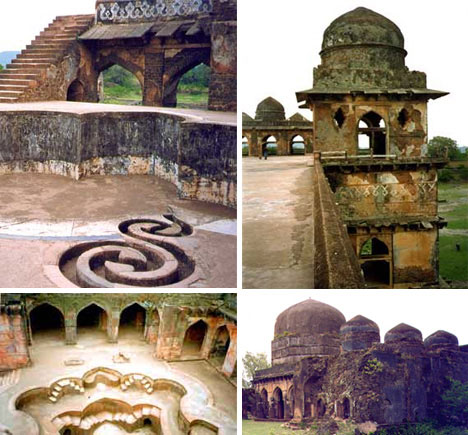 10. Located south of Indore in the state of Madhya Pradesh, Mandu was once the capital city of a northern Indian Muslim state and has lain abandoned for over 400 years. The ancient city takes up a large plateau just above the Narmada River and is home to a dazzling array of ruins, including a royal palace and a mosque. The Nil Kanth Palace is an important pilgrimage point for devotees of the Hindu goddess Shiva. Today, the city’s only residents are gypsy tribes who live on the hilltop plateau.