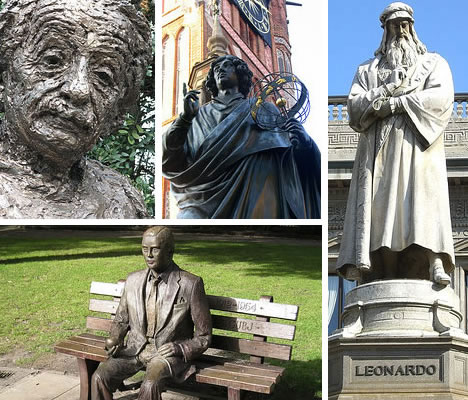 Scientists are the reason we are able to power the lights in our homes or to connect with people hundreds or thousands of miles away. Some of them were real geeks or strange, quirky and eccentric people but they were also extremely brilliant and their discoveries form the basis of many of our modern technologies. Here are ten monuments dedicated to remarkable men of science that have changed our lives. 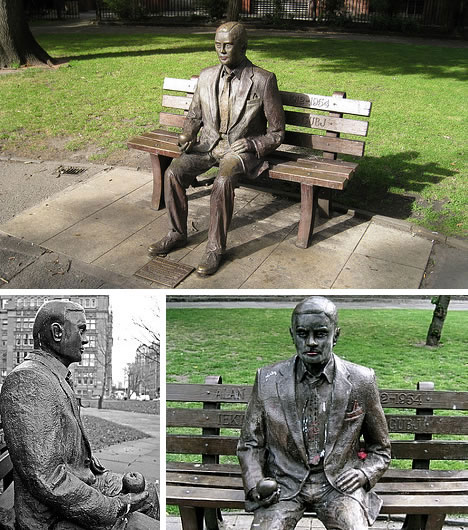 English mathematician, logician and cryptographer, Alan Turing is famous for being the father of modern computer science. Turing’s greatest impact on our daily life was his work at Bletchley Park, the UK’s codebreaking centre, where he contributed to crack the Enigma code used by the Germans during World War II. It was considered decisive for defeating the Third Reich.

He also worked on the design of the ACE (Automatic Computing Engine) and presented a paper on 19 February 1946, which was the first complete design of a stored-program computer in the UK. Another area that Alan Turing researched and got very interested in was artificial intelligence. He proposed an experiment, the famous Turing test, an attempt to define a “sentient” computer. He thought a computer can think. Turing also helped build one of the first working computers in the world – the Mark 1 in 1949.

His memorial, situated in the Sackville Park in Manchester, England, was unveiled on June 23 (Turing’s birthday) in 2001. It faces Alan sitting on a bench with an apple in his hand. It’s the classical symbol of forbidden love and the fruit of the tree of knowledge. It also represents the way Alan Turing died : he ate a cyanide-laced apple. 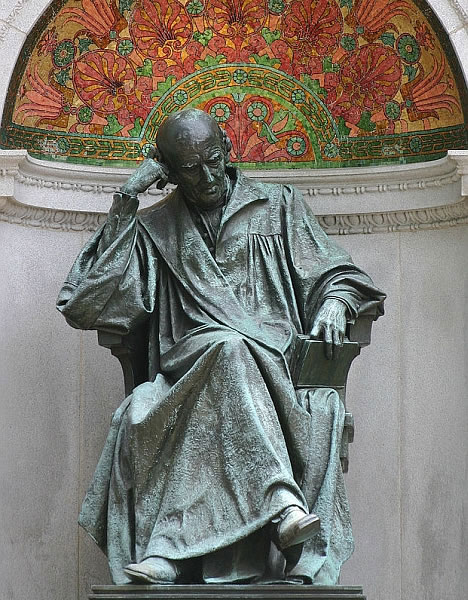 An advocate of homeopathic medicine (the Father of Homeopathy), Samuel Hahnemann believed patients benefited from much smaller doses of drugs than were customarily prescribed. He is also the first in the world to use the magnet therapy. Using north and south pole magnets, he prepared three medicines by exposing milk and water to the magnetic force and found that he could treat 1243 symptoms in aiding recovery of diseases. During those times most pharmacists and doctors were against his ideas, mainly because they wanted to profit from the sale and administration of drugs.

In the northwest quadrant of Washington DC, located on Scott Circle, the monument was supported by the growing homeopathic community with individuals donating as little as $0.25. It’s a curvilinear memorial that features the bronze likeness of Hahnemann in the center under a domed, glazed mosaic composed of foliage and flower of the cinchona plant. 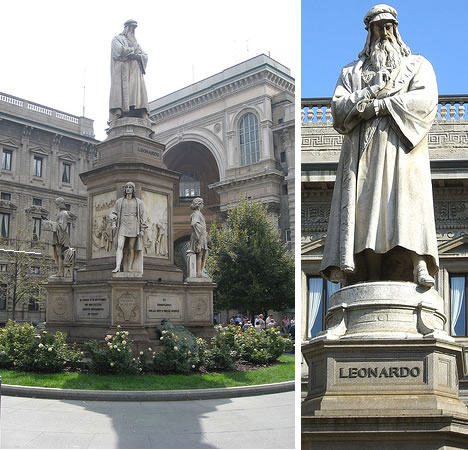 Leonardo di ser Piero da Vinci, or shorter Leonardo da Vinci was an Italian polymath. Though he is mainly known as a great painter and sculptor, his knowledge and skills allowed him to be one of the best scientists, mathematicians, engineers, inventors, anatomists, architects, botanists, musicians and writers in the world. Trying to envision what the future holds, Leonardo’s ideas were vastly ahead of his time. Though his concepts were not feasible back then, he was able to visually represent the way a helicopter and a tank should look, considered a calculator, solar energy, and outlined a rudimentary theory of plate tectonics.

Anatomy, civil engineering, optics and hydrodynamics all fascinated Leonardo da Vinci. Other of his inventions include musical instruments, hydraulic pumps, reversible crank mechanisms, finned mortar shells, a steam cannon and so many more.

Traveling to Milan will most likely get you to Piazza della Scala (here’s the most famous opera house in the world, La Scala) where you can see the noble monument in marble, that was erected in 1872 to the memory of that immortal artist of the Renaissance, Leonardo da Vinci. 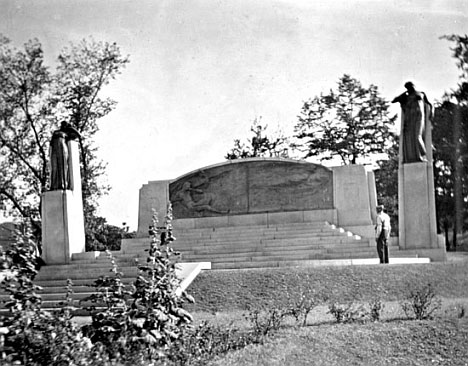 An eminent scientist, inventor and innovator, credited with the invention of the telephone, Alexander Graham Bell was born on 3 March 1847. With a father and grandfather that have worked on elocution and speech, and with a deaf wife and mother, Bell was influenced into developing all sorts of hearing devices. In 1876, at the age of 29, he invented his telephone and a year later started the Bell Telephone Company. Can you imagine life without this discovery?

Another great innovation after the telephone was the “photophone,” a device that enabled sound to be transmitted on a beam of light. Along with all these interests, Bell invested a lot of time and effort to challenge flight and after forming the Aerial Experiment Association, they managed to build four powered aircrafts by 1909. The best was the Silver Dart.

The Bell Memorial on West Street in Brantford, Ontario, was unveiled in 1917 and was dedicated to Alexander Graham Bell, who has been present at the ceremony. 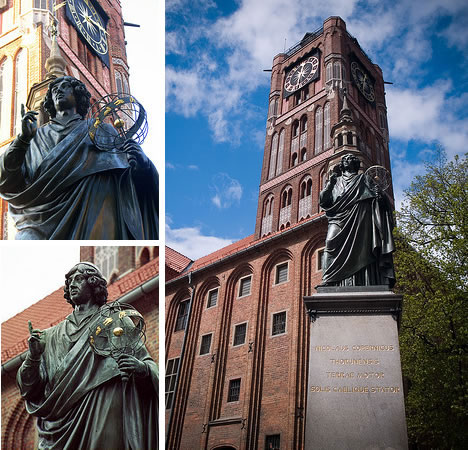 Born in Torun, Poland on February 19, 1473, Nicolaus Copernicus (the Father of Modern Astronomy) is the first astronomer to postulate a scientifically based heliocentric theory in opposition with Aristotle’s and Ptolemy’s, geocentric system. He explained that the Earth and all other planets revolve around the Sun and that the Earth, just like other planets, rotates around its axis. His ideas became landmarks in the history of modern science that is known as the Copernican Revolution.

In 1853 a sculptor from Berlin, Friedrich Abraham Tieck, commissioned by the German Copernican Society, worked to build the statue of Nicholas Copernicus in the Old Market square of Torun in front of the Old Town Hall. It’s one of the main attractions of the city. 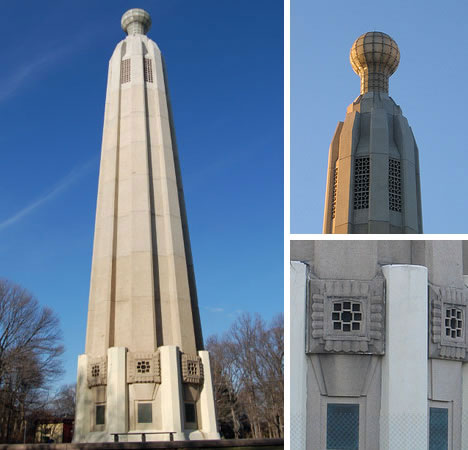 Apart from being a great businessman, Thomas Edison was an inventor that developed many devices and gadgets that really changed people’s lives, like the phonograph (1877) and the long lasting light bulb. Holding 1,093 U.S. patents in his name (more if you count other countries) Edison is the first inventor to come up with the “mass production” model, and renowned for his major innovation: the first industrial research lab which was built in Menlo Park, New Jersey.

The Thomas Alva Edison Memorial Tower and Museum, also known as the Menlo Park Museum was built in 1938 on the same grounds where Edison had his laboratory, the first modern Research and Development center in the world. It was dedicated on February 11, 1938, on the inventor’s 91st birthday as a tribute to the incandescent light and recorded sound. The museum showcases many of Thomas Edison’s creations and inventions so don’t miss it if you’re there. It’s a great experience. 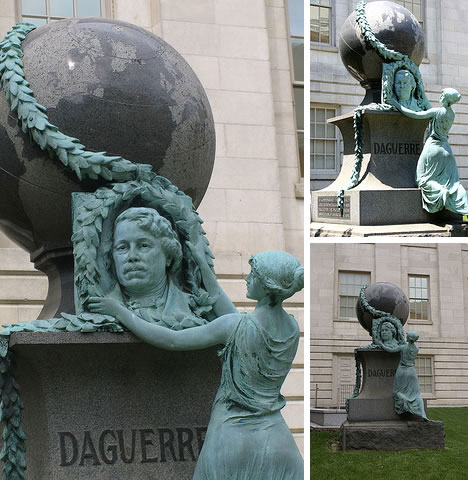 Born in Cormeilles-en-Parisis, France on November 18, 1787, Louis Daguerre is perhaps one of the several famous people who invented photography. He started as an apprentice architect, he did theater design, panoramic painting and he also supplied the scenic and lighting effects for a number of operas in theaters in Paris. Daguerre is also famous for inventing the Diorama, which first opened in July 1822 in Paris, and for the daguerreotype process of photography – the Polaroid of the day, producing a single image which was not reproducible.

The statue was raised by the Photographers Association of America and originally stood in the National Museum and later moved to Gallery Place (F Street & 7th) and rededicated to Louis Daguerre in 1989 in commemoration of 150 years of photography. 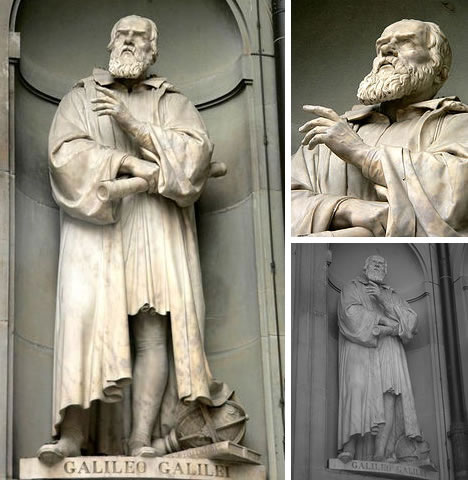 Born on 15 February 1564, in Tuscany, Italy, Galileo Galilei is considered “the Father of Modern Science”, “the father of science”, the father of physics” or “father of modern observational astronomy”. He was a physicist, mathematician, astronomer, and philosopher, that supported Copernicanism, discovered the importance of acceleration, and established the law of parabolic motion. He also invented the refracting telescope and used it to make astronomical observations which include discovering the four largest satellites of Jupiter.

Though many of his theories put forth have been disproved, his name is nevertheless justly associated with the vast extension of the bounds of the visible universe and the modern astronomy.

To commemorate Galileo’s first recorded astronomical observations using a telescope, the United Nations proposed 2009 to be the International Year of Astronomy.

The Uffizi Gallery in Florence houses one of richest and most important art collections in the world. If you’re looking for Galileo Galilei’s statues, it’s there. 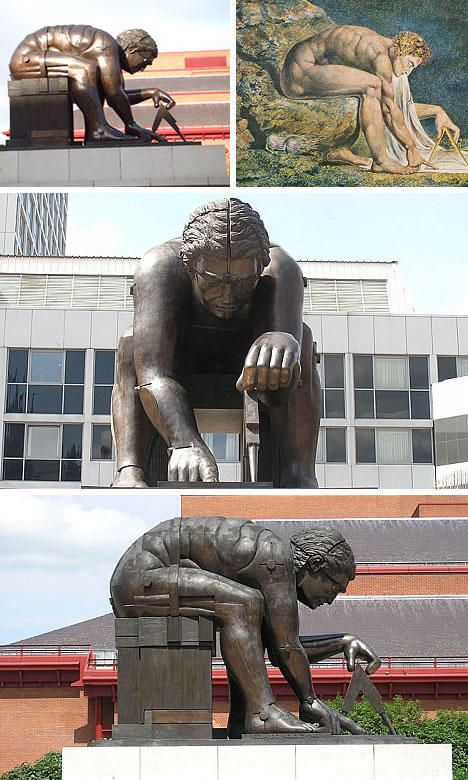 Sir Isaac Newton is an English physicist, mathematician, astronomer, natural philosopher, alchemist and theologian, famous for postulating the mathematical principles of natural philosophy (also known as Principia Mathematica) published on on July 5, 1687. Some say that remains the most influential book in the history of science.

Newton is also renowned for enunciating the principles of conservation of momentum and angular momentum, inventing the reflecting telescope and for formulating an empirical law of cooling. He was also very attracted to the study of the speed of sound and its implications.

To formulate his physical theories, Newton had developed (shares credit with Gottfried Leibniz) a field of mathematics known as calculus. As a mathematician he also demonstrated the generalized binomial theorem, developed the so-called “Newton’s method” for approximating the zeroes of a function, and contributed to the study of power series.

The 4 m tall bronze statue – a naked Newton that interrogates the geometries of the universe with his dividers – was commissioned for the new British Library in 1995, and stands in the piazza near Euston Road. It was created by Sir Eduardo Paolozzi and was based on a 1795 engraving by William Blake. 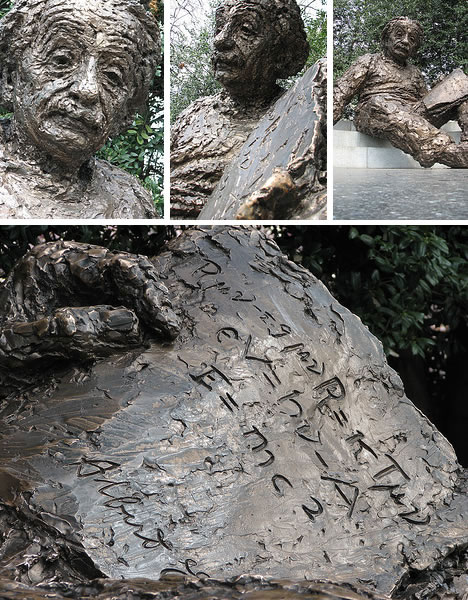 No list would be complete, unless we’d have the genius on it, Albert Einstein. Best known for the theory of relativity and the mass-energy equivalence law, he was named the “Person of the Century” by Time Magazine in 1999. Introduced to science and mathematics when he was only 10 years old after getting Euclid’s Elements book, it only took him 2 years to learn Euclidean geometry and from here to investigating calculus, was just a small step.

Because of his expressive face and distinctive hairstyle, Einstein has been a favorite model for depictions of mad scientists and absent-minded professors. However, his name is now associated with great intelligence.

On the grounds of the National Academy of Sciences, a monumental bronze statue of Einstein, seated and with manuscript papers in hand, this is one of the most popular monuments in Washington. If you happen to visit, don’t worry: no one will yell at you if you want a picture in Einstein’s lap.