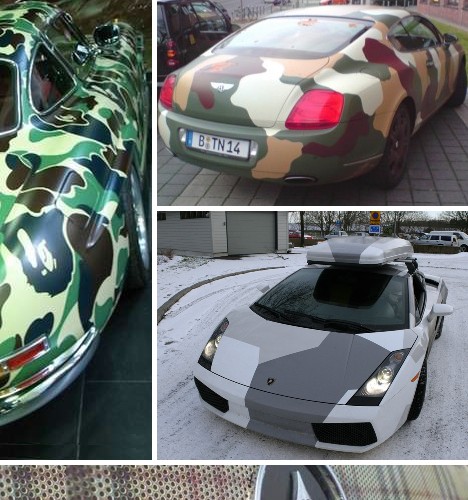 If the point of driving a supercar is to be seen to best advantage, then the owners of these 10 camouflaged ultimate automobiles are doing it wrong. Then again, “stealth” is a relative term – and one of the best ways to stand out from the crowd is to blend right in. 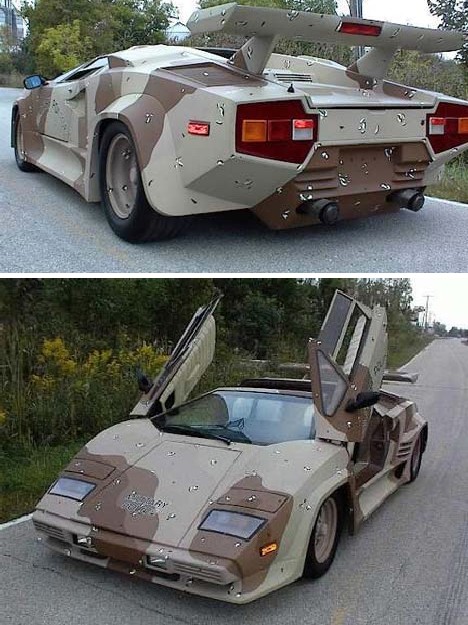 Supercars like the Lamborghini Countach often take their styling cues from cutting edge military vehicles, including fighter jet aircraft. With that in mind, camouflage paint jobs aren’t all that odd and may even improve the looks of some cars in the minds of some onlookers. Beauty is in the eye of the beholder, of course, but when the car in question is a Countach it’s hard to make it look anything but gorgeous. 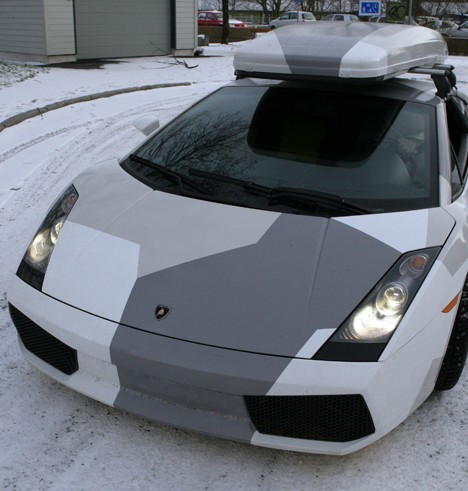 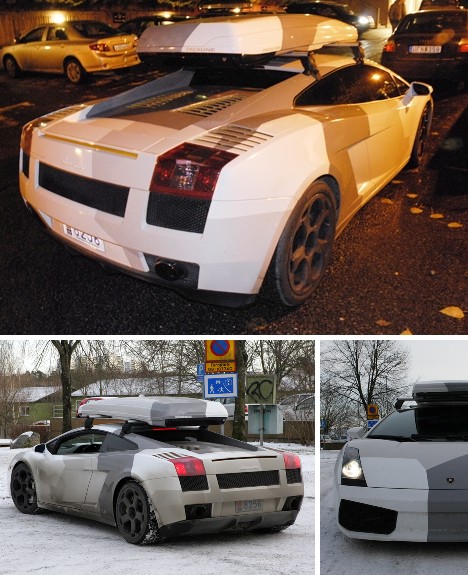 This Lamborghini Gallardo comes from Sweden and its camo paint job helps it meld with the prevailing shades of a typical Scandinavian winter. One would hope the owner (Swedish pro skier Jon Olsson) respects the road conditions in winter solstice Sweden or his ride may meld a little more than he would like. The matching roof box is a nice touch by the way – it may not do much for the Gallardo’s aerodynamic profile but where else are you going to stow the skis? 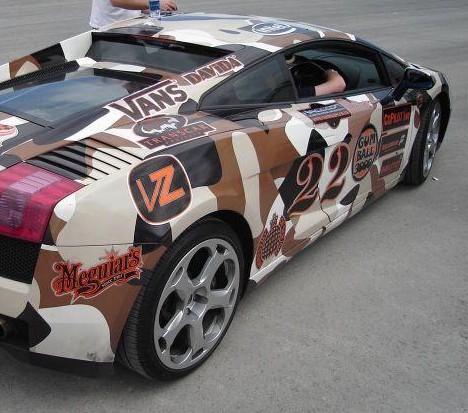 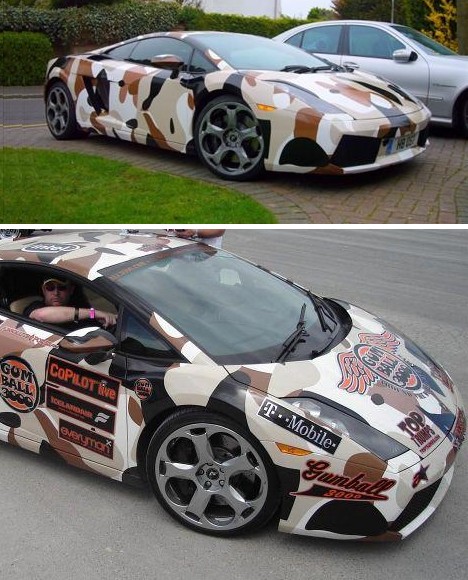 (images via: CarPictures and Autoblog)

Here’s another Lamborghini Gallardo, this time dressed to kill for the 2004 Gumball 3000. This Rambo Lambo was back for the 2006 edition of the race (center, above) but is shown without the sponsor ad stickers – definitely a cleaner look. 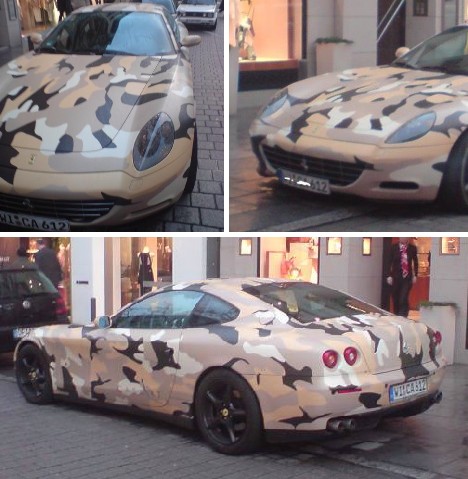 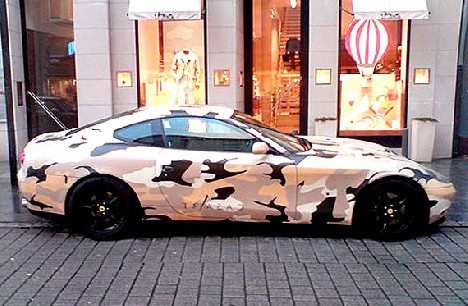 A real estate agent in Wiesbaden, Germany, must be doing very well in a down housing market to be driving a late-model Ferrari 612 Scaglietti. Then again, when one’s income depends on commissions it doesn’t pay to display conspicuous consumption. The answer? Give your ride the vinyl wrap treatment in delicious Chocolate Chip camo. If this particular Prancing Horse wasn’t General ‘Stormin’ Norman” Schwartzkopf’s Gulf War ride, it damned well should have been. 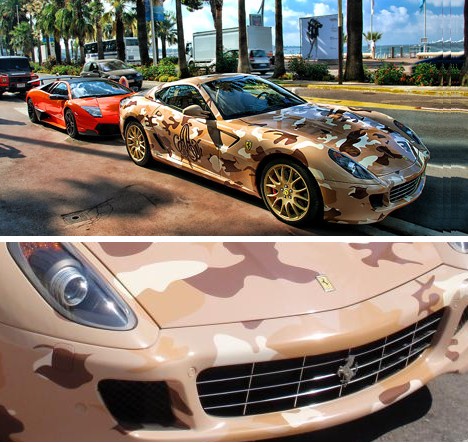 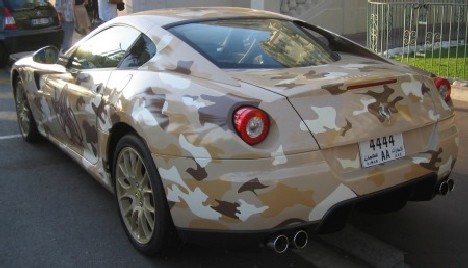 This Ferrari 599 GTB Fiorano was spied while parked on Croisette boulevard in Cannes. The French Riviera town is famous for supercar sightings and the owner of the fine Fiorano above was evidently looking to avoid the paparazzi. He did – his car, not so much. 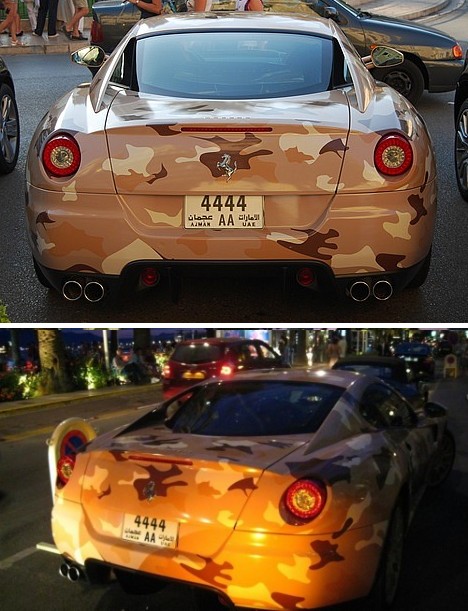 (images via: Travelpod and News-Luxe)

Two more views of the desert camo Ferrari 599 GTB Fiorano showing its “four 4’s” license plate which indicate registration in the United Arab Emirates. No surprise there, really, but this begs the question: did the owner drive it all the way to Cannes? 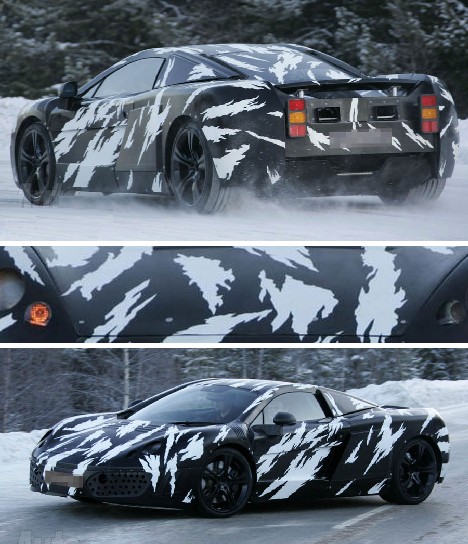 Camouflage paint or wraps aren’t always the choice of the customer, often camo is used by manufacturers who need to test their offerings in the real world yet don’t want to let the cat out of the bag before official introduction. One of the nicest pre-release camo cloaks belongs to the McLaren P11, seen above undergoing cold-weather testing in Sweden. 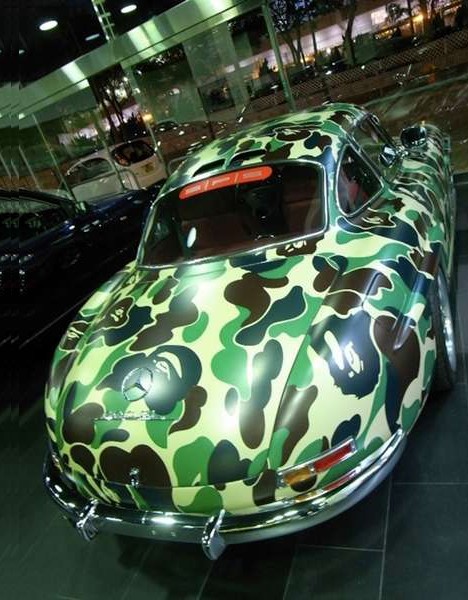 (images via: Sandman Files and Trendhunter)

While most camouflage is used with the intent to foster stealth, this classic Mercedes 300SL gullwing coupe displays all the subtlety of an electrocuted bullfrog. Then again, the garish gullwing ‘s gaudy glow comes courtesy of Nigo, owner of Japanese clothing brand A Bathing Ape. Much criticism has been directed at Nigo for this and other, even weirder creations but historians seem to be the ones most offended. Automotive purists revere 300SL’s like this 1955 coupe as one of the most beautiful cars ever designed, so wrapping one in camo is, for them, tantamount to sacrilege. 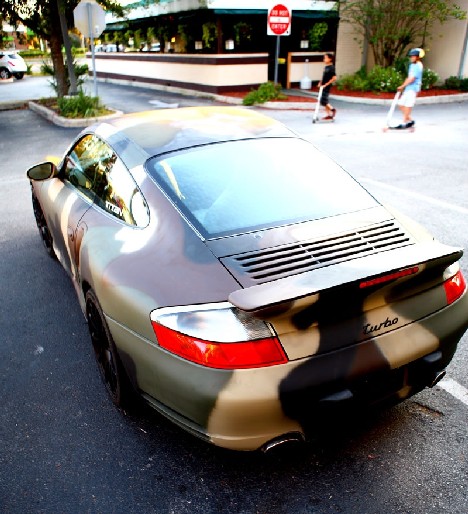 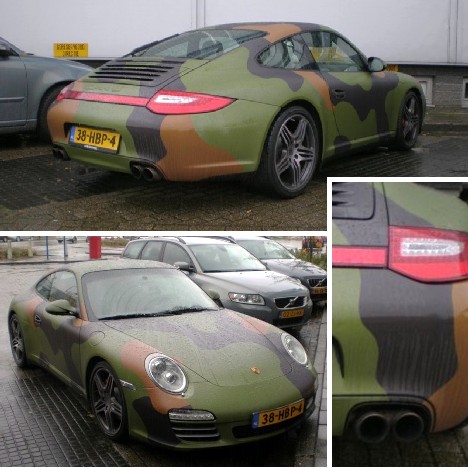 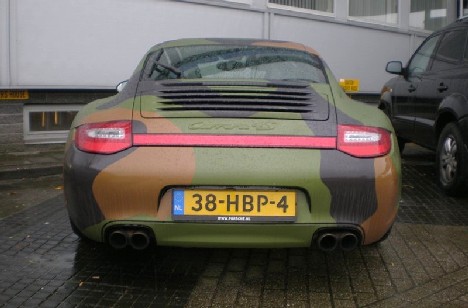 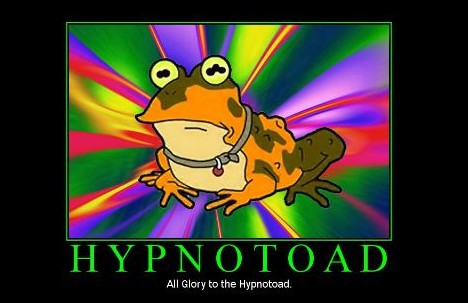 (images via: Web Wombat and Billy The Fish)

German vehicles in camouflage… no, it’s not the trailer from The Longest Day, just a few hobbyists seeking to conjure up a little Sturm und Drang for their civilian cruisers. Curiously enough, camo Porsches like the 997-Type Porsche 911 Carrera 4S above, center, are relatively common though the effect is more Hypnotoad than hypnotizing. 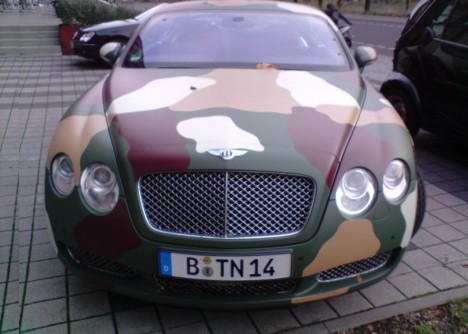 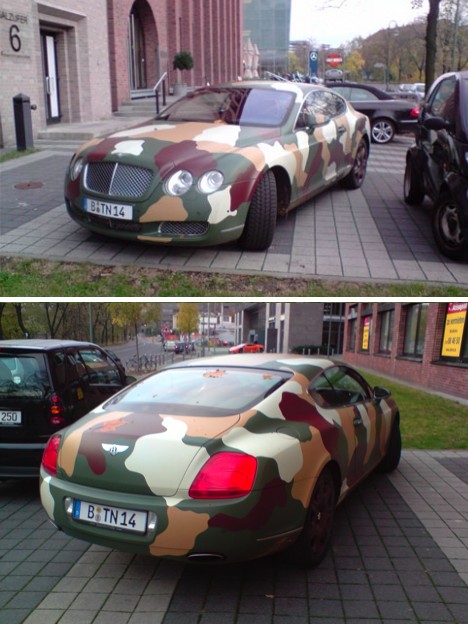 Conservative, classy, traditional… they go with Bentley like tea with crumpets. Just the excuse to turn the tables and bring forth the Bentley Continental GT camouflage edition. Sporting a somewhat unsubtle camo scheme that probably looked a lot better on a Hawker Hurricane, this battle-ready Bentley was snapped on the streets of Berlin. No word on if the camera’s lens survived the encounter intact. 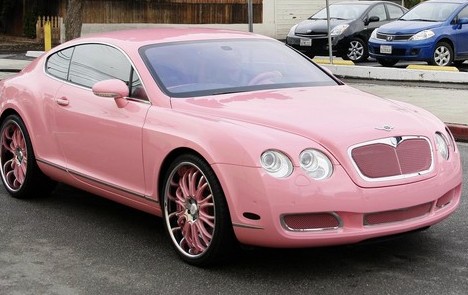 Don’t like the look of the camo Bentley? Count your blessings because there are worse fates suffered by the stately English make: such as the cotton candy catastrophe above. Who would be rich & tasteless enough to commission, buy and drive a pink Bentley? If you answered Paris Hilton, step up and collect your prize… and form a line to the right, everyone. 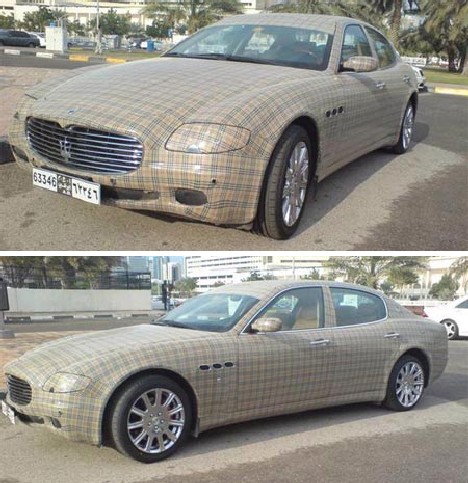 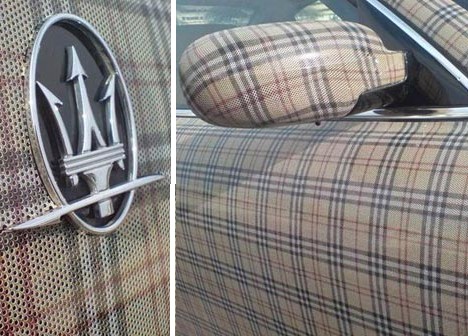 Good Lord, they’ve gone to plaid! Last and least, we give you the Burberry Maserati, just the thing for stealthy shoppers with low taste on the prowl for high-end luxury goods. Though it may not be a classic camouflage pattern, the well-known Burberry tartan can be considered a form of urban camouflage made possible by the advent of CAD vinyl wraps – what, you thought somebody (with OCD) actually painted their Maserati Quattroporte to look like this?

Camouflaged supercars seem to be the coming thing, which bodes well (or unwell, depending on your point of view) for everyday drivers who want their rides to stand out from the rest of the herd. Do you see a pattern here?