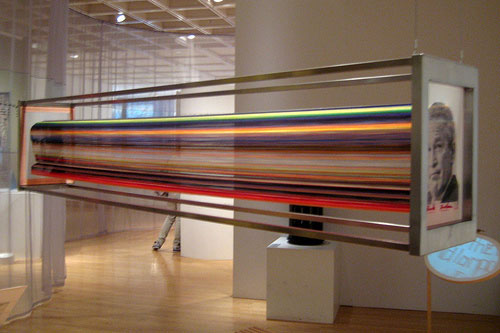 George W. Bush is arguably the most controversial person in the world. Whether you love him or hate him, he is clearly one of the most influential figures in modern history (we’ll leave the politics of that influence up to you). And nowhere has his influence been displayed more than in the world of art. From the streets of Sydney to the museums of New York, President Bush has inspired an awakening in many artists. An awakening to the realization that art can and should be used to express their right to free speech, whether for or against him. Amateurs and professionals alike have begun once again to use art as a persuasive means of mass communication, rather than just a self-serving means to an end. In saying that, enjoy this list of art inspired by the lame duck leader of the free world himself, George W. Bush. 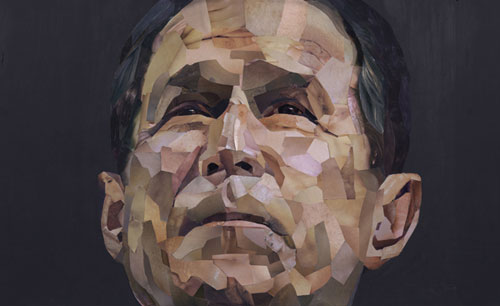 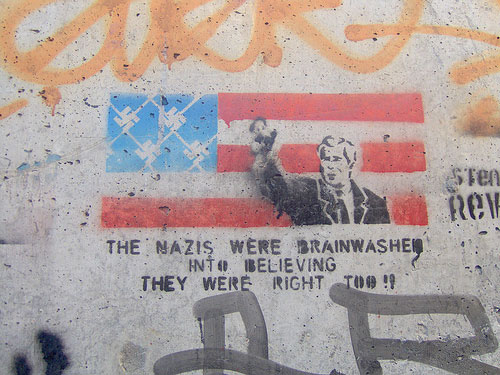 It is amazing to understand the weight and impact an American president can have on a country abroad. This stencil was created by an unknown artist, and resides on the side of a building in the Fitzroy district of Melbourne, Australia. Stenciling has become a popular way for street artists to create their pieces in less time. Regardless of the time it takes to create art like this, the impact is no less influential in the message and meaning the work conveys. 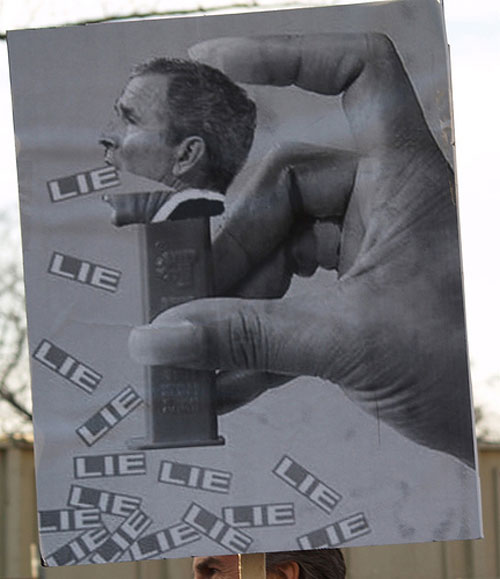 Whereverin the world George Bush goes, a protest will be there, and his hometown is no exception. This piece was created using home printed materials, magazine cutouts, wheat paste and cardboard. The message in this sign is simple, but the juxtaposition of using a culturally relevant icon as the conduit for the president’s message is where this protest piece becomes unique. 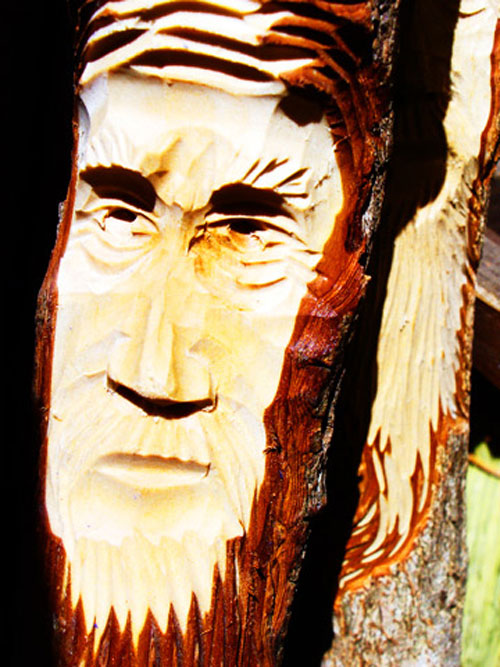 This is the type of art you find on the side of the road driving through Arkansas. The time it must have took to perfect the skill of carving wood using a chainsaw is no less difficult than the time it takes to learn how to paint on canvas. Also, it is respectable when artists use found objects to create their works, and Arkansas is no exception. 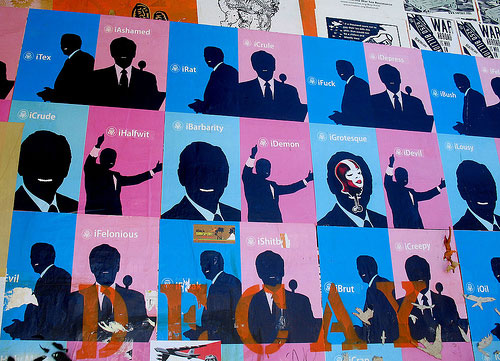 San Francisco is arguably the most beautiful city on the west coast, and not only is this city known for its beauty, but also its heavy concentration of self-important people.Regardless of the self-importance, San Francisco is a great place to admire artistic expression.This piece was created using screen printed posters and wheat paste, there is also a spray-painted message that was stenciled on the bottom of this piece that was later added by a different artist. If you are in the area, this work of art is now available to be seen at the cross streets of Valencia and 23rd in the heart of the Mission District. 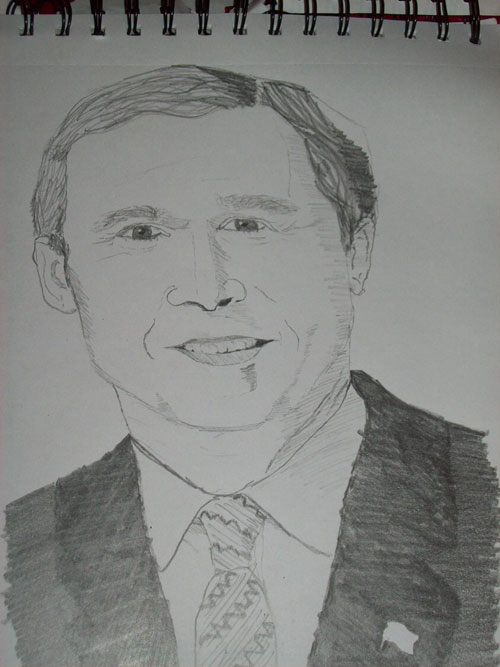 A simple drawing of a simple man.One can’t help but think the admiration that must have taken place while spending the time creating this pencil drawing. I can’t help but wonder where the inspiration came from for this piece. No matter where it came from, this artist felt it necessary to post this on her flickr page where people gave her high marks for her interpretation of “The Man”. 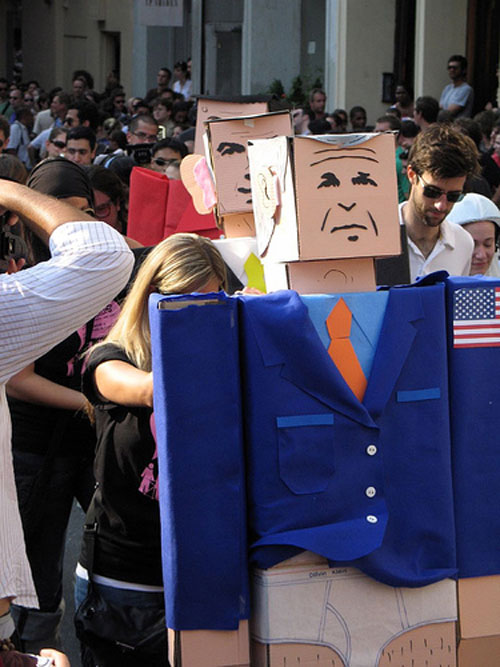 Every year, art supporter and gallery owner Jeffrey Deitch sponsors the Soho art parade. Since 2005, artists have been encouraged to express themselves on the streets of lower Manhattan by creating anti-war effigies. And of course, nothing speaks more anti-war than an effigy of the president in his underwear. This parade pulls its inspiration from the Dadaist parade movements of the early 20th century. Dadaism is a cultural movement that began in Zurich, Switzerland, which paraded art from all disciplines in the streets and concentrated its message on being anti-war.

This masterpiece hung in New York’s Museum of Arts and Design from November 8, 2007 to April 27, 2008, and was created by master embroider Xiang Yang. The name of Yang’s work is The Truth People Are Not Willing To Face: Bushism vs. Saddamism. This piece combines hand-embroidered silk thread with silkscreen printed end pieces, all of which are enclosed in a stainless steel frame. Xiang Yang’s work often deals with political issues related to power, politics, and personality. Yang sets up a mirror-like image of the two leaders, their faces appearing to morph into each other by way of the connecting threads. Yang explained that this piece represents his that Bush and Saddam share the same core, egoism.

This mural was painted by an unknown artist on the wall of a discotheque called Klub Aurora in Warsaw, Poland. The faces represented in this piece are of some of the most feared leaders in modern history and George W’s mug can be seen to the far right in blue. If you look closely, every world leader represented in this mural has been painted with male parts with the exception of George Bush and Osama Bin Laden, who have female parts. 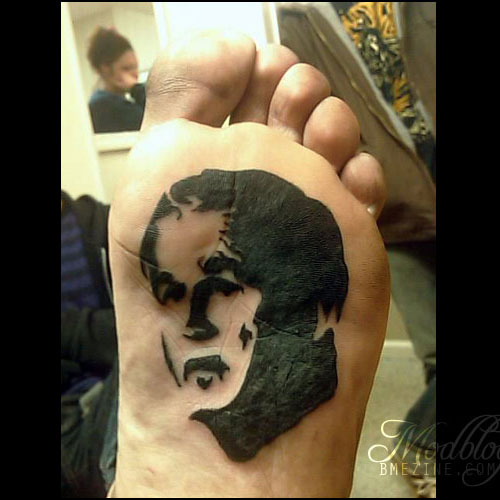 I know the feeling. The feeling that this country is so out of control, and the only thing you can do is get a tattoo that represents your disgust for the current state of the world. The meaning of this tattoo is pretty obvious, and more power to the owner of this piece for their intense commitment, because it must have been uncomfortable to walk on for a couple of days. 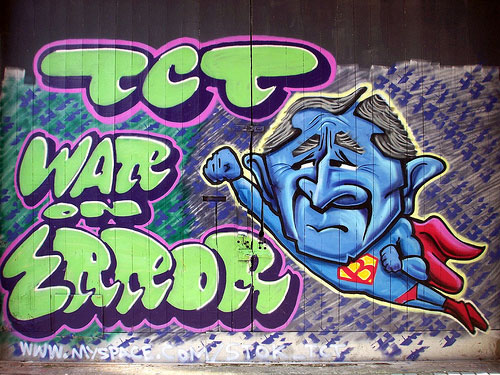 Vandalism? Work of art! The writer who first penciled this in their black book, then scouted the location, and finally completed this masterpiece, worked tirelessly to get his message out. The artist who created this is known on his Myspace page as “stok_tct” and he has many pieces up in and the around the area of Liverpool, England. You can find this piece on the side of an auto shop in downtown Liverpool. This piece was painted over wood using spray cans and paint rollers. Keep up the great work, mate! If you are interested in viewing more of this artist’s work you can visit his Myspace page. 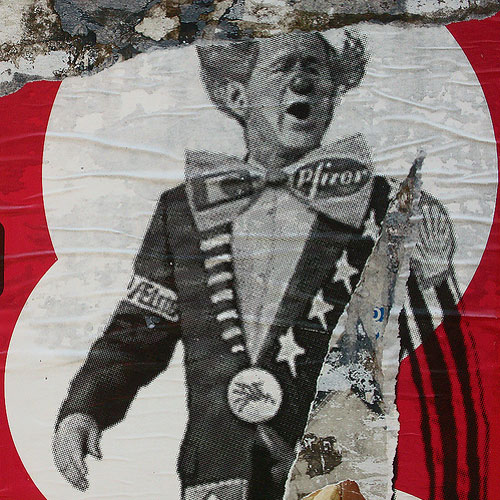 This piece is a picture of a protest poster that was pasted to a wall and torn. It is unknown if this piece was ripped intentionally or if it was torn due to environmental erosion. Regardless the message of this piece is still intact, and the tears out of the original poster almost add to the dramatic effect of the artwork. Not much else is known about this piece except for the person who took the picture and posted it on the internet. Though that is the case, it is still an interesting piece and deserves attention. 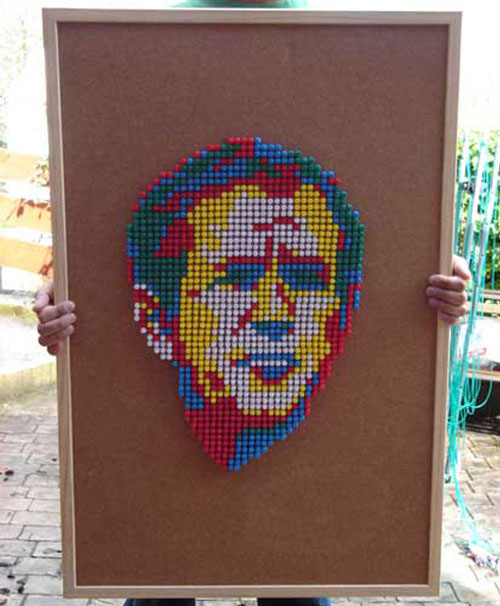 British artist, Melvin Galapon writes on his site that features the George W. Bush Pinhead, “My work is somewhere between art direction, illustration and graphic design.” Whatever genre this piece falls under, one thing is for sure, it sure is different. But different is good, whether or not this idea has been done before, I still applaud this artist’s clever choice of medium for the piece. Galapon’s work was created using different colored push pins on cork board. 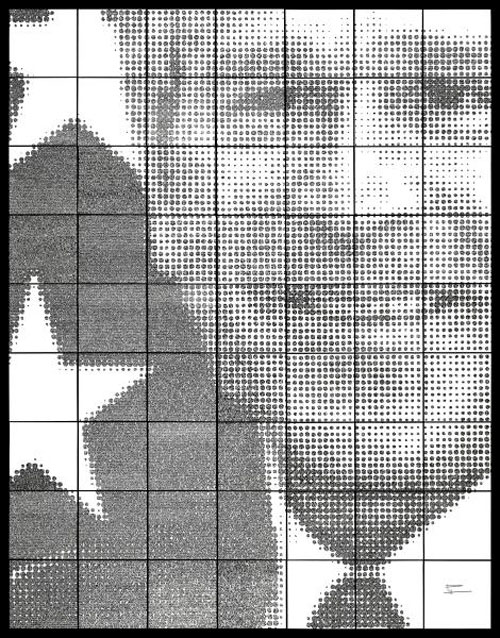 This piece stands 70 x 90 and is the most serious in the list for the very fact that the image was created using the names of Coalition soldiers that have died in the Iraq war as of April 30, 2005. The artist that created this is named Phil Hansen, and he typically does portraits of people using different a variety of very unique materials, including french fry oil, peanut butter and jelly sandwiches and photo copied pages of the bible. 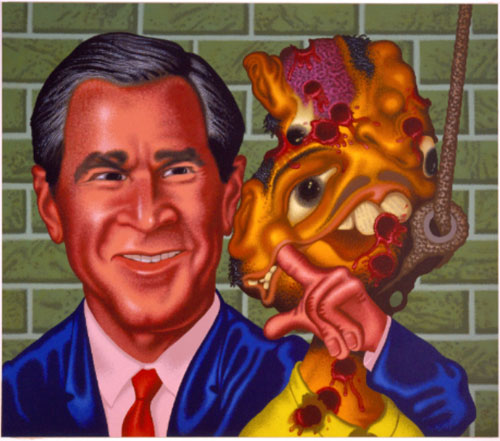 This piece is by master artist Peter Saul and is called George Bush at Abu Ghraib. If it hasn’t already been purchased You can find it hanging in the Leo Koening Gallery in New York. Peter Saul is widely known for pulling inspiration from politics and art history, and has been creating and selling art since the late 1950’s. Peter Saul has been quoted as saying that this piece is supposed to represent the president being the one solely responsible for the mess in Iraq.

Inspiration for artistic expression can come from anywhere at anytime, and the one thing that links these 15 pieces of art together, is the fact that each artist’s inspiration came from one person. Whether that inspiration was guided by disgust, malice or admiration, George W. Bush has proven to be a driving force behind some very creative works of art.