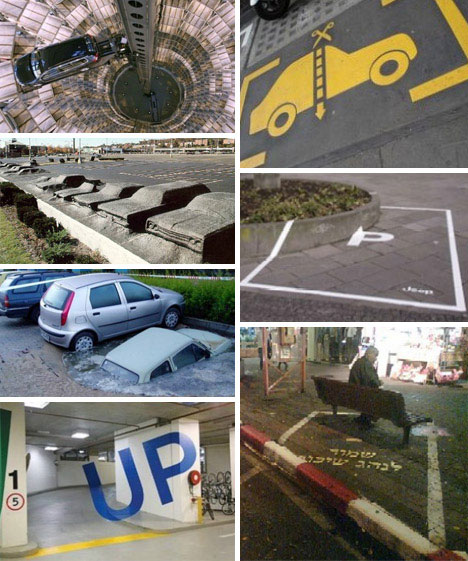 As much as people love to drive, all good things must come to an end: the parking spot. Problem is, the number of cars have grown much faster than the amount of parking space. Something’s gotta give – as seen in these sometimes surprising and eminently enterprising solutions show so well.

CarTowers at the Autostadt: A Hive for Beetles 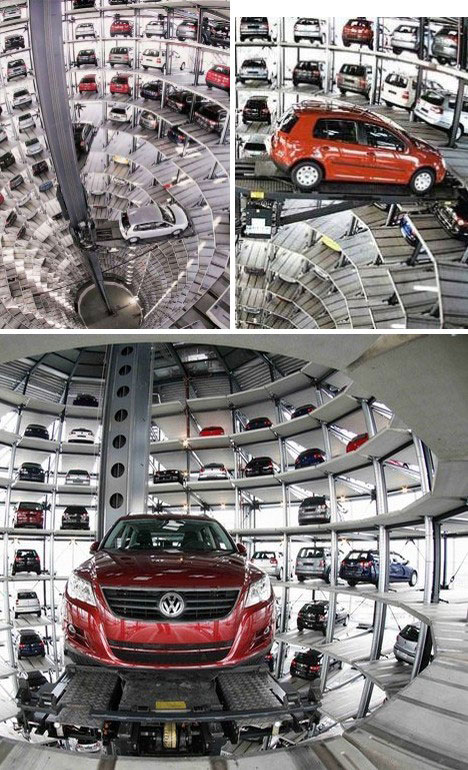 The CarTowers is a 20-story tall car storage tower in Wolfsburg, Germany. It’s owned & operated by Volkswagen, which explains why all the cars – around 800 at full capacity – are VWs. The CarTowers has often been used to illustrate public parking garages of the future even though it’s a private endeavor that merely allows VW to save space. 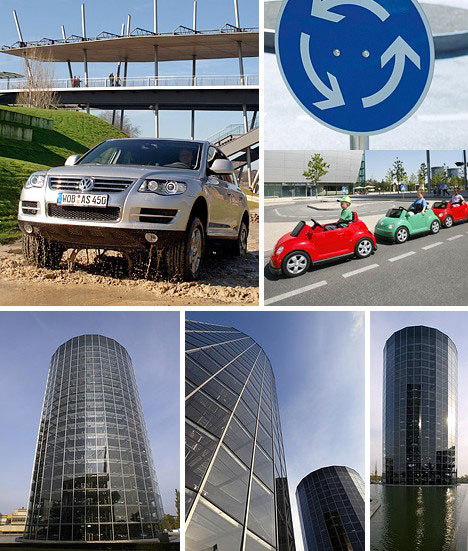 Built of steel and glass, the CarTowers is just one part of the Autostadt, a unique, “Car World” style attraction that includes a variety of car-related attractions. Visitors who fork over a few Euros get to enjoy The TurmFahrt (or CarTower Discovery, though I prefer the German name) and embark on the same trip a shiny new VW takes when slated for a slot in the CarTowers. 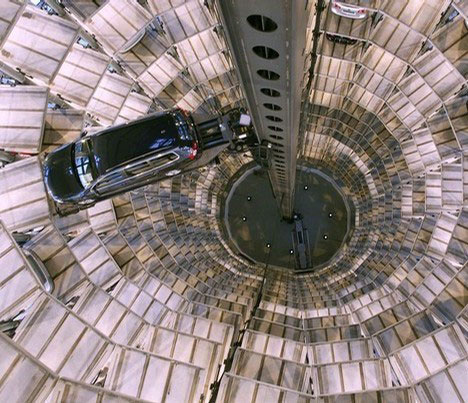 Certainly the footprint left by the CarTowers is much less than that of a standard car park, even multi-level parking garages such as those at airports. Without the winding ramps a tremendous amount of space can be saved. VW’s system should be workable for public lots though the expense may be prohibitive. 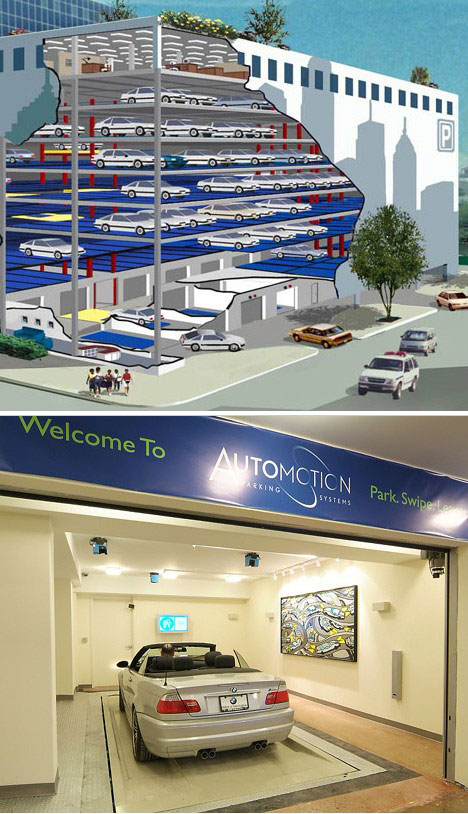 (images via: Parking-Net and MSNBC)

The robotic carpark in Deira, Dubai (above) doesn’t have the storage space of the CarTowers (14 cars instead of 800) but it IS practical, workable and open for business. A 67-car capacity robot carpark in New York’s Chinatown works on the same principal. 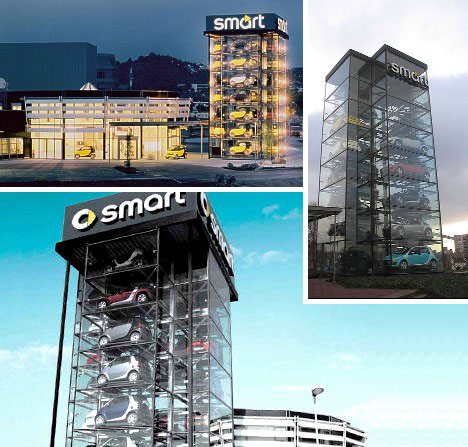 Smart Cars, owned by Mercedes Benz, also have a space-saving storage system for their minuscule models. The see-through storage towers and stacked storage style plays on the “toy car” image Smart Cars have. 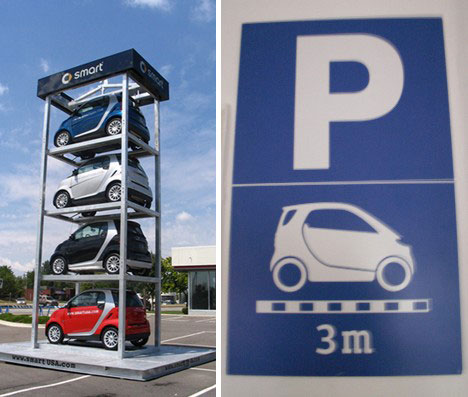 It’s hard to see how the catchy displays at Smart Centers could be modified for commercial or even home use, unless the stack was installed in a pit and then raised & lowered to bring each car to ground level. 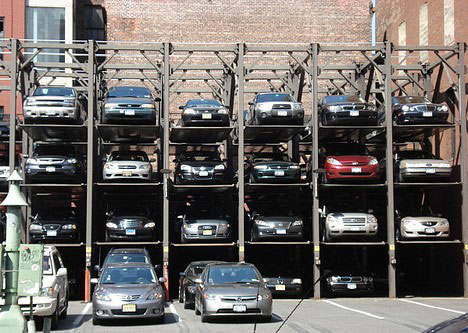 We’re not sure where this parking garage is but from the graffiti and the size/shape of the license plates it may be somewhere in the USA. What isn’t obvious is how the cars on the upper levels got into their spaces… or, how they’re going to get out. 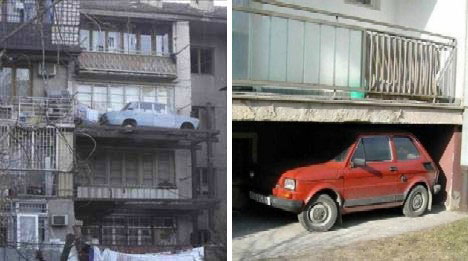 Too many cars and not enough parking spaces is a familiar refrain, illustrated by the images above. Creativity will find a way, whether it’s utilizing the space under one’s patio or out on the balcony – the latter presenting a formidable logistics problem. 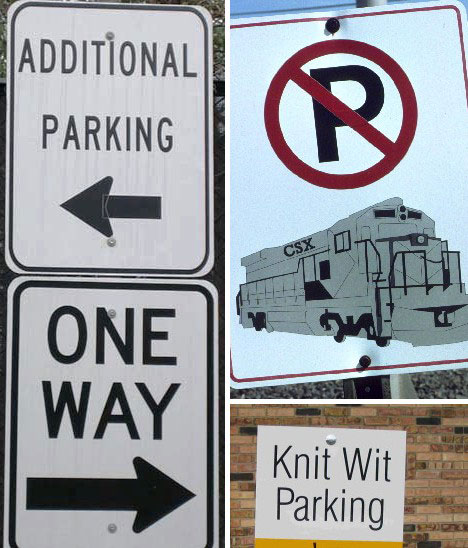 (images via: Morscher and Stitches of Violet)

Maybe the problem lies with the authorities, who don’t make it easy for carowners by setting up parking signs that don’t even begin to make sense.

The Art of the Parking Space 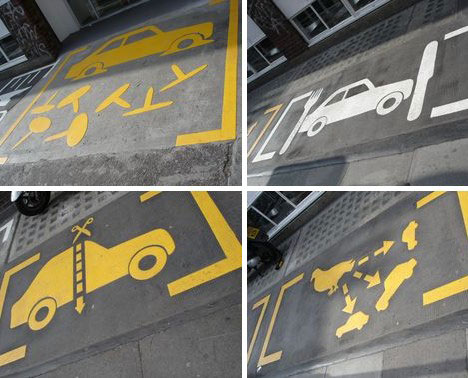 An ad firm in London’s Spitalfields area decided to go all creative-like on the parking spots outside their workplace. Which begs the question… if they don’t want people parking there, why draw the space borders in the first place? 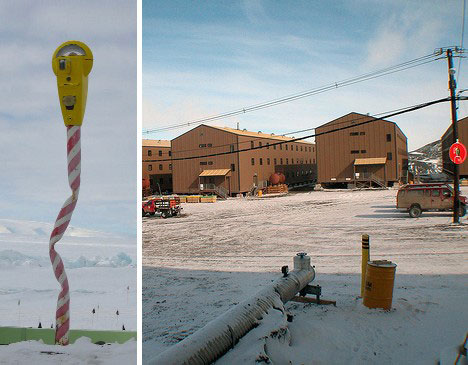 (images via: Jasperridge and Seth White)

Great Scott! Here’s the world’s most southerly parking meter, in the parking lot – yes, they have one – at McMurdo Station in Antarctica. There’s no explanation for the oddly twisted pole it’s mounted on… perhaps a wayward polar bear used it as a scratching post.

Parking Under the Influence 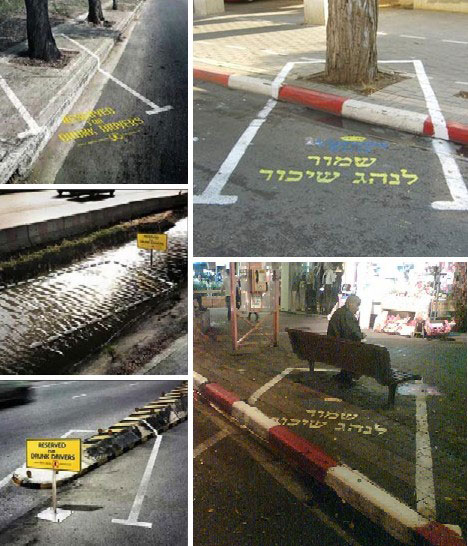 Impaired parking? The “reserved for drunk drivers” guerrilla marketing ads above can be seen in various countries including Israel. Props to the iron-nerved senior – it takes a lot of chutzpah to relax on that bench. Either that or he’s been drinking. 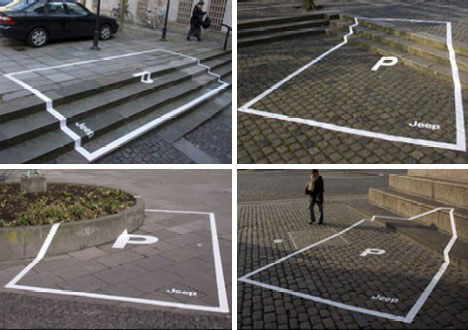 Another series of Guerrilla ads were made for Chrysler’s Jeep brand, the point being that Jeeps are terrific off-road vehicles that can be driven (and parked) on just about any surface.

A New Direction in Design 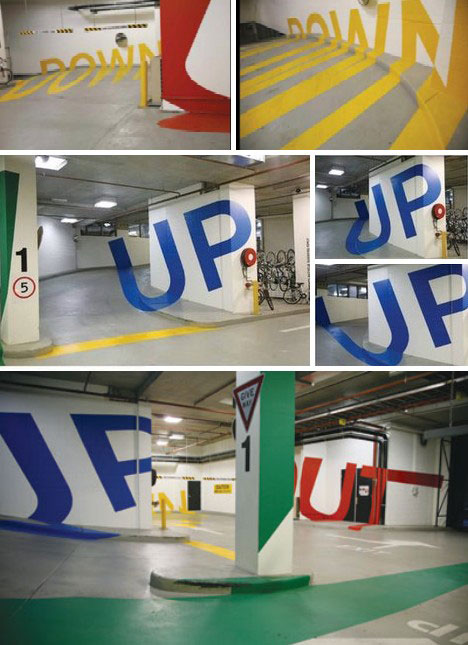 Designers have been enlisted to create something special out of something as utilitarian as a parking lot. Above is the Eureka Car Park in Melbourne, Australia. Drivers know when they’re aimed in the right direction only when the clever optical illusion lettering is exactly lined up.

Eco Parking – Not a Contradiction 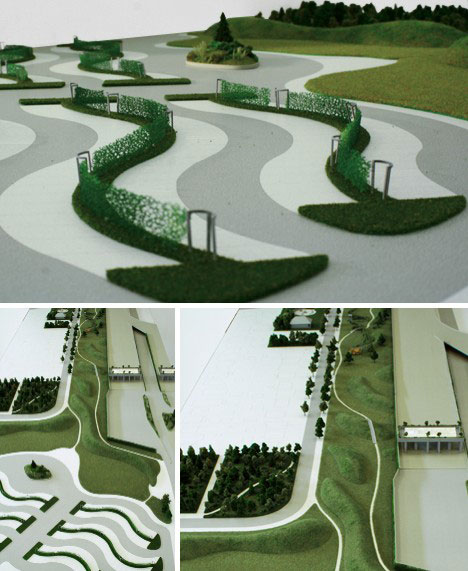 Though some may say that driving isn’t eco-friendly at all, the fact is society is structured for driving. Compromises are in the works though, such as the Green Corridor Indian Road Green Space in Windsor, Canada. Only a design exercise at the present time, the so-called Eco Parking Lot above tilts greenward by making parking more efficient, incorporating naturalized areas and using permeable concrete pavement to let rainwater drain. 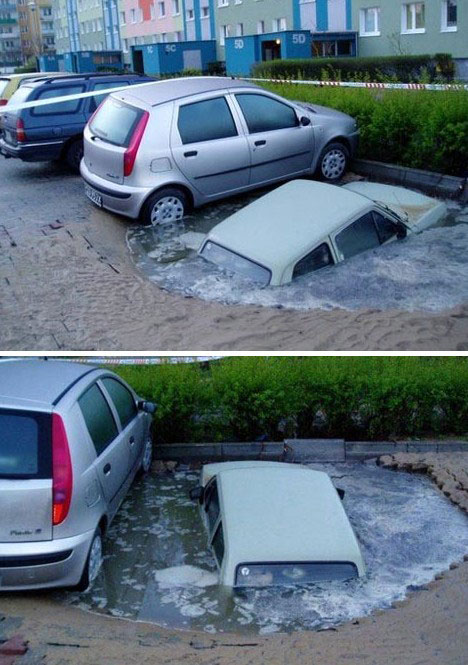 Sometimes you find a parking spot so perfect you wonder why nobody else has taken it. Upon returning with an armload of groceries, it all becomes as clear as quicksand. And just as deep. 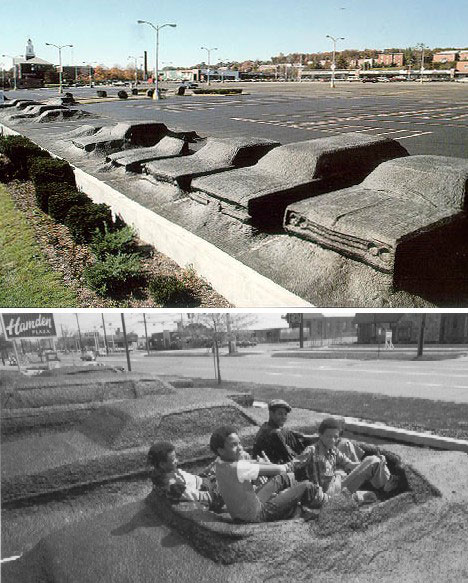 In 1977, a New York design firm called SITE created the Ghost Parking Lot Project in a Hamden, Connecticut shopping plaza by covering a row of a dozen cars, including the always popular convertible, in asphalt. For a quarter century, this static exhibition of road rage (from the road’s viewpoint) stood alongside other car-related artworks like the Illinois Car Kebab and the Cadillac Ranch outside Amarillo, Texas as a symbol of America’s car culture. 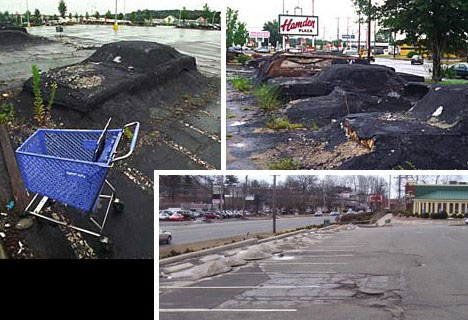 (images via: Roadside America and Biffles at the Bijou)

Just like a shiny 1977 automobile, however, nothing lasts forever – by 2003, the Ghost Parking Lot had deteriorated to a decrepit state. Eroded by the weather and ravaged by the wheels of countless skateboards, the rusty, weed-strewn corner of the parking lot was restored to its original paved expanse of blandness. 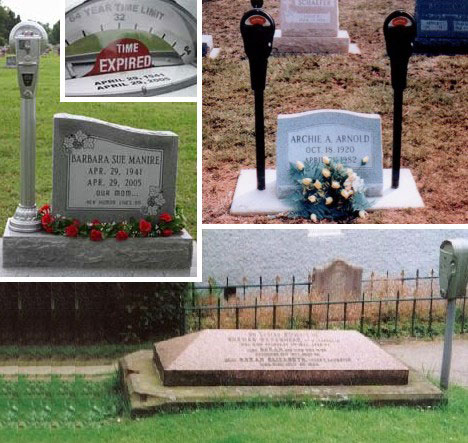 Finding the perfect parking spot can be a lifelong obsession for some, an afterlife-long passion for others as the three graves above illustrate. So what if the time on the meters is expired? So have the occupants.