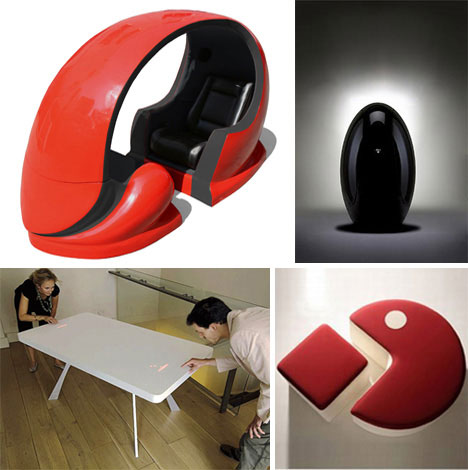 If you are part of the huge PacMan-shaped slice of the population that indulge in the multi-million-dollar video-gaming industry – and especially if you grew up alongside it – there is an entire branch of furniture design that will push your buttons (and maybe even waggle your joystick). From sleek game-pods to tables that will hold every peripheral, from chess on the walls to PacMan on the floor,  here’s 19 household items that would make any obsessive gamer backflip. 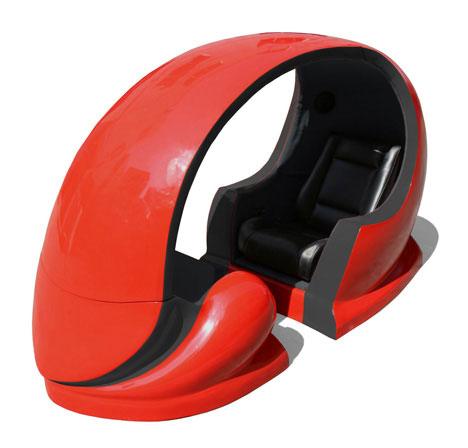 Every self-respecting gamer has a fondness for TRON. The perfect marriage of cutting-edge CGI (for its time), geek-turned-hero plotline and vehicles that should exist, even if they never could. And if TRON sums up the 1980s for many people, the lightcycle sums up TRON. The makers of the PlayPod seem to be trying to channel Syd Mead‘s iconic design, and with a surrounding dynamic sound system and built-in screen, the occupant will truly feel that life is but a game. 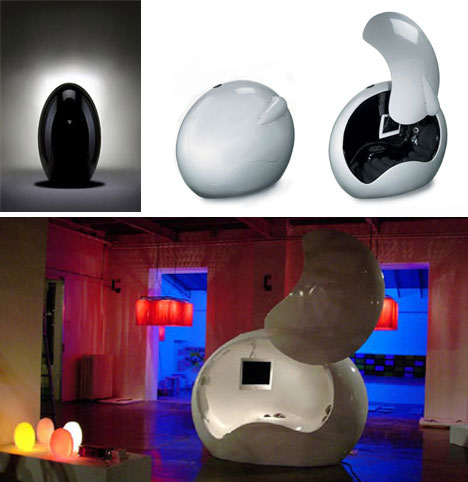 Edge-on, the Ovei looks like it could sprout a facehugger – but this carbon-fibre gaming pod (designed by McClaren Applied Technologies, no less) is a different kind of creature. Hardcore gamers tend to avoid light, fresh air and social contact as a rule, but this design might be taking it too far – especially with the door closed. However, the sophisticated LED lighting and cooling systems might make this a more pleasant alternative to the Great Outdoors. And is it affordable? Don’t ask silly questions. ($100,000, to you and me). 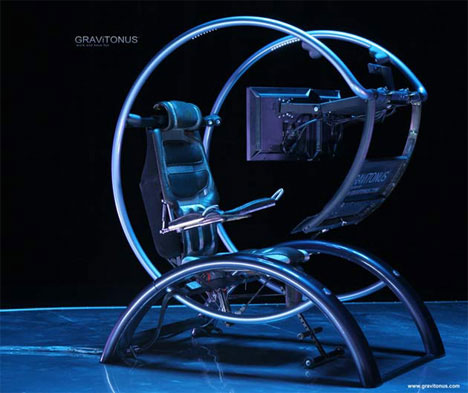 Gamers (the stereotype goes) are an unhealthy lot. When you’re climbing the rankings in World of Warcraft, food and sleep become annoying distractions. The Gravitonus Ergonomic Workstation seeks to address this imbalance, by employing a dizzying range of techniques including ergonomic body support, Matrox Triplehead capability – banishing neck-ache and eyestrain being the idea – and, rather exotically, gravity-field alignment (don’t laugh – it could be the difference between pwning and getting pwned). 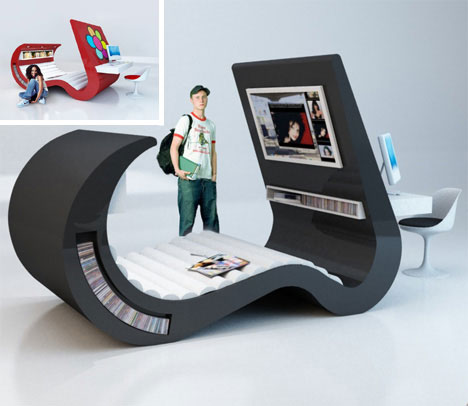 The Wave Chaise, despite looking like a hi-tech flying carpet, is a teenager-oriented multimedia seat with everything built in, including a table for PC use. That padded seat looks perfect for lounging, napping and (dare I say it) drunkenly crashing out. It’s also ideal for reclining with the console controller of your choice (if that screen allows), although there’s the dreadful inconvenience of getting up to change discs every now and again. 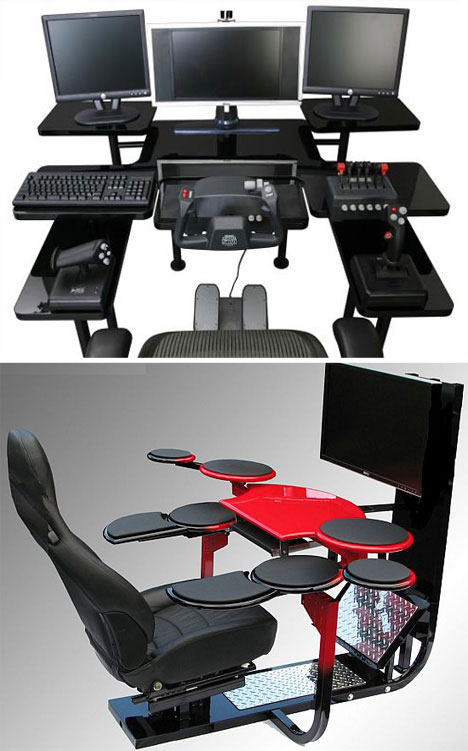 (Images via: Digital Edge and )

But the cream of the gaming crop, the l33t of the l33t, don’t want to relax – they want to be in the zone, a few cans of their favorite high-energy drink coursing through the body and setting their senses jangling – and all the tools of their trade (joysticks, mice, headsets) accessible without thinking. They need a table that understands this. And that’s where the Digital Edge MSY Gaming Table and the V1 Chair come in – not cheaply, but professionals will see them as an investment. 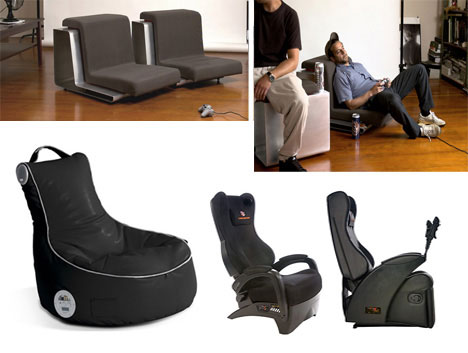 (Images via: Upwell Design and YourFurniture and Ultimate Game Chair)

For the more casual gamer, a lifetime of slouching stretches ahead of them. Grab a few beers, turn on the ‘360, grab the controller and sit down, and then over the next ten minutes slump like a mudslide until you have achieved the perfect equilibrium point between chair and floor – the kind of posture that would infuriate a parent (any parent). The DownLow seat and the SlouchPod are designed to slump for you – in the former case by being at ground level already, and in the latter by having a low padded body to sink into. For the less inclined, the Raptor and Ultimate Game Chair go for luxurious comfort embedded with game-augmenting features like vibrating motors and remote control holders. 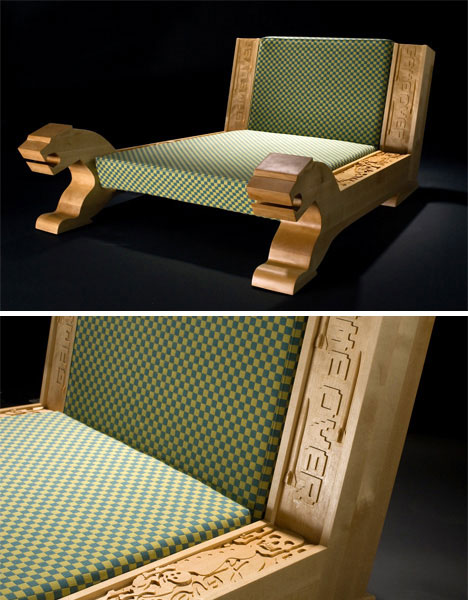 It may look a little too grand for the average bedroom, but this near-horizontal chair has no pretentions – it’s called the Slacker Chair, and it’s decorated with scrollwork that reads “Game Over”, just to remind you what’s at stake. Slouch thyself in luxury, gamer. 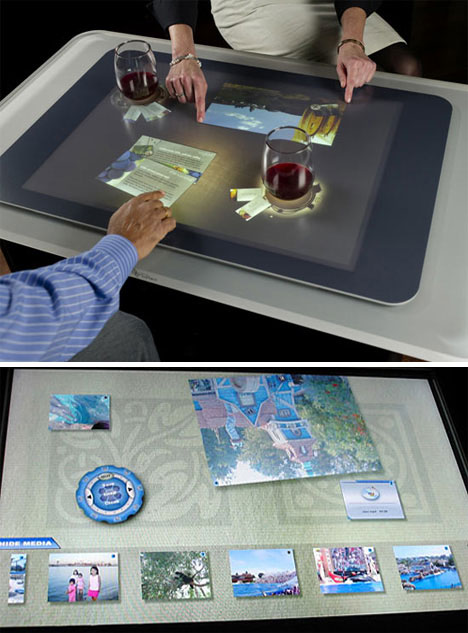 (Image via: Microsoft and CNET)

Remembering the amazing haptics terminal used by Tom Cruise in the film Minority Report? In the future, that is how you will play your favorite RTS. In the meantime, a halfway-house is on the horizon in the form of a touch-sensitive table display (an upright screen would be too tiring on the arms, especially for those long stretches between tank-rushes). Microsoft Surface is the current leader in this field, but HP Labs’s Misto is also an appealing prospect. Bye bye, faithful mouse. 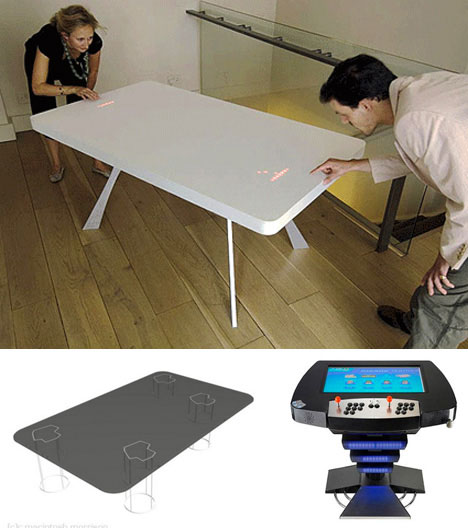 (Image via: Moma and Mostly This and Liberty Games)

Retrogamers hanker for the simpler, purer gaming delights of yesteryear, before movie franchises and EA Sports made the whole thing a little too mercenary for their own liking. And what could be purer than Pong? The Pong table creates that sociable glow of Atari nostalgia with LEDs and trackpads (and also doubles as a table). The Asteroid table sadly isn’t functioning (how cool would that be?) but its vector-style legs are sure to bring a lump to the throat of those of a certain generation. For the more contemporarily-minded, the Novotable is a multimedia center with a built-in next-gen console (either an Xbox-360 or a PS3 – you decide). 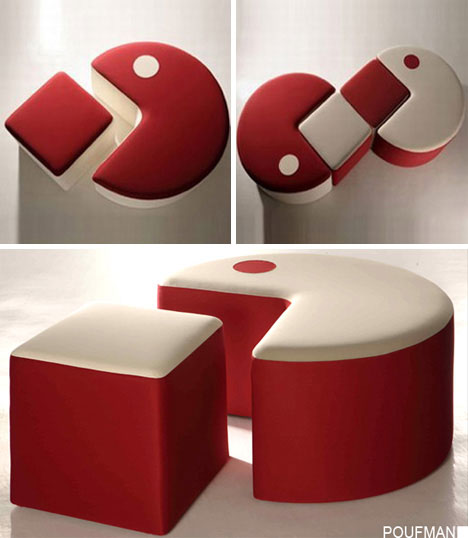 Everyone recognizes the wacka-wacka sound of Pacman on the munch. If you have the Poufman as one of your items of geek-chic home furniture, it will always be in your head, like a tune you can’t shake off. That’s not a bad thing, of course. 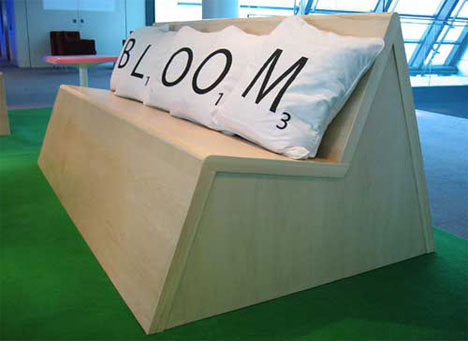 But why stick with digital? If you’re the other kind of gamer with a penchant for the click of tiles and nary a pixel in sight, you’ll find this Scrabble furniture a lot of fun. We instinctively know that someone, somewhere has collected together enough of these cushions and chairs to make an actual working Scrabble set – and they definitely need to get out more often. 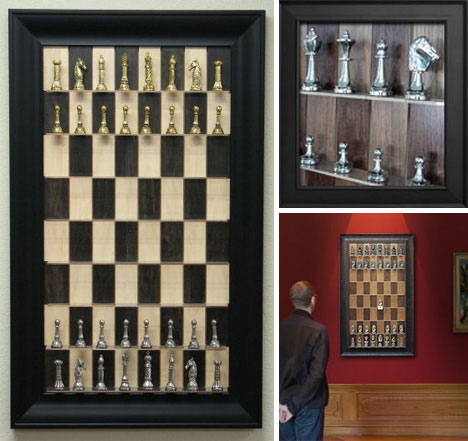 (Image via: Straight Up Chess)

And how about hallway gaming? You hang this Straight Up Chess board in the hall like a picture or mirror, and every time you or your opponent pass, you make your move. If you regularly have appointments that you can’t afford to miss, maybe this piece of furniture isn’t such a good idea to have around (unless you’re an adept speed chess player).