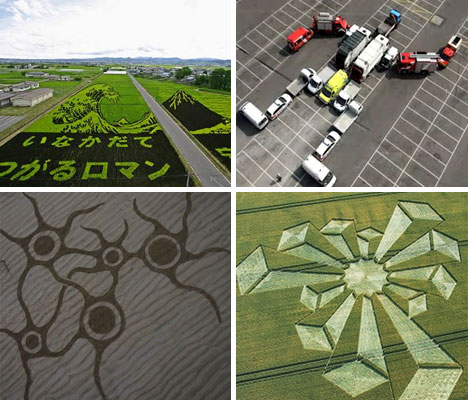 Whether you’re convinced that crop circles are caused by some extraterrestrial force or believe it’s the work of humans, you’ve got to admit that some of the designs are pretty incredible. And, these mysterious and intricate field patterns aren’t the only amazing things you can see from the air – snow raked into swirly designs, Japanese rice paddy art, strange spontaneous sheep formations and even ‘transformer’ robots made from choreographed vehicles all make for impressive high-altitude viewing.

Real-Life Transformers Made from Vehicles 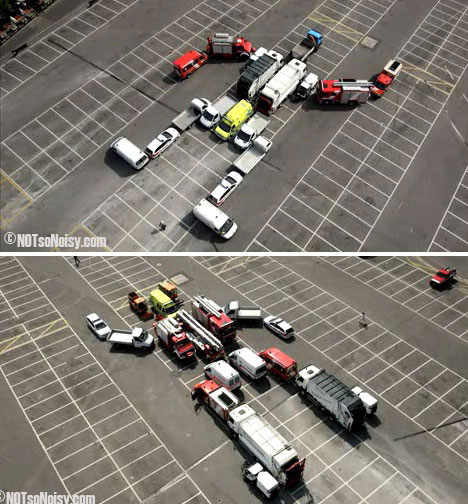 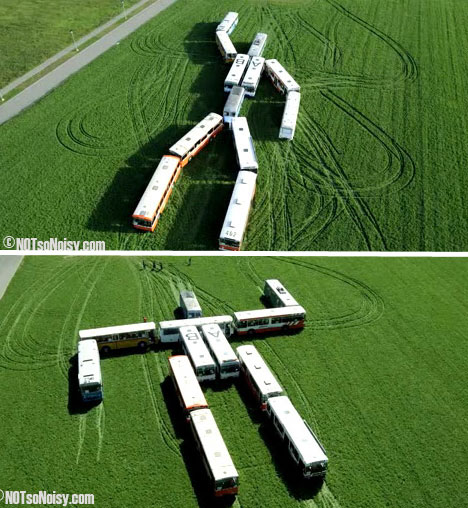 Award-winning French-Swiss artist Guillaume Reymond created ‘Project Transformers’, which utilizes different types of vehicles to create designs that look like giant robots from the sky. The first project used ambulances, fire trucks and other vehicles to perform a choreographed series of movements to form the shape of the ‘robot’. The second part of the project used buses in a field to achieve a similar effect. 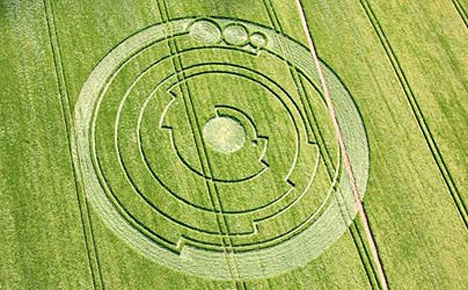 (images via: The Telegraph)

The most complex crop circle ever to be seen in Britain was discovered in June 2008. The formation – which measures 150 feet in diameter – appears to be a coded image representing the first 10 digits of pi (3.141592654). Astrophysicist Michael Reed said, “The tenth digit has even been correctly rounded up. The little dot near the centre is the decimal point. The code is based on 10 angular segments with the radial jumps being the indicator of each segment. Starting at the centre and counting the number of one-tenth segments in each section contained by the change in radius clearly shows the values of the first 10 digits in the value of pi.”

Rake Art by Lenny and Meriel 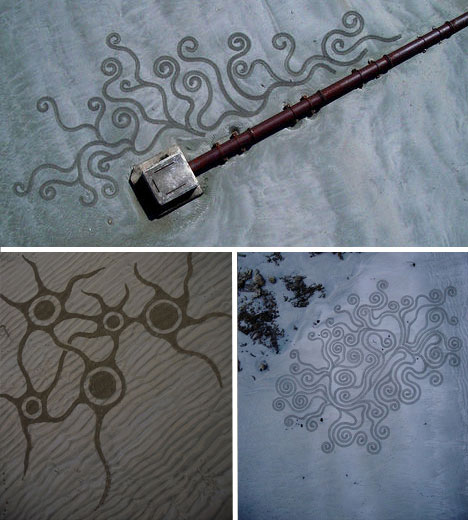 A couple named Lenny and Meriel, based on the island of Guernsey in the UK, use rakes to create beautiful patterns in sand and snow and then use a kite to photograph them from above. The designs have a flowing, organic feel that works perfectly with the stark, natural setting and media. 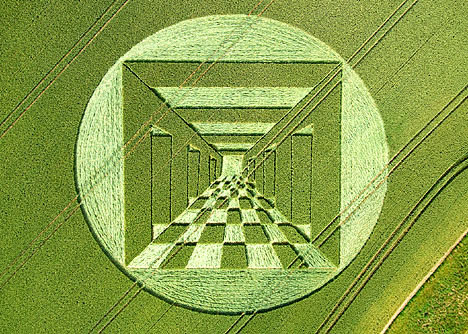 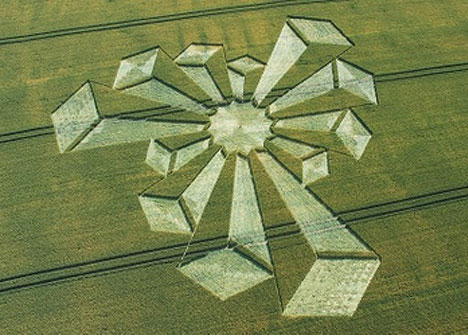 (images via: The Daily Mail + WIRED) 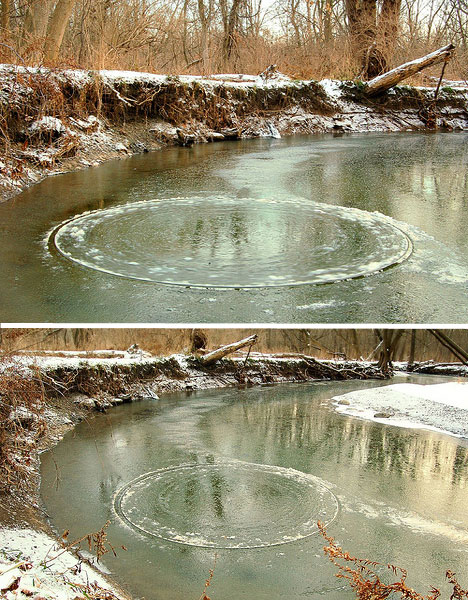 One morning in December 2008, photographer Brook Tyler came along an iced-over creek in Mississuaga, Canada and noticed something bizarre: there was a perfectly round, 6-foot circle of ice spinning, presumably over an eddy. It’s unlikely that it was man-made, since the ice was far too thin to walk on. Geographers say these ‘ice circles’ are caused by quick shifts in temperature. 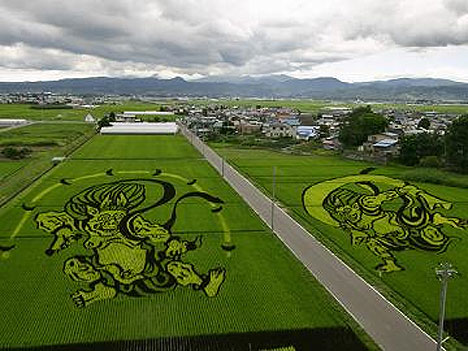 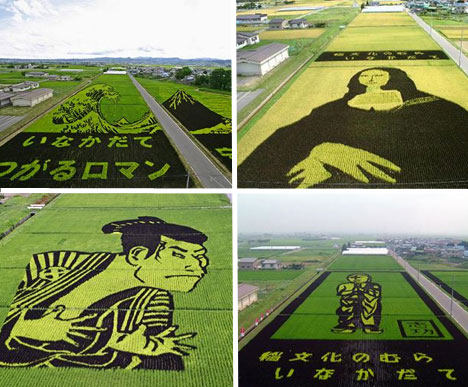 Every  year, farmers in the town of Inakadate in Aomori, Japan create vast works of art in their rice paddies. It’s done by planting purple and yellow-leafed rice along with their local green-leafed variety. These rice paddy images are visible during the growing season, until the harvest in September. The tradition started in 1993 and each of these five images shows a different year’s design. 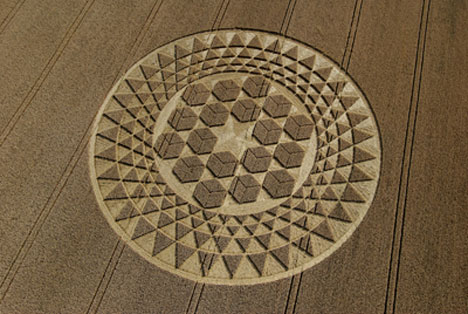 This crop circle is an interpretation of Metatron’s Cube, a concept of ‘sacred geometry’ which revolves around the belief that through geometric form, one can gain an understanding of the nature of the world around us, and the universe as a whole. The full explanation is a bit too tedious to get into here, but suffice to say that a whole lot of thought was put into this design. 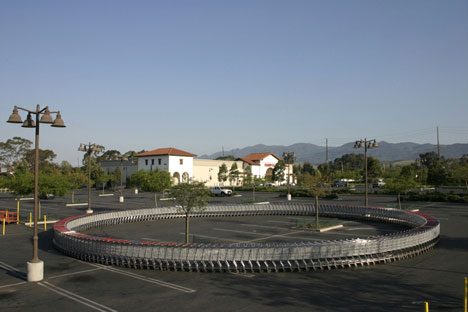 Urban areas may not see crop circles of the traditional sort, but some creative people came up with a way to create one in a Costco parking lot, of all places – with shopping carts. The circle, created in Goleta, California, follows the natural curve created by a line of shopping carts. 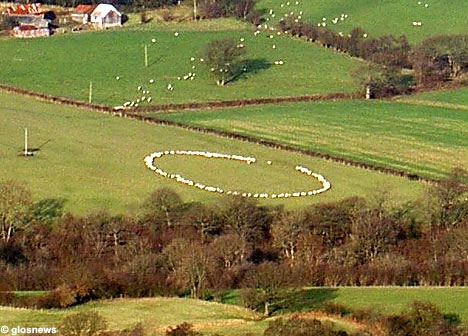 Forget crop circles – what’s even weirder is this photograph of sheep on a farm in England that spontaneously assembled in a circle. The group of roughly 100 sheep organized into a circle and stayed that way for about 10 minutes before dispersing. Even more strangely, three fields away, another group of sheep did the same at around the same time. Real estate agent Robert Bird just happened to spot them and take this photo. 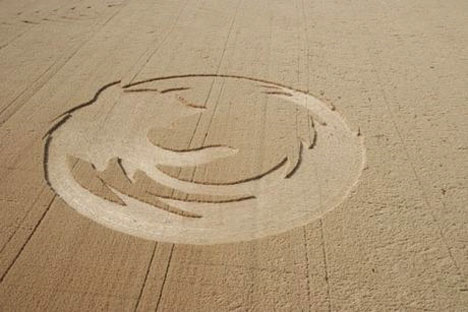 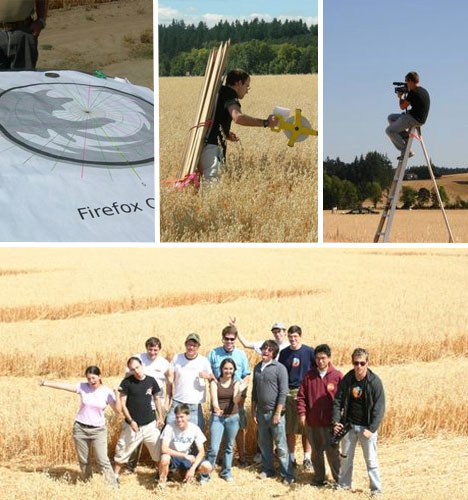 (images via: The Contaminated)

After the 4,500-square-foot ‘Firefox’ crop circle appeared in a field in Oregon, some who were only able to see it from photos weren’t convinced it was real. However, these photos show the OSU Linux Users Group in action, planning and creating the ‘crop circle’.  Check it out on Google Maps, too.