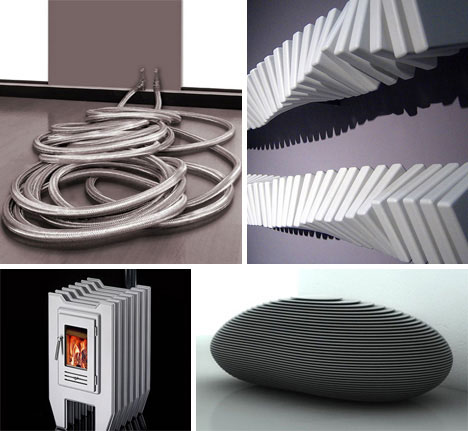 Radiators seem designed for the background. They line walls and prop up corners, and everyone looks past them because, after all, they are only radiators.  But even this seemingly ignoble collection of valves, pipes and ribs can become an urban designer’s dream canvas. Here are 20 examples of how modern radiators could really turn up the heat in your dream home. 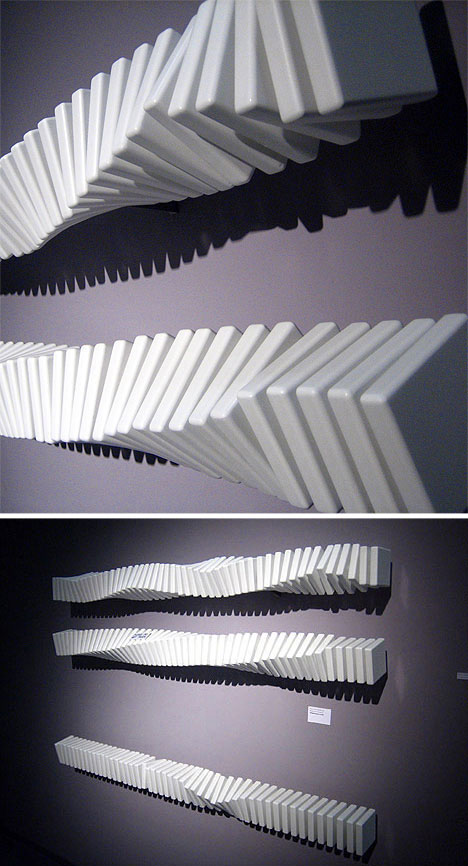 When designer Marco Dessi decided to take the traditional radiator design and give it a twist, he wasn’t kidding. The Twist radiator is constructed of square ceramic plates that rotate to form any sinuous pattern you prefer – as if the rotating skyscraper planned for Dubai was fixed to your wall. Probably best to let it cool before you get artistic, though. 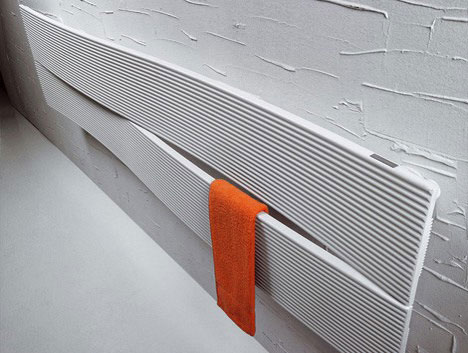 But if there’s something really wrong with the Twist, it is that clothes will presumably roll right off it. If you live above (or below) a certain latitude and you want to do the eco-friendly thing by avoiding tumble-drying your clothes, you need a radiator that stays put so you can hang things on it. This undulating eyecatcher of a towel-warming radiator is perfect for chasing the damp out of your clothes – that is, if you lay it horizontally, since it can also be fitting floor-to-ceiling. 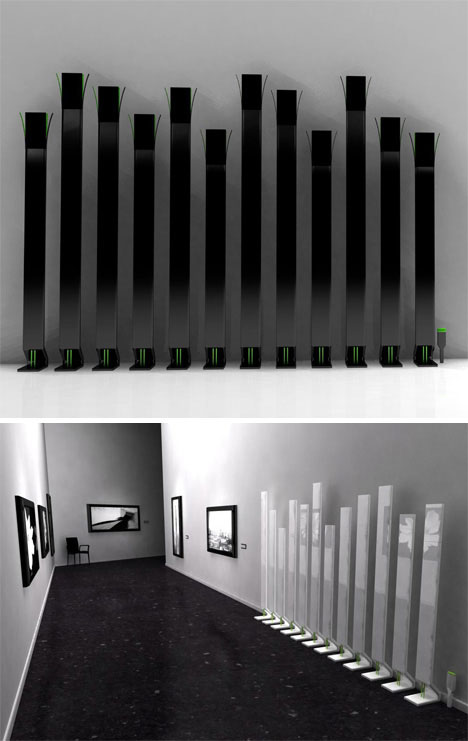 Cast your mind back to your Physics lessons at school – and the bimetallic strip, used to demonstrate how different rates of heat expansion can made a primitive mechanical device. Not-so-primitive is the glossy Flowering Radiator, which has bimetallic strips as its “petals” – add heat, and they flower before your eyes. A much classier way to (literally) see if the heating is on.

Who says radiators have to come in abstract and bafflingly esoteric designs? For a slice of life we can all identify with, how about lining your wall with toasty-warm fences and gates? It is designer Lucy Merchant’s idea, and while we can all identify with the concept, it is the household pet (ever watchful for an escape route) whose turn it is to be nonplussed. 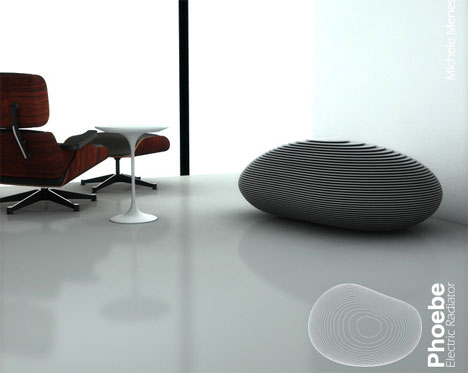 This radiator, called Phoebe, gives a distinctly Zen-like vibe and would look stunning in the corner of any room. But there is one question to ask: just how hot does it get? Mild enough to safely drape your coat over it when you come in from the rain? Mild enough to drape yourself over it (because it’s just the right shape)? Let’s hope it comes with a well-tuned temperature setting. 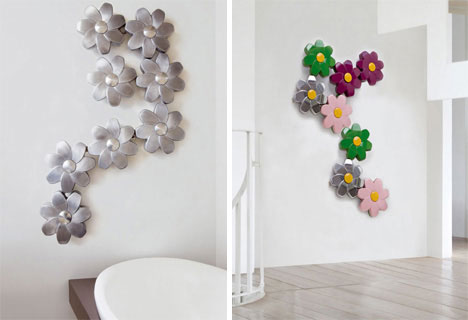 A rather more obviously flowering radiator, this one. These aluminium daisies can be strung in a chain of polished or painted aluminium, hiding the radiator valves and creating a fully tailored floral feature that not only reminds you of summer but raises the temperature accordingly. 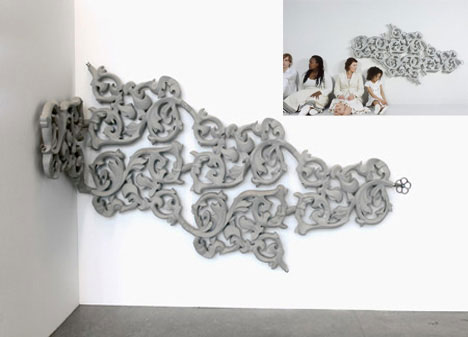 (Images via: Reluct and Droog)

Seemingly inspired yet again by front gates – except of the more ornate, gothic variety – this Heatwave radiator is another piece of warming art. All that scrollwork certainly gives it a lot of surface space, and although the picture example is solid there is a water-carrying version inproduction…so we have to ask: what happens when it needs internal cleaning? (Surely even the bendiest of pipe cleaning equipment would find it a nightmare). Instead of being in one piece it comes in aluminium and concrete sections, allowing you to curl its dazzling scrollwork round your walls. 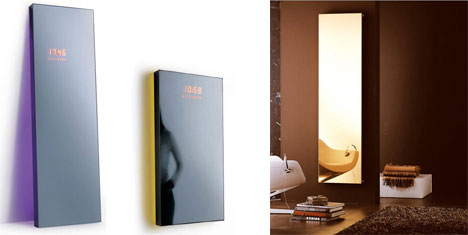 Back to the undeniably modern. Fans of 2001: A Space Odyssey will get a Jupiter-sized kick out of the Tubor monolith radiator, a stunning reflective slab of black that pumps 500 Watts of heat into the room and even tells you the time (with glowing numbers reminiscent of Fox’s 24). The vertical model on the right –  part of Caleido‘s wide range of ultra-modern radiators – doubles nicely as a completely convincing full-length mirror. 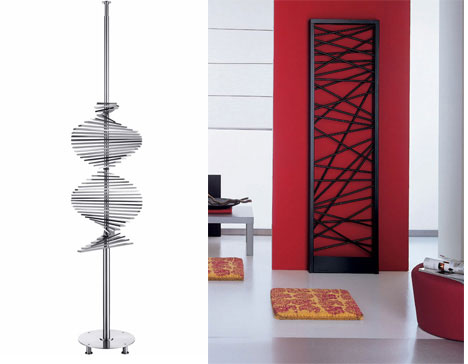 (Images via: Accuro-Korle and Scirocco)

Now, what to make of Accuro-Korle’s twisting helix of heated metal? The Ecstacy certainly looks impressive (and apparntly keeps their skilled craftsmen busy for the best part of a month) but let us be blunt – $13,000? You would really have to have a thing for designer helixes. The Shanghai goes back to a more wall-hugging approach, choosing to buck convention in its own way by having a metal cat’s cradle of a main body. 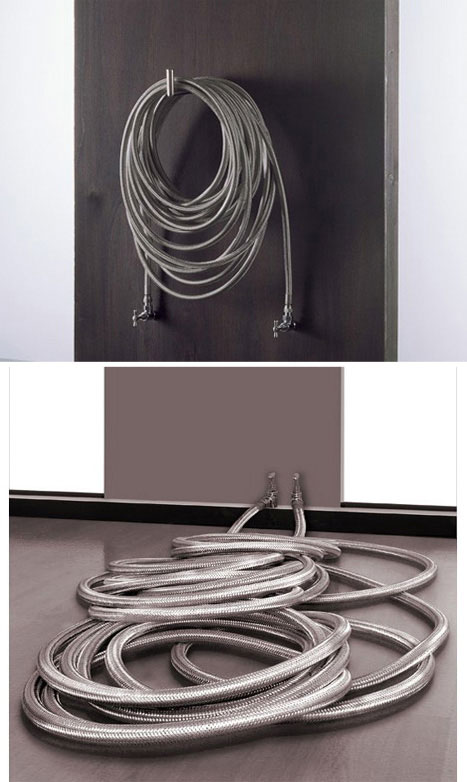 Now for an idea with real practical value. The Coiled Radiator is a radiator crossed with a garden hose – a metal-covered rope that you can snake along any wall or into any corner of the room you choose. Why nobody has thought of this before is beyond us, but the main thing is that someone now has. May it snake absolutely everywhere. 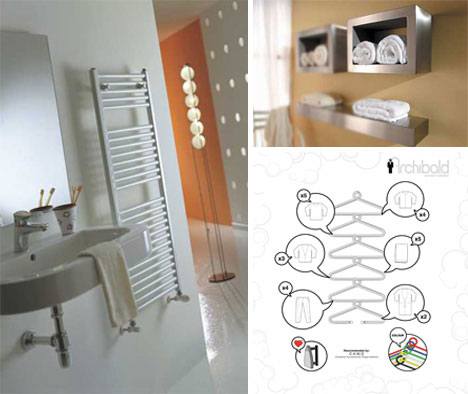 (Images via: Antrax and MoCo Loco and design boom)

And now for more radiators that aren’t just for show. These examples have one mission above all – to dry things. The Scaldasalviette Scala is a sturdy clothes-horse with warm water running through it (and we say that admiringly). The Sbox wants to be pride of place for your towels, and achieves it by being the only heated shelf in the house. But for designer brilliance (to an award-winning standard), the Archibald beats them all by being a vertical array of six internally-heated coat hangers – with the added bonus that gravity should be doing most of your ironing for you. 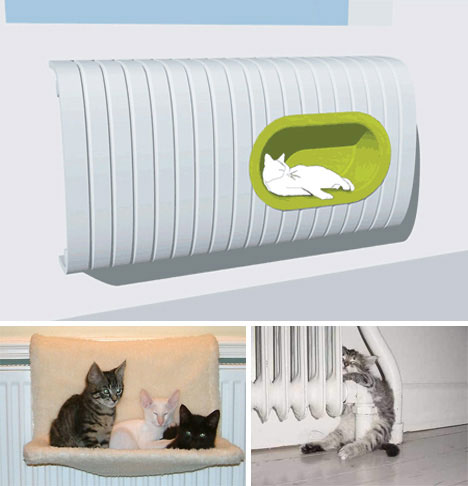 Pets love radiators. If only they were a little more…comfortable (as the kitty on the bottom right must be thinking). There are two ways to meet this challenge – by designing a way to get pets comfortably close to the heat, as with the  Radiator Bed pictured – or to redesign the radiator itself. The Fedora contains a recess for a felt basket – perfect for warming your feet, if your cat hadn’t just leapt in to stake its claim. 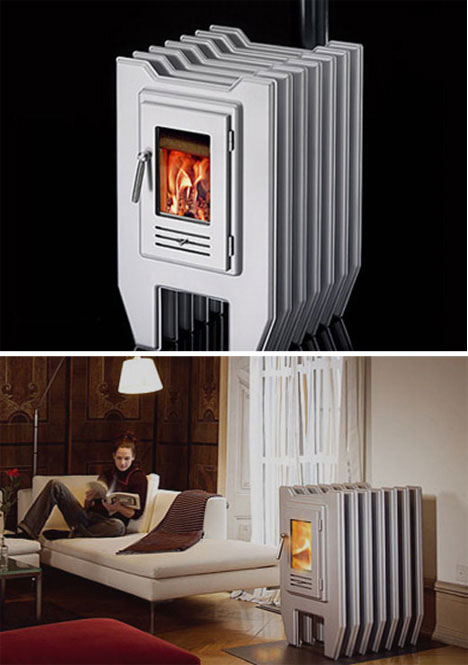 Who hasn’t wondered if you could cook an egg on a radiator? As anyone will know who has tried, radiators don’t make good frying pans – but in the case of the Ray, they do make great ovens. This highly efficient radiator will cook your food and heat your room, blurring the line between kitchen and dining room in a delightfully lazy way.

And if it’s cold outside and you really cannot bear to leave all this toe-curling warmth behind – take your radiator with you. Radiator On The Go is a framework of metal hollows containing cushion-wrapped aluminium blocks. When you’re leaving the room, grab a block to keep you warm, like a hot-water bottle – or pop one against the wall of your backpack before you brave the worst that Mother Nature can throw at you.