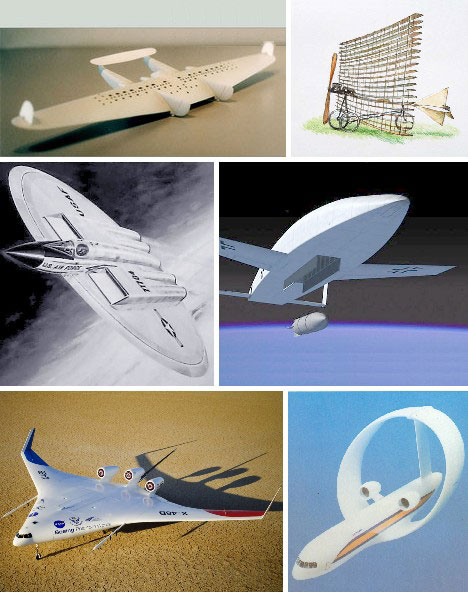 These incredible concept aircraft push the envelope of what was – and is – possible, though often the envelopes have pushed back enough to ensure they never went into full production. The only thing these visionary designs will lift is our imaginations but in that respect they succeed… brilliantly.

Those Magnificent Men in Their Flightless Machines 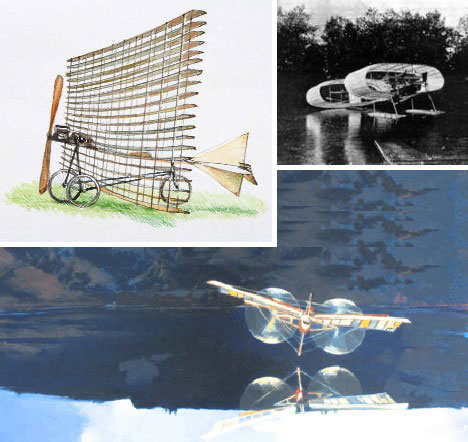 Flying machine concepts have been leaping off the drawing board even before the Wright Brothers took to the air over a century ago, though with a certain amount of trial and error shaping the aeronautical learning curve. The selection above leans more towards error, highlighted by Horatio Phillips’ 1904 Multiplane which looked less like an airplane than a motorized venetian blind. 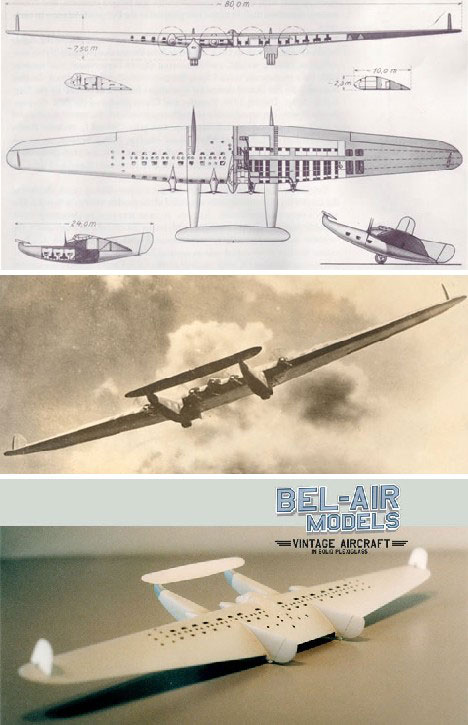 (images via: Century of Flight and Quirao)

The First World War saw rapid development of the airplane, both as small fast fighters and increasingly large bombers. The proven safety of flying also spurred the emerging passenger airline industry and a number of unusual concepts were drawn up. Perhaps the most advanced for its era was the Junkers J-1000, a futuristic flying wing that must have seemed like a starship to the world of 1924! Dr. Hugo Junkers had been contemplating flying wing design concepts since 1910 and the humongous J-1000 was their ultimate expression: 26 cabins in the wing to hold up to 100 passengers in total, plus a crew of 10 and fuel for 10 hours of continuous flight. 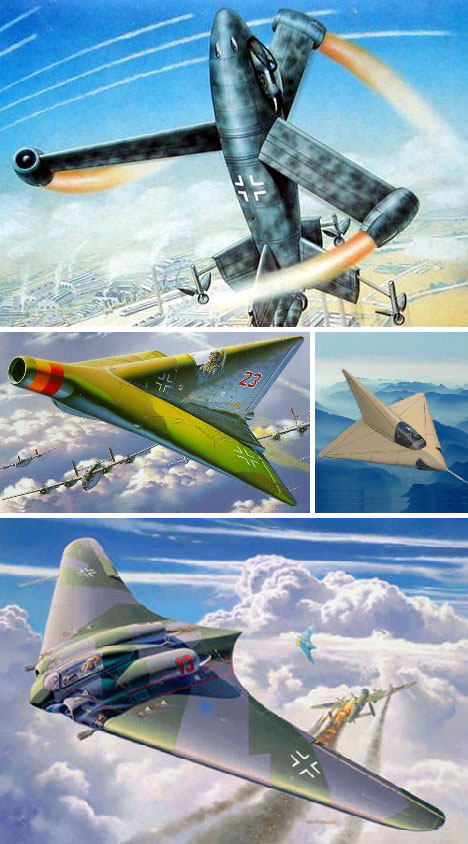 (images via: Prototypes.com and Antics Online)

Much has been made of fantastic Nazi secret weapons and how they could have changed the result of World War II had they been introduced earlier, and in quantity. It’s a legitimate theory – some of the advanced concept airplanes, jets and rockets were unlike anything the Allies had even seen. Some, like the Me-262 jet fighter and the Me-163 Komet rocket interceptor actually did enter combat in the late stages of the war; above are some others that never progressed past the prototype stage – thankfully. From above top: the bizarre Focke-Wulf Triebflugel, the Lippisch DM-1 and the Horten Flying Wing. 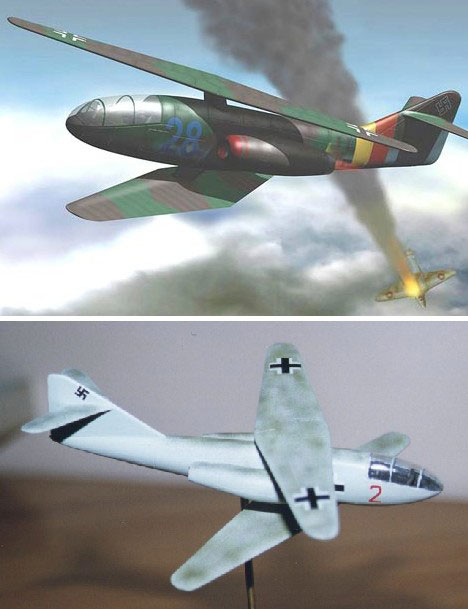 One of the most interesting of the many odd Luftwaffe concepts was the scissor-winged Messerschmitt P-1109. The twin-jet powered fighter featured a pair of swiveling wings that were positioned perpendicular for slow takeoffs and gradually swiveled to enable very high cruising speeds. 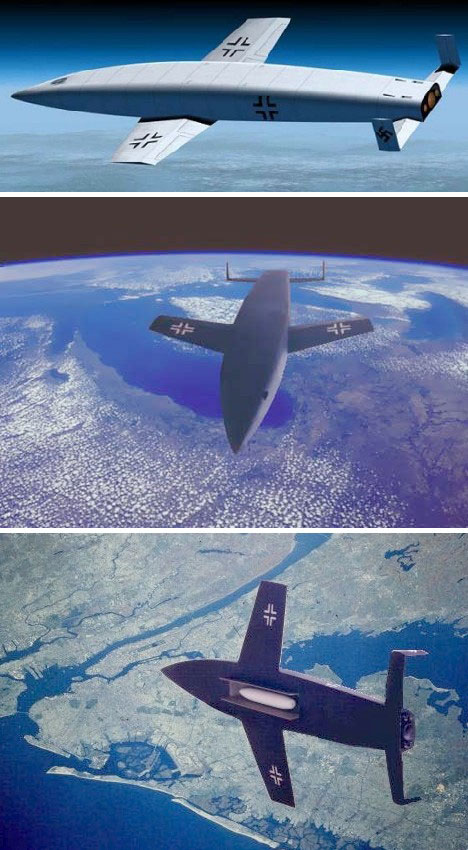 Perhaps the most frightening of all the German prototype “wunder weapons” was Dr. Eugen Sänger’s Amerika Bomber. Amazingly, Sanger worked out all of the main fundamentals of what was essentially the world’s first space plane before the war even began. The sleek, 90 ft long plane known as the Silverfish was to be powered by a liquid-fueled rocket engine that would lift it at least 90 miles in altitude. It would then continue at speeds up to 13,724 mph, “skipping” in and out of the atmosphere until it arrived over its target – where an 8,000 lb. bomb would be dropped – and on to a space-shuttle style gliding landing nearly 15,000 miles from its takeoff point. The above rendering shows the Amerika Bomber over Chicago (center) and New York City (bottom). Chilling, no? 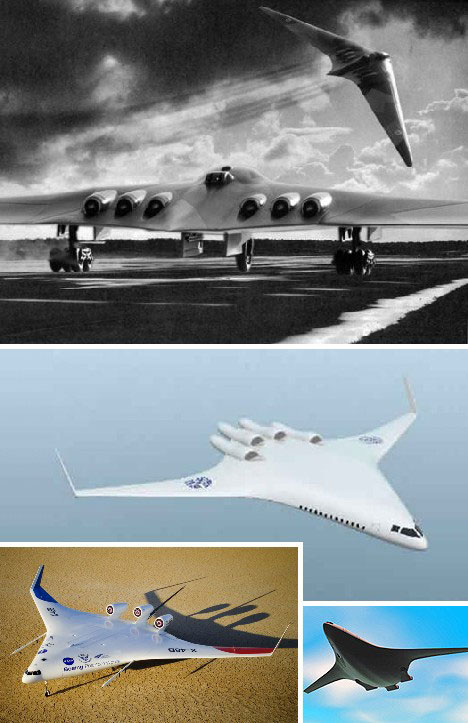 Today’s cutting edge designs for future passenger planes show a startling resemblance to some of the more ambitious German Amerika Bomber concepts, a testament to the farsightedness of their design. From above top, the Horten XVIIIB, the SAX-40 and the Boeing X-48B blended wing-body. 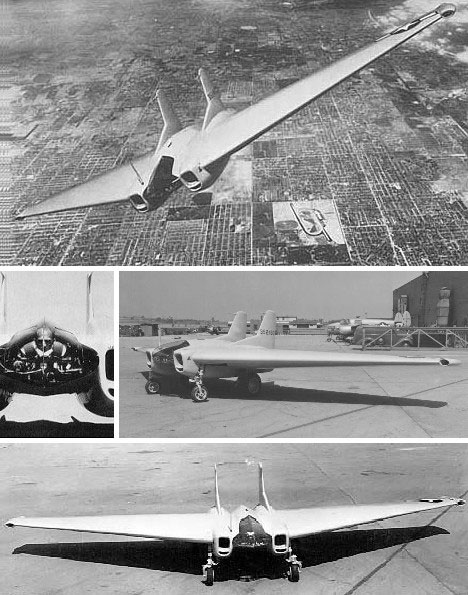 As World War II progressed, the United States also scrambled to put the most advanced aircraft possible into the unfriendly skies over Europe and the Pacific. A number of decidedly strange aircraft made it as far as the prototype stage before cooler heads prevailed. One of the strangest was the Northrop XP-79B, known as The Flying Ram because, well, that’s what it was intended to do. Made of (extremely flammable) magnesium with steel armor plate on the leading edges of the wings, the XP-79B was powered by two jet engines and the pilot was expected to operate the plate while lying flat on his front! The XP-79B was canceled after a disastrous September 12, 1945 test flight at Muroc Dry Lake, California in which the plane crashed and the pilot was killed. 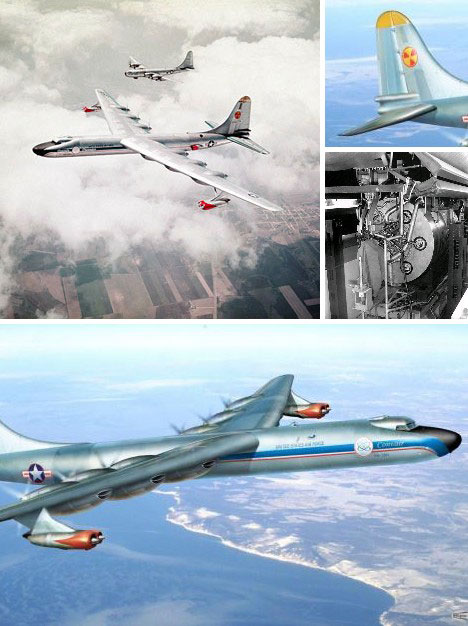 The NB-36H Crusader looked much like a standard B-36 Peacemaker bomber when it first took to the air in 1955 but looks, in this case, very much deceive. On the inside, layers of lead insulation in the cockpit and thick yellow-tinted glass served to provide the crew protection… from any radiation emitted from the nuclear reactor in the converted bomb bay! The NB-36H may not have been nuclear-powered but if testing proved the concept feasible, the term “atomic bomber” would have taken on a whole new meaning. Supposedly, the Air Force was so paranoid about a possible crash of the NB-36H, chase planes carried a paratrooper squad who would jump if necessary and secure the crash site. 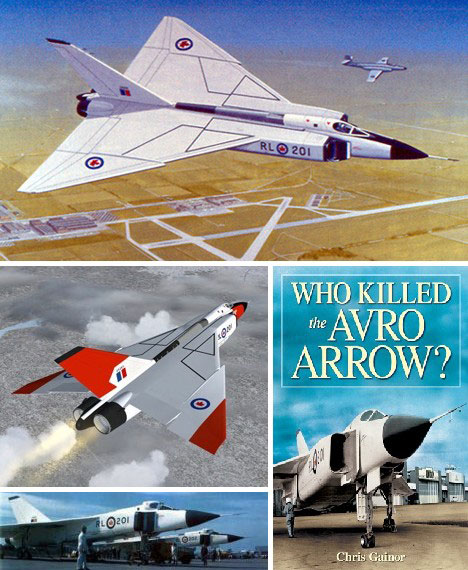 (images via: Aviation Artists and Arrows to the Moon)

As a Canadian, I have a soft spot for the Avro Arrow even though the program was canceled a year after I was born. In a way, the Arrow represents something quintessentially Canadian: a sense of great potential cruelly snatched from our grasp – with the blame landing on our American neighbors. As for the Avro Canada CF-105 Arrow itself, it was an advanced interceptor that outclassed most existing fighter jets of the time. The sudden cancellation of the Arrow program on
February 20, 1959 caused 50,000 workers at the main Avro plant and at outside suppliers to lose their jobs. The five Avro Arrows that were produced were ordered scrapped along with all parts, tooling and paperwork associated with the project. Canada’s aircraft industry never recovered from the loss but the Avro Arrow lives on in the hearts of Canadians. 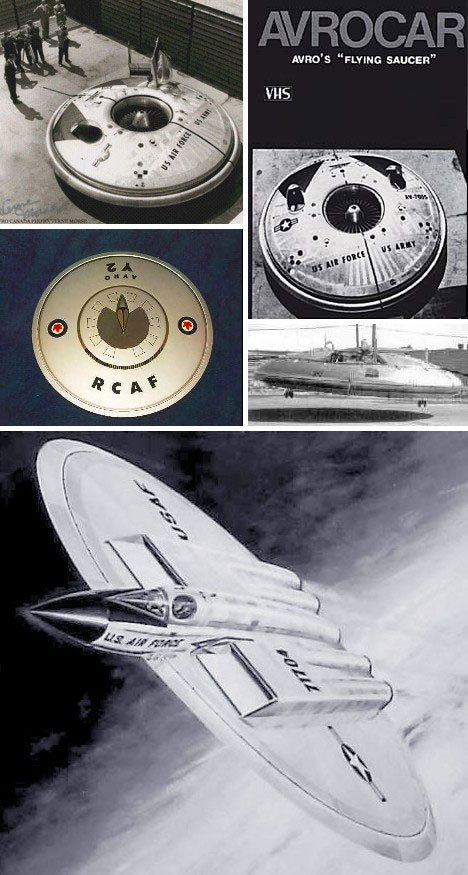 (images via: Virtually Strange and Laesieworks)

The Arrow debacle has a little known postscript: Avro’s small Special Projects Group soldiered on for several more years with funding provided by the USAF. Their work involved creating workable “flying saucers” of various sizes and styles. The smallest was the VZ-9-AV Avrocar, designed to be a flying jeep, while larger saucers like the WS-606A were to operate at altitudes up to 100,000 feet at up to 3.5 times the speed of sound! 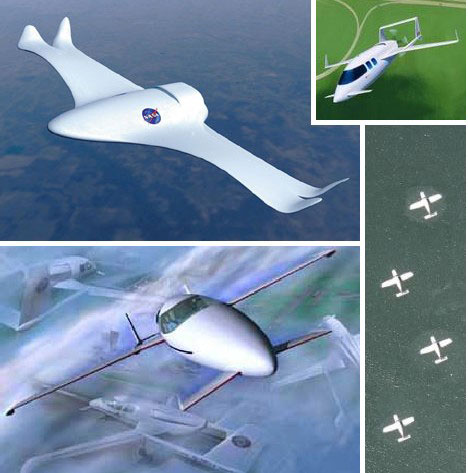 If you think small aircraft like traffic-patrol Cessnas and corporate jets have looked pretty much the same for the past few decades, take a gander at what’s to come: computer designed, ultra fuel efficient light planes and jets are about to enter your personal airspace. Government agencies are involved in developing some of these intriguing concepts, one example being the Small Aircraft Transportation System (SATS) program from NASA and it’s FAA partners. One audacious concept is a pane with flexible “smart wings” that change their shape to match optimal flying conditions. 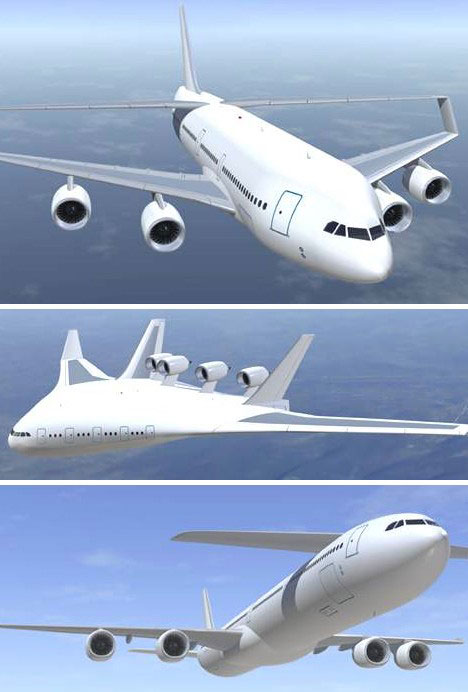 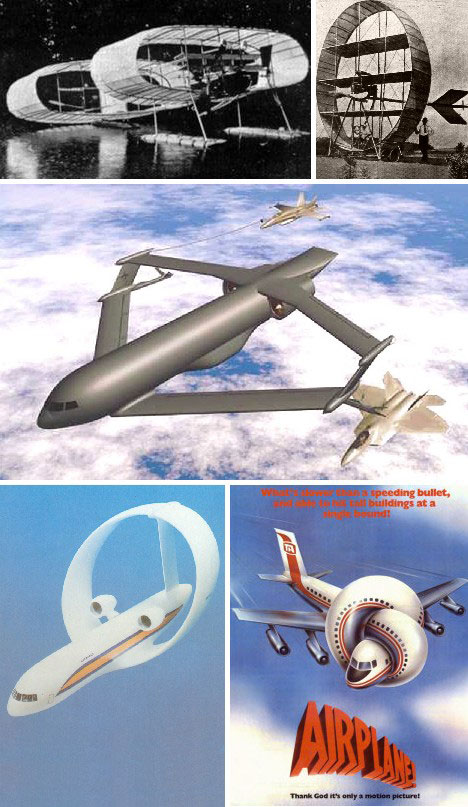 (images via: Wapedia and Above Top Secret)

Lockheed’s loopy design concept from the early 1980s resembles the classic poster for the movie “Airplane!” but closed-wing aircraft are no joke – the concept has been explored since the early days of powered flight. Theories suggest closed-wing aircraft would eliminate drag induced by wingtip vortices: a circular wing HAS no tips. Producing a practical airplane around the concept, however, has been so far elusive. 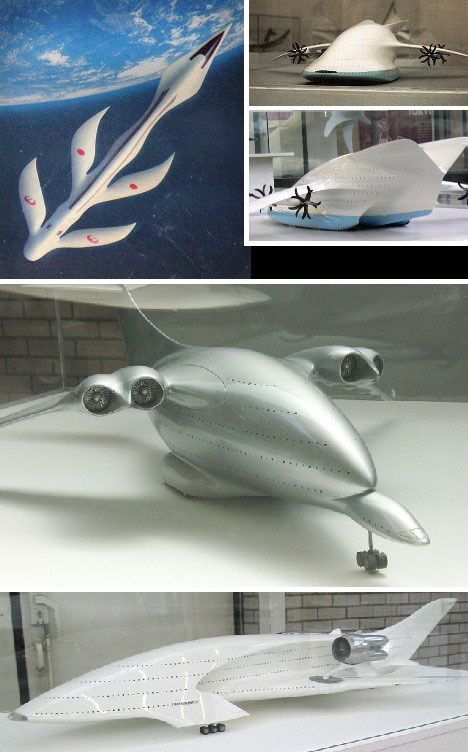 Looking up is looking good thanks to designers like Luigi Colani. Still active at the age of 81, Colani has been perfecting the art of biodynamic design as applied to the mechanics of modern life. The airplane concepts above illustrate Colani’s deft grasp of organic form that still respects the requirements of practical engineering.

What may be most amazing about these brilliant concept planes is that even though their designs have to conform to the laws of nature if they’re going to get off the ground, it’s still possible to create flying objects of matchless beauty… says a lot about the inherent beauty of Nature itself.