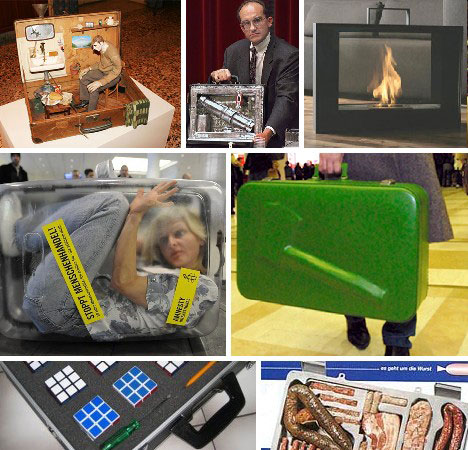 Suitcases, briefcases, attache cases and the like serve one over-arching purpose: keeping what’s inside secure and safe from prying eyes. So just what lurks within some of these sartorial plain brown wrappers? Here are 15 cases that carry more than undies and sundries.

The Case Of The Traveling Speedcuber 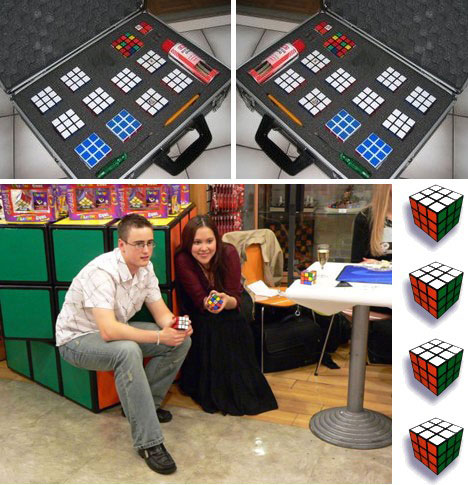 This custom case holds everything a dedicated speedcuber needs when heading out to yet another speedcubing competition: assorted Rubik’s Cubes, cube maintenance tools, spare parts and that all-important can of lubricant. The case pictured above belongs to a Swedish speedcuber who was given the case by his wife’s brother. In related news, a Swedish speedcuber has a wife. 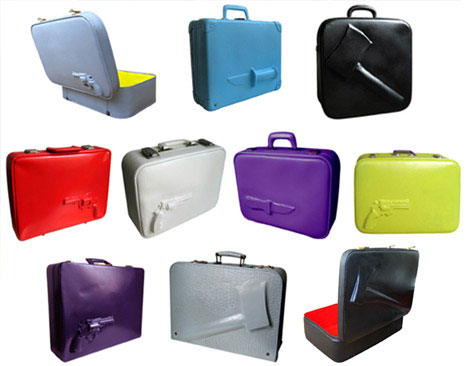 Call it the Anti-Suitcase, and don’t expect to find any one of them at your local Samsonite dealer anytime soon. If anything, these artistic suitcases available for custom order by a French self-described “hippie girl” named PinkWolf may be the ideal choice for those who are afraid of flying – and won’t mind being yanked out of the boarding line by a pair of husky TSA agents. 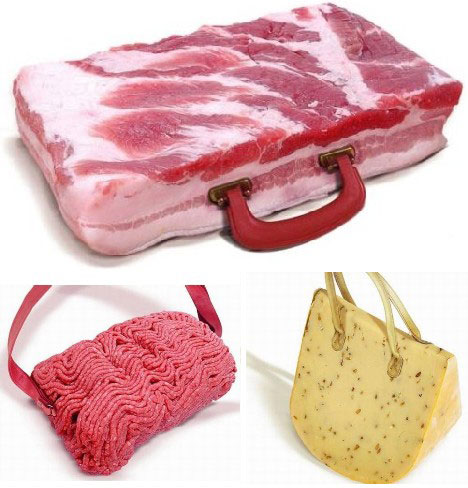 Bender’s disdainful term for humans must have struck a chord in somebody who actually created meatbags… and a cheese purse for good measure. No one will care what you’ve got stashed away inside, as they’ll be too distracted by the outside. Who needs stealth when you’ve got a bacon briefcase? 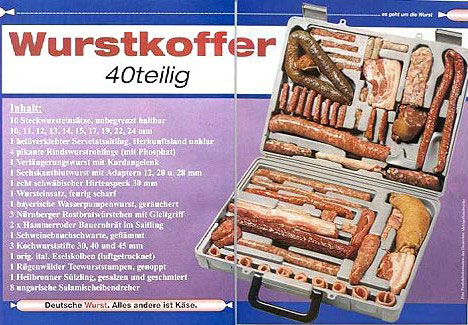 Prefer your meat on the INSIDE of your briefcase? We’ve got you covered… at least, the Wurstkoffer does. This neatly packed sampler of sausages, smoked hocks and other assorted fleisch will keep you from going hungry as you traverse the concrete jungle. The Wurstkoffer may be a mini meat locker of sorts but it doesn’t appear to be refrigerated – if you lose track of it on the subway at least you’ll have no problem finding it at the Lost & Found. 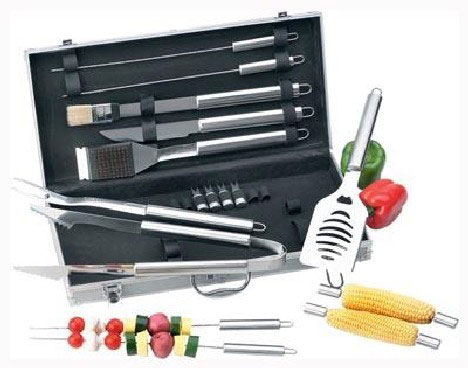 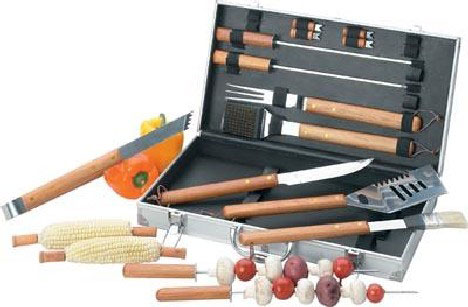 Those who live for the grills of summer make sure the meat’s on the heat and the tools are close at hand – in their own cool carrying case. Chefmaster makes a number of traveling barbeque sets packed in a dedicated case. If it makes you look like something out of MIB, so be it – each case carries enough tools to roast a steer or deliver an alien birth.

A Case Of Race 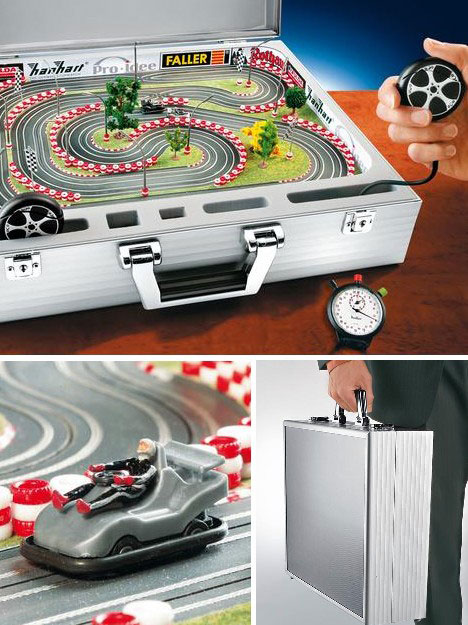 (images via: Autoblog and Pro-Idee)

Briefcase full of blues? Not this one – just the opposite in fact because inside this serious-looking aluminum case is a 6ft long go-kart track, two cars and a pair of wheel-shaped controllers. If George Costanza knew about this he’d have gone to a lot more job interviews. This autobahn-to-go comes from Pro-Idee of Germany, who are now officially forgiven for the Wurstkoffer. 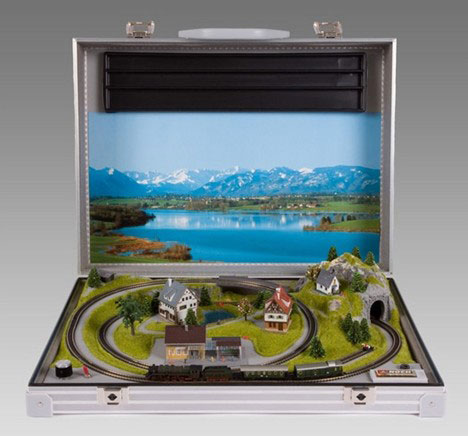 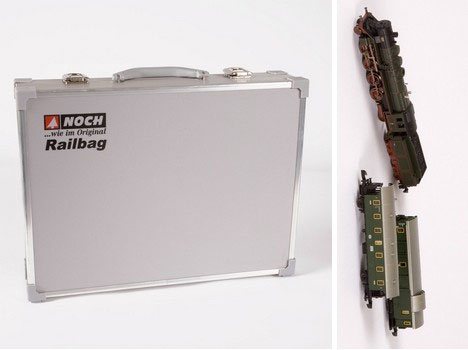 (images via: The Letter and Paul Smith)

Imagine you’re at a boring meeting where everyone including yourself are desperately stifling yawns. Suddenly you whip out your snazzy aluminum briefcase, fling open the lid and… the miniature locomotive inside begins chugging around a landscaped track! That’s exactly what UK businessman Paul Smith used to do when the situation demanded and instead of being offended, his Japanese clients were pleasantly surprised and impressed with Smith’s “personality”. Today Smith offers the Blumenau model train set and all-aluminum Railbag case for just £1,000.00 at his website. Making first impressions doesn’t come cheap, it would seem. 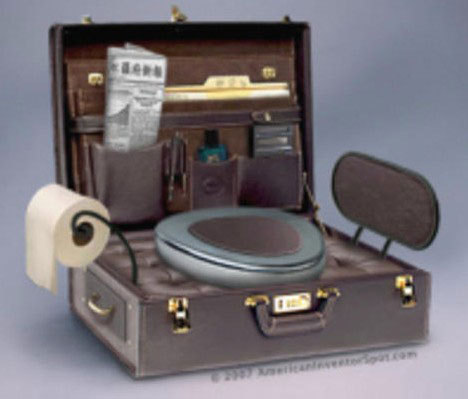 Working a crappy job and taking your work home with you? You’ll need one of these amazing toilet cases then. The first is a design concept that doesn’t leave out any of the bells and whistles – it may even HAVE bells and whistles. 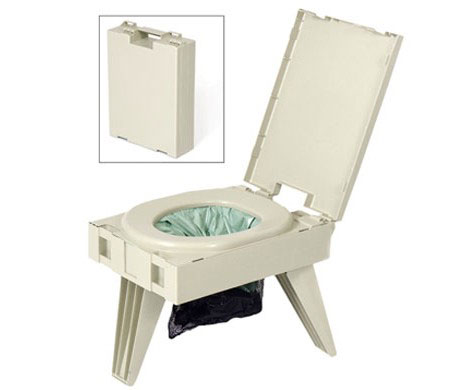 The PETT Dry Toilet proves that the concept of a toilet in a case isn’t just a scatological fantasy. To hikers and wilderness trekkers, “waste disposal” is a serious issue and fully-stocked bathrooms just don’t drop from the sky like in those TENA commercials.

Man In A Suitcase 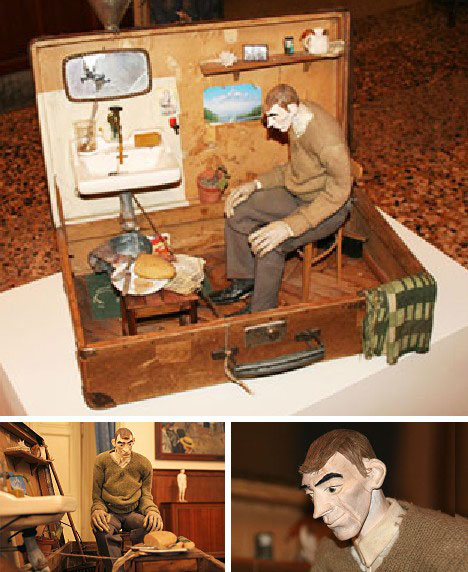 The Police once asked “Why must I be, a man in a suitcase?” Pawel Althamer provided an answer of sorts. Althamer is an artist and sculptor known for his thoughtful yet disturbing self portraits, one of which features himself inside a tiny still-life of a room fitted into a small suitcase. Ideal for all your creepy travel destinations, especially those that entail a night’s stay at the Bates Motel. 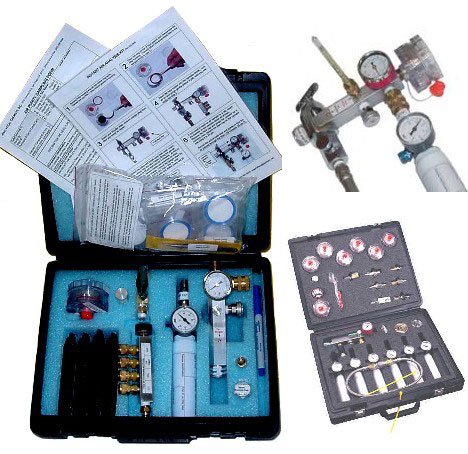 (images via: Oobject and Air Analysis)

Make friends and influence people with the handy dandy state-of-the-art air sampling kit in a case! Just think of it: crack open this baby on a street corner and go through the air sampling procedure – oh yeah, folks are gonna notice. It’s hard to say which number will be higher after an hour, the Ozone reading or how many female phone numbers you’ve jotted down… to notify in case of an air quality emergency, of course. 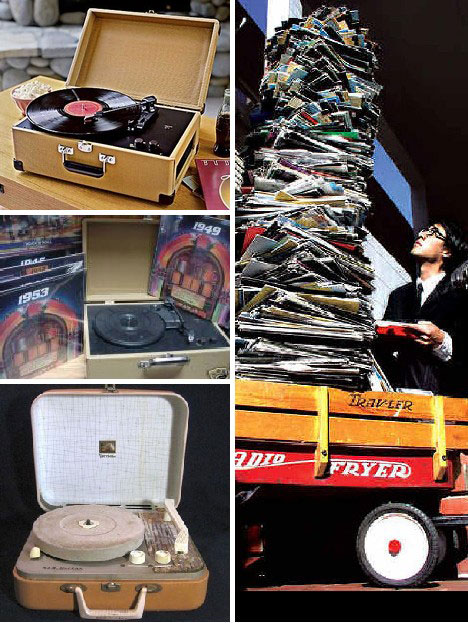 (images via: Nouveau Retro and Press-Enterprise)

For some odd reason, portable record players were quite popular in the decades prior to the introduction of the CD and the Walkman. From heavy top-end turntables down to flimsy Close’N’Plays, one still had to lug along actual records and find a convenient power outlet – not an easy chore if you’re planning a day at the beach. 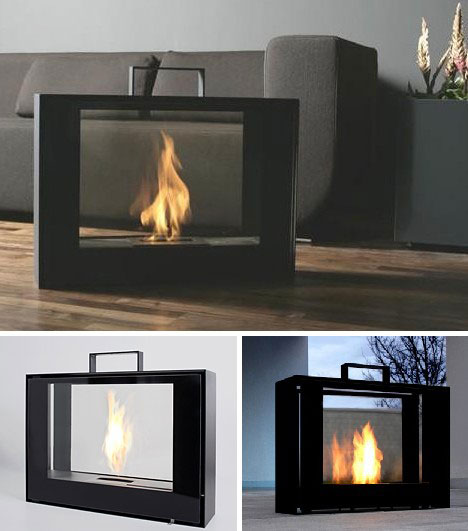 Above is the Travelmate portable fireplace by Conmoto but don’t be fooled by the “Travelmate” moniker… no airline is going to load this into the cargo hold, with the possible exception of pre-1991 Aeroflot. For non-flyers though, the 20″ by 28″ by 8″ device has the potential to turn a humdrum fast food meal into a romantic soiree – champagne and bearskin rug optional. 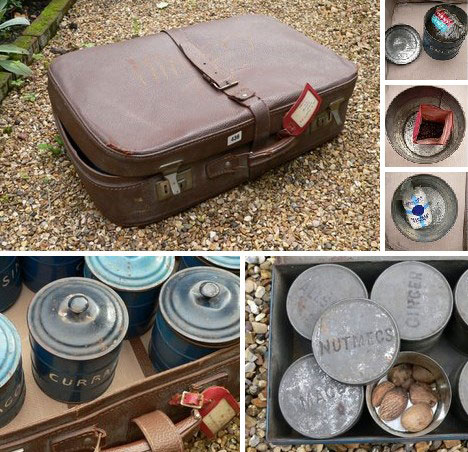 Ever bought an abandoned, unopened suitcase at an auction? Like Forrest Gumps apocryphal box of chocolates, you never know what you’re gonna get. A young lady vacationing in Norfolk, England experienced the thrill of discovery while attending an auction at Burnham Market. She ended up with a battered leather suitcase once belonging to a certain Colonel Hallet. What could the mysterious Colonel have secreted inside the equally mysterious satchel? The forbidden fruits of a jewel heist gone wrong? Bound bricks of Pounds Sterling destined for a double-crossed foreign agent? Turns out the contents were assorted spices in antique storage cans… which just goes to show that sometimes the journey is more interesting than the destination.

The Case Of The Suitcase Nukes 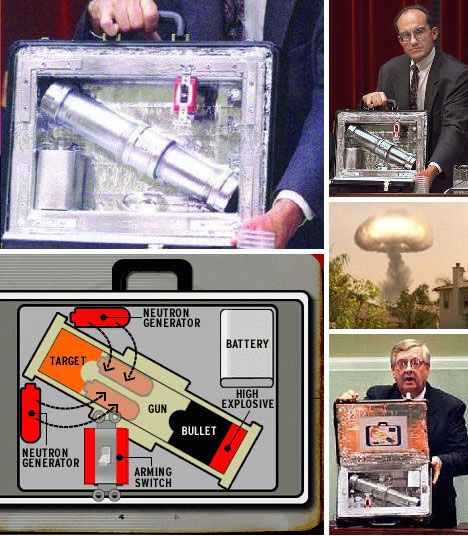 Rumor has it, the Soviet KGB crafted over 100 so-called “suitcase nukes“, each packing a 10-kiloton punch – roughly the size of the Hiroshima bomb. Some say that dozens of these weapons were stolen and sold to America’s enemies following the collapse of the USSR in the early 1990s. Supposedly, the question isn’t “Does Osama bin Laden have nuclear weapons?”, but “When and where will he decide to use them?” In this case, let’s hope the rumors are just that! 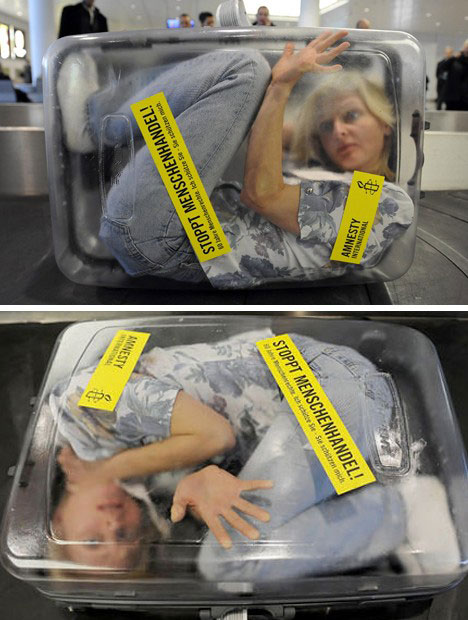 (images via: Daylife and Guerillascoop)

“Stop Human Trafficking! 60 Years of Human Rights,” read the stickers on this most shocking of suitcases. Created by Amnesty International to emphasize the ongoing scourge of human trafficking, this suitcase stunt commemorates the 60th anniversary of the Universal Declaration of Human Rights voted by 58 member nations of the UN in 1948. These photos were taken on a baggage carousel at Munich Airport in Germany, December 11, 2008.

The final entry in this showcase of cases may be somewhat sombre but it reminds us how ubiquitous suitcases, briefcases and other travel cases are in our fast-paced, jet set lifestyles. Those who seek to grab our attention succeed by turning common to uncommon. Case closed!